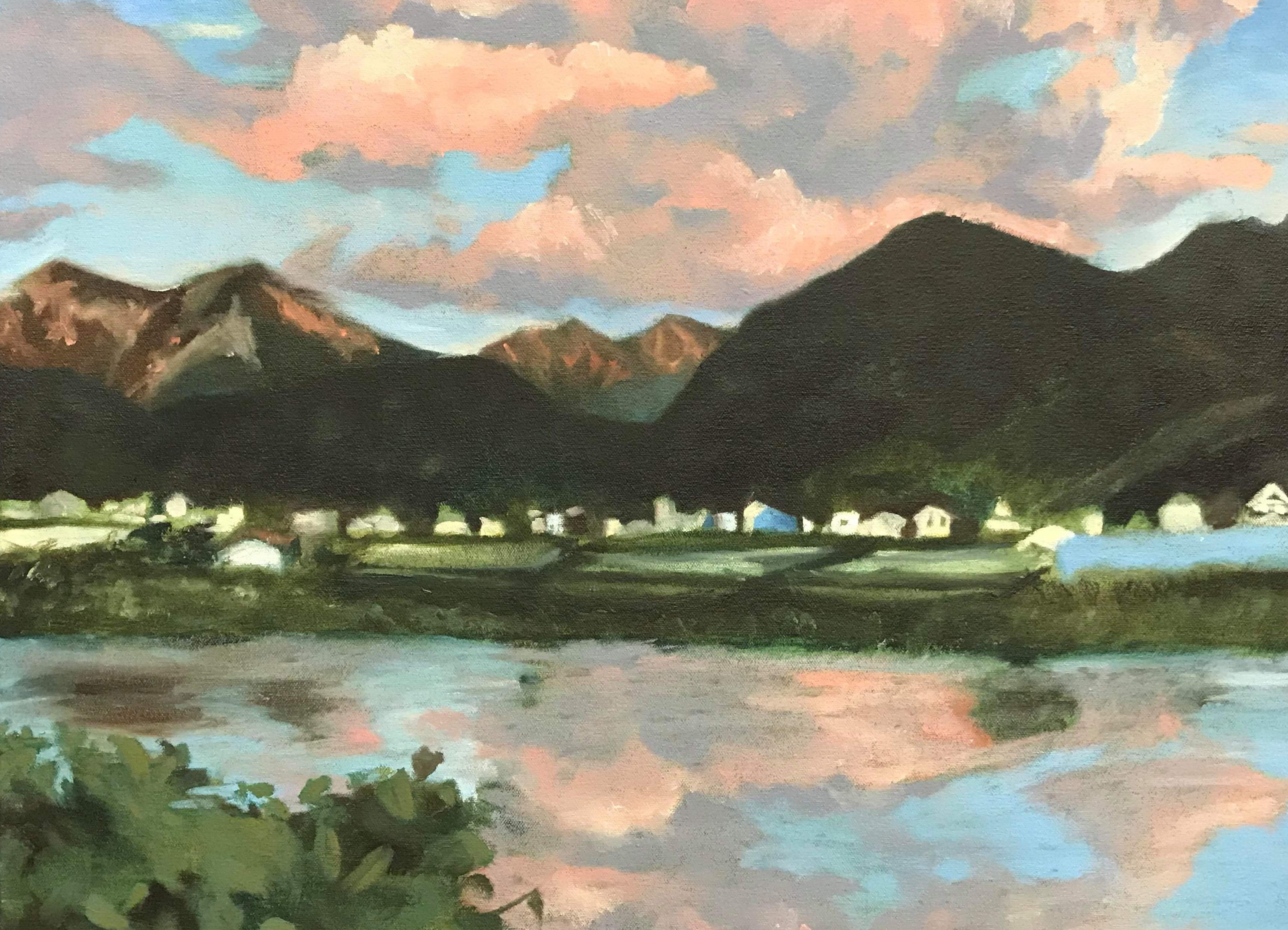 For the May issue, I have interviewed former Hyōgo JET Programme alumnus Emily Riley. We have included one of her short stories based on her time in Japan for you to enjoy, as well as some of her paintings based on her experiences in Japan that feed into her writing.

J: Where are you from, and what were your experiences in Japan?

E: I’m from little old Arkansas. I studied abroad in Akita Prefecture in undergrad and then spent a year in Hyōgo on JET. Wherever I go, there have to be trees!

J: What have you been doing since you left Japan?

E: Now I’m in Iowa working toward an MFA in Creative Writing & Environment at ISU.

E: I have loved reading and writing since I can remember. Creative assignments in elementary were always my favorite, and I think a large part of it comes down to my mother, who always encouraged those things in me. I remember reading Where The Red Fern Grows with her as a kid, both of us balling our eyes out. Also, the conversation style in the South is, I think, very rooted in storytelling and entertainment. Stories feel natural to me.

J: Tell us more about your creative writing work.

E: I read all kinds of things but mostly write fiction, especially with fabulist or fantasy elements. My thesis project deals with culture, mythmaking, and gender dynamics in Bronze Age Greece, exploring the way those things still influence our world today. It’s not uncommon for books in this vein to center on the gods, but I want to take a look at lesser-known characters as well—the slave women and prisoners of war, the ghosts of folklore, and so on. Writing nonfiction came as a pleasant surprise in one of my MFA classes, giving me a chance to reflect on my year on JET in a loose, memoir-like style, which I’ll be sharing a little bit alongside this interview.

J: What sort of things inspire you?

E: Almost anything I can learn about can provide inspiration—other cultures, fantasy worlds, sea life, cooking, and more. I love color, and art has always been a hobby that fed into writing, so I think I find a lot of inspiration there. Inspiration often comes in the form of a haunting—a feeling, scene, or character just won’t leave me alone until I get it on the page.

J: How has your time in Japan influenced your writing or yourself?

E:  Though I avoided the common desk warming situation as an ALT, I also finally had enough time to just write after work, as well as go live a little. With the extra time, I could experiment with writing techniques, explore my process, and generate new material, and I didn’t have to sacrifice sleep to do it. That lifestyle solidified for me an idea of the kind of life I want, making it easier to accept my desire to be a writer despite worries about financial security, day jobs, and more. Of course, a year abroad built my confidence in other ways. My JET experience was the first time I’d lived alone in a new city, and I finally learned to believe I was capable and competent. More importantly, it revitalized my sense of wonder, which is a huge part of my writing.

I think it’s easy to feel like we know our world and the people in it, but there’s a kind of apathy and arrogance in that mindset. When I travel, interactions with the people in town (Japanese and foreign alike) break down that mindset, reminding me how much I don’t know. I always end up meeting at least one person unlike anyone else I’ve ever met, and that gives me hope. That new person is a beautiful part of this world I had overlooked or not anticipated, usually bringing with them a whole world of history, hobbies, knowledge, and more that I feel grateful to learn about and be part of. That effect is multiplied when living in a new place rather than being a tourist there. As cheesy as it may sound, the JET experience gave me strength, and I’m still drawing on it now to get through grad school!

J: What sort of themes or ideas does your work explore?

E: Themes of gender, family and found family, friendship, legacy, and recovery from trauma often pop up in my work. For me, these issues often link with ones of exploration, wonder, and discovery, which means I spend a lot of time worldbuilding. I want to make worlds people enjoy spending time in and introduce characters they can feel for. If someday my writing can help someone see a way forward where they couldn’t before, I’ll feel accomplished.

We have included one of Emily’s flash stories based on her time in Japan for you to enjoy below. Perhaps you can relate.

I always end up meeting at least one person unlike anyone else I’ve ever met, and that gives me hope. That new person is a beautiful part of this world I had overlooked or not anticipated, usually bringing with them a whole world of history, hobbies, knowledge, and more that I feel grateful to learn about and be part of.

There is No Central Heating in Nishi Chūgakkō

It’s not often you can see heat. You might picture a flame or the coils of a stove burning brittle orange, but neither of those examples is exactly what I’m talking about. What you’re really seeing is a flame or an oven coil. They’re both hot, but they’re not heat.

I was in junior high in the early 2000s, that era when stick-like hair and bony legs reigned. Each morning, I needed to make sure the straightener was hot enough before pressing my hair into form, so I’d raise the thing to my nose, thinking I could smell the heat. My friends laughed at me for that—you can’t smell heat, they said.

But I know, without a doubt, that we feel it. It holds us in bed longer than we should stay on frigid mornings, strangles us in summer, and maybe (just maybe) tricks us into thinking we can smell it when it nears our noses.

It was the first day of school after the new year, the biggest holiday in Japan, and the students had gathered in straight lines along the gymnasium floor. It was in another junior high, but this time, I was an ALT attending the opening ceremony for the new semester. Most of us teachers were standing awkwardly around the side and back walls of the room like a bunch of bouncers, but a couple were walking around making sure everyone was in place. The sharpness of their motions and the strictness in their voices surprised me. These were the ones who laughed most loudly in the teacher’s room when someone made a joke. Two girls in the back whispered to one another, twirling their skirts from side to side to muster up some heat, maybe. Despite the 30 or 40 degree Fahrenheit cold and all the knee socks in anime, no one wore anything higher than a crew sock except me. I had knee socks on under my pants because it was winter, and I was still shivering. There’s no central heating in Nishi Chūgakkō.

Since they dealt with the same issue in classrooms, the students were mostly used to chilled fingers and toes, but that didn’t stop them from scooting closer and closer to the space heaters placed around the gym once teachers turned their backs. A little heat was worth the reprimand and a swat back into place. Sometimes, the teachers looked annoyed, but I couldn’t blame the students—I was wearing knee socks under my pants, after all. My too-short pants that were perfect for any other season. My capris that flared out slightly at the bottom instead of blending politely into my knee socks.

When the ceremony finally started, nobody made a peep. I imagined nothing would be worth the humiliation of disrupting the event and getting chewed out, and that was at least part of why all the students faced forward and mouthed along with the school’s song. The teachers did, too, except for me. Except for two lines in the chorus, I still didn’t know the words yet. Of course, the easiest way to tell if someone was actually singing was to watch for a little steam rolling out from their lips as though from a snoozing dragon, the puff changing direction with the shape of new syllables (and those are the motions I went through to pretend like I did know the words, the shape of “watermelon watermelon” filling the air). So. You can see breath in cold air, but that’s not heat either.

Windows almost larger than cars lined the top of two tall, parallel walls. Higher even than the balcony on the gym’s second floor. Great blocks of light fell from the set on the left, outlining row after row of heads in bright halos, which was still not heat. In the path of one of these light blocks rested one of the coveted space heaters. The floor behind it danced. Something that I couldn’t see cast a shadow. An invisible force vibrated and shifted, and it probably always is, without our knowing, an underground performer of this sort. When I looked closely, the very air around the heater danced. Something about the light reflected that movement.

And this, I thought as I rubbed my hands together, is seeing heat.

Emily Riley is a JET alumnus who was in Hyōgo prefecture from 2018-2019. She is a current student at Iowa State University pursuing an MFA in Creative Writing. In addition to reading and writing, her hobbies include art and travelling.

Jessica is a fourth-year American JET from Arkansas state now living in Saitama. She is the Art Section Editor for CONNECT. On weekends, she enjoys hiking in remote areas of Saitama or taking day-trips to Tōkyō. When not adventuring, she can be found reading or creating her own artwork, which can be seen on her Instagram
@jessica_craven_art.