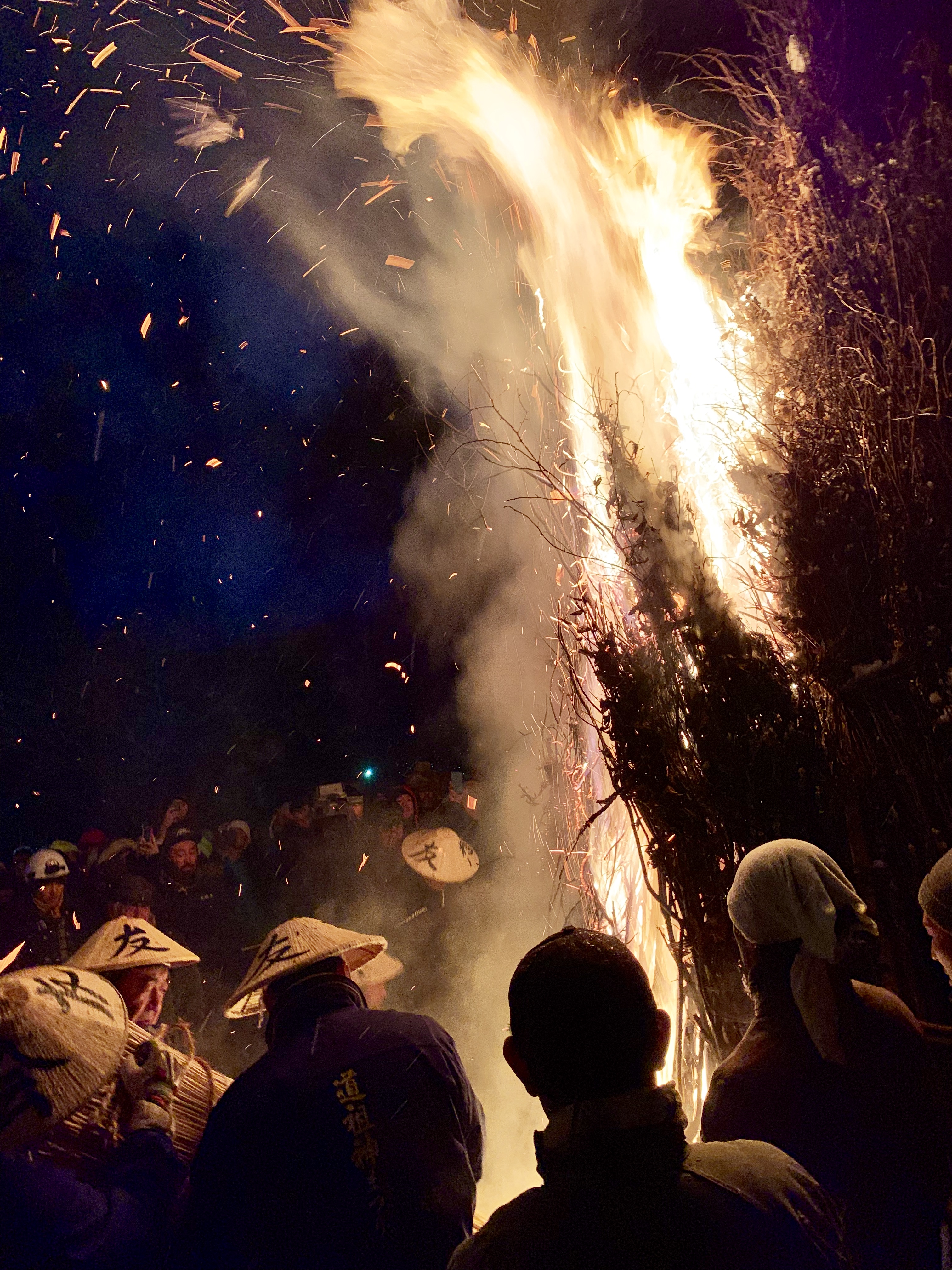 This article originally featured in the January 2022 issue of Connect

Japan hosts many great festivals year-round, and fire is a key element in many of them. The ski resort village of Nozawa Onsen holds one of the biggest: the Nozawa Onsen Dosojin Fire Festival, or Nozawa Onsen Dosojin Matsuri for short. In something called a “fire-setting” battle, villagers fight to light or prevent the lighting of a huge effigy of wood to get rid of bad luck and bring in good fortune. Kono Katsuyuki, a native of Nozawa Onsen, tells us more.

Thank you for your time Mr. Kono. Could you tell me a little about yourself and Nozawa Onsen village?

My name is Katsuyuki Kono and I was born and raised in Nozawa Onsen. From the age of 15, I spent five years living in Austria where I trained as a ski racer. Nozawa Onsen has a unique tie with St. Anton in Austria as its sister village and young local skiers still go back and forth between the two.

Currently, I am running the Shirakaba hotel and rental shop as the third-generation owner, as well as the restaurant that we opened in 2015, called Shichirohei, which is next to our hotel and offers a great selection of natural wines and a menu based on local and home-grown produce.

Could you tell me a bit about the origins and reasons behind the Fire Festival? Why do the people of Nozawa Onsen celebrate it?

The festival dates back to before 1839, which is the year that the earliest records of it begin.

It is a celebration of the Dosojin deities of Nozawa which are believed to ward off plague as well as bring about prosperity in marriage and child-bearing.

Traditionally, locals would celebrate the birth of the first grandson to their household with a lantern bearing the grandson’s name during the festival. Today, it is no longer exclusive to the eldest grandson but celebrates the birth of all children whilst wishing them a prosperous and healthy future.

Playing with fire during the festival sounds exciting and a little dangerous. Is it safe during the Fire Festival?

Using fire is a traditional part of Japanese festivals and common across many regions. In Nozawa, we seem to have a particular attraction to it, and our Fire Festival is one of the country’s three biggest and most famous.

It is safe and as a spectator there is nothing to worry about, though the younger men do sometimes get a few burns here and there.

What are the major events of the Fire Festival? I heard there’s a “fire-setting battle?” Have you also participated in the festival before?

The Fire Festival takes place on the 15th of January each year. The key players on the day, and in the build-up, are the 23-year-old and 39 to 41-year-old men in the village. This is because these are the two stages of bad luck, or yakudoshi, that men are believed to go through in their lifetime. One of the main purposes of the Fire Festival is to rid these men of their bad luck. Yakudoshi for women are the ages of 19 and 33. In both cases they are simply unlucky years in a person’s lifetime.

There is one other major event that takes place two days prior, which involves dragging two trees from the mountain through the village. These are the very trees that are used to build the shaden the following day, on the 14th of January, using only ropes.

As for my own experiences, I was the first son of my family, so my name was up on one of the lanterns during the festival, back when only the birth of the first grandson of the family was celebrated. When I was 23, I was still ski training in Austria; January is a busy time with important ski races and training. I came back to Nozawa to participate in the Dosojin Matsuri though, as that was my priority.  I came away from the Fire Festival with no burns whatsoever. At the time, that was considered quite an embarrassment.

The festival sounds very intense and busy. What kind of preparation work goes into setting up the Fire Festival every year?

Preparation for the festival begins in May of the previous year and involves all of the men in the village. The older of the two groups previously mentioned organises all of the age groups below them. In the preparation phase, men will often prioritise the festival over their day jobs. This is considered a given from birth for all men in Nozawa.

The preparations begin with gathering the materials used to build the main towers, called the shaden, followed by some tree-cutting and rope-making and much more. All of the traditional decorations are hand-made each year so it requires a lot of intense labour and time.

We also have a lot of meetings throughout the year that involve a lot of sake drinking. This is when the stories and experiences of the older men that have been through it all are shared with those of us that are going through the preparation process.

Are visitors outside of Nozawa Onsen allowed to watch and even participate in the Fire Festival? Even foreigners?

Yes, in non-COVID times the event is open to the public and attracts many foreign and domestic tourists each year. Everyone, including foreigners, is welcome to watch and enjoy the atmosphere but participation is limited to villagers.

What do you think are a few other things that visitors should know about the Nozawa Onsen Fire Festival and Nozawa Onsen village?

For those visiting Nozawa Onsen for the Fire Festival, I would recommend coming from the 13th of January to see the build-up to the main event on January 15.

Besides the Fire Festival, skiing and snowboarding are a must in Nozawa Onsen, which has some of the best powder snow in the country.

There are plenty of places to eat and drink in the village, all within walking distance from the ski resort, as well as some cultural spots including the ski museum and shrine.

“Onsen” is the Japanese word for “hot spring” so taking a dip in one of the 13 natural hot springs dotted around the village, all of which are open to the public, is one of the main attractions here.

The spring water in Nozawa is famed for being especially clean and good for drinking. There is a virgin beech tree forest on the mountain that filters the water which comes down to the village for us to drink, cook with, use in the rice fields, and bathe in. The superior quality of our water is also what makes our local sake, Mizuo, so tasty.

I’ve travelled to many different countries but I can say with confidence that Nozawa is a truly unique and special place.

Kono Katsuyuki was born in Nozawa Onsen as the oldest of three sons to a ski racing and resort family. He has skied in Alaska, Norway, Iceland, and the European Alps, and he dreams of becoming a professional snowboarder someday. He also enjoys mountain biking, road cycling, fishing, and bouldering in and around his mountain home of Nozawa Onsen. He’s currently in charge of running his family’s Shikaba hotel, rental shop, and restaurant[https://bit.ly/3EN5Rky]. Hisvision for Nozawa Onsen is to make it the world’s best mountain resort.

Marco Oliveros is a fourth-year ALT and the current Culture Section Editor for [CONNECT]. He likes history. He lives in Tokushima. He’s a little scared of fire, but he looks forward to watching a Japanese fire festival someday.