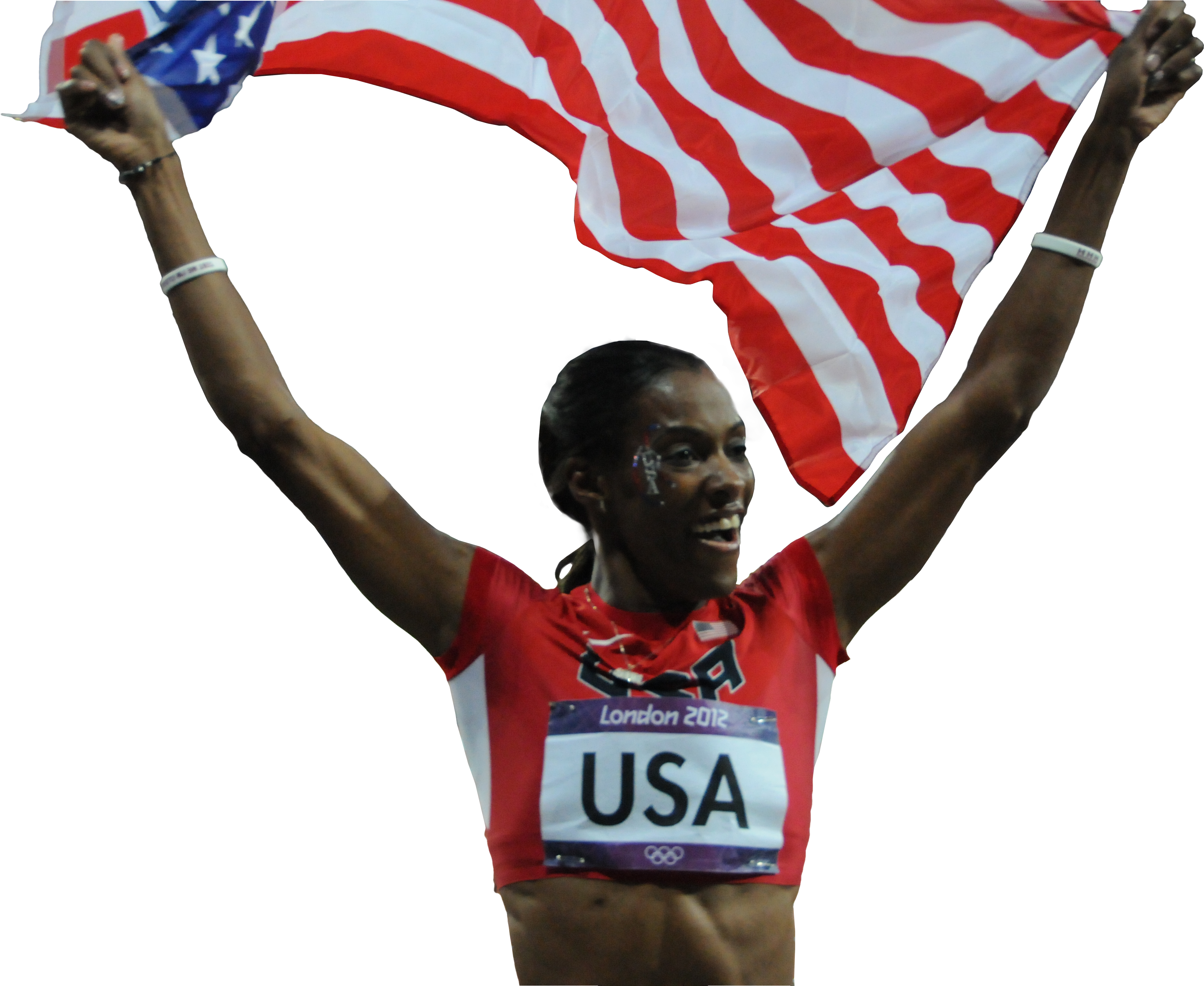 DeeDee Trotter represented the United States at three Olympics (2004, 2008 and 2012) in track and field, earning three medals (gold in the 4×400-meter relay in 2004 and 2012 and a bronze in the 400-meter dash in 2012). Currently, she works as a motivational speaker and has visited numerous schools in Japan. She is also an Education First (EF) Tōkyō 2020 Olympic Project Ambassador.

I interviewed DeeDee Trotter in March 2020, prior to the Tōkyō 2020 Olympics postponement.

How did you become the EF Tōkyō 2020 Olympic Project Ambassador?

Back in 2016, EF was looking to hire an Olympic gold medalist. Someone from the EF office in Boston was a fan of mine and she had someone from EF offer me the job. At the time, I was not really interested in taking the position because I had several coaching offers on the table. But to be honest, I wasn’t interested in coaching right out of track. I decided to take them up on the offer and within about six months, I moved to Switzerland, where I stayed for about a year and a half working remotely from the Zurich office. During that time with EF, I completed 128 events worldwide.

What does being the Olympic Project Ambassador entail?

It’s really a fancy name for a brand ambassador. I do some brand ambassador recognition work for them. I’ve created the position to fit my skills and talents, which is basically motivational speaking. 95% of the time, I am doing international motivational speaking work at schools, universities, and corporations. Most of the year [2019 and 2020 pre-COVID] was spent in Tōkyō because the Tōkyō office was really interested in making sure that Japanese residents had an opportunity to connect with the Olympic movement and what better way to do that than to introduce them to an Olympic gold medalist—and let their younger generation be inspired and motivated to not only engage in the Olympics but also to achieve their dreams and goals.

I am a full-time motivational speaker—that’s my title when I speak of myself.

In your speeches, what has been the general message that you’ve conveyed to students?

My message is geared towards helping them understand how to use power. I help them see that powerful forces are at work all around them every day. They have to start recognizing that power is in their life and all they need to do is utilize it. I do that by explaining my pillars of power—which are pressure is power, positivity is power, confidence is power, progress is power, and belief is power. I use my story to highlight how these things became powerful forces in my life and that I’m not a super special individual. Every single person in this world has access to these forms of power. My story resonates with them.

By the time most people walk out of a session, they feel like they can use power in their life a lot more efficiently. They also leave with a powerful motto that I’ve created, “I can. I must. I will!” This is the motto I’ve lived by. I started using this motto in 2011. It became the center of my power and the core of my motivation. I now instill that same motto into every person I talk to. That is what most people connect to.

What was your experience being in Ōsaka in 2007 for the World Championships like?

Ōsaka quickly and easily became one of my favorite places in the world. It’s not because Ōsaka was a super cool city or anything like that—it is a cool city, but that’s not what compelled me to feel that way. I consider Japan to be one of the top places to travel to in the world. I put Ōsaka on my list because of the people. Ōsaka has the nicest people in the world by far. I don’t know why they’re so friendly. I don’t know why they’re so happy. Whatever it is, it’s memorable.

I’ve also ran in Yokohama and Tōkyō. As an EF ambassador, I’ve traveled to many cities—Nagoya, Kyoto, Sapporo, Okinawa, Fukuoka. I’ve lost count of all the cities I’ve been to at this point. I just love a culture that has such high respect for all the people, for the planet, their health, living creatures, etc.

[The Japanese] respect people’s space and quiet. It’s quite refreshing coming from the U.S. where everything is always kinda loud and hectic. It’s kinda contradictory because Tōkyō is such an exciting city—13 million people. There’s always a lot of things going on, but it’s a cool balance of respect and quiet all tied into one place.

I read that Japan gave you your most interactive food experience. Do you have a favorite Japanese dish?

I’m a fan of yakitori but I would say my favorite dish is something that I had for the very first time in Sapporo: soup curry. I love that stuff and I dream about that meal. I’ll make an extra trip, I’ll ride a train for an hour if I have to. It’s pretty popular in Sapporo. One of my friends told me it’s a specialty there.

After your serious knee injury (Trotter underwent major surgery after the Beijing Olympics), did you have any concerns?

Yes, three years of concerns. I didn’t bounce back from my surgery very quickly. It took three years of failure to actually come back from that in-jury. It was not a quick rebound. I lost every race I run outdoors. I basically had no contract left and my back was against the wall. It was do or die, all or nothing. At that point, it was “You better find a new way to win” because the old way isn’t working any more. So through some mental training—“I Can. I Must. I Will!”—and finding a new way to rebuild the confidence that I lost from all those years of losing—losing physically, losing mentally, losing emotionally and losing money and contracts.

A lot of loss occurred over those three years. Those losses take away from your confidence and your belief in yourself. You might be physically ready to run again but mentally, you’re just trashed. So the biggest hurdle that a lot of athletes and people struggle to overcome is that they don’t realize while they were going through a difficult time, their confidence takes a huge hit. You have to work on building that back up just as much as building your body. I had indirectly, unknowingly neglected the mental element of repairing myself. In 2012, it became apparent to me—I was shown this gap and then, I was led to understand what it took to fill it. I put together a mental training strategy that allowed me to not only make the 2012 Olympic team when nobody thought I would ever make another team. I came back and I made the Olympic team, and on top of that, I won two medals at the 2012 Games when most people didn’t expect me to be there.

You can believe everything is possible but getting it takes a little work, patience, and determination.

Who helped you with the mental aspect of your career?

When I think back to that time frame, there weren’t a lot of people who believed in me. When you have three years of losses under your belt, you don’t really have a fan club. People were thinking I should retire. I had a few people that are never going anywhere—my coach, Caryl Smith Gilbert, who is also the head coach and director of track and field at the University of Southern California. She’s always been there. My brother Yohon Trotter is my undying fan. I could literally have one leg and one arm tied behind my back and he’s like, “She’s gonna win.” He really doesn’t do doubt—not when it comes to me, anyway. He is always there. But really, I built this mental regimen from my own personal experiences. I didn’t know it but at the time, I was building the next stage of my life, which is motivational speaking. I was in a mindset of how do I get back to the old me when I was fearless and courageous.

You can believe everything is possible but getting it takes a little work, patience, and determination. So how do you get back to that mental state? I just started to relive every step I had taken and I really just can’t help but express that the only way it could come about was through prayer and my belief in God because you pray for what you need and what I needed was a way to become mentally stronger. I really don’t want to take credit for somehow having the ability to just come up with this amazing strategy that would ultimately be the stepping stone for life after track. I would like to think I was that clever but I also know I prayed for it.

So the biggest hurdle that a lot of athletes and people struggle to overcome is that they don’t realize while they were going through a difficult time, their confidence takes a huge hit.

What are you looking forward to most about the Tōkyō Olympics?

The thing I’m most curious about is on top of the 13.5 million people Tōkyō already has, is how we plan on cramming a few more in there. I’m really interested to see how Tōkyō hosts such a prestigious event.
If anyone can do it, they can do it. I think that’s the thing that is most intriguing to me now.

As far as sports go, I’m obviously a little biased. I’m looking forward to track and field. And there’s some new stuff that has come up, like surfing and some other events, which I think is pretty cool.

Finally, what has been your most memorable Japan experience?

I would say doing a workout session with the Navy Command Fitness Group. That was something I don’t think I will ever forget. Being able to be Coach Trotter out there for all the Navy men and women. It was really awesome, and some of their families came to that workout session as well. The base track team was there, and it was a super day.
Also, one day, we did a workout session at Ōsaka City Sumiegaoka Junior High School and I kinda correlated the message that I was telling [the students] about believing in themselves and speaking over negativity with positivity, while encouraging them with my motto “I Can. I Must. I Will!” And I took them into a fitness session that forced them to rely on the skillset and motivational message I taught them. They did extremely well. They made me so proud. I had to brag about them all over my Instagram.

I won two medals at the 2012 Games when most people didn’t expect me to be there.

Rashaad Jorden, who conducted this interview, was a two-time JET—first in Yamagata Prefecture from 2008 to 2010, and in Kōchi Prefecture from 2018 to 2010. During his JET experiences, he completed the Tōkyō Marathon in 2010 and the Kōchi Ryōma Marathon twice, 2019 and 2020. He also served as the General Sports Editor for CONNECT from September 2019 to July 2020.

email
From the Magazine, Lifestyle, Sports