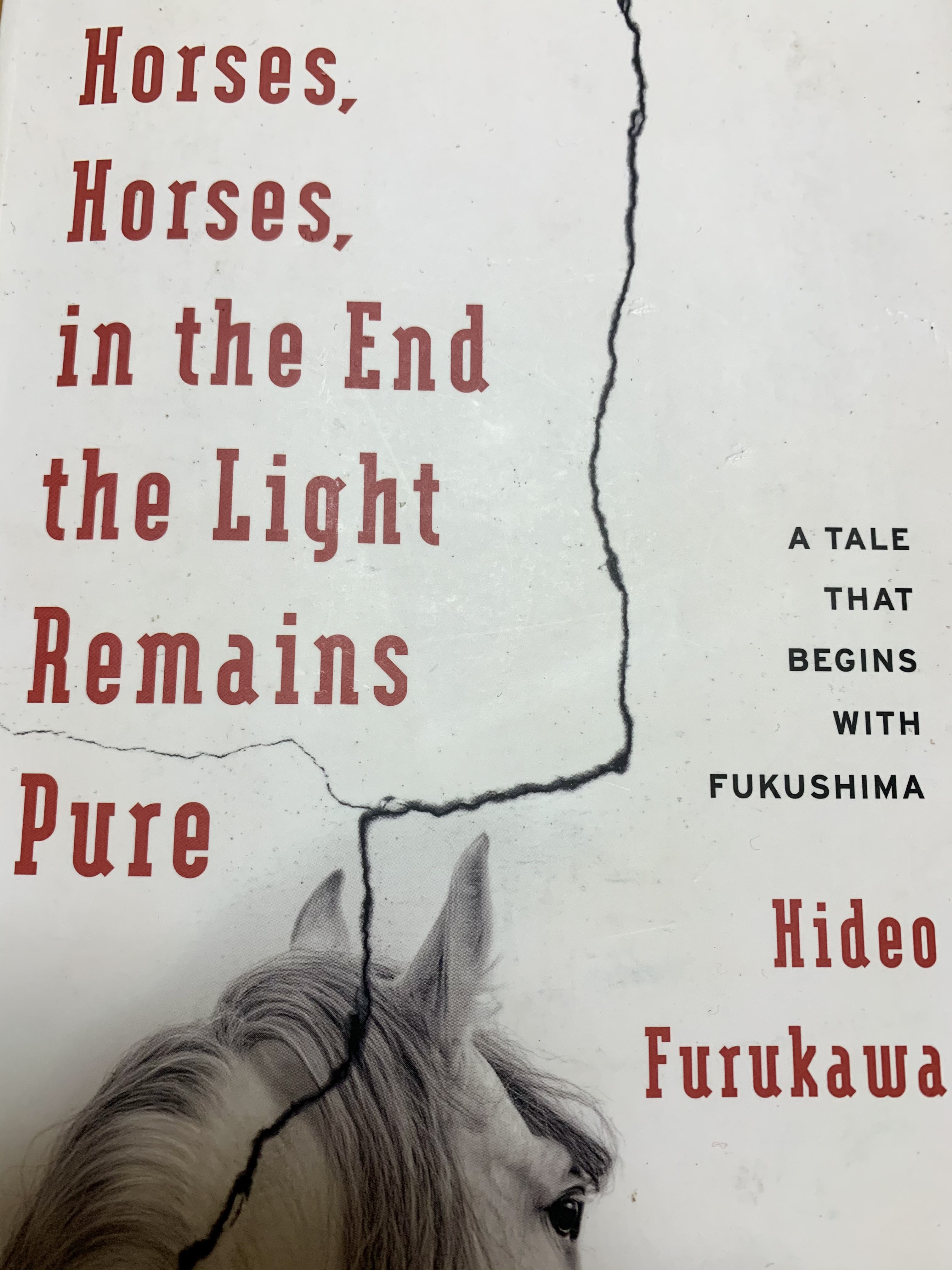 10 Years of Cultural Responses to the 3.11 Disaster

In the passage to the left, Fukushima-born author Furukawa Hideo attempts to put into words his experience of the days and weeks following the Great East Japan Earthquake and Tsunami, which struck the east coast of Japan’s Tōhoku region on 11th March 2011. In the chaos that followed what has come to be known as ‘3.11,’ Furukawa recalls experiencing “seven days like half a year, three months like a few seconds,” as he struggles to come to terms with post-disaster reality.

Ten years on, and the scale of the damage caused by the 3.11 disaster is still just as difficult to process. We now know that the magnitude 9.0 quake, along with the devastating tsunami that it triggered, resulted in more than 18,000 deaths, with roughly 2,500 people still missing. Whole communities along the coastline of Tōhoku’s Iwate, Miyagi and Fukushima prefectures were wiped out by the 40-metre high tsunami waves. More than 80,000 people were evacuated from the environs of Fukushima Daiichi Nuclear Power Plant, which was sent into meltdown by the tsunami, and some 5,000 people still remain displaced from the area. (1) 3.11 was the most damaging natural disaster to strike Japan in modern memory.

However, statistics only tell part of the story. The impact of 3.11 extends far beyond the loss of property and human life. The disaster occupies a unique position in Japanese history because it happened during the media age. The waves of the tsunami, and the destruction they brought with them, were broadcast in real-time on television sets all over Japan. News crews from every corner of the country flooded the disaster zone, and Japanese news outlets and social media platforms were saturated with 3.11-related information for weeks and months afterwards.
Thus, although it goes without saying that the eastern Tōhoku region was by far the worst hit, 3.11 was a disaster experienced by the nation of Japan as a whole, together. It left the population with what literary scholar Linda Flores refers to as “cultural trauma”: an inability to process the sheer scale of the damage, and fear for what the disaster would mean for the future of Japan. (2) This feeling of impossibility and incredibility is well summarised by Furukawa’s experience of “spirited-away time.”

One of the results of this cultural trauma was the establishment of a new, “post-3.11,” genre of Japanese literature, music, and art. Over the past decade, artists and authors alike have used this genre to somehow express the inexpressible loss incurred by Japan at the hands of the disaster, as well as critique the government’s response to it. On the tenth anniversary of 3.11, it seems fitting to take a look at some of the best cultural works that have come out of this movement so far.

As you may have gathered already, I am a big fan of Furukawa, and his novella about the aftermath of 3.11 was actually the first work of Japanese literature I ever read. Horses, Horses is an intertextual muddle of Furukawa’s first-person stream of consciousness and the history of Tōhoku, told through the eyes of the wild horses of Sōma, a town located within the evacuation zone of Fukushima Daiichi. A Fukushima native and advocate for Tōhoku rights, Furukawa uses his prose to highlight the injustice of what he considers to be the sacrifice of Tōhoku at the hands of Tōkyo and the central government.

Kawakami wrote her original short story, Kamisama (“God Bless You”) in 1993. It is the tale of a nameless, human protagonist who is invited on a short stroll by a “bear god” that has recently moved in next door. The plot is very simple (if a little absurd): the two characters take a walk by the river, have a picnic, hug, and then part ways. Kamisama 2011 is Kawakami’s reimagining of the story in a post-3.11 context. The story is almost identical, except the narrative is peppered with references to the Fukushima nuclear disaster: protective clothing, Geiger counters, the “incident.” The changes are subtle, and that is exactly the point. The 2011 version is a poignant reminder that, post-3.11, even the most everyday activities, such as taking a walk by the river, have been fundamentally, and irreversibly, changed. The story also offers an ecocritical approach to the dangers of nuclear power, and a reminder of the interdependence between man and nature.

You can read both Kamisama and Kamisama 2011 here.

For an insight into the long-term societal impact of 3.11, I highly recommend this 2019 novel from zainichi Korean author Yū Miri. Although not written specifically about the disaster, the story shows just how far-reaching the impact of the 3.11 was, ultimately linking it to the large homeless community in Tōkyō’s Ueno Park. The tale follows the life of Kazu, from family man in his native Fukushima, to labourer in Tōkyō’s 1964 Olympics to, following 3.11, homeless outside Ueno Station. Similarly to Furukawa’s Horses, Horses, this story highlights the Japanese government’s neglect of Tōhoku’s residents in favour of economic progress for Tōkyō, emphasising the endless struggle between the collective and the individual that underpins much of modern Japanese society. It also touches on the anger felt by many at the government’s decision to host the 2020 Olympics, at a time when many disaster victims were still without homes.

Photojournalist Kazuma Obara was the first photographer to publish work from inside the Fukushima Daiichi Power Plant, in his 2012 photobook Reset Beyond Fukushima. His work focuses on the forgotten victims of the disaster, namely the power plant workers and their families. Obara travelled into the evacuation zone soon after the disaster to meet and photograph employees of Fukushima Daiichi who were working at the time of the meltdown, and find out how the disaster had impacted them personally. The result is a series of strikingly raw portraits, which serve to personalise the disaster, as well as offering a rare insight into the internal goings-on of a nuclear power plant. Obara’s use of overexposure to represent radiation in his photographs is also very impactful; his “Exposure” project, based around Chernobyl, is also well worth looking up.

You can find out more about Kazuma Obara’s work here.

The coastal town of Ishinomaki in Miyagi Prefecture accounted for almost 20% of all deaths caused by 3.11. The town’s infra-structure was obliterated by the tsunami, and most survivors either lost a loved one, or know someone who did. In order to commemorate the lives lost and look forward to a brighter future for the town, Reborn-Art Festival was launched in 2017. The festival features works of art from both Japanese and international artists, including a striking sculpture of a white deer, which looks out across the sea, seemingly searching for missing tsunami victims. The second festival was held in 2019, and also featured music and local food. The next festival is scheduled to be held in 2022, and you can find out more about it here.

There have been many, many musical tributes to 3.11, and it’s incredibly difficult to choose just one to mention here. However, a project that touched me especially was the Fukushima Youth Sinfonietta, which was founded in the wake of the disaster. It is an orchestra made up of school students from Fukushima Prefecture, with the aim of showcasing the healing power of music and bringing the community together after the suffering of 3.11. Not only does the group’s story offer some well-needed hope and positivity within the post-3.11 cultural movement, I think orchestral music also holds a special kind of power when it comes to expressing emotion, whether that be grief or hope. The Youth Sinfonietta has released a special video in memory of the ten year anniversary of 3.11, which you can view here.

Of course, these picks are only a very small selection of the vast number of cultural works that have come out of 3.11 in Japan. The post-3.11 genre is constantly growing and evolving and, during this tenth anniversary year, I would urge everyone to take some time to explore it.

Alice French is a second-year Coordinator for International Relations (CIR) from Cambridge, England, based at the Prefectural Office in Yamagata. When she is not singing in the shower or taking pictures of sunsets for Instagram, she can be found hiking or skiing on one of Yamagata’s many mountains.