Forging something from scratch is never a simple endeavor, but for Rob McManmon, building a business comes as easily as breathing. As a serial entrepreneur who founded everything from phone-repair businesses to a bike resale outfit in his early years, coming to Japan and building a biking company was simply the next logical step. After graduating from the Eastman School of Music in upstate New York, he came to Ōta, Gunma Prefecture in 2003 and began teaching music at Kokusai Gakuen Academy. Still the mountains and handlebars continued to call to him, and he soon pivoted away from the classroom to focus on the open road. Heading up Bike Tour Japan, Rob now leads a passionate group of tour guides from their offices in Kiryū City.

We lead “off the beaten path” cycling tours that center around premium stays and accommodations. That means we don’t focus on the typical tourist areas like Tōkyō, Ōsaka, and Kyōto. We want to show people the side of Japan that is often neglected by the typical tour packages. This country has so much rugged, natural beauty, and we feel the best way to present that to people is on the saddle of a bike. After beautiful rides through the Japanese countryside during the day we unwind and indulge in the exquisite luxury of traditional Japanese inns at night.

How did you get started with business?

During my time teaching at Gunma Kokusai, I spent a lot of time exploring the nature surrounding me on my bike. I enjoyed the teaching but it wasn’t where my passion truly lay. I’d often ride for hours to new places on the weekends and then return to Ōta on the train. After returning to the U.S., I spent time in California leading bike tours there. So I learned a bit about the business and thought I might be able to replicate something similar back in Japan. The thing was, I found myself constantly dreaming about Japan and the nature there, and I just couldn’t shake it. That’s how Bike Tour Japan was born.

What kind of effect has COVID-19 had on your work?

Covid really changed our timeframes and what we now consider reasonable growth. Though we’ve had to push some of our more ambitious plans back, we plan to start expanding to other areas in Japan, even as far as Hokkaido. We are also planning to launch ski bike tours soon. They are hybrid tours where we’d offer 4 days of world-class skiing in Nagano followed by 4 days of biking back in warm Gunma. There’s a lot in the pipeline at the moment, and we’re confident that once things return to normal we’ll be able to launch these initiatives. 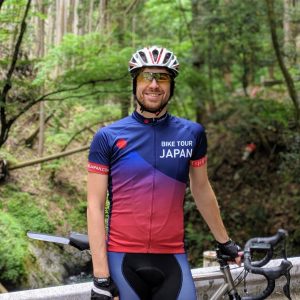 COVID really changed our timeframes and what we now consider reasonable growth. Though we’ve had to push some of our more ambitious plans back, we might start expanding to other areas in Japan, even as far as Hokkaidō. We are also looking into ski bike tours that are hybrid tours at the moment, where we’d offer four days of world-class skiing in Nagano followed by four days of biking back in Gunma. There’s a lot in the pipeline at the moment, and we’re confident that once things return to normal we’ll be able to launch some of these initiatives.

During a normal year, I spend literally 120 full-days on a bicycle. That’s one third of the year outside, on a bike and doing what I love doing. But I love every minute of it. Not just the riding, but the planning & guiding as well. For every single itinerary I have spent literally dozens of hours planning and looking at maps to determine what the best routes and ryokans would weave the perfect trip.

Any words of advice for people looking to break into your industry?

It’s incredibly important to find a niche, especially in Japan. Believe it or not, the adventure-tourism industry is actually a very mature one in Japan, so anything that sets you apart will be of benefit. For us, our niche is nature plus luxury. Also, it’s super important to leverage what you’ve already got. I started small and looked at what I already had in terms of inventory and assets. We did eventually partner with a local company, but I never actively sought outside funding. You want to be able to retain control of the business, and learn how to scale organically. Also, I’d try getting some experience doing smaller ventures before breaking into Japan. You’ve got to have an idea of what you’re getting into; entrepreneurship isn’t for the faint of heart. Still, if you can manage to find that niche and grow sustainably, you’ll definitely succeed.

Rob McManmon is the founder of Bike Tour Japan. He is driven by curiosity and the desire to create unforgettable cycling trips for BTJ guests. He loves surprising travelers with unique and immersive experiences that exist just outside the international hubs of Tōkyō, Kyōto, Ōsaka and Hiroshima. In addition to creating intimate adventures throughout Japan, Rob also previously worked with Duvine Cycling in Northern California. When he is off the bike, he enjoys teaching classical guitar to students around the world.