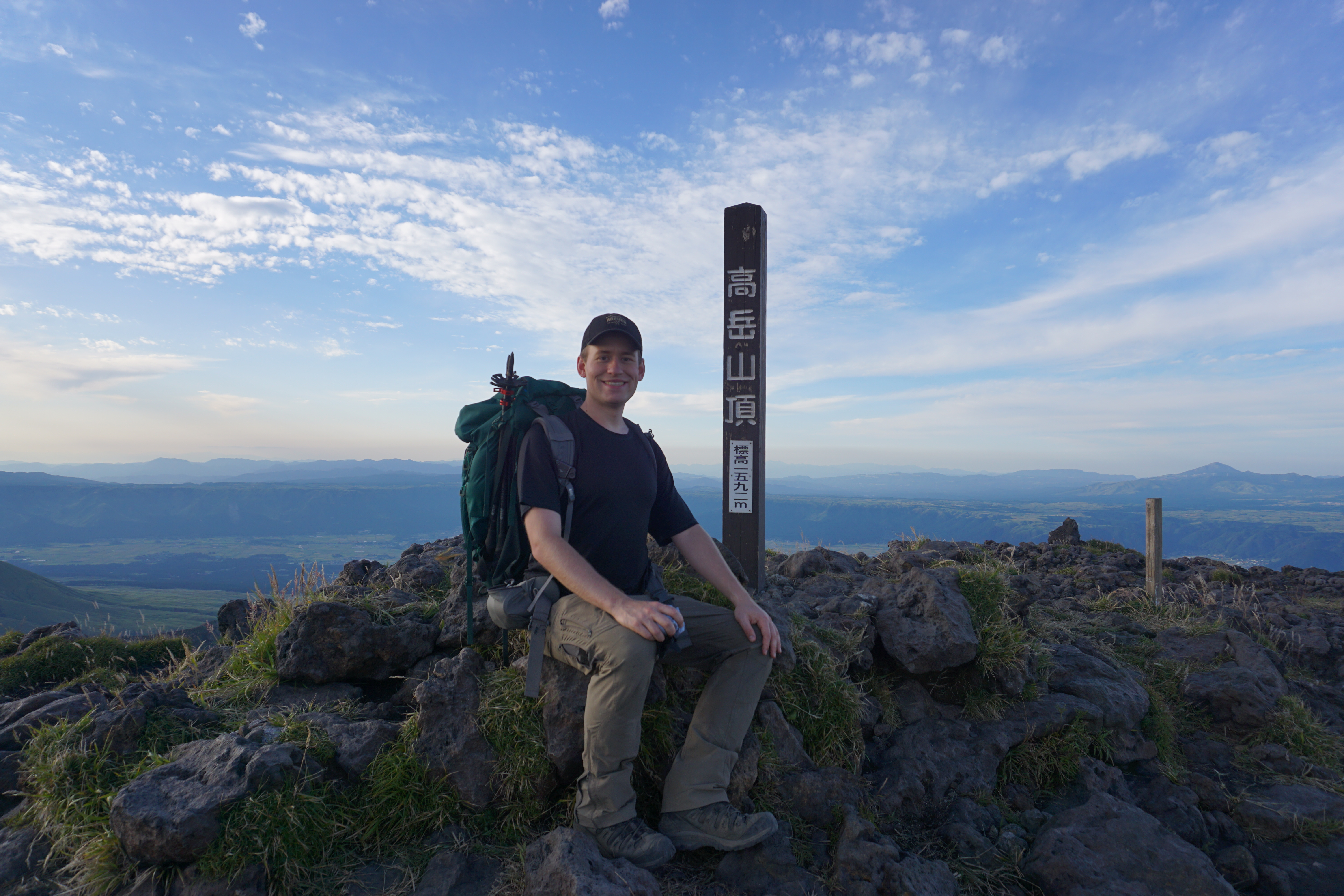 For some people, the word evokes images of blackened craters spewing forth glowing lava. For others, perhaps titanic mountains crowned with shimmering snow and glaciers. Either way, volcanoes are known as uniquely powerful places.

As a child, I loved volcanoes. Be it papier-mâché mountains exploding vinegar and baking soda, or the exotic locales featured on National Geographic, they fascinated me. Maybe this isn’t so strange; Washington State is overshadowed by no less than five volcanoes. Still, my love for such mountains didn’t reveal itself until much later, after I had graduated college. At the time, I was struggling with finding a direction in life. I had recently gotten into hiking, and I decided to try climbing to clear my head. In an ironic twist, my first major summit was none other than Mount St. Helens.

For those unfamiliar, Mount St. Helens was the crown jewel of Washington State. Nearly a perfect cone volcano, it was known as ‘the Mount Fuji of the West’. I say ‘was’ because in May 1980 the mountain erupted in the largest landslide in recorded history with the force of hundreds of nuclear weapons, absolutely devastating the surrounding region. It was a place of death and destruction. But, where there is death, there is also life.

When I visited, life had already emerged from the ashes. Trees and grasses had begun to regrow, and the shattered mountain was graced with beautiful wildflowers emerging from the rubble. Even from the summit, which yawns open like the broken ribcage of a giant, there is still life. Far below, the rumbling of the mountain’s heart can still be heard. Be it the sense of adventure, the magical rebirth of the land, or the rumbling of Helen’s heart; I was truly enthralled by the mountain. In short order, I began to climb and explore other local volcanoes, seeking out their own fascinating stories.

When I was selected for the JET Program and placed in Fukuoka, I was initially downcast. Kyūshū didn’t strike me as a serious place for hiking, and I feared that there wouldn’t be much here for me. I was very wrong. Instead, Kyūshū has some of the most fascinating mountains in Japan. Of these, Mount Aso is the most intriguing, and I had the privilege of visiting the mountain this year.

The first thing that sets Mount Aso apart is its size. Unlike traditional volcanoes like Fuji and Rainier, which tower thousands of meters over the land, Mount Aso is a short and squat volcano more reminiscent of a large hill. As my climbing partner and I descended from some steep cliff roads into the valley surrounding the mountain, I was surprised by the geology of the place. In many regions, volcanoes are surrounded and attached to other mountains. Aso, on the other hand, sits right in the center of a flat valley plain filled with beautiful green fields and pastures.

Further up, we entered some forests on the flanks of the mountain, but it wasn’t long before we once again broke into fields and beautiful crater lakes.

As we approached the visitor’s center, we discovered that the park was temporarily closed, and for a good reason. Mount Aso, being one of the most active volcanoes in Japan, periodically erupts white clouds of toxic sulfur dioxide. While the levels of gas reaching us at the center were very low, it was extremely painful. Have you ever inhaled water by accident and felt a raw and unpleasant scratchy feeling in your throat? The miasma emitted by the mountain caused a similar effect. Fortunately for us, after about a half-hour of waiting, the gas dissipated and we were clear to proceed to the crater itself.

Because it was a beautiful day, we opted to walk to the crater. The path there offered a lovely vista of green fields highlighted by black volcanic rock. It also gave us our first encounter with a series of large concrete bunkers that provide shelter from flying volcanic rocks. Facing south to avoid gas and ash, this last line of defense offered a sober reminder of Aso’s deadly fury. This need was emphasized by a nearby boulder that had smashed the path after being hurtled over 500 m from the crater.

When we reached the parking lot, we joined many others on the fenced edge of the crater. Below the fence lies a deadly but beautiful turquoise blue lake from which clouds of gas boil forth. It might seem silly, but the plain white clouds felt malevolent and claustrophobic, especially with how fast they could materialize. The crater might be clear one moment, and if you looked away and then back, it would be filled with toxic clouds hundreds of meters high.

From the observatory, we made our way to the east along a series of boardwalks. The boardwalks guided hikers to a nearby trail, and as we walked, we were impressed by the fields of obsidian black volcanic sand and debris. According to the park, the area was a relatively small and unique biome known as a “volcanic desert”, a dead place inhospitable to all but the hardiest of plants. Spherical “lava bombs” could also be seen littering the zone. After some time, the black sand gave way to grassy hills and grey rocks.

The hills towering over the Aso crater revealed some interesting secrets. Mount Aso’s crater has actually shifted over time, and there are now about a half dozen extinct or dormant craters lining the area. As we walked along the ridges to the east of the volcano, we were able to see a number of these places. Eventually, we made our way to a summit overlooking the primary crater.

In my experiences climbing and mountaineering, I have been exposed to a number of dangers, including avalanches, rockfalls, and giant glacial crevasses. However, nothing I have ever experienced has been as scary as this. The final part of the path was in a direct line less than a thousand meters from the active side of the crater. As billowing white clouds outlined the area, we made the decision to cautiously proceed with other hikers through an open but potentially dangerous zone. As I did so, though, I was faced with the unpleasant reality of how much our safety relied upon the direction of the wind, something which I constantly checked. Indeed, shortly after we arrived, we heard evacuation alarms blaring and warning those south of us to evacuate the observatory we had visited earlier.

After briefly reaching the main overlook, we retreated to a safe distance well out of the gas zone and proceeded to climb the tallest peaks overlooking the area.

As we looked across Mount Aso and the verdant valleys surrounding the mountain, I was impressed by the scenic views. Something in the beauty, though, made my blood run cold. While there are pretty pastures and fields surrounding Aso, there are also distinct cliffs that neatly mark the edge of the surrounding valley. I knew the reason why, but it was hard to comprehend the scale in person. You see, while the volcano belching gas in the center of the park is Mount Aso, there’s another Aso. The Aso Caldera. The large volcano belching smoke is, in reality, a pockmark on the face of a gigantic supervolcano. The structure is so large it could easily swallow Mount Fuji! Needless to say, it was a sobering lesson on the power and scale of nature.

In the end, Mount Aso was not what I expected. Short, squat, and billowing white smoke, it appears far different than a classic volcano. But Aso is not a place to be judged by its cover. Rather than being boring or small, the volcano is a colorful place full of vibrant life, fascinating secrets, and unique hazards.

If you ever find yourself in Kumamoto, you should definitely check this mountain out!

Mark is a second-year Fukuoka ALT hailing from Snohomish, Washington, USA. Aside from the adventures of being an ALT, he enjoys mountaineering, cosplay, and photography.