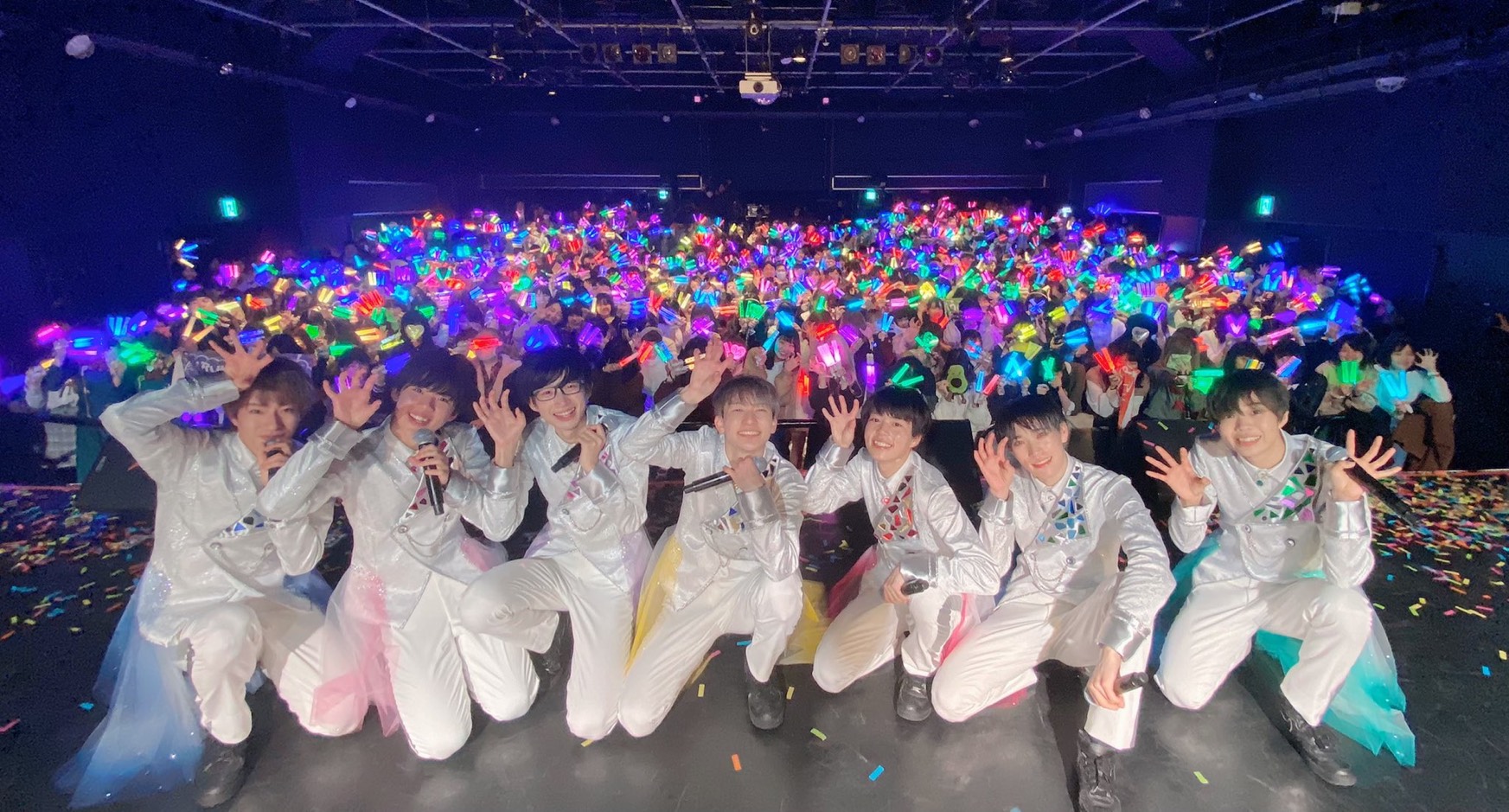 Unless you’ve been living under a rock for the past few years, you will most likely be aware of the phenomenon that is K-Pop. Korean pop groups — also known as K-Pop idols — such as BTS, BLACKPINK and IZ*ONE have become so famous all around the world that even my retired 67-year-old father back in the UK is at least aware of their existence. However, even though most of you reading this are either living in Japan, have previously lived in Japan, or have very strong ties to Japan, you are probably less aware of J-Pop idols.

In the most basic terms, “idol” refers to almost any pop music performer in Japan. They can be a soloist or in a group, male or female, and with the rise of “virtual idols” through anime such as “Love Live”, “Idolmaster”, and “Idolish7”, they don’t even have to be real people anymore. Most idols are managed by a production company and the vast majority of idol production companies in Japan will only manage either male or female performers; unlike in Korea, in Japan it’s extremely rare for male and female idols to be managed by the same company.

Even if you aren’t fully aware of them, idols are a staple of Japanese culture. If you live, or have ever lived, in Japan, then I can guarantee that you have heard an idol song or seen posters of idol groups somewhere around. Even as I’m writing this, one of the biggest groups in the country, Keyakizaka46, has a promotion going on in Lawson stores. Just last week I heard a song by BEYOOOOONDS, a group who debuted in 2018, in a bakery when I was buying my breakfast. If you spend any time in Tokyo then you may see members of indie or underground idol groups handing out flyers to promote their performances. You really can’t escape idol culture.
I’ve been following various J-Pop idol groups since I was 11-years-old, initially discovering a group called Buono, who recorded many of the opening and closing songs for the anime “Shugo Chara”. After looking up their music videos on YouTube (and probably annoying the life out of my parents by attempting to copy the dance moves every night, when I should have been asleep), I also discovered many other J-Pop idol groups who were managed by the same company as Buono. The name of one of these groups, Morning Musume, may ring a bell as they are one of the most famous groups in Japan. Watching these 10 (at that point) girls smiling and singing and dancing just made me really happy. Their songs were catchy, their dancing was amazing, and their energy was infectious.

I was hooked, and my bank balance has definitely suffered for it ever since

I went to my first idol live (the more commonly used term in Japan for a concert is a “live”) back in 2017. It was in Paris, when legendary idol group C-ute were disbanding and performed two overseas lives to say goodbye to their fans: one in Mexico and one in Paris. The atmosphere was electric, with the room filled with fans from all over Europe as well as Japanese fans who had come over for this unique experience. The venue was an explosion of colour, with fans holding their penlights aloft and calling out fanchants in complete sync with one another.

I should probably go over some basic terminology here. Penlights are battery-powered glowsticks which you can change the colour of with the push of a button. In almost all idol groups, each member will have a specific colour associated with them, and you show your support for your favourite member by having your penlight set to their colour. So if your favourite member’s colour is red, then you’d turn your penlight red.

Fanchants are another staple of idol lives and probably one of my favourite things about them. This is when the fans all sing, shout or chant together before, during or after a song. This can range from simply calling out your favourite member’s name, to joining in with some of the lyrics, to full on raps that only the fans do during the bridge of a song when the members are doing a dance break. It can be pretty impressive to witness.

I was lucky enough to attend five different idol events in Europe between 2017 and 2019, and since coming to Japan I have been attending idol events almost religiously at least a few times a month. Like I said, my bank balance has suffered. The groups that I support, however, have changed a bit since I was 11. While back then I mainly supported girl groups like Morning Musume and C-ute, I’ve now joined the other camp and mainly support male idol groups. The specific groups I like are slightly more underground than the huge names of Arashi or King&Prince, but to me that’s part of the appeal. With the more famous groups, you can watch them perform live and see their videos online. Once in a blue moon, they’ll do a handshake event or a cheki (photo) event with fans, but for the most part you’ll be one face in a crowd of hundreds or thousands.

However, with my “boys” (as my friends call them to bully me), they actually know their fans’ names and remember things about them.

mesemoa, one of the groups i support, has 9 members and they all know my name, they know i’m an alt in yamagata, and they know i’m originally from the uk

I have inside jokes with some of them and silly dance moves that I do with others. The 7 members of PandaDragon, my favourite idol group, also all know my name and random things about me, like who my favourite member of the group is or the fact that I love Disney. The members of the one girl group I do still actively support, BANZAIJAPAN, even know things about my family and ask after them when I see them. More underground idols can have much more personal relationships with their fans, which is partly what has drawn me to them.

Plus, their songs are hella good. Go look up “Disorderly Crowd” by MeseMoa and just try and not bop along.

Honestly, being a foreign fan helps a lot. Just by virtue of me being a foreigner I am probably much easier to recognize and remember, not only by the idols themselves but also by other fans. And fans are where this can get a little complicated. I have had nothing but good experiences with other fans at idol events, even with the language barrier, and I’ve made a lot of friends at events. However, and they will be the first to admit this, Japanese idol fans can be straight-up crazy and slightly terrifying at times. Getting tickets and merchandise can be a bit of a bloodbath, and at the events in Europe I did see some Japanese fans take advantage of the fact that the European fans weren’t entirely sure of what was going on in order to get merchandise before them or get better seats for the concert. However, honestly, those situations have been few and far between. What’s happened more often is I have been very well looked after by Japanese fans at events, if they have ever seen me looking lost or confused. Every time I go to a live, I come home having made a new friend. MeseMoa, PandaDragon and the other groups in their company (Daredemo Dream, or DD for short) also have a thriving online community with both Japanese and overseas fans sharing art, videos, memes, and just generally screaming about our favourite members on Twitter.
Of course, recently, I haven’t been attending live concerts for a rather obvious reason. The COVID-19 pandemic has meant that all concerts and other forms of live entertainment have ground to a halt all over the world, and Japan is no different. MeseMoa were meant to have a nationwide tour starting in March and ending in a huge concert at the end of August at Pacifico Yokohama. Their entire tour was cancelled which, for a fairly small company, could easily have been financially devastating, what with venue cancellation fees and refunding tickets.

Unable to hold any concerts, MeseMoa’s company, which consists of four male idol groups and a training program with a further 10 members, came up with a few ways to keep the lights on as well as keeping their fans engaged. From live streaming concerts with no audience and minimal staff to having phone and video calls with fans, to creating new merchandise to sell, they have enabled fans to continue to support the idols who mean so much to us without putting our health at risk.

And it’s not just DD — idol groups all over the country have been doing similar events with live broadcasts and phone calls. Some groups with smaller fanbases, like the aforementioned BANZAIJAPAN, have started doing live performances again with limited numbers of tickets being sold, mandatory social distancing and mask-wearing, and no meet-and-greet at the end like they would usually have. Sadly, as these events are in Tokyo, it will be a while before I’ll be able to go back to the lives that I love so much!

Idol culture isn’t perfect. From idols being under love bans (not allowed to have a boyfriend or girlfriend), to fans crossing the line and being very inappropriate toward or even stalking members, to scandals where idols can get fired for doing something seemingly trivial, there are a lot of things that could and should be improved here. I’m lucky that the groups that I support are under a small company where an ex-member of MeseMoa is actually the company president, so they are managed, in my opinion, much more fairly than bigger companies who heavily restrict what their idols can and can’t do.

Even so, idol fans all over the world are going to continue supporting the performers they love so much because, in the end, it’s an escape. Idols sing and dance to make their fans smile and forget their problems, at least for a little while. Some idols join groups when they’re just teenagers and fans get to see them improve and grow. Seeing them overcome their struggles can really help these fans to overcome their own hardships.

From me dancing around in my bedroom to the Shugo Chara opening at 11-years-old, to me singing my heart out with 800 other MeseMoa fans in Osaka in December last year, idols and their music have certainly got me though some of the most difficult times in my life. I’ll always be grateful for the positive impact they’ve had and will continue to have on me, and however far into the future it may be, I’m looking forward to the day when I can go back to a live in person and cheer with all my might for those wonderful performers on stage.

Vikki Evans is a second-year ALT from South-West Scotland, living and working in Yamagata City. Most of her time is spent screaming about idol boys and watching Disney, but she also makes odottemita dance videos, which you can find here.