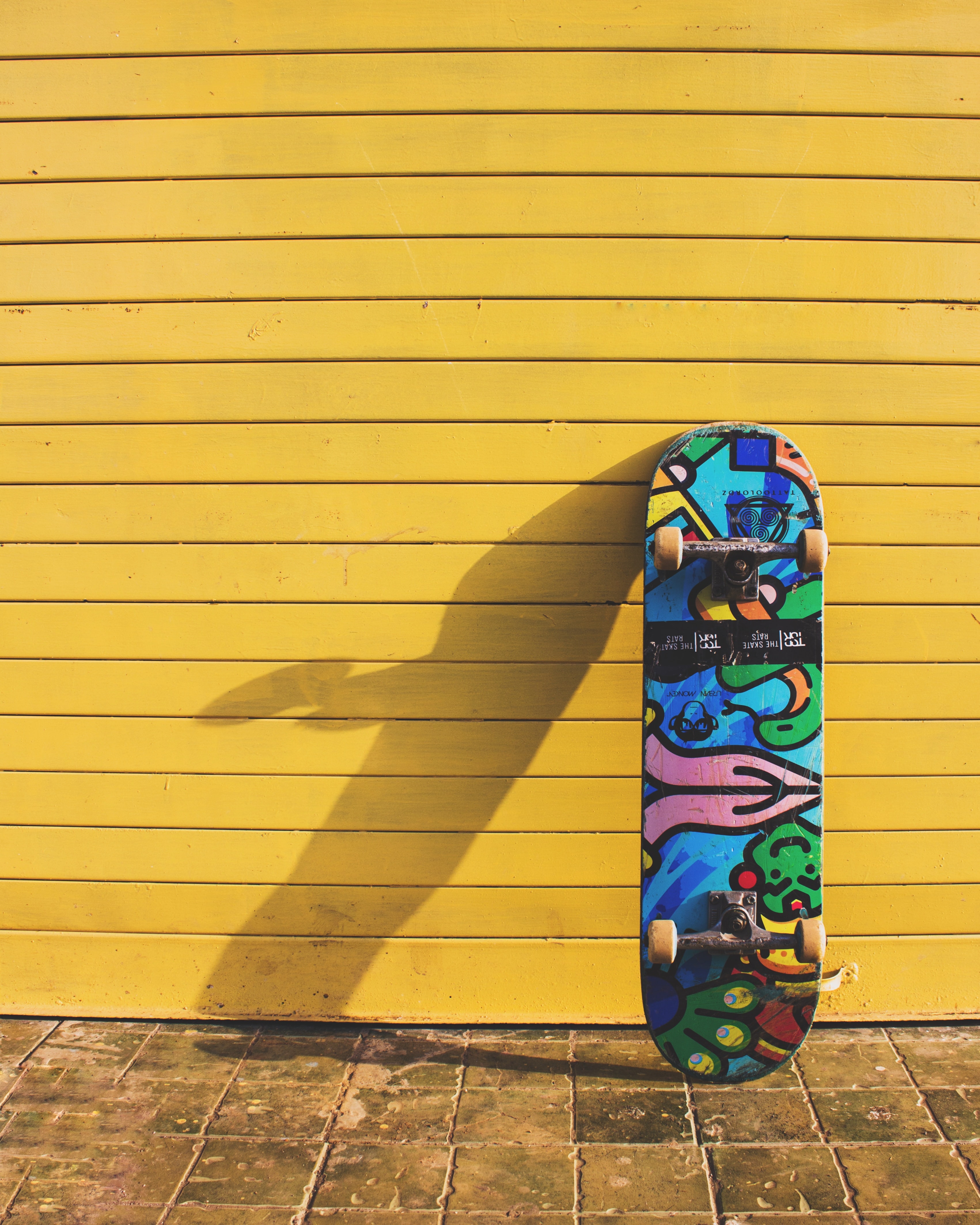 Skateboarding and Connection in Tokyo

At Komazawa Skateboard Park in the middle of a blistering Tokyo summer, groups of tired people took refuge in whatever shade they could find. Some sipped Pocari Sweat under a little gazebo. Others rested under a crop of trees or a wall casting shadows. Sounds of metal crashing into metal cracked through the thick air. Yips and yells rang out. T-shirts draped over a black, chain-link fence, and most people cruised around with backs glistening in the hot sun. There was no breeze that day, and heat stroke was something people warned about. But the skateboarders kept rolling until the sun went down.

ll over the world. It’s a concept originating from the belief that a skateboard creates a shared experience across borders and cultures. There is some truth to that idea. Skateboarding occupies an ambiguous space between physical sport and creative expression. On one hand, riding a skateboard requires a lot of coordination and, like other sports, the ability to master certain skills that show whether someone is talented. However, unlike a lot of other sports, there isn’t a consensus of what those skills are, as there are as many ways to judge a skateboarder’s ability as there are skateboarders. So while people all over the world might be riding the same piece of wood with wheels, what’s considered cool can change depending on the place, person, time, etc.

Exposure in a New Media Landscape

Japan’s skate scene has recently entered the international limelight, especially with skateboarding securing a spot in the (now postponed) Tokyo Olympics. For many years, the industry was US-centric, with pockets of skaters coming from places like Europe, Brazil, Canada, and South America. Now, that scope is widening. Like for many industries, the internet and social media has upended long-held notions of normalcy. Gone are the days where a handful of US companies dominated the market. With their print media almost eliminated (the only remaining large publication being the well-known magazine Thrasher), skate companies have moved marketing directly to their audience. This meant smaller companies could, in theory, reach the same amount of people as the bigger brands via Instagram. Companies from all over the world have gained larger followings, due in part to featuring professional skateboarders in their advertising.

This is true for Japan as well. Social media has greatly increased visibility for the skate scene and skaters. People like Horigome Yuto and Sanbongi Shin are household names in the skating world, in part because of their large followings on social media. Larger companies have been taking notice of their popularity as well. In January 2020, Nike’s SB division released a video titled “Wamano” that features only Japanese skateboarders. 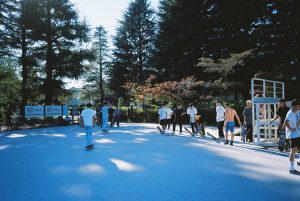 The starting point for most skateboarders is a skateboard park, and Komazawa serves as a hub for skaters in Tokyo. It’s free to use, more centrally located than a lot of other parks, and built well. Komazawa’s two box-shaped obstacles and three ramps are certainly minimal in terms of skatepark design, and if judging on construction alone, Komazawa can be considered decent. But Komazawa, like most skateparks, can’t be judged exclusively by design—its true value can be found in the role it plays in the community. As the skateboarding spot that’s closest to central Tokyo, it’s where many skaters congregate.

Being an area to congregate is almost as important as the construction of the skatepark itself. If skateboarding straddles the line between creativity and sport, then one of the reasons it does so is because of the communal nature of the activity. For a lot of skaters, hanging out is as much a part of skateboarding as riding a skateboard. It’s not uncommon to see someone so focused on a trick that they become the target of derision. “They’re so serious” might not seem like an insult, but in an environment dedicated to an act of play, if someone looks like they’re not having fun, that’s strange. The skatepark allows people to practice their skills, but it also provides a place for the community to come together. It’s for letting out a “yeee” when someone performs a trick they’ve been trying over and over again. It’s for giving high fives and for cracking a cold drink when it’s time to relax after a long day. 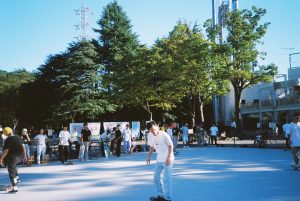 an enjoyable experience, but in the streets, skaters must use their imagination to turn a man-made object into an obstacle that can be used for skateboarding. If they can pull that off, the tricks and obstacles produce an expression of vivid creativity.

The skatepark might fulfill the role of a gathering spot but often, the essence of skating is still in the streets for many skaters. It’s where they can take what they’ve practiced and apply it to any obstacle. The obstacles at a skatepark are carefully crafted to provide

However, unlike a designated park for skateboarding, the legality of skating in public and private areas is complicated. Cruising around Tokyo, you might find beautiful marble ledges or staircases that seem tailor-made for skateboarding. But just like in other countries, skateboarders face resistance. For as long as skaters have imagined tricks on objects that don’t belong to them, there have been people who have objected to such acts on their property. This is apparent in Tokyo as stories about run-ins with authority figures abound. Japanese skaters attempting to ride around a busy central area of Tokyo could be subjected to a trip to the local police station, a strip search, and questioning. For foreign skateboarders, the consequences of performing tricks where they’re not supposed to seem milder. They might also get a free ride, but to their place of residence with a slap on the wrist. While confrontations like these do occur, it’s more common that skateboarders are asked to leave shortly after arriving at a spot. Just the sound of wheels on the ground might send a security guard running.

Skateboarders tend to be strong-willed; it is almost a necessity considering they fall repeatedly until a successful trick is performed. This tenacity extends to finding ways around people who might object to skateboarding. For a long time, Japanese authorities captured video of skateboarders riding around at night because the early morning hours offered the only reliable reprieve from security and the police (check out one of the videos of Miyagi Gou from the late aughts to see floodlights illuminating various street obstacles in the middle of the night). This is still largely the case in the center of Tokyo. Skaters wishing to cruise around Shibuya or Harajuku without obstruction will have to wait until after the last trains have departed. For those who prefer the daytime, travelling to quieter areas around the city can prove successful as the relatively empty streets provide greater skateboarding freedom. 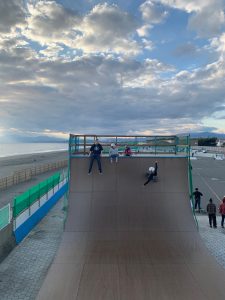 The dubious legality of skateboarding has placed it somewhere between being a shunned subculture or being a selectively cherry-picked mainstream trend. Walking around Tokyo, it probably won’t take long to spot someone in Supreme, Palace, or Thrasher-branded clothing (all companies with roots in the skateboarding industry), but ask a Japanese skater what the average Japanese person thinks of them, and they will probably tell you there is still a significant stigma. The idea of skater-as-delinquent persists in many parts of the world, but it could be even more apparent in Japan. Even as the country is preparing for skateboarding in the Olympics, it is still common to see “No Skateboarding” signs depicting an image of a stereotypical young miscreant or to see a skeptical glance while riding the train with a board in hand.

This negative connotation might not persist if skateboarding was viewed purely as a competitive activity. If skaters performed in arenas surrounded by bleachers and crowds, then maybe Japan and the rest of the world would embrace the sport with open arms. Tokyo could tear down the signs with silly illustrations, security guards might not run as much, marble ledges everywhere might not look so worn down. If this happened, if skateboarding events were held solely in competitive venues, if nobody ever heard the clicking sound of wheels on a sidewalk, then maybe the stigma would cease. 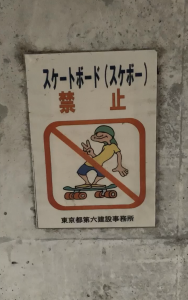 A Choice to Be Made

Skateboarding is a competition with huge crowds in a massive arena. That is a very real thing, but it is also rolling around a parking lot by yourself. Skateboarding is sharing the skatepark with dozens of other skaters on a hot summer day, or it’s staying up until 4a.m. just to be able to use that typically prohibited obstacle. As long as you have a skateboard, you can participate. That’s true in Japan, but also anywhere in the world.

What makes skateboarding great is that it can be so many things at once. The difficulty in defining skateboarding might be the one thing that all skaters are familiar with. Despite a skateboarder’s choice in style, tricks, or terrain, most skaters realize there are countless ways to exist in the sport. Maybe then it would be better to say that skaters are not actually the same at all. Every person applies their own unique mindset to the piece of wood under their feet. Rather than being the same all over the world, maybe skateboarders are all different, and what connects them isn’t their similarity, but a shared appreciation for the incredible potential for diversity. Maybe it is the understanding that no matter how someone chooses to skateboard, they have made a choice to keep pushing.

Hans Klein is a first-year JET ALT living in Tokyo. His home is the land of dreamy concrete playgrounds (skateparks) in the Northwestern part of the United States, but he never tells people how much he loves walking under old pines.