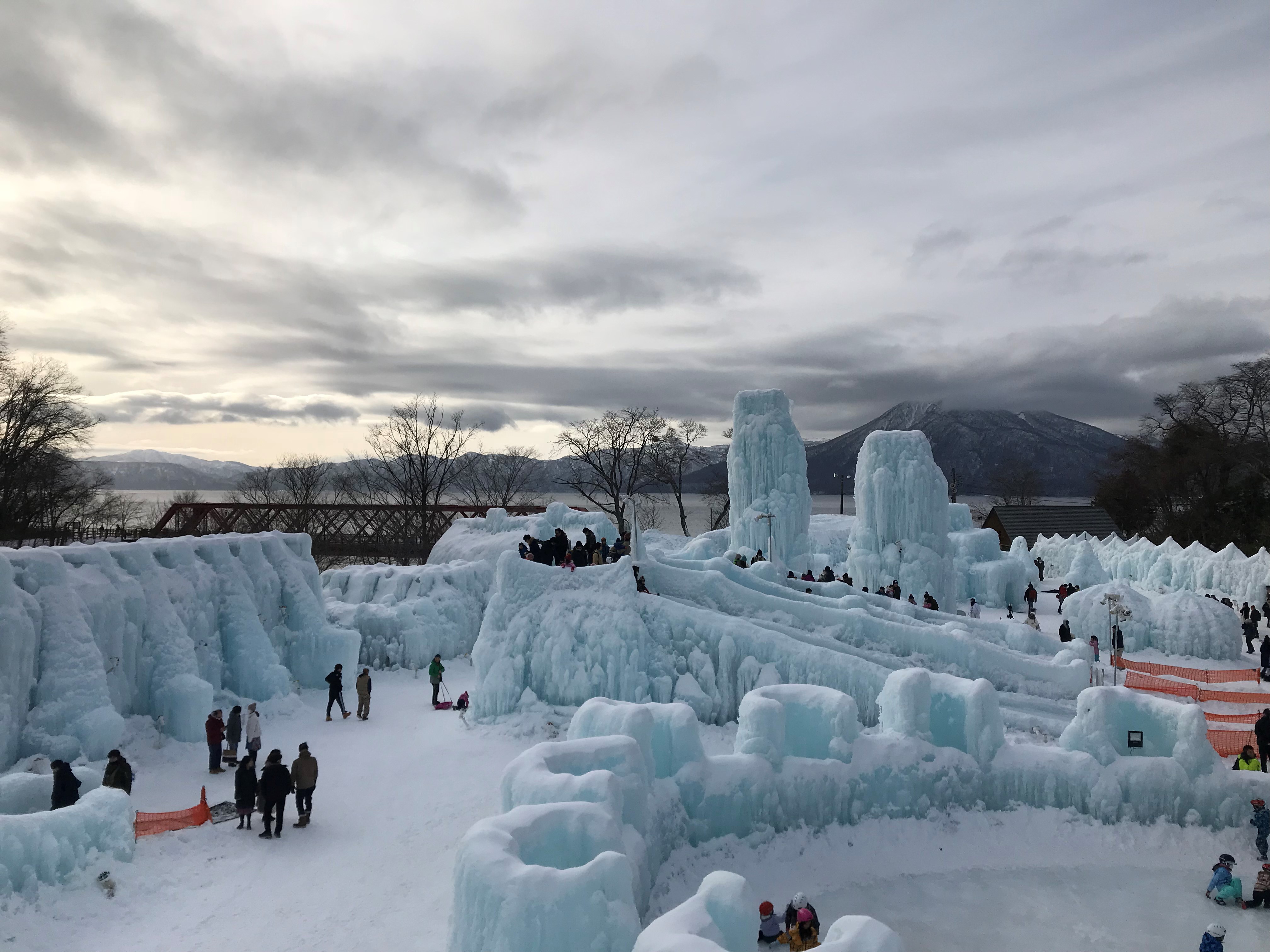 Hello from the snowy north! While you lucky southerners herald in spring and sakura, Hokkaido will remain under the cold spell for a while longer. As someone who hails from the tropical island of Singapore, I’m the ultimate winter newbie. Since I’m placed right here in the winter wonderland of Japan, what better way to fully immerse in the winter experience than by going to an ice festival?

February is Hokkaido’s month to show off its gems. The prefecture was brimming with snow festivals and other activities, welcoming back the bustle and vitality that had been rather subdued during the quiet winter months. Together with a couple of JETs from my area, we decided to make our way down to the Lake Shikotsu Ice Festival on February 1st.

Lake Shikotsu (支湖 Shikotsu-ko) is conveniently located in Chitose, and 40 minutes from Sapporo by car. Its name, shikotsu comes from shikot, meaning large valley in the Ainu language. A part of the Shikotsu-Toya National Park, the caldera lake also holds the title of the second deepest lake in Japan. When my friends and I arrived, we were extremely lucky to be greeted with a clear view of Lake Shikotsu as well as the surrounding mountains of Mt. Eniwa, Mt. Fuppushi and Mt. Tarumae.

Amid the backdrop of a sunny, cloud-streaked sky, Lake Shikotsu’s quaint charms washed over us like a soothing balm. Tranquil waters sat nestled in the midst of breathtaking mountains with snow-capped peaks jutting though the clouds. The encircling ridges were blanketed in a scattering of white snow, bringing a slight jaggedness to the austere yet alluring winter landscape of the lake. For the more adventurous, cross the red Yamasentetsu Bridge and walk to a small area at the end where you can stroll down to the lake for a closer look.

The Ice Festival took place next to the lake. Tickets cost 300 yen per person, with re-entry allowed. Aptly enough, the entrance to the festival was in the form of an ice cave, with a few mini displays to gear you up for the icy paradise you’re about to enter. When I stepped onto the festival grounds proper, the first thing that caught my eyes was the sight of two colossal ice towers. Rows of icicles covered all sides, giving the icy monoliths an otherworldly look reminiscent of the Chinese mythological dramas that I grew up watching.

Aside from the ice towers, the festival also had a number of ice caves featuring displays within them. From beautifully carved chandeliers to recreating a shrine out of ice, each cave was uniquely themed and showcased exhibits with varying sights and sounds, making you feel as though you had ventured into different universes.

A display that stood out in particular was an exhibit of plants and trees crafted to resemble an enchanted ice forest. Frozen plants and trees were exquisitely arranged to form walls of greenery around the walking path. Rows and rows of icicles hung from the branches and covered the entire cave from ground to ceiling, seeming like cascading waterfalls that got frozen in time, and then were lit up in a brilliant green.

The highlight of the festival had to be the magnificent two-storey ice castle built with a corridor, balconies, and even a large spiral staircase. How often can you get to say that you’ve been in an ice castle? Not often would be my bet. It was surreal stepping on the icy floor and walking by those translucent blue-tinged ice walls. My favourite moment would have to be standing on the balcony on the second floor and seeing a bird’s eye view of the entire festival.

Other than the ice sculptures, visitors were also treated to a recreation of the Biei Blue Pond, ice slides, piping hot festival food and for the young ones, pony rides. There was even an ice skating rink. As the sky turned dark, the ice sculptures were lit up in vibrant hues of blue, green, red and more. Going up the castle again felt like a whole new experience at night, and it was ethereal to see the entire festival grounds glow in a kaleidoscopic of colours.

The festival knew how to go out with a bang, ending the night with a fireworks show. The seven-minute performance saw the sky being lit in an explosion of colours for an enraptured crowd.

Compared to the other winter festivals, the Lake Shikotsu Ice Festival may be smaller in size, but it also felt more intimate and cosy. Each exhibit was a world in itself and a delight to explore. One key point was how the exhibits felt more interactive and were intricately crafted to stimulate the senses. Plus, the gorgeous scenery of Lake Shikotsu was the cherry on top. The festival ’s proximity to Sapporo also makes it perfect for a day trip. Next time you’re in the area, do consider putting the Lake Shikotsu Ice Festival on your list!

All photos by: Elsie Tay

Elsie Tay is a first-year ALT who hails from the Little Red Dot. She is currently frost-bound by Hokkaido’s snowy winters and from being awestruck at the beautiful mountains, rivers and scenery here. When not figuring out the intricacies of the English language with her students, she writes and draws in her free time. She is also a herbivore that’s always on the lookout for plant-based meals. Do follow the HAJET Polestar magazine for more Hokkaido adventures.

email
Events, From the Magazine, LanguagefestivalHokkaidoicetravel