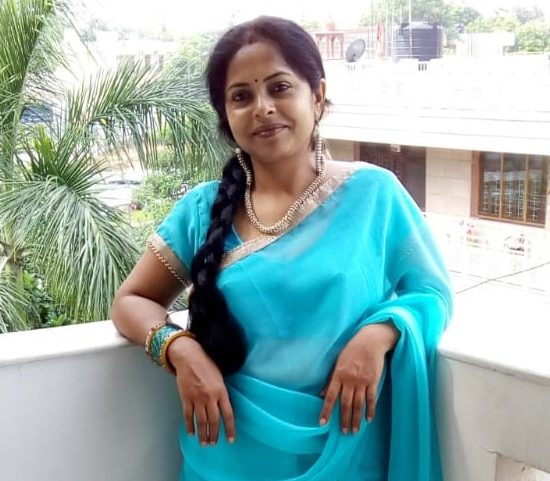 Hello! My name is Divya Jha and I am from New Delhi, India. I am 44 years old, married and have two lovely daughters aged 20 and 17.

I completed my graduation in Japanese Studies from Jawaharlal Nehru University, New Delhi in 1997 and Masters in 2007. Yes, a gap of 10 years between my two degrees because I worked for a Japanese MNC for a couple of years as translator – interpreter after my graduation. Then I got married, had two kids and before I realized it, 8 years had passed! Feeling the need to brush up my skills and draw level with Japanese language, I joined the university again and completed my Masters in the same field in 2007.

Just then I came to know about JET programme and thought of trying my luck. I should ideally have applied for CIR, but there were only 6 seats for ALT that year, so I applied in any case. However, when I got through, realization struck me as to how I would go leaving behind both my little kids . But my husband was supportive and he encouraged me to go and fulfil my dream of going to Japan as I had missed several other chances due to personal reasons concerning my family.

I was placed at Hibiki High School in Tobata area of Kitakyushu, Fukuoka prefecture. Though I loved every bit of being in Japan and ‘feeling’ Japan, I stayed there only for a year because of my kids back home.

Hibiki High School was a credit-system school, the environment was more like a college. Classes ran in 3 shifts and students had the advantage of taking classes throughout the day, in any shift as per their convenience and subjects of their choice. Most of the students were holding part-time jobs. There was no school- uniform (there were many fashionable students opting for this school for this reason too) and students’ age varied from 15 to 75.

My jutaku (Kannonjimachi) was at a very convenient and lively place. The school, Tobata JR station, bus-stop, Seven-Eleven store, Spina super market, city library – all were at a walking distance. I still have vivid memories of Kitakyushu city art museum, Matsumoto-Tei, Wakato bridge and its fireworks, Tobata-Gion festival etc. Since I came from a noisy, densely populated place, this small and quiet town gave me a heavenly feeling. Very soon, I made many friends around the place and felt like I belonged there.

I am juggling with several occupations at present. My main business line is international logistics (which is my family business). Apart from that, I am working as a part-time Japanese language trainer at Japan Foundation, New Delhi and I also do some freelancing with Japanese translation once in a while. I am also running my upcycling/repurposing start-up company ‘unrag’, which is engaged in activities related to recycling of waste materials and holding workshops to encourage people to reuse their household waste.

I had spent 5 years studying about Japan – the language, history, culture, geography, psychology etc. in the university, but JET program gave me the opportunity to ‘see, taste and feel’ it. Hence, I have a many sweet memories.

Knowing the language prior to coming to Japan helped me in sailing smooth so I did not face any hurdles in staying there or mixing up with the society. All the teachers including the Principal would communicate with me; which was unlikely, I was told. Some teachers would bring Japanese home cooked food for me.

I was certainly the first Indian in that school and probably the only Indian in that entire area. People were quite inquisitive about me and they would have several questions when we happened to talk, for example, my saris (how many saris did I have), long hair (was it a wig or real hair, how did I manage to braid it on my own every day), nose-pin (it was oshyare & kashikoi for them, they were thrilled to know that it was traditional custom for most Indians to have pierced nose and ears), mathematics skill (all Indians were supposed to be good at it, how was it possible that I disliked maths and was poor at it), yoga (if everybody in India practised yoga every day) and food (if India had other foods too, other than ‘karee’…. !!). So, my English class-lectures and activities mostly revolved around those topics.

On my way back from school, some neighbourhood kids would wait by their gate and shout ‘Namaste’ to me. There was an old lady on my way home who knew English and would invite me to her home for tea (to practice English but would eventually end up talking in Japanese – she must be around 90 now but still writes me hand-written letters!!)

Most of my weekends were spent visiting nearby places or calling friends and colleagues home and treating them with Indian food. They would marvel at how ‘chapati’ fluffed and to learn that ‘kare’ was the name of one particular dish in India (which is made of yoghurt) and not everything is ‘karee’.

During the school annual fest, I had my Indian stall and had called other Indian JET friends too. I was thrilled to see that the chai, samosa and pakora, was sold off within no time. Female students queued up to take pictures of themselves in sari, bindi and mehandi on hands (henna tattoo).

The general feedback from people around was that they were glad to learn that ‘English’ is not spoken only in European countries and that India is also an English speaking country, every Indian would know at least 3 languages – their mother tongue as the first language and English as the second language and their regional language or Hindi as the third one.  They observed that Indian and Japanese cultures were similar in many ways, so the Indians gelled in Japanese society smoothly.

In order to give back to the Japanese society in whatever way possible, I set up JETAA India chapter in 2012. The idea was to stay connected with other JET alumni and promote Japanese culture in India. Unfortunately, after I came back to India in 2008, there was no JET participant from India till 2016 (in the 22 years’ history of JET program in India, there have been only 46 alumni so far), so I was not that active with regards to JET activities. Then, I got the opportunity to participate in the 30th anniversary celebration of JET program in Tokyo in 2016 and voice my concern as the country representative; as the result of that, there were 2 JET positions taken from India in the next 2 years. Contrary to my firm belief that it would become a constant feature now and given that the relation between both the governments is so good and there has been cooperation in various other fields, the number of JETs from India would rise considerably; there was no position announced in 2019 again! I have tried to draw attention of the stakeholders in the recent JET International Meet (Nov. 28 ~ Dec2. 2019) in the capacity of CR; I only hope that the number of candidates will go on increasing steadily and consistently in coming years.

The good news, however, is that we have actively been organizing cultural events in India recently.  We finished doing two Yukata workshops for University students and Origami and Ikebana workshops are in the pipeline.

As I have mentioned before, I had acquired theoretical knowledge about Japan through my academics but JET program gave me the platform to be physically present there and see it for myself. In spite of being a short time, I learned many things there – being punctual, not taking things casually, management skills, paying  attention to minute details – these are among several other things that have now been imbibed in my personality and naturally it has shaped me to be who I am today.

My tryst with waste management, for example, could also partly be attributed to my exposure in Japan. When I observed that even a clean pet bottle would be disposed in 3 different categories (label wraps, caps and the bottle) and learned that Kamikatsu, a zero-waste town of Japan segregates its waste in 34 categories; I started following the spirit of ‘Mottainai’ seriously and vouched to practice 3 R (Reduce, Reuse, Recycle). Though India as a country is grappling with waste problem, at least personally, I have turned my home into zero waste house and I follow 5 R to 7R (Refuse, Repair, Repurpose, Recover) in my daily life.  My waste management company ‘unrag’ is striving to increase awareness in people around.

Knowing the language prior to coming to Japan helped me and it continued becoming better by the end of my term. I would suggest that whether you want to stay in Japan or come back to your home country after the program, working on your language skills would be helpful if you want to keep working in Japanese line (say, freelancing as translator / interpreter or working for an MNC or tourism sector, corporate trainer etc.). Minutely observing Japanese social rules and business etiquettes, appreciating Japanese culture, networking would help in the long run.