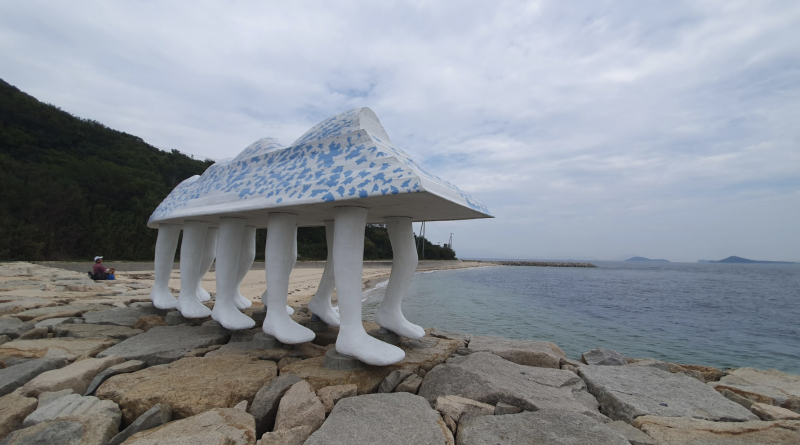 The Setouchi Triennale is a contemporary art festival held every three years on several islands in the Seto Inland Sea, in Kagawa Prefecture, and runs over three seasons. The aim is to revitalize the local area, which has suffered from depopulation in recent years, with this year’s theme being “Restoration of the Sea”. The festival features over 150 artworks by artists from both Japan and abroad, many of whom make use of abandoned homes to host or even become their art installations. The festival attracts visitors from many different walks of life, and in 2016, the milestone of one million visitors was reached, 13.4% of whom were visitors were from overseas(1). In this article, I will highlight my visits in the summer and autumn sessions and hopefully, you can join the next time, because as you will see, it is splendid. As much as I would like to include every photo and art piece I saw, I simply can’t. So, I can only hope that this article will suffice in giving you an enticing snapshot of The Setouchi Triennale. 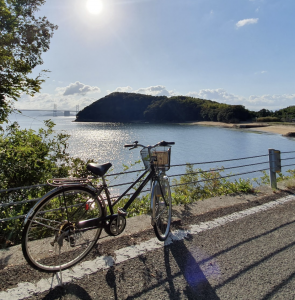 With delicious Sanuki-udon in my belly, a dish the prefecture is famous for, I jumped on the big red ferry at 7 a.m. to embark on the journey to my first destination, Megijima (女木島, めぎじま), population: 200. Naturally picturesque to begin with, the island’s beauty was only enhanced by many temporary and permanent art exhibitions that were installed across the island. Megijima is also known as Onigashima or Ogres’ Island, and some claim that it was the stage for the Japanese folktale Momotaro (Peach Boy), a story in which a boy born from a peach vanquishes a hoard of ogres. The caves where the story is set can be found on the highest peak, Washigamine (188 meters above sea level). The caves are about 400 meters in length and cover an area of about 4,000 square meters.

On the same day, I went to visit Ogijima (男木島, おぎじま), population: 168. Around 20 installations could be seen on this island during the festival’s summer installment, all unique and different in their own way. Once again, the island was so naturally beautiful, and the food served was locally sourced, and delicious.
Ogijima is a community that has taken charge of its own development and through this, has come to embody the Triennale theme “Restoration of the Sea”. This theme particularly resonates with the owner of the only library on the Island, Junko Nukaga-Fukui. He says it was during the summer of 2013, when zero children lived on the island, that its only school closed. However, that same year, artists from the contemporary art group “The Group 1965” reopened the defunct school to house a Setouchi Triennale project with the slogan “Go Back to School and Start Over.” Junko’s daughter went every day and told her parents, “I could go to this school if you like.” The family decided to move to Ogijima from Osaka, applied to have the school reopened, and in April 2014, their daughter began attending Ogi School, a combined elementary and junior high school. 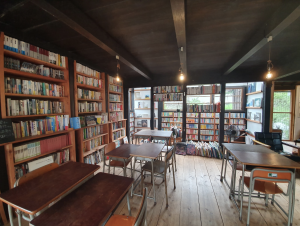 However, every time Junko left to go to Osaka, he noticed the rapid depopulation of the island upon his return, and he wanted to help. He said to himself, “This isn’t the goal. It’s just the starting line. When the students graduate from school, what then?” His answer was to build a library—a place for people to study, a place to communicate with the islanders, and a place to get the information needed to move there, such as the location of empty houses. Ogijima Library opened in 2016, the island’s nursery school reopened the same year and, in the last four years, 40 people have relocated to Ogijima.

After my visit to the library I went to explore some of the quirkier exhibits on the island. The work “The Room Inside of the Room” (2016) by Oscar Oiwa, a Brazillian nikkei (Japanese emigrant or descendant) artist, is a very fun work of art that utilises perspective to create an intriguing landscape. It was a real head-scratcher. In addition, a very beautiful sculpture ”Walking Ark” by Keisuke Yamaguchi (2013) can be seen next to the sea. 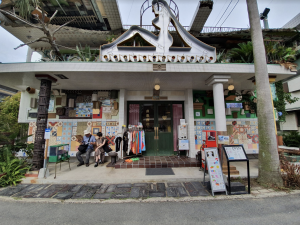 The following day (with more delicious udon in my belly), I set my sights on one of the more famous islands in the region, Naoshima (直島町), population: 3,117. Getting in early is recommended because you really do want to rent a bicycle for the day. Riding the bicycle to see all the different exhibits Setouchi had to offer was lovely, especially because Naoshima is known for its permanent collection of art. The most well-known is the Chichu Art Museum (no photos allowed inside). The museum is a set of interlinked, half-buried buildings that house the owner, Soichiro Fukutake’s, personal collection of five Claude Monet water lily paintings.

Notwithstanding Monet’s art, the most striking work at Chichu for me was by American artist James Turrell. His interactive work had you enter a room that made it feel like nothing else existed anymore, and time and space both moved and stood still at the same time. The second was by another American, Walter de Maria. This room was a temple-like space with golden pillars mounted on the walls and steps leading up to a giant granite sphere.

The most iconic piece on Naoshima is located on the beach: a giant yellow pumpkin by Japanese pop artist Yayoi Kusama—a surreal beacon jutting out into the sea. The pumpkin is a permanent exhibit on the island and is a highly sought-after photo location.

Another attraction of Setouchi amongst all the exhibitions on the Island is the wacky “in湯” public bathhouse—a collage of junkyard scraps and neon signs that operate as a functioning sento. The bathhouse was a nice way to relax after a long day biking around the island (no photos inside, of course!) 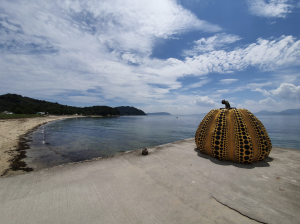 The following day, I went to visit Teshima (豊島). In Japanese, the name Teshima means “bountiful island,” and the island is true to its name. Like Naoshima, bikes can be rented at the island’s ports and are a great way to enjoy the beautiful scenery. I hopped on one myself to explore the landscapes of Teshima. First, was the Teshima Art Museum (no photos allowed), which turns the standard idea of what a museum is on its head. For a start, it is empty. Or to be precise, there is nothing on display. Instead of looking at artworks or objects, visitors are invited to contemplate nature in its purest form: light, water and air. The effect is deeply calming. Teshima Art Museum itself even blends in with the surrounding landscape. Curved and low lying, it looks both other-worldly and somehow part of the surrounding landscape. However, the strangest aspect of the museum is its location—next to a rice terrace.

Bright red strawberries and mandarin oranges are products of Teshima, and Shoji Yamamoto’s orange orchard is a well-known part of the island. I read about Shoji before coming to Teshima, and he says, “Teshima is well-suited for fruit growing. It’s sunny for much of the year and has good slopes, which means the orchards get lots of sunshine and have good drainage. But each type of fruit requires a different approach, so it’s not effecient to grow many different kinds. That’s why I decided to specialize in mandarin oranges.”(3) Shoji is 85 years old and has been growing oranges for the last 65 years. The other popular fruit is the strawberry, and strawberry jam and sauce are popular Teshima products. He says, “Oranges and olives had already been cultivated here for many years, and I thought the addition of strawberries would increase the variety of specialty products. I could imagine kids and grandkids who came to visit, taking Teshima strawberries home with them. I think that revitalization starts with something tasty. For example, visitors who try our delicious strawberries are quite likely to buy our jam in their local store at home when they see the word ‘Teshima’ on the label.”(3)

One of the more enjoyable exhibitions for me thus far was the interactive basketball piece, ”No One Wins—Multibasket” by Spanish art duo Jasmina Llobet & Luis Fernandez Pons. The artwork was a large map of Teshima with a bunch of basketball hoops on it, and I legitimately could spend hours there, which I did, because I was waiting for my ferry. 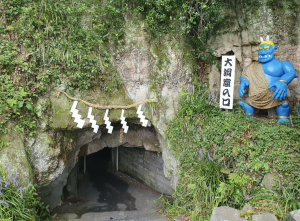 Fast forward three months, and I am going to highlight an island that’s only available to visit during the autumn session, Honjima(本島), just off the coast of Marugame City (great udon by the way). Since ancient times, the people whose occupation was simply “pirate” had been living on these islands. They became a strong crew with weapons and serious sailing skills. The crew was called Shiwaku-suigun (塩飽水軍). The locals told me that Honjima once had a population of around 3,000 in its heyday, however, the population has dwindled to a mere 450, mostly elderly residents. That being the case, it is still the most populated island in the Shiwaku Island Chain. Apart from its wonderful history, Honjima also provides one of the best views of a modern marvel, the Great Seto Bridge, a long suspension bridge spanning many small islands.

I arrived at 6:45 a.m., rented my bike, and just rode around the island in blissful silence, basking in all the beautiful and interesting pieces that were on display for the Setouchi Triennale. It was a transcendent way to end my journey and a wonderful thing to experience.

The Setouchi Triennale transcends the natural beauty present within the islands, and displays a strong feeling of grassroots collectivism by using local resources to help the community and to keep that community alive for years to come.

Ari is an Australian second-year ALT in Kochi City, Kochi, where he teaches at two elementary schools, and one junior high school. He loves to travel, visit new places, and explore different cultures. He has been training in Brazilian Jiu-Jitsu for six years, and currently trains with his team, Ichiryo Gusoku (一領具足), in Kochi. He recently won a gold medal at the 四国大会 (Shikoku Tournament). IG: @arigorney 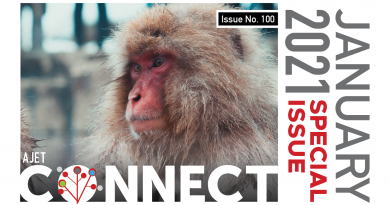 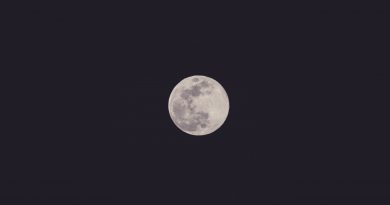 By the Light of the Full Moon: A Foreigner’s Perspective of a Moon Viewing Party 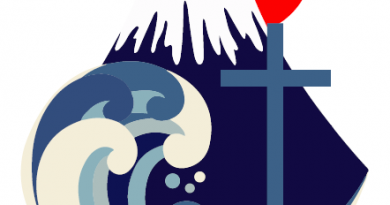