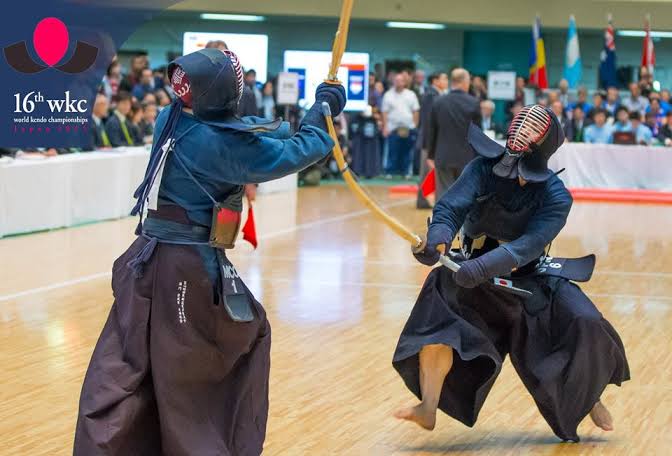 Kendo, meaning the way of the sword, is a distinctly Japanese martial art: smelly, loud, and full of navel-gazing.

Based on traditional schools of swordsmanship going back hundreds of years, kendo was consolidated into its modern form at the turn of the last century, bringing various techniques together under a single banner. Although simpler in style than its predecessors, to this day kendo has kept the dual benefits of deep spiritual thought and full-contact combat that draws participants from every corner of the globe.

A Cursory Timeline of Kendo History

Long ago in a distant land called Japan (temporally distant, at least), samurai killed each other—a lot. They killed each other so much, in fact, that it became a very good idea to learn how best to protect yourself and to dish out death and dismemberment for your lord. Thus, the various forms of kenjutsu, or sword fighting, developed organically over centuries, many of which were consolidated into schools called ryu. These schools were often secretive and based on succession—basically primitive forms of an ALT clique. Fighting with real swords is risky, so many schools opted for wooden swords instead. Padded armour and bamboo foils were introduced in the 1700s and were generally well-received.

The times a-changed, and with the coming of a more peaceful society, samurai training turned introspective, then was banned, and then came back as a kind of fin de siècle WWE, with full-contact matches earning the by-then-defunct warriors a means of survival. In the late 1800s, the philosophy and techniques of various schools were combined with this crowd-pleasing sport, and modern kendo was born—for the most part. First there was militarization, war, a decade-long ban, underground training and a Westernized facsimile of the sport to keep it alive, all before kendo was reintroduced as a softer, more simplified but still highly codified and martial art. A few more decades of internationalization, anime and terrible puns that “you ken-do it” later and here we are!

My First Taste of Kendo

Case in point: Hidehisa Nishimura, three-time All-Japan Champion, a man with calves like uncut kebabs. When I was fortunate enough to see him fight at last year’s World Kendo Championship, his stomp shook the floor like thunder. Of course, not everyone who practices kendo has such brute athleticism, but it’s been my experience that anybody who gives a little time to this addictive martial art ends up fitter, more sure on their feet and even, dare I say it, graceful.

Through repetition of the basics, folks who train from an early age naturally acquire bodily coordination and serious core strength, until by their teenage years they’re built like rapiers — lean and springy. Not only that, but kendo is also one of those rare sports that can be practised at any age, and along with the ability to trounce all comers, elderly teachers develop unnerving power and flexibility. I once did kata with the renowned Sumi Masatake-sensei, who often visits Europe for seminars. Pushing against him felt like trying to shift the Golden Gate Bridge. When he warmed up, he would perform a full split, pick up his sword and proceed to generously distribute ass-whoopings.

Kendo is a Great Way to Get Fit

Kendo is an accessible way to get fit, regardless of age, gender, or ability. The techniques are easy to grasp but difficult to master and exhausting to apply. Aside from the baseline aerobic and physical conditioning required to swing a sword while screaming and sprinting around a room, kendo drills are designed to build stamina. One exercise in particular strikes fear into the hearts of the wise: kakarigeiko. Imagine attacking your opponent, continuously and at top speed, never pausing, not even when the teacher blocks, counters or outright pushes you to the ground. A minute or so of this punishing ritual is enough to leave the average person on the verge of throwing up. In Japan, some dojo practice kakarigeiko for forty minutes at a time. It is a kind of self-imposed hell on earth.

Good Even for Beginners

Don’t let that put you off, though! No one starts with such advanced drills. Beginners first master the basic strikes before being crammed into bulky armour. Even moving around with three full kilos of padded cloth and leather slung onto you is tiring, and by the time you’re fairly used to wearing the equipment you will have already gained sufficient fitness and, more importantly, the grit to fight on when the going gets tough. I’d wager that anyone who does kendo for a year or more could hold their own at traditional sports from track and field to basketball—anything that requires endurance and nimble footwork. More than the benefits to health and mobility, however, kendo also emphasises sharpness of mind.

Kendo done well is blindingly quick and with just four targets but infinite ways to make an opening, a match between experienced players becomes a kind of 3D chess—with swords. Being repeatedly hit over the head cultivates an unwavering mentality that can spot threat and opportunity in an instant and respond with snapshot reflexes. Underneath all the screaming and stomping, kendo is a form of mental and spiritual training unlike any other. When the first lesson you learn is to fight to the death, you learn to better appreciate life.

It was this underlying philosophy that took me beyond “Cool—swords,” to studying kendo as a means of bettering myself. While you are in Japan, I wholeheartedly recommend that you drink from the source and give it a try, inside or outside school. Your calves will thank you!

For a much more systematic and academic breakdown of kendo’s rich history, I highly recommend kenshi247.net. It is a trove of insight into the development of this fascinating cultural treasure.

(Incidentally, if you find yourself in Kyoto and feel like giving kendo a shot, hit me up at danemul@gmail.com. I’m always happy to help a fellow nerd).

Daniel Mulcahy is a first-year ALT from Ireland based in Kyoto prefecture. His hobbies include becoming a kendo master, anime and exploring Japan. You can follow his adventures on his blog at shingaimumon.wordpress.com.

email
From the Magazine, Lifestylekendo