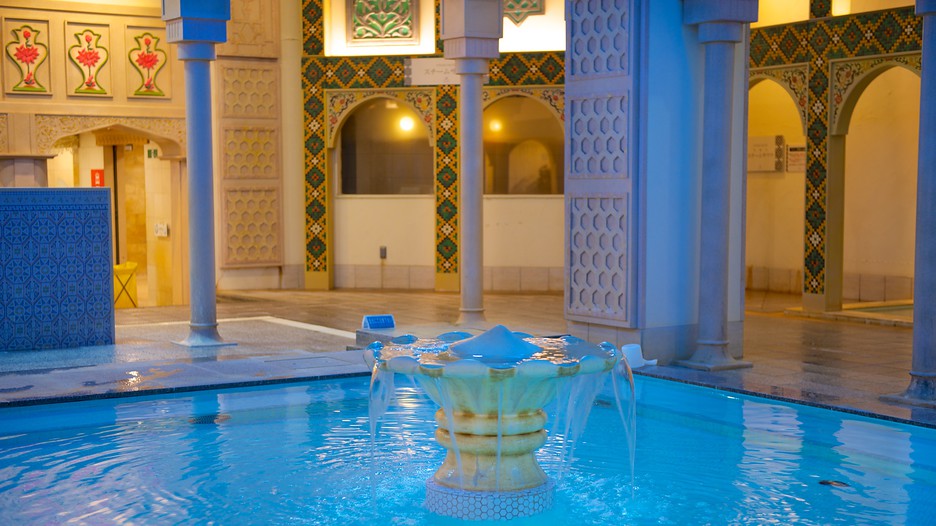 Image via and © Gaijinpot.

There’s a magical place in Osaka, a fantasy world of whimsy and wonder. I’m totally serious: Spa World is fabulous.

The first thing that you see when you reach Spa World is the Grecian fountain outside. It shows masculine figures having a picturesque frolic in the water. It really sets the tone for the adventure you’re about to have.

On March 9th, AJET Block 6 made a trip over to Osaka. JETs from Hyogo, Kyoto, and Shiga met in the lobby near the statues of improbably muscular men. Inside the lobby, we bought entrance tickets from a machine and then received our wristbands that would track any purchases we made inside. After stashing our shoes in a locker, men and women separated.

There are two zones for Spa World; European and Asian. They both feature art, architecture, baths, and spa treatments from multiple cultures in the regions that they represent. Access changes on a monthly basis because they separate men and women. In March, the ladies were able to go to the European zone.

Both zones are wonderlands of fantasy, art, and delight. Therefore, you really ought to go to Spa World twice for the full experience.

In the European zone, we took a dip in the individual barrel baths, enjoying the hot water jets. Eerily realistic wolves watched us from atop a wooden cabin. Next was a short stop in the Finnish sauna, where you can watch or ignore the TV as you sink your toes into the cushions that cover the wooden plank floor.

After that, we went to a stone Grecian section and enjoyed the bath of herbal water and compared which scents we could detect. We picked up on mint, lavender, and other herbs, but no one smelled the pinch of rosemary. Right next to that, there was a special fruit-scented bath. The fruit scent changes every month, which means there’s always a new sensory experience.

In that room, there’s a door that looks like a service entrance. I’ve been to Spa World four times before and always assumed it was off-limits. But the bravest of our group strode in and revealed that this was a secret chamber where we could take a mud bath. The mud was smooth and rich and scented with herbs. After the steamy heat of the herbal baths, the mud was a chilly relief. We were so soft after we washed the mud off.

At that point, we had gone to perhaps a fifth of the baths available in the European section. I don’t think there’s space to go into detail about everything, but I’ll say that a definite highlight is standing underneath the powerful waterfall in the open-air bath. You can exfoliate in the salt baths, lay out in the blue-lit grotto, and if you’re really brave you can step into the golden tub of cold water before you leave the baths. If you’re tacky like me, you can take the time to lean against the wall and copy the poses of the beautiful Roman statues in the atrium.

But after that, it’s a rush to get down to the third floor and make appointments for massages and spa treatments. My favorite massage parlor had a great deal on an hour-long full body massage, so two of us took those appointments. Others spent more time in the baths, got facials, or ventured to put their feet into the blue-lit foot bath full of tiny silver fish who cordially visit and nibble the dead skin between your toes. I’ll admit that their feet were indeed very soft afterward, but fish are scary.

There are multiple restaurants inside Spa World, which is very good because we were not ready to leave by lunchtime. We had Chinese food. We were severely tempted by the ice cream and Dippin’ Dots stands, but we were just too full. The last thing we did together was take a group photo, posed against the golden railing in our pink spa pajamas.

Rebecca Ruth is currently a 4th year JET in Hyogo Prefecture. She is also serves as the Block 6 Representative.