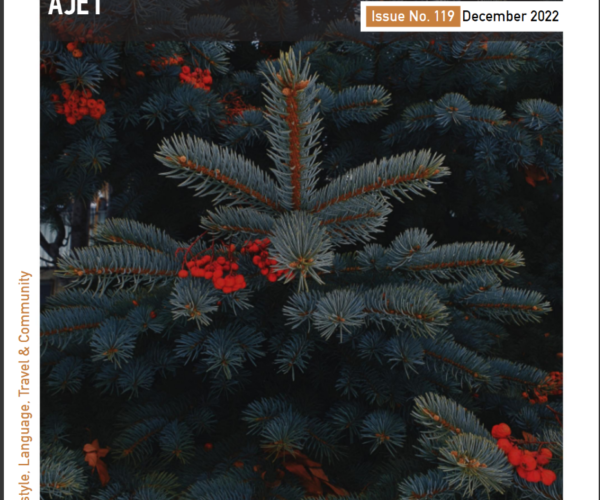 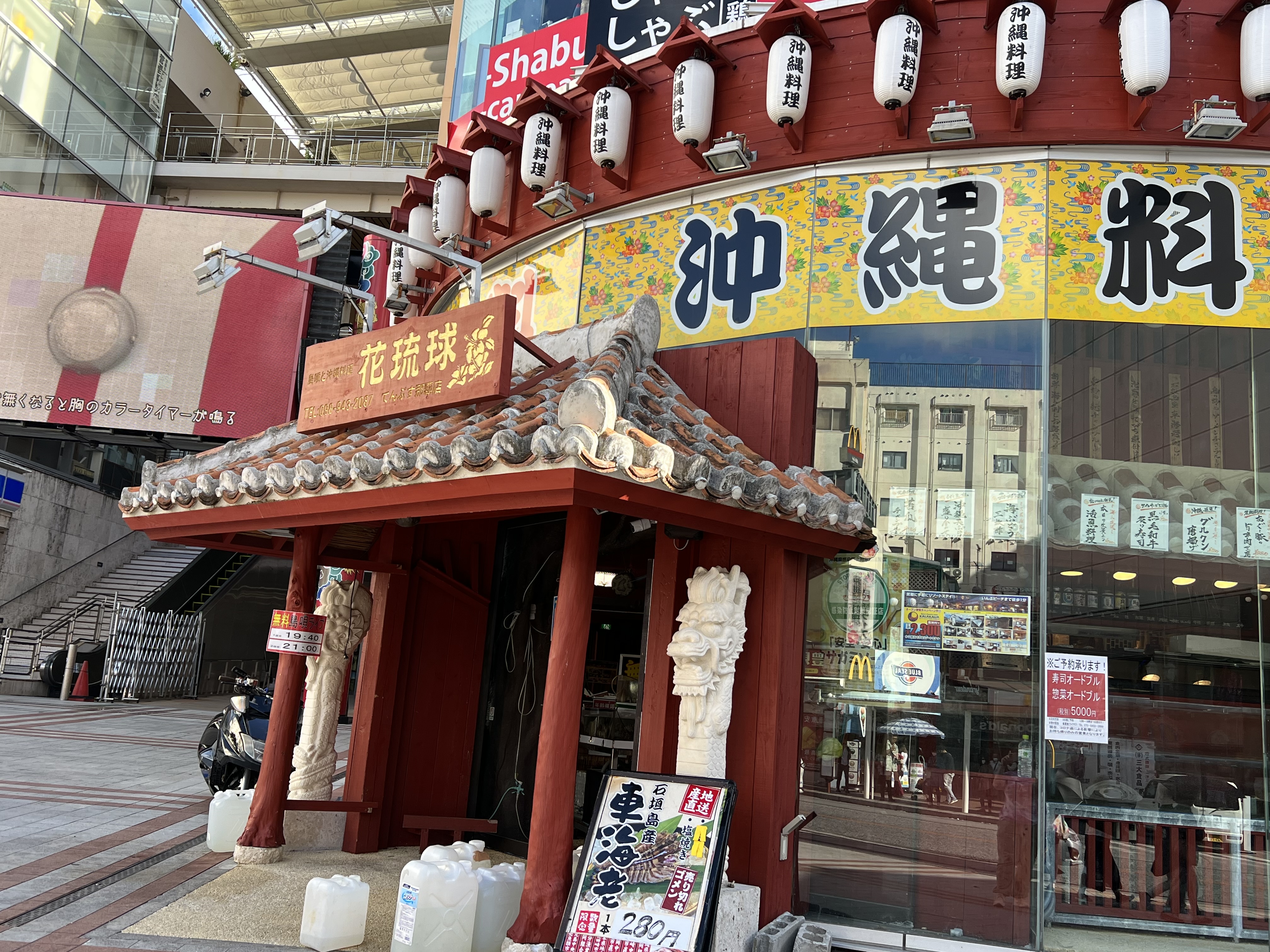 This article originally appeared in the January 2023 issue of CONNECT.

“That place is a tourist trap!” is a phrase you might have heard once, or, potentially, once too much. The phrase “tourist trap” has become somewhat of an unjust title for places that see many foreign eyes, whether from outside the city or outside the country. Ironically, a tourist trap tends to be a place of some cultural, historical significance, or adversely, for its notoriety. It is only the most logical phrase for important places that attract the most eyes and faces. So, why is there a need to scoff at the familiar?

Perhaps there’s some underlying hokeyness around paths so often traveled. Most people have a mental image of what Japan looks like even if they’re never been before. For some, it’s sitting underneath a tree and observing the nearby cherry blossoms. For others, it’s a modern sprawling urban landscape with state of the art technology. And for many others, it’s something far less grand in scale, but just as important: kimonos, samurai, sushi, hot springs, tea ceremonies and everything in between. I consider myself a fan of such cliches. As such, a place that’s as iconic as it is cliche is Kokusai-Dori in Okinawa.

Kokusai-Dori translates to International Road, and it is, as the name suggests, just that. With its many appealing, polished, and accommodating services and stores, this long street is lined with dozens of shops with glowing neon signs akin to the Vegas strip, albeit much smaller in scale and less glitzy. You’ll find everything between ukulele-selling gift shops, international food chains, and huge specialty stores for local staples. My favorite Okinawan specialty is a beni-imo tart: an oblong-shaped tart filled with vibrant purple sweet potato filling. This quintessential pastry gets its name and color from the beni-imo sweet potato grown in Okinawa. The stores that sell them are impossible to miss, since they have gigantic versions on sign displays of the stores, purple filling and all.

A walk down Kokusai-Dori street is a must for any Okinawa-bound travelers, no matter your stance on tourist traps. Despite being a textbook example of one, there is actually another reason to visit Kokusai-Dori, even for the most jaded of travelers who avoid tourist areas at all costs. Turning off Kokusai-Dori, you’ll find the First Makishi Public Market. This covered shopping center is a market-turned-labyrinth that oozes with the culture of a tight knit community.

I found myself on Kokusai-Dori one lazy afternoon when I saw an entrance to an alley I had never acknowledged before. My itching curiosity got the best of me, and before long, I headed inside. The blinding midnoon daylight was, thankfully, mostly drowned out by the thin awning that covered the street. It grew darker, and the heat became much less oppressive. I felt a great sense of comfort in that never-before-seen-yet-somehow-familiar half-lit market. I was surrounded by small stores, only a few meters wide, selling all sorts of goods and commodities: fruit, fish, meat, painted clay shisa dogs, children’s toys, porcelain cups and plates, kariyushi-wear, and various kinds of alcohol in even more various sizes. I was surrounded by colors on every side: colored signs, lights, and advertisements, stained glass, wall art, hallways, and all of the cozy shadows that naturally came in between. As I walked through this maze of wonders, I smelled charcoal from the izakaya cooking yakitori, the unmistakable twang of durian from the colorful fruit stands, and the winding damp concrete floor. The sound of nearby footsteps, clerks giving store greetings, and the droning of the overhead fans filled my ears. It felt like I had stumbled into another world.

I was surrounded by small stores, only a few meters wide, selling all sorts of goods and commodities: fruit, fish, meat, painted clay shisa dogs, children’s toys, porcelain cups and plates, kariyushi-wear, and various kinds of alcohol in even more various sizes. 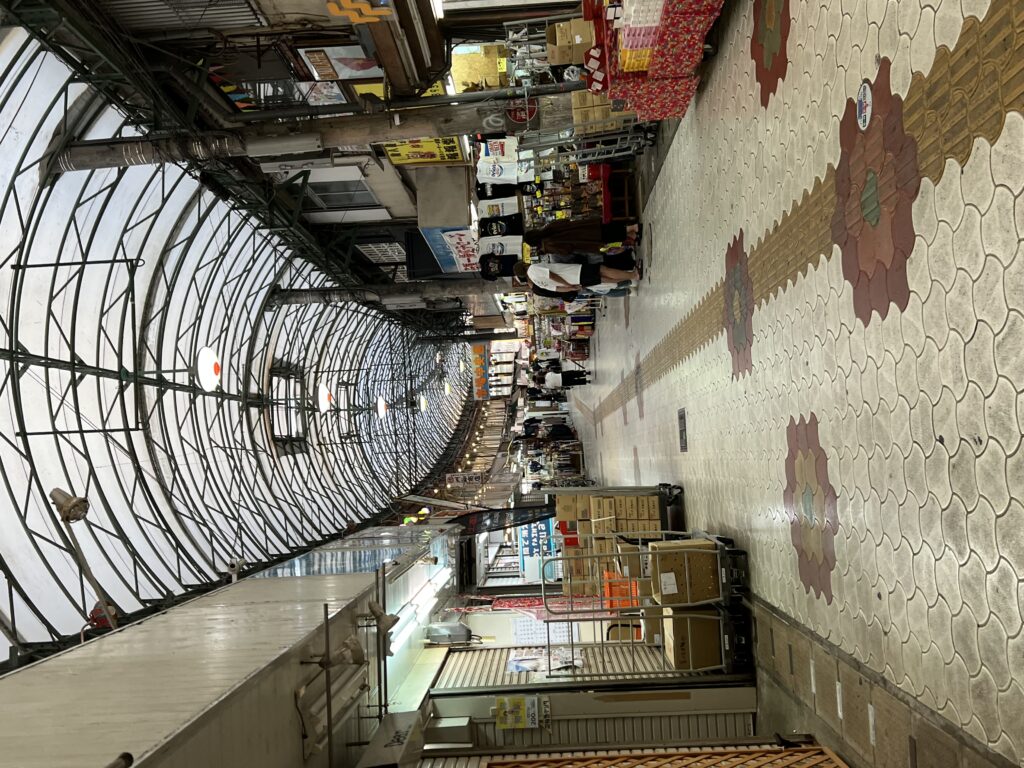 It’s no wonder people still call it the “Kitchen of Okinawa.”

First Makishi Public Market, given its placement, naturally has stores aimed at all manners of tourists nestled in between the grocery stands. These stores are stripped of the bells and whistles, fresh paint, fancy polish, and blinding lights of the ones just a dozen meters outside. I was overwhelmed by the sheer contrast of the duality unfolding in front of me. Between the new, ever evolving Kokusai-Dori with newer shops popping up the moment older shops fail, and the ever reliable unchanging First Makishi Public Market. Between the openness and order outside and the closed in chaos under the awning. This cathartic feeling washed over me like a storm and made me really appreciate Japan much more.

The market has a long running history and an incredible amount of local importance. Before being initially established as a proper market, First Makishi Public Market began as a post-war black market for residents to exchange goods. Despite the commercialization around it, local residents still go to purchase fish, meat, and all manner of local produce today. It’s no wonder people still call it the “Kitchen of Okinawa.” Shoppers can even purchase goods on the first floor and have them cooked on the second floor for a charge.

Now you might be thinking, “Gee, I don’t know how I feel about wandering into a somewhat grungy, dark labyrinth where most of the writing is in a language I can’t read and all of the service is in a language I can’t understand,” and I can relate and empathize with these feelings. However, I think the First Makishi Public Market is the best fit for every tourist that goes to Okinawa. Odds are, you’ll probably end up going to Kokusai-Dori in the first place. If you find yourself falling uncomfortably into the routine of exclusively frequenting well known beaches, shopping malls and highly trafficked restaurants, and you want a change of pace, just turn the corner and you will find exactly that. The difference is bright to dark, polished to rough, and pristine to rugged. It’s the familiar, cliche, and typical—transformed to none of the above.

The incredibly bizarre layout inarguably feels like a maze, and, even as someone who gets lost easily, this place was particularly labyrinthine. That being said, it’s incredibly easy to find your way back out to the main street as the foot traffic creates easy exits so you’ll never feel hopelessly and helplessly lost. There’s an incredible sense of whimsy that comes with pure directionless wandering when the anxiety of danger is stripped away. I do recommend bringing a smartphone, however. There’s countless tools that will supplement any gaps in communication or language barriers that come up. Google has a spoken translation tool that will take words you say and play the translation in Japanese and vice versa. It also has a feature that will parse written Japanese into English text with your camera, although it’s not foolproof given the variety of fonts that make words harder to identify.

At this market, you can experience anything you want, however you want, at any pace you want. Okinawa is no stranger to foreigners, so there will be plenty of people who can help you even if you don’t know Japanese. Paired with other tools and the Okinawan people’s friendliness, you will almost certainly have a worry-free experience. There’s very little to lose and everything to gain with this detour that most people might, unfortunately, miss. I implore you, if you ever find yourself on Okinawa, to dive down the rabbit hole that is First Makishi Public Market and see what it’s like for yourself.

Martina Comorkova is a first-year ALT located in Okinawa Prefecture. She enjoys reading, writing, history, and all kinds of nerd culture. She’s on a mission to absorb and deliver as much information about Japan while on the JET program, and potentially pen a novel or two.