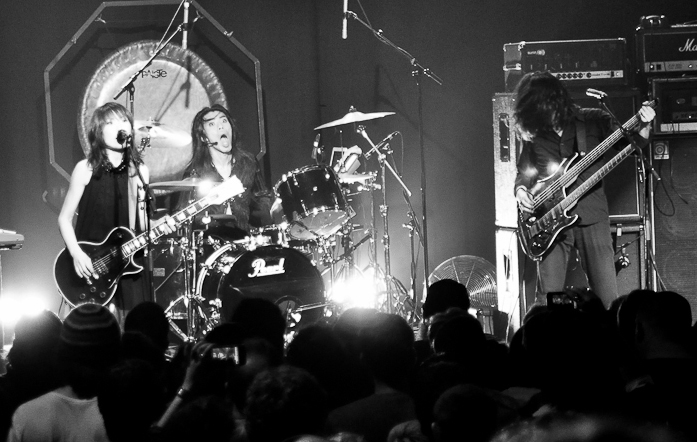 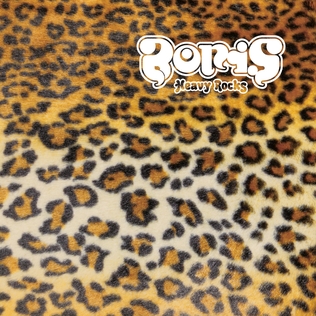 For over three decades, Tokyo legend Boris has been churning out a vast discography of gritty, downtuned metal, old school thrash, noise rock, and explorative experimental music. Their latest release, Heavy Rocks, shows the three-piece dabbling in whatever they damn well please, and despite the frequent shifts in sound from song to song, it’s a surprisingly cohesive set of tracks that balance out between the raw, furiously aggressive moments and darker, dreamlike ones.

“She is burning” rips the album open with classic rock riffs and a thumping beat. Boris isn’t easing into Heavy Rocks; they’re jumping in face-first. Pummeling drums and an unexpected horn section amplify the sense of urgency Boris is riding on into “Cramper.” Continuing the high-octane riffs and rhythm, the second track on Heavy Rocks is another callback to the old days of rock. The backing vocals in this song are particularly haunting; they’re cartoonishly high-pitched and genuinely unsettling. By the time “My name is blank” hits, Boris warps into the realm of heavy metal. The guitars have an added layer of distortion while drums have stepped on the gas pedal. And the vocals abandon all melody in exchange for pissed-off screams. This song demands headbanging from all who listen. Lead guitarist Wata’s chaotically dissonant solo leads the ear on a wildly unpredictable ride full of whammy bar play and borderline abusive string bends.

Speaking of dissonance, “Blah Blah Blah” opens with a sax solo from hell,accompanied by equally horrific guitar slathered in a mess of effects. If this were the first track on Heavy Rocks, many listeners may not have made it to the remainder of the album. It is genuinely offensive to the ears, but after the short-lived, abrasive moment, a synth-like fuzzy bass riff cuts in with a wicked groove that demands movement. Sitting behind the prominent bass line is a guitar soaked in reverb, making noise and harnessing feedback.

“Question 1” returns to the fast-paced rock and roll of previous tracks for about one minute, only to collapse into delay-drenched, post-rock slow motion, accompanied by feedback and echoing vocals. Soon after, the heaviest moment on the album (so far) appears with guttural screams and chugging riffs, returning to rock and roll roots.

“Nosferatou” drops into the experimental realm with some doom-metal flavor. Low-and-slow guitars underlie angelic vocals and the return of the frantic saxophone.

Boris does whatever the hell they want. And somehow, it works.

“Ruins” sees a return to proto-metal with ripping drums and guitars running full speed to the gates of hell. The dual-lead harmony at 1:33 is epically triumphant, suitable for leading troops to victory.

Despite the stellar quality of tracks up until this point, two of the last three songs on Heavy Rocks fall flat, making the first half of the album significantly stronger than the second.

“Ghostly Imagination” abandons the vintage-rock stylings in exchange for electro metal in the same vein as Powerman 5000; heavily distorted vocals, a racing bass drum, and an annoying guitar riff paired with incessant 8-bit synths frankly don’t fit into the diverse mix on Heavy Rocks. It’s without a doubt skippable, and most will likely do just that.

On “Chained,” Boris keeps the energy high with three and a half minutes of hallucinogenic chaos. Uncountable layers of sounds and almost excessive use of effects pedals create a hazy atmosphere. It’s composed of super fuzzed out distortion, distant screams, and guitar leads recorded in outer space. This is undoubtedly one of Heavy Rocks’s strongest tracks, which makes the transition into “(not) Last song” even harder to swallow. It’s a six-minute slog of mostly piano and wailing vocals, later joined by frantic, reverb-laden guitar. Aside from how excruciatingly slow and unnecessarily long this track is, the vocals are annoyingly repetitive and mixed way too high; the combination is harsh on the ears.

Heavy Rocks proves that Boris still has more musical territory to explore even after 30-plus years as a band. The riffs are plentiful, the energy is infectious, and the rock and roll spirit lives on in the majority of these ten tracks, despite a few misses.

You can stream Heavy Rocks now on Spotify.

Ryon Morrin is a fourth-year ALT living in Shintotsukawa, Hokkaido. He’s a Japan-life enthusiast, a mountain climber, and a vocaloid fan. He enjoys going to shows and music festivals, learning Japanese, and writing creative nonfiction.