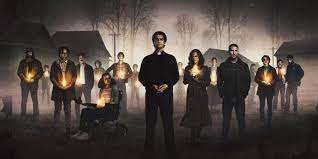 Midnight Mass is a deeply personal passion project of its director, Mike Flanagan. So perhaps it’s fitting that your enjoyment of the series will largely boil down to your personal outlook on organized religion. If you’re someone with a negative perception of religion, then this show isn’t for you. If you’re someone who identifies as spiritual but not religious, it might strike a chord with you. But if you’re someone like me, who’s a real sucker for meditations on faith, then you’ll probably find Midnight Mass to be enjoyable yet slightly prosaic.

Many people have compared Midnight Mass to the works of Stephen King, given its New England locale, its spooky atmosphere, and its ensemble cast. While I can definitely see King’s influence in the show, I think a better comparison is with HBO’s The Young Pope. Both shows are treatises on faith and religion with a distinctly Roman Catholic flavour, both rely on moody, atmospheric cinematography, and both centre their emotional cores on passionate, poetic monologues. 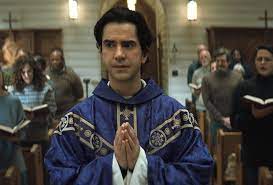 However, Midnight Mass is simply not as willing to embrace its inherent silliness and absurdity, in stark contrast to The Young Pope. You will find no LMFAO montages or kangaroos in  Mass. And while the cast gives their all, there are moments where they cannot hide the inherent corniness of their lines. Like King, Flanagan is very good at delivering something simple and basic enough to appeal to a broad audience. This is not an insult. Popular fiction, by definition, must appeal to as broad an audience as possible. However, if you are hoping for something a little more niche or nuanced, you might walk away from Midnight Mass disappointed. It doesn’t have the courage to say much on God and the universe beyond “Well, it’s a mystery, innit?” And it demands to be taken seriously, with nary a joke or moment of levity.

That being said, Mass is more aware than many works of the distinction between faith and ritual when it comes to religion. Most religious villains are either mad zealots or con artists, with the emphasis of their villainy being on their faith. But instead of faith, most of the time spent exploring characters’ religion in Midnight Mass focuses on their rituals, the shared set of practices that give them a sense of community and identity. It is these rituals that the villains of the piece exploit, their own failings and insecurities warping Catholic rites into something mad and violent. And it is through remembering the spirit of these rituals, instead of the letter, that the day is saved.

This is really the deciding factor in your enjoyment of the show. Those who find faith suspect on principle might find the show dogmatic, while those with a more evangelical religiosity might not like how the church as an institution comes out redeemed. However, for all its faults Midnight Mass has the passion and earnestness of a truly devoted convert, for which I can’t help but enjoy it.

Marco Cian is a 1st-year ALT in Toyooka, Hyogo. His students call him “Rich Man”, though he still does not know why. He reads a lot, and you can find him on his Youtube channel, È quasi milione, where he talks about fantasy works.