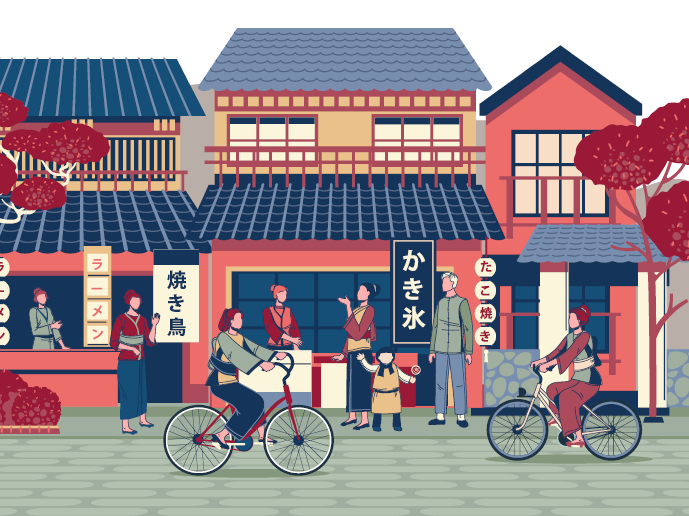 Some of the authors in this piece have chosen to shorten or omit their names for privacy reasons.

Life abroad is hard, particularly these days. Culture shock and homesickness can rear their heads any time and be a drain on our wellbeing. That is why this article is devoted only to the positive. From search parties in school to receiving an umbrella from a stranger, foreign residents in Japan have sent us their most heartwarming stories. Read on for little doses of happiness.

Anonymous (Gunma 2015-2020)
Gunma gets ridiculously cold in the winter. So much so that the hallways of the school might as well be freezers. During my first winter in Japan, I was conducting speaking tests out in the hall (so not to disrupt the class). I casually mentioned to my Japanese Teacher of English (JTE) it was pretty cold out there.

Fast forward to lunch time, I stayed back in a classroom to discuss lessons with another coworker. Little did I know, my absence from the teacher’s room was quickly noticed. The JTE from before mentioned that I had said I was cold . . . this apparently caused the PE teacher to worry that I was in some far corner of the school dying of hypothermia. So he led a search party through the school for me. Five minutes later, I meander back into the teacher’s room and everyone is surprised and relieved that I’m not dead. They had to call the search party back over the intercom. Embarrassing for me, but also super heartwarming that they cared so much for my well-being.

Yaroslava Timoshenko (Ishikawa 2014-2016)
I was up in the mountains with some friends in the winter and forgot to turn off my car’s lights before going exploring (I had them on because we’d been going through a series of tunnels). Coming back in the early evening, I found my car’s battery dead. It was getting colder and darker, and we were about two hours from home. Luckily, I found a small restaurant and, although it was closed for the day, the owner called her son to drive down and help us and gave us some snacks while we waited. Really turned around a possibly dire situation!

Anonymous (Niigata)
During the first week of January there was a major snowstorm that left my town covered in over a meter of snow overnight. While I was struggling to dig my car out, a neighbor who just finished clearing her car came over and helped me with mine. She spent over 20 minutes helping me shovel snow and made sure I was able to safely drive out afterwards.

Kirsty (Saitama)
I am not used to snow; it doesn’t snow where I am from. So when I was confronted with my first serious snowfall here, I had a lot of trouble trying to walk in the snow.

The next day the snow had begun to melt and ice over and was even more difficult. I was slowly, gingerly inching along a path to school, clinging to a rail on the side. An elderly Japanese woman saw me and asked “daijōbu?” (Are you OK?). I gave a quiet daijōbu back. She looked harder and asked a little harder “daijōbu?” I nodded and said quietly “daijōbu.” She shook her head, held out her hand flat and said “chotto matte” (Please wait). She then gave me a lesson on how to walk safely in the snow and ice. She understood I was very much not daijōbu despite what I’d told her and was insistent on helping me. And yes, I got to school safely, in part thanks to her.

Sharré Bakker (Nagasaki 2017-2018)
When I was in Nagasaki, the local landscaper would always greet me as I passed on my way to work. One time he mentioned he liked Ghibli and I told him I did as well. The following week he gave me a little Ghibli-themed gift bag. <3

Sara Atwood (Hyōgo)
One day, I decided to walk home instead of taking the bus. It had been cloudy all day, but I hoped the rain would hold out. Unfortunately it didn’t. When I was walking up a hill, a tiny old man with an umbrella was walking down. He approached me, asking if I understood Japanese. When I said “a little,” he proceeded to tell me he would give me an umbrella. He asked me to follow him to his house just around the corner, which surprised me at first. But as he was quite small, elderly, and had a limp, I felt pretty safe.

We walked to his house, which was as he said, literally around the corner. It only took about a minute, but he still somehow managed to chat all about his grandkids on the way. When we got to his house, he rang the doorbell so his wife could meet us. He asked her to bring me their brand new vinyl umbrella. They told me to keep it and to be careful not to catch a cold. They were incredibly cute. I still use that umbrella. They didn’t tell me their names at the time, but thanks to the hanko stamp on the handle, I know I am indebted to the Fujimotos.

Annelise Wilp (Saitama 2018-2020)
The school nurse invited me and some other Assistant Language Teachers for dinner at her parents’ house. It was some of the most delicious food I’ve had in Japan—nothing beats homemade! It was great to see an elderly couple so interested in foreigners. When we left, the ojiisan (older man) gave us some vegetables from his garden. This night was one of my most special memories in Japan.

Jennifer (Kōchi)
I work at an agricultural school. When the pandemic first got bad and they shut down classes in April 2020, the students couldn’t come and plant the crops they needed for their classes, which have a specific planting and harvesting schedule. So all the teachers got together, even those with absolutely no agricultural experience or knowledge, and pitched in. We put on our old clothes, got some boots, gloves and sunscreen, and got to work! I learned how to use a hoe, turn soil, plant and harvest crops, and even tend to some flowers. My favorite was planting corn. After spending a day in the hot sun, we were wiping sweat and our arms were drooping, but we felt so accomplished! We all had nabe out of a huge pot. When it came time to harvest and sell the crops later on, we each got some for free. It really helped me appreciate teamwork, agricultural knowledge, and the way our food is made. It was also a great bonding experience that I’d never have had if school hadn’t been closed. I’ll never forget it! If they need any extra hands this year, I’d love to help out.

Anonymous (Kyōto 2014-15)
This is outside of my prefecture, but I was temporarily on the island of Amami, and the inclusivity here is something I’ve never experienced in Kyōto. I joined a fitness club and couldn’t even go that regularly due to work time constraints, but they made the effort to invite me to one of their houses for a Christmas gathering, which meant a lot because I was new to the island and honestly felt kind of lonely during the holiday season. Their treatment of me didn’t change despite/because I’m a foreigner, and I felt very . . . at home, on this island. They say you get back what you put into the universe, and I would say on this island (of Amami), and perhaps the rest of Japan as well, it’s very true.

Meg Luedtke (Fukui)
Occasionally I go out and get treated to a meal by one of my JTEs and her daughter to help her practice English for college. Because of my specific dietary needs, it can be a bit difficult to find restaurants for me to eat at, but through a series of connections we have found one place that’s quickly become a favorite of mine, whether I go there with co-workers, friends, or by myself. The place is a small curry shop in the neighboring city. Over my multiple visits I’ve made, I’ve gotten to know the owner pretty well. He has always been very kind and accommodating to me and of my diet, going out of his way to make special batches of rice or curry that is just for me. He’s even taken to calling me “Princess Megan’’ when I walk in the door, born out of a joke we had due to my pretty limited diet needs. He often will send me a Line just to check in, wish me happy holidays, or invite me to the various BBQs and wine bars happening in the city. He’s kinda become like my local Japanese grandpa. 😆

Katie Sampaio (Saitama)
I have a backpack that is in the shape of a dinosaur that has a huge grin! When I wear him, I will now and again feel a little tug. When I look, it’s always a little old lady that comments how cute it is. The looks on their faces are the best! It also happens with kids! I’ve literally been followed by little ones in stores because they can’t get enough of my bag! Bart the dinosaur is on Instagram.

Rowan Upstone (Gunma)
When I first arrived in Japan, everything was disorganized. I’d never been to Japan, so I figured I should at least see the place before starting work. This was just in case I hated it and wanted to bail. I decided on seeing Tōkyo and Sendai. To avoid taking all my possessions to Sendai, I figured I’d use Kuroneko (a shipping company) to send my stuff to Gunma ahead of me.

When I arrived at a local conbini (convenience store) asking them in broken Japanese for directions to the Kuroneko office, they asked me what I wanted to do. After explaining, the clerk left his post, walked me back to my accommodation, took one of my very heavy bags, took it to the local Kuroneko office and helped me fill out the paperwork all without prompting. I was just expecting directions and didn’t even ask for anything more. I was so grateful for that. Gave me a great impression of Japan and Lawsons from week one. 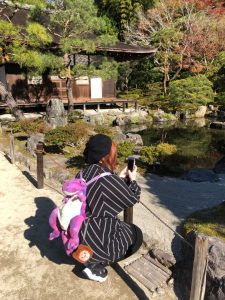 Clare is a second-year JET in the inaka of Fukushima, but she’s originally from England. When not editing CONNECT’s Wellness section, she spends her days reading fantasy books, writing stories, and hiking up mountains in northern Japan. You can follow her travels and own tales of positivity here.