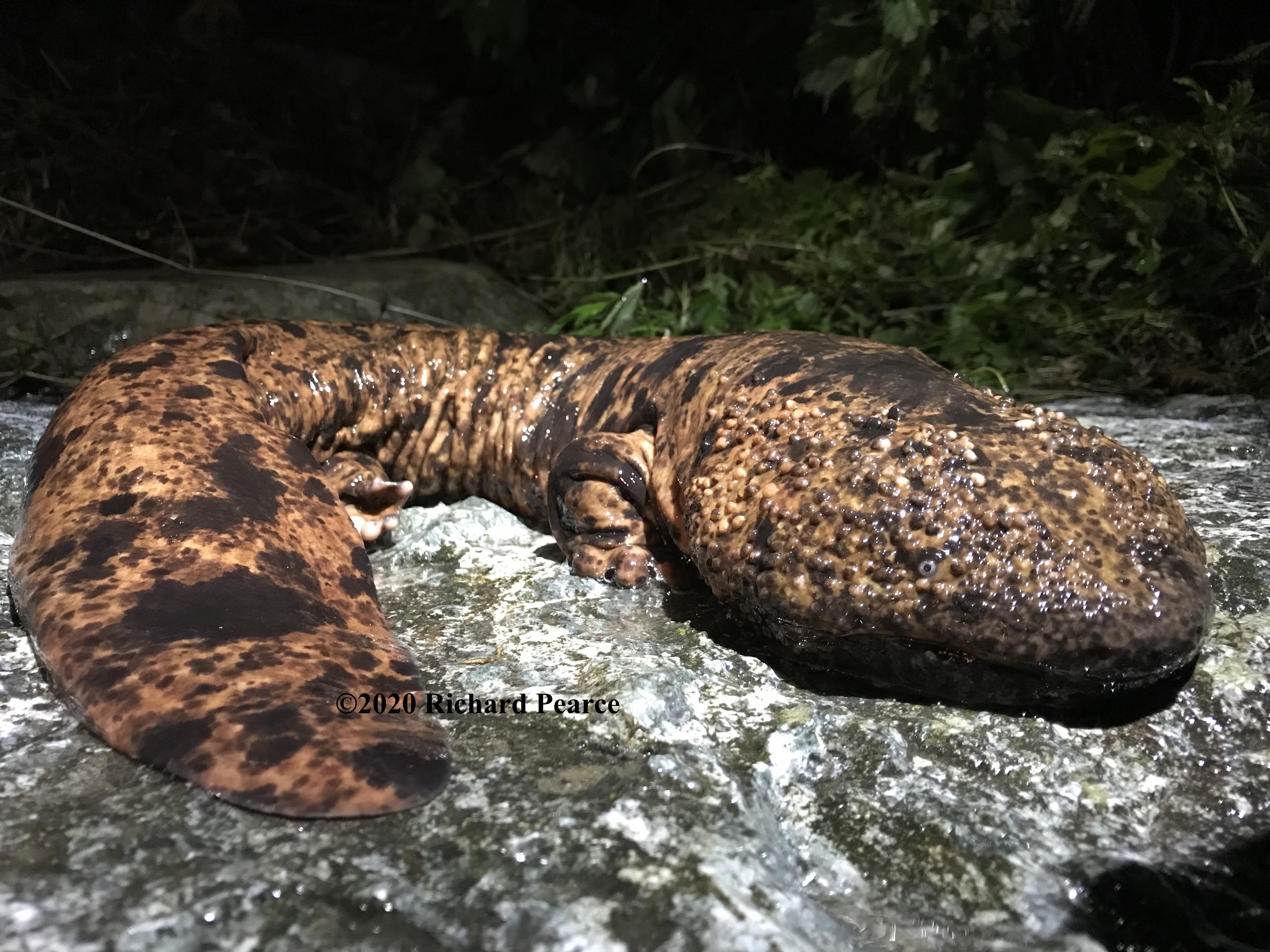 An overview of the Japanese giant salamander

The Japanese giant salamander is a very special creature. It is a large amphibian that can only be found in some of Japan’s rivers. It is one of only three remaining members of the Cryptobranchidae family, which are the largest living amphibians known today. Their biology has hardly changed in millions of years, earning them the title of “living dinosaurs.” The Japanese giant salamander is considered the second largest in this family and can grow up to 1.5 m in length, only slightly smaller than its closely related cousin, the Chinese giant salamander. The Hellbender of the eastern United States is the third, smaller member of the family, growing up to 74 cm in length.

They are generally active at night, relying on smell and touch to locate prey such as fresh-water crab, fish, frogs, and insects, catching them with a rapid sideways snap of the mouth. The salamander has an extremely slow metabolism and can go for several weeks without eating. This species’ large size and the lack of gills in fully developed adults are thought to confine them to cold, fast-flowing water, where oxygen is in good supply.

Mid-August to mid-September marks the breeding season of the Japanese giant salamanders. During this time, large males wait inside their dens for females to enter and spawn. Once a female lays her eggs, the males fertilizes them with his sperm. It is possible for several females to enter a single den to lay their eggs. Once the spawning takes place, the male alone takes care of the eggs and larvae for a period of around six months. For this reason, the males are known as “nushi” (meaning “den master”).

The status of Japanese giant salamanders in the wild

Japanese giant salamanders became a nationally protected species under the “Special Natural Monument” designation in 1952. This was an important step in preventing Japanese giant salamanders from being harvested for food. However, even though it is illegal for anyone other than licensed researchers to handle or catch giant salamanders, their habitats often have no formal protection at all. If their precious habitats are degraded or destroyed, the salamanders cannot and will not survive. And that is where we find ourselves now.

The Japanese giant salamander is currently listed as “vulnerable” in the Ministry of Environment’s Red List of Threatened Species. However, this only tells a part of the story.

Urgent changes are needed at local and national level

Compared to Europe and North America, animal conservation and environmental protection in Japan is a relatively new concept. Simply put, the systems presently in place in Japan are inadequate and urgent changes are needed at the national and local level. Countries such as the United States and the U.K. have a well established “top-down” approach to environmental protection. There are strict regulations and well-defined guidelines surrounding habitat protection set and enforced by the central government (“the top”). Importantly, there is a framework of strong deterrents in place, with consequences for breaking the rules, such as heavy fines and even imprisonment. Governmental environmental protection agencies are well funded and have teeth. In contrast, Japan has relied in the past on a “bottom-up” approach to environmental protection, which saw good local land management and farming practices resulting in healthy and sustainable habitats for wildlife.

I’m not at all saying that the top-down, Western approach is perfect but, from first-hand experience, I can confidently say that the environmental protection approach in Japan is dangerously outdated. The problem in Japan is largely a societal one, as by far greater importance is placed on construction and economic development than on wildlife conservation.

In the past, the “bottom-up,” locally-managed approach to environmental protection has worked just fine for Japan and, in particular, the giant salamanders. Historically, well-tended rice fields encouraged the development of a plethora of aquatic larvae which in turn provided food for freshwater crabs, frogs, fish and snakes. Such a rich environment and abundance of prey items is necessary for the giant salamanders, particularly younger and less battle-hardened ones, to prosper. However, as farming methods have modernized and the average age of farmers has increased, the excessive use of chemicals has adversely affected the health of the salamander habitats. 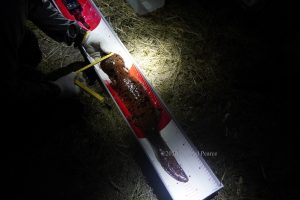 Short of ideas (and imagination) on how to support the ailing local economies, local politicians and town planners in Japan frequently green-light needless and destructive construction projects, thus accessing funds from the central government. Of course, from time to time, projects such as river-strengthening works are needed to prevent flooding. However, environmental risk assessments are all too frequently inadequate, if they happen at all.

A prime example of these “destruction works” occurred recently in arguably one of the most important habitats for the Japanese giant salamander in the world, the headwaters of the Hino River. Dr. Okada, the world’s leading authority on Japanese giant salamanders, has studied this area extensively over two decades. A long-planned and frequently-postponed forest road upgrade and extension project was given the go-ahead by the local government. Despite Dr. Okada’s attempts to halt it, work began on the project, and parts of the river were diverted through concrete channels. Preparations to send large stretches through a concrete pipe were made and only delayed by Dr. Okada’s pleas to wait at least until after spring to increase the previous year’s larvae’s chance of survival. I simply couldn’t believe it. This project was despite all our hard work in attracting visitors from all over the world to help conserve the salamanders, and the town promoting itself as “salamander friendly.”

Flabbergasted, I got in touch with my contacts at the Ministry of Environment and organized an extraordinary meeting between them and the local stakeholders. I’m very happy to say that following the meeting (and once the local people became aware of everything that was going on and voiced their displeasure at it), the construction project was halted all together. Since then, an “Ecotourism Committee” has been established, so there are some signs of progress.

Why are giant salamanders important in Japan?

Japanese giant salamanders are at the top of the food chain in their environment. It would be a huge tragedy if they were to become extinct because of human activity, especially when much of the habit destruction is completely unnecessary. By conserving them, we can protect their whole habitat and everything in them. We hope that by educating people about the importance of protecting local wildlife, local people will hold their elected officials accountable for how and where their tax dollars are spent.

In the summer of 2017, I was approached by representatives from The Ministry of Environment charged with promoting the Daisen-Oki National Park. They asked me for assistance in establishing a Japanese giant salamander-related eco-tourism project in the area. They had tried a couple of times before but hadn’t been able to get it off the ground. As a local wildlife enthusiast, I jumped at the chance of leading the project. Thankfully, this time the project has been successful and we have welcomed guests to Daisen-Oki from all the world. For many wildlife fans, the Japanese giant salamander is a “bucket list” animal. Through this eco-tourism project, we have collected a great deal of important data to support Dr. Okada’s essential work.

Through taking part in our conservation experience, our guests can experience conducting genuine fieldwork with Dr. Okada. He is a legend in his field of expertise and spending time with him in the field is a real privilege. My role is managing logistics and explaining in English some of the many things I have learned about the salamanders from spending lots of time in the field with Dr. Okada. During daylight hours we can see the habitat and perhaps find a salamander and return to our base for an informative lecture/presentation about the salamanders. After enjoying a locally made vegan bento box, we put on headlights and waders and get into the river in search of Japanese giant salamanders. Nothing is guaranteed in nature, but we have found at least 3 individuals on each tour so far. When we find any salamanders, we record their biometrics before releasing them safely back into the wild. Please visit our website Bushido Japan for further information. 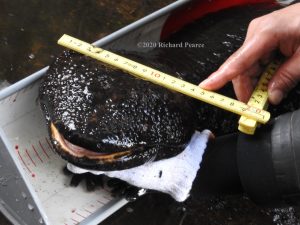 How I got into salamander conservation

I studied Environmental Management at university and have volunteered in wildlife conservation in Tanzania and Madagascar. In 2009 I qualified as a Field Guide (Safari Guide) in South Africa which was a dream of mine since I was a small boy. In Japan, I worked as a Tour Leader which involved leading groups of non-Japanese around the country for up to two weeks at a time. This gave me valuable experience of the workings of the inbound tourism industry in Japan.

I applied these lessons to the salamander project to make a viable and sustainable ecotourism service that is priced according to demand and supply. Relying on volunteers for important projects is unsustainable in the long term, so I deemed it important that those involved were modestly compensated for their time. Dr. Okada’s research is largely self-funded, so I wanted to pay for the data collection itself and also boost his income so that he is able to continue his hard and important work.

It was also clear to me that we should focus on the American market, as ecotourism and wildlife conservation is well-established there. Domestically, ecotourism hasn’t really taken off in Japan yet. More than 90 percent of our guests to date have flown in from the U.S. with the prime objective of taking part in our experience. However, since the start of the COVID-19 pandemic (we have been able to continue most of our activities, with precautions in place), foreigners based in Japan have begun visiting us more and more.

Advice for anyone wanting to get involved!

Firstly, please come and join us in the field if you can! We are now working on a new project called “Save the Nawa Salamanders.” Research and conservation measures for the Japanese giant salamanders are desperately needed in the Nawa River. Please check our website for news about that and how you can help.

Furthermore, if you have any skills that might be useful in spreading the word and raising awareness, please do get in touch. This could be graphic design skills, marketing experience, etc. If in doubt, please ask!

Richard Pearce hails from The Cotswolds, England, and was a Tottori JET from 2006-2008. He returned to Mount Daisen, his home-from-home, in Tottori Prefecture in 2010 and has been there ever since working in the tourism industry. He is Company Director of Bushido Adventure Travel Ltd and Owner of Bushido Japanese Language and Culture School and Richiyado Guesthouse.