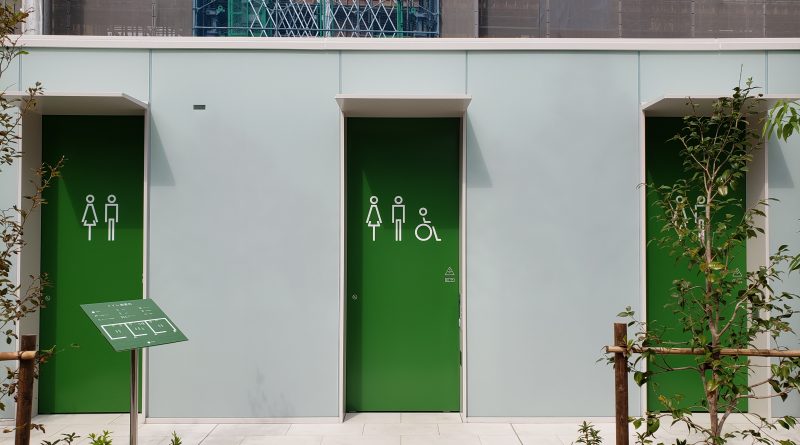 A Cycling Tour Where Bathroom Breaks are the Main Attraction

One out of four people in Japan face a disability of some kind, and, as the country ages, this proportion will continue to rise. On top of this, as the country ambitiously aims to welcome several million more tourists for the Olympics next year, the capital city will have to accommodate for the needs of a diverse range of people. These needs, of course, extend even to something as basic as going to the toilet.

In recent months, “THE TOKYO TOILET” project, initiated by the Shibuya Ward, has been aiming to address this need for more public restrooms throughout the city with revolutionary toilet designs. As the initiative states, “Toilets are the symbol of Japan’s world-renowned hospitality culture” (1), in which each toilet designed by a renowned Japanese architect presents solutions to some of the social stigmas often associated with a public restroom. Accompanied by some cycle-savvy JETs, we went to explore these new toilets one by one through the streets of Tōkyō.

On one of the last remaining warm, sunny days of September, we chose to embark upon our bicycle toilet tour from Nishihara Itchōme Park. The toilets, designed by Takenosuke Sakakura, were a series of simple cubicles with opaque glass walls that are illuminated like lanterns for the park users during the night. As the interior walls are glazed with illustrations of forest trees finished on the opaque glass, the space is lit with natural sunlight that makes the facilities feel less claustrophobic from the inside.

This toilet introduced the common theme that we saw amongst all the facilities: the “だれでもトイレ (everyone’s toilet).” As the name suggests, these gender-neutral, multipurpose toilets have additional features that benefit a diverse range of individual needs, which would otherwise be absent within a conventional gendered layout. Such features include an ostomate (a discharge sink for ostomy patients), wheelchair-accessible bars, a bidet for Muslim patrons, baby chairs and care stations, a children’s toilet and changing stations, a care bed, and facilities for expecting mothers. Such a toilet design carries the fundamental concept of accessible design principles, whereby catering to the needs of a minority group of people improves the overall user experience for the wider population (the wheelchair-accessible ramp allowing access to prams and trollies is a common example).

Therefore, the multi-purpose toilet not only provides a space for the gender diverse, but also allows other users to comfortably use the space in which a gendered bathroom layout would usually cause impediments. Common examples of groups who may benefit from this design include nurses caring for a patient, or a parent caring for a child of a different gender. Such people can avoid potentially uncomfortable interactions when using ordinary, binary gendered bathrooms.

Another piece of positive feedback received was how demarcating the space as ‘multipurpose’ indicated the pragmatic necessity of a gender-neutral toilet without specifically focusing on the issues of gender identity.

Building on the topic of accessibility, the transparent toilets at Haru no Ogawa Community Park and Yoyogi Fukamachi Mini Park challenge the issues of privacy within a public toilet. Designed by Shigeru Ban, the design motivation was to remove the uncomfortable associations commonly associated with public restrooms. Three colourful glass cubicles allow people to recognise the availability and conditions of the toilet instantly from the outside. When the toilet is in use, a mechanism ensures the glass box turns opaque once the door has been locked.

The Transparent Toilets had a nice design touch, where the colour scheme of the glass cubicles matched the surrounding use of the park. One park designated for sports used a mix of greens, teals, and yellow to match the field, while the toilet in the children’s playground had bright reds and purples to match the playground equipment. The interior was finished with mirrors and reflective steel that created an infinity toilet effect, which further added to the surreal experience while making the space feel larger than reality.

After cycling towards Miyashita Kōen, we encountered the asagao (Japanese morning glory) shaped toilet, designed by Tadao Ando. Based on the concept of the engawa (covered exterior wooden deck), the roof overhangs around the entire perimeter of the circular structure, creating a brief resting spot from the elements for people waiting in line. This prevents any side of the toilet from looking undesirable from the outside. The interior is dark. The walls are finished with an opaque purple glass between a series of slits within the walls, and as you walk inside, the gradual transition from light to dark makes the simple exercise of entering and exiting a public toilet an aesthetic experience. 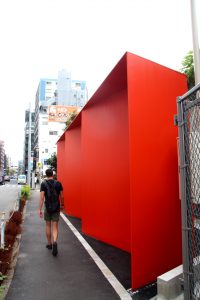 Cutting through the scramble square, we arrived at our final few toilets around Ebisu. The Higashi Sanchōme toilet was a vermillion steel tetrahedron designed to adapt to its tight and challeng-ing site. Despite its very small area, it still managed to fulfil all necessary toilet functions, which was a testament to just how small and simple toilets can be, while still being accommodating. As a design influenced almost entirely by the surrounding street, the toilet manages to advertise itself with its abstract shape, while fitting flawlessly in with its surroundings.

The toilet in the Ebisu East Park, or the Octopus Park, designed by Fumihiko Maki, is treated as a pleasant resting space that is integrated into the park, rather than a designated ‘building.’ The white toilets covered by a single steel plate roof are oriented around a small zen garden with rocks and trees in the middle. With natural light beaming from the hole in the center of the roof, this allows the space to still be used, even if its users aren’t planning to use the restroom. In addition, a steel bench folds out from the side to allow its perimeter to still be pleasantly accessible. The fact that children are playing with toys right next to a toilet is a testament to how it’s now become a park feature.

Although the above toilets are elegant and novel, a key critique to make among all the toilet designs is how they have underestimated the harshness of the elements and the city. It has been less than a month since construction was completed, and the white walls and glass finishes are beginning to show bruises and cracks. Although these toilets are constantly maintained by dedicated staff, it could very much be a matter of time before these toilets experience enough permanent damage to end up in the same undesirable state of the public toilet that they were trying to avoid initially.

It is for this reason that the final toilet that we observed was seen as the most successful public toilet design, for addressing the functional requirements of durability within its design concept. Entertainingly named ‘Wonderwall,’ the main influence came from the concept of a 川屋 (or 側屋), read as kawaya, which is a small wooden hut that stood over the river during the neolithic Jōmon era. The design intends to strip the toilet back to its most primitive state: a series of thick concrete timber formwork walls that separate the inside from the outside. The ambiguity of its overall shape changes the impression from the conventional connotations of a ‘toilet’ to a piece of abstract public art or playground to be interacted with. Not only is the material of the wall stimulating to the senses, it also provides a permanence that ensures its reliability.

Although all of these toilets addressed different problems associated with public bathroom design in very unique and novel ways, a common issue kept recurring, which was surprisingly unexplored as a design theme within any of the toilets. The issue was how each space was conventionally gendered with the retrospectively outdated signs of a ‘man wearing pants,’ ‘woman wearing a dress,’ and a torso with a plus sign indicating the gender-neutral multifunctional toilet. Creating these social separations actually affected the sense of freedom of being able to use any toilet that makes you feel comfortable, to the point where it hindered the accessibility of the spaces.

When visiting the transparent toilets, for example, one of the three singular cubicles designated as the male bathroom was completely out of order. We asked ourselves whether a situation like this requires an intrusive ‘reassigning’ of genders on the spot, or does it mean the multifunctional toilet must now sustain twice its capacity? Furthermore, the fact that you can see a urinal, powder room, or a baby changing station through the transparent glass was a much clearer indicator of what the toilet can provide than any arbitrary symbol assigned to that particular space. For a father needing to help with his child’s makeup, or a mother needing to help her child urinate standing, the process of gendering and othering these spaces creates the same problems of having to uncomfortably breach these spaces which are socially segregated. The most pragmatic solution, therefore, seemed to be labelling spaces based on their function, with pictograms of toilet facilities rather than over-gendering people.

As the urbanist Jane Jacobs said, “Cities have the capability of providing something for everybody, only because, and only when, they are created by everybody” (2). Despite the above-mentioned doubts, these designs do allow a diverse range of people to express their identity, and establish new social conventions within public places. They achieve all of this while manifesting as none other than a humble toilet. These uniquely Japanese design solutions are well worth experiencing while you’re in Tōkyō, no matter what your fluid (or fibre) intake is.

Ben works as an architect in Tōkyō, but sometimes feels like he is employed as the token foreigner/English speaker to make the company look good. Outside of his job, he enjoys exploring Japan’s outstanding architecture, both old and new. 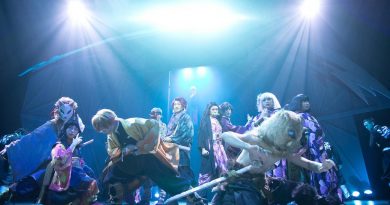 The World of Anime Stage Shows 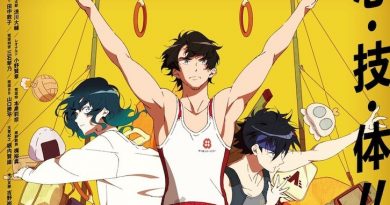