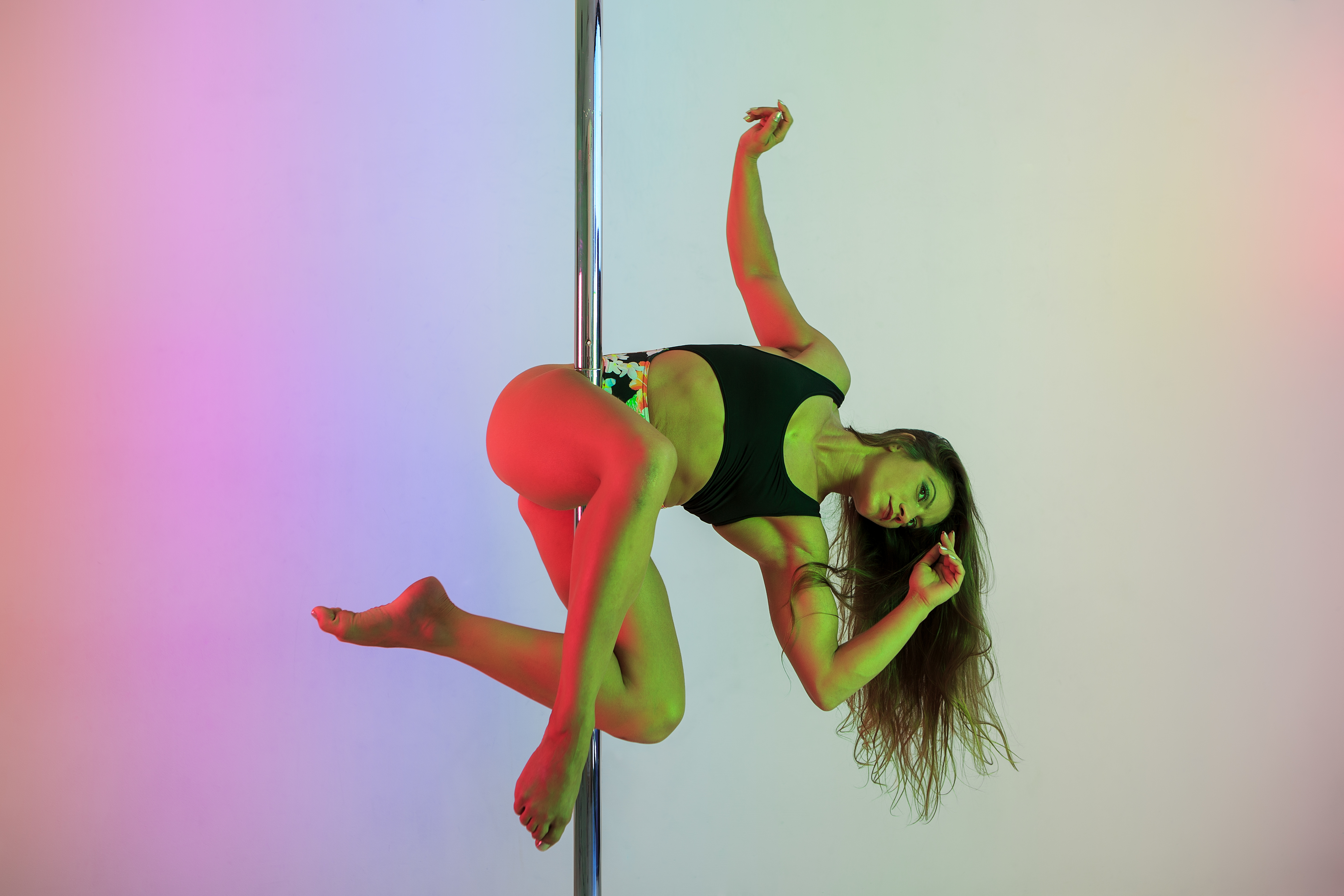 I began pole dancing about three years ago at a very small local studio in Bloomington, Indiana, USA. What started as a mild curiosity mixed with a desperate attempt to lose weight quickly turned out to be one of the best decisions of my life. After struggling awkwardly through my first few beginner lessons (believe me, that giant pole is intimidating, and you don’t really know what to do with your hands), I was hooked like a junkie. Still, it wasn’t always sunshine and rainbows.

At first, I was really nervous because pole dancing has a certain stigma attached to it. When you pick up a basket weaving hobby or decide to learn how to bake, everyone is extremely supportive. If I told my friends I was going to the gym instead of the pole dancing studio, they would have been ecstatic! Whenever I told my friends that I started pole dancing, however, they all gave me the same concerned look. It was as if I was about to drop out of college and work as a dancer at a gentlemen’s club. Not that there would be anything wrong with that had I chosen that path. I found myself constantly facing concerned looks and questions about the appropriateness of my new favorite hobby, and I couldn’t help but find it a bit discouraging.

The women and men I’ve met in this community are some of the strongest, most inspiring athletes I’ve ever met. And yes, pole dancers are undoubtedly athletes. Have you ever seen someone support their entire body weight with just one arm or leg while suspended in mid-air? Because I have. A professional pole dancer has complete mastery over every muscle in their body—muscles I didn’t even know existed previously! It’s an incredible way to tone and strengthen your body, and I think that fact sometimes gets lost in fantasies of strip clubs and bachelor parties.

The pole dancing community is not only extremely empowering, but it is also extremely inclusive. Like with any community, there exists a strong and unique culture, which sometimes acts as a barrier for people looking to get started. There can be fear of being rejected, laughed at, or not being good enough. However, I’d like to dispel some of the top concerns that I’ve heard from people who wanted to try pole dancing but were too nervous.

First, with a myriad of beginner courses available with helpful and friendly instructors, it’s extremely beginner-friendly. No one is going to judge you for awkwardly messing up the most basic pole spin. Instead, they’re going to quickly jump to your aid and be cheering the loudest when you finally nail it!

There’s absolutely no stigma against complete beginners in pole dancing. Second, some people have mentioned to me that they believe they’re too overweight to begin pole dancing. They see photos of slim, fit, beautiful women in scantily clad outfits and find it intimidating. But, pole dancing is available to anyone. I’ve said it before, and I’ll say it again. Anyone. No matter your gender, weight, or anything. The pole will support your weight regardless of what it is, and your muscles will get stronger each time. Lastly, as I just mentioned earlier, gender is not an issue. There are plenty of male pole dancers all around the world! In fact, my very first instructor was male. It does not matter what gender, if any, you identify as. Pole dancing is for you.

Now that we got those myths out of the way, I’ll mention one last reason that pole dancing changed my life. Like any other form of dance, pole dancing is extremely creative. While there are standard moves with names that you’ll learn through classes or a quick Google search, it’s really open to creative design. You can switch things up, swap out moves, or invent your own if you’re really feeling yourself that day! Moves can be modified, reversed, or anything that you can think of. Just put on a song that makes you want to swing your hips and have fun!

When I’m not in a studio, I miss it constantly. After moving to Japan initially, I spent a small amount of time living in the countryside, where I was lucky to find even a grocery store within twenty minutes, let alone a pole dancing studio. In fact, one of the primary motivating factors in my decision to move to Tōkyō was the availability of world-class pole dancing studios. The opportunity to be taught by instructors who hold world titles and who have even worked for Cirque Du Soleil was far too good to pass up. Within days of getting back into a studio, I felt my mental health and self-esteem skyrocket back to where they used to be.

Despite living in Japan, it was quite easy to find a studio that offered instruction in English. Nothing that a three-minute Google search couldn’t solve. I was surprised by how foreigner-friendly even the absolute beginner classes were! At least 50% of my classmates were foreigners, and the instructors all knew English. However, this is a perk of living in the city center. If you live outside of Tōkyō, maybe somewhere more rural like my previous town in Ibaraki, it can be difficult to find such a specific type of dance studio with the right equipment. However, there are several things you can do instead if there’s not a studio near you. You can buy your own pole easily on Amazon and install it in your house (it’s not terribly expensive and is usually easy to install if you have any extra space) and watch YouTube tutorial videos! If you don’t have enough space in your apartment, you can try a different type of dance first. I managed to find an amazing Jazz and Modern Dance studio before moving to Tōkyō that taught me a lot about how to move my body in a more graceful manner, which has helped my pole dancing a lot. Pole actually incorporates lots of different types of dance choreography, so it’s definitely fine to start with something else in order to feel comfortable
moving your body, getting in shape, and training your muscles.

In Japan, I feel that pole dancing has become increasingly popular as a form of exercise among young women. Some studios have even gone so far as to label their pole classes as “fitness classes.” Whether this is a preemptive attempt to avoid any sort of stigma or is genuinely their main focus, it really doesn’t matter.

I see many young Japanese women signing up for these classes with the goal of losing weight, building muscle, and feeling sexy. For a more traditionally conservative country, this surprised me; but, it’s a good sign, and I hope that they’ll set an example for others to follow.

To this day, I’m still not sure how to share my number one passion with my own family for fear of their reactions. I’m sharing my experience now in the hopes that more and more young women and men can find the same empowerment and comfort through pole dancing without fear of judgement. I can’t wait for the day that pole dancing is more popular or at least less stigmatized, and I think we’re slowly heading in that direction. Pole dancing has improved every aspect of my life, both physically and mentally, and I wouldn’t be the person that I am today without it.

Rachel is a 24-year-old Hoosier born and raised in the United States of America. She moved to Hitachinaka, Japan, in March of 2019 to work as an assistant English teacher and now lives in Tōkyō doing operations management and content creation for her new company. She has dabbled in various types of dance from the age of 15 and also spent brief amounts of time practicing gymnastics and cheerleading.

email
From the Magazine, Lifestyledancinginclusivitypole dancing