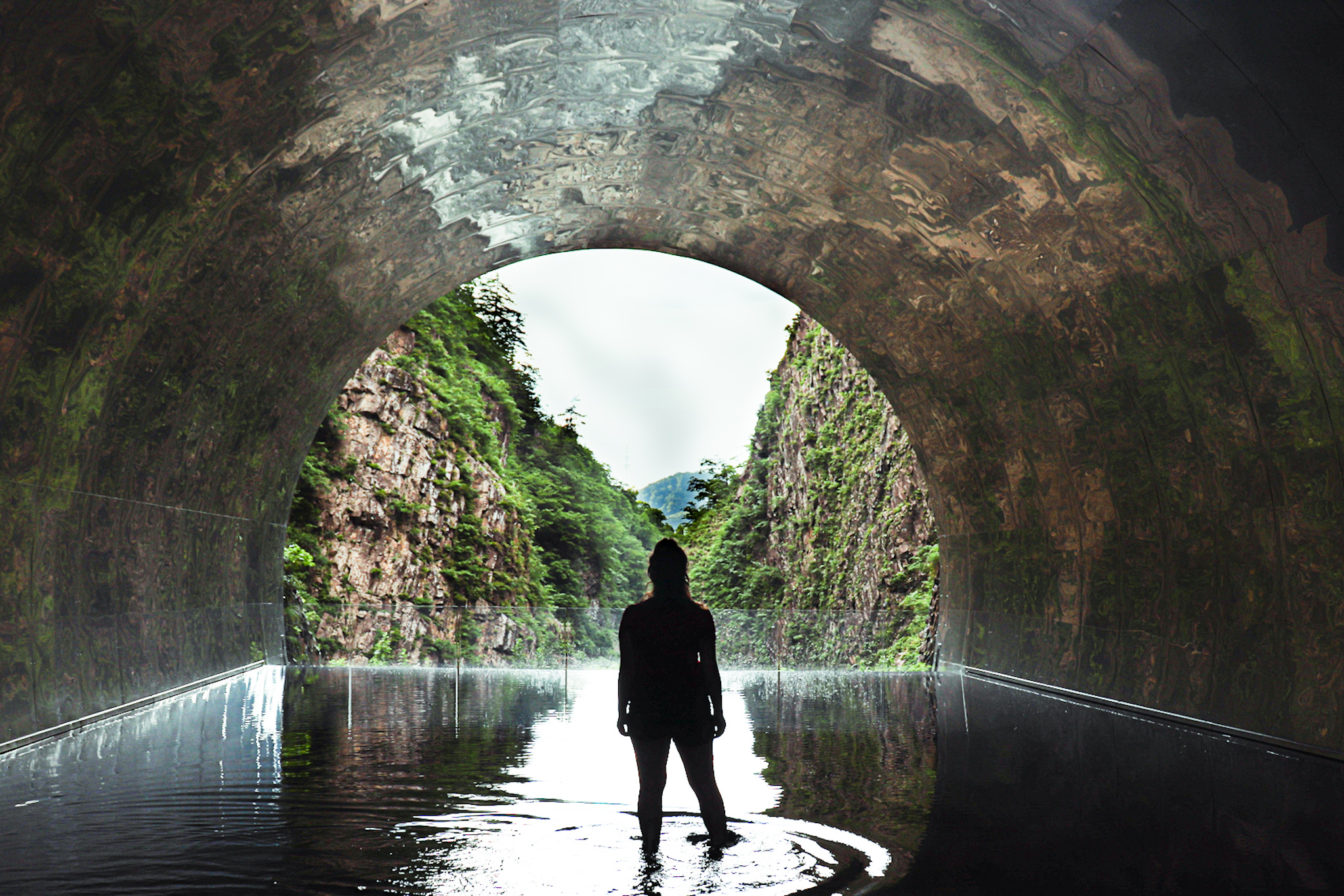 Kiyotsu Gorge in Tokamachi, Niigata is one of the “Three Great Gorges of Japan” along with Kurobe Gorge in Toyoma and Osugidani Gorge in Mie. It was designated as a National Place of Scenic Beauty and Natural Monument in 1941, and was incorporated into Joshin’etsu Kogen National Park in 1949.

The gorge has very distinctive geology, being one of the foremost places in Japan to see beautiful columnar jointing—a geological effect where cooled magma is pushed up to form stunning vertical pillars of rock. The gorge was closed to visitors in 1988 because of a deadly falling rocks incident, but was reopened when the Kiyotsu Gorge Tunnel was completed in 1996. Visitors could use the tunnel to more safely enjoy the scenery of the valley.

In 2018, the tunnel was revitalized by Chinese artist Ma Yansong. With the help of the MAD Architects group, the tunnel was transformed into a 750 meter long art installation and became the crown jewel of the Echigo-Yuzawa Art Field, which is also the site of the Echigo Tsumari Triennale being held now.

The area around Kiyotsu Gorge gives no hint as to what is actually in the tunnel. The drive to the gorge is lovely, winding through mountains and along the river, past small farms and rural houses. After parking, you walk through a small onsen town area. There are historic buildings with snacks and omiyage, and small hot spring inns to stay at. Even when you first enter the tunnel, nothing seems unusual. There’s an area explaining the geologic history of the region shortly after entering, and an outlook highlighting the columnar jointing of the valley a little further in. That’s when things start to change. The tunnel gets dimmer, and is lit with sections of bright color—blocks of green, blue, yellow and magenta all flowing into each other. Each part of the tunnel installation corresponds to an element—wood, earth, metal, fire, and water. These colored sections of the tunnel are supposed to help define the lookout points, and signify each element represented.

The first area past the basic overlook is another window into the gorge. It’s brightly lit, and seems simple, except for a mysterious silver pod in the middle of the room. The pod is completely reflective, and looks like a creatively parked spaceship. The installation is called the “Invisible Bubble” and represents the metal element. In reality, this is no lost alien transport. It’s a toilet. The outside is completely reflective and can’t be looked into, but a person sitting inside can clearly see the outside. It’s . . . an interesting experience to use the toilet and be able to watch the people around you wander around and investigate the pod you’re sitting in, to say the least.

The next lookout is an area covered in circular mirrors backed by an orange glow. This area is called “The Drop” and represents fire. If you have trypophobia (a fear of closely-packed holes), this definitely isn’t the room for you. After you get over the weirdness of the whole effect, it’s fun to play with looking at the people and views around you through all the mirrors.

The final lookout is the panorama view, and is named “The Light Cave.” Without a doubt, this is the highlight of the entire installation. The Light Cave represents water. It’s a wide room that looks out on a stunning view of the entire valley. The sides and roof are covered with reflective stainless steel and there is a stone pool of shallow water spanning across most of the room. When you stand in the center, the landscape is reflected in all dimensions around you, making you feel both enclosed and like you’re standing on the brink of something incredibly open and wide. It’s an illusion of being both inside and out at the same time—bringing something huge in to make it small, and stunning you with its magnitude when it’s viewed without reflection.

Emerging from the Tunnel

The walk back out of the tunnel was strange. Walking past the installations knowing what they would be lent me an entirely different outlook from encountering them for the first time. I couldn’t get the view from the Light Cave out of my head, and wished I could have stood there to admire it all for longer. Exiting the tunnel was like coming out of a daydream and back into reality, a startling reminder of where I was and what I was doing when I wasn’t admiring odd space toilets in tunnels. My only regret was arriving too late in the day to see the installation for the final element, wood. The visitor’s center and cafe located outside the tunnel has a footbath on the upper floor where the roof is made of cedar, and spirals upwards to a reflective mirror at the apex. This installation is called “the Periscope.” Perhaps in the fall, I’ll take another wander through it all again.

The Tunnel of Light costs 800円 to enter and is open from 8:30 to 5, last entry is at 4:30. Parking is free. For more information, you can visit this website.

Linka Wade is a third year ALT in Gunma prefecture from Monterey, California. She lives with her husband and two guinea pigs deep in the inaka. In her free time she loves traveling and exploring onsen. You can get out her blog here or on Instagram @linkaslens.

email
Arts, From the MagazineGorgesNational Place of Scenic Beauty and Natural MonumentNiigataTokamachi