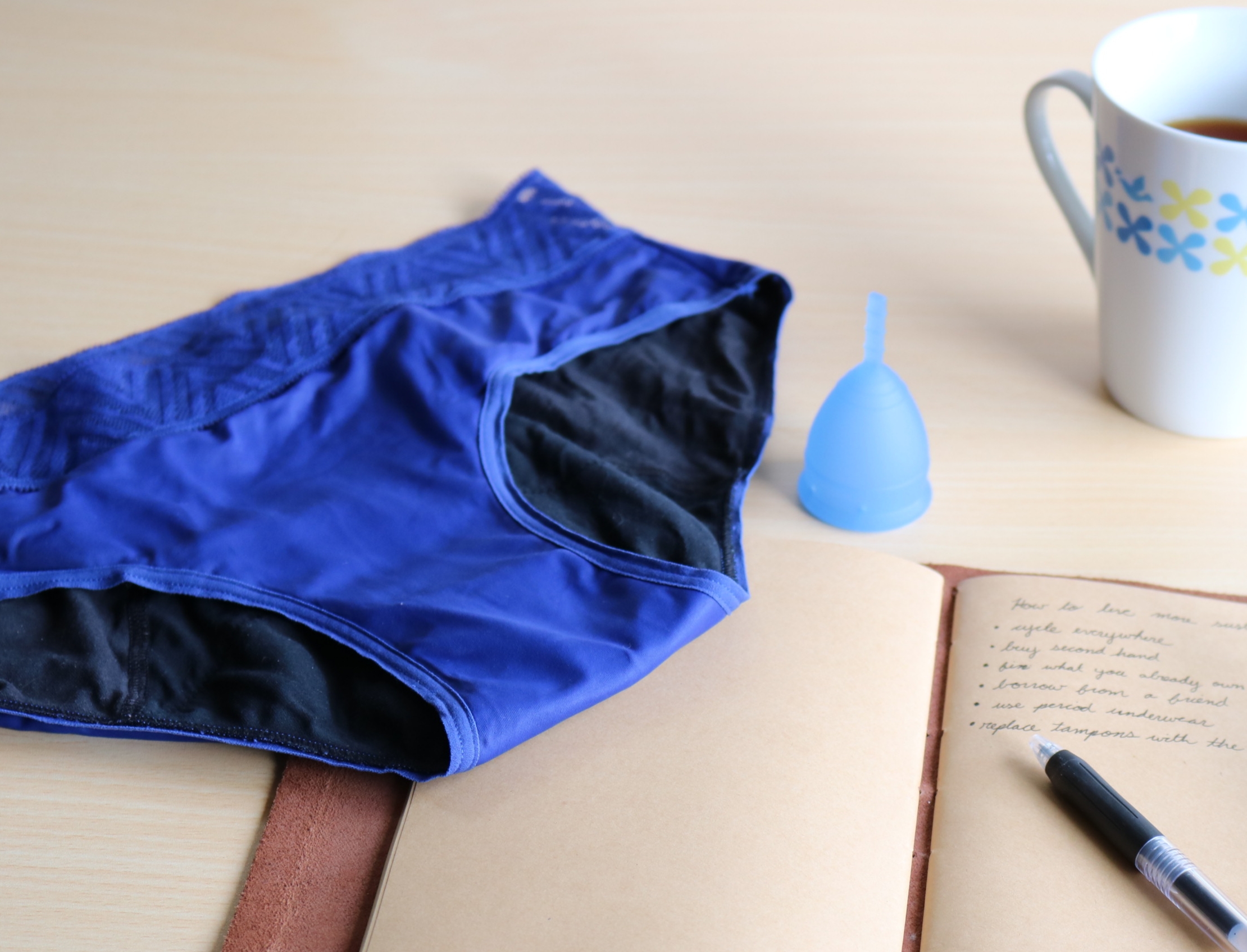 Talking about periods can be uncomfortable. I would know, I used to teach 10 and 11-year-olds sex education! A few years ago, a student in my co-workers’ class was less than impressed when she learned that menstrual flow can last 5-7 days. This seemed like a huge inconvenience to her. So, after thinking it over, she announced, “When I get my period, I’m just going to pee it all out!” Sadly, that’s not an option, so let’s talk through what we can do!

I started out, as most of us who menstruate do, using liners and tampons. These are super convenient but terrible for the environment. In fact, the average pack of pads contains the equivalent of four plastic bags. There are some companies that produce liners and tampons from organic cotton, which is a better option but still creates a lot of waste. Plus, cotton is very resource-intensive to grow as it requires a lot of water. The three most environmentally friendly options are the cup, period underwear, and reusable pads. All three are better for the environment, assuming you stick with them and continue to reuse them. However, they still come with their advantages and disadvantages. . . .

Menstrual cups are made of medical-grade silicone. They’re the best option, environmentally speaking, because one cup can be used throughout an entire menstrual cycle. It just needs to be rinsed out and reinserted regularly. At the end of the cycle, it should be disinfected by cleaning with soap and boiling in water. One of the downsides to the cup is comfort. Some people find it difficult to insert or take out, but most people find that it gets much easier and comfortable after being used a few times. Many people also find this option less convenient if they need to reinsert in a public washroom. Not everyone feels bold enough to rinse out their cup in a public sink! Even so, this option is by far the most cost-effective. One cup costs around 4000 yen and will last for years when well cared for.

Reusable pads work similarly to disposable pads but, rather than being sticky, most reusable pads are secured with a snap. In online reviews, many people say that they find reusable pads to be much more comfortable than disposable ones. This is because they lack the plastic feel of their disposable counterparts, instead using cotton, which molds to your body more easily. Cloth pads are less expensive than period underwear, yet less economical because of the need for multiple pads per cycle. Prices typically range between 1500 yen for a liner to 2400 yen for the most absorbent pads. Reusable pads are a good option for those who experience a heavier flow as many can hold the equivalent of four tampons. With that being said, there’s no real downside to reusable pads compared to disposables, except the fact that you will have to wash them. Reusable pads can be pre-rinsed than washed in the washing machine and many brands can even be thrown in the dryer making them pretty hassle-free!

There are many brands of period underwear available. As period underwear is becoming more popular, brands are offering a wider selection of sizes, styles, and colors. Some period underwear is only meant to be worn as a back-up to give the wearer leak protection, but there are also styles that can hold the same amount as four tampons can. An advantage of period underwear is that it can be worn for most of the day, meaning no awkward rinsing out like with the cup—and they’re less bulky than reusable pads. Period underwear should be pre-rinsed then washed in the laundry on a gentle cycle and hung to dry. This is a little bit more work than most disposable products, but I would like to think most people are laundering their underwear after each wear anyway! The downside to period underwear is the cost. One pair can range between 4000 to 6000 yen and unless you want to do a lot of laundry, I’m guessing you will need more than one pair.

Personally, I have tried both the cup and period underwear. The cup takes some getting used to in terms of insertion, but I was surprised that once it was in, I hardly knew it was there. As a back-up I always wear a pair of period underwear with my cup, but so far, I have never had a leak. On days when my flow is lighter, I wear only my period underwear. I find my period underwear to be a lot more comfortable than wearing a pad. I also like that I don’t have to worry about leaving them on for too long, compared to the risk of getting Toxic Shock Syndrome if a tampon is inserted for too long! Even when I am being active, such as riding my bike or hanging upside down at the bouldering gym, I feel covered by my period underwear and I haven’t had any leaks.
After experiencing the convenience of period underwear, I wouldn’t go back to disposable products. Now, I never have to worry about an emergency trip to the drugstore because I have run out of supplies. I also feel a lot better knowing that I am not sending products to the landfill every month.

Making the switch to reusable products is an investment. But if you can find a product that you are willing to use over and over it will save you money in the long run. If you’re buying a cup, I recommend reviewing multiple brands and styles to decide which one will be the best fit for you. There are also many different brands of period underwear and reusable pads that cater to all shapes, sizes and needs. So, if you choose to purchase period underwear I would recommend doing some research. There are a lot of brands out there and not all of them are made equally. One of the biggest things to look for is how long the absorbent part of the gusset extends. Some brands only have a protective lining where the typical gusset of your underwear would be. This is helpful if you are using the underwear for leak protection during the day, but pointless if you want to sleep in them.

The next thing to look for is fit. I would recommend only ordering one pair at a time of each style so you can decide if you like the fit before you really commit. When I made the switch to period underwear I tried three different styles. One stood out as being way more comfortable than the others so I bought it in every color. As far as how many pairs you will need, I recommend having two pairs for during the day and a third pair for at night. After that, it all depends on how often you want to do laundry!

If this article sparked any questions for you, or you want to try to convince me that reusable pads are actually the best option, don’t hesitate to send me a message on Instagram. After years of teaching about puberty with the infamous question box, no question or comment can surprise me anymore.

Monica grew up on a farm near Rimbey, Alberta, Canada. Before coming to Japan, she taught Grade 5 in an elementary school. Currently, she is working as an AET at four elementary schools in Fukushima. You can usually find Monica at her local bouldering gym, or out on her road bike.