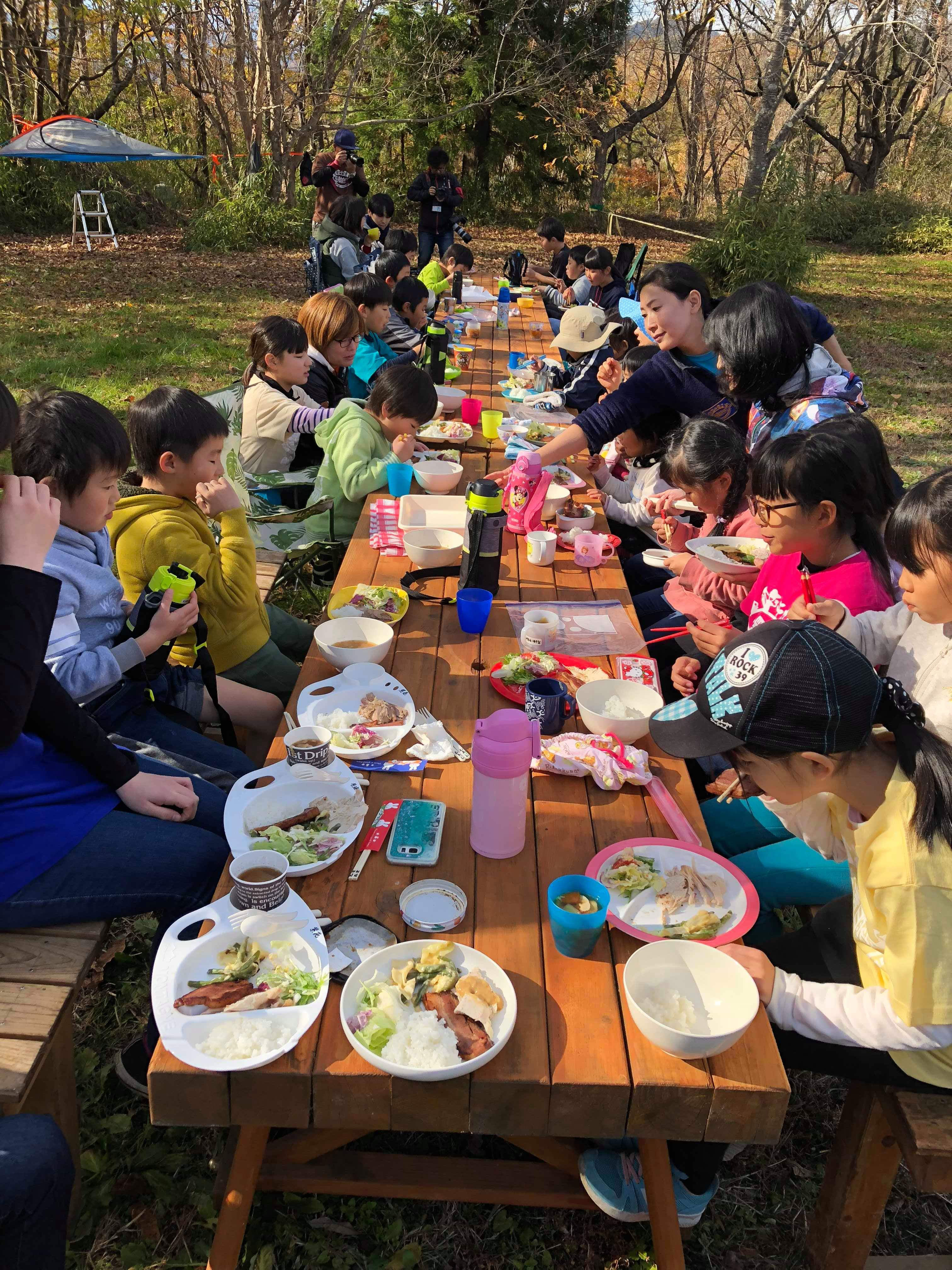 I grew up in a small country-side town in Western New York where the cows outnumbered the people and I was almost always outside. My backyard was a forest and so were most of my friend’s backyards. When it was time for dinner our moms would yell as loud as they could and hope we could still hear them. Growing up so close to nature to me meant climbing trees, starting fires, accidentally hurting yourself, sleeping outside and trying and learning things without anyone telling you what to do. It was quite different than what kids in Japan are used to today. Despite moving to another small-county town, backyards here are nearly non-existent. The kids near me, however, still live very close to nature so they must still have a lot of chances to enjoy nature right? Well, that doesn’t seem to be the case because many of the kids here I met had little to no experience with it. Eventually, a friend introduced me to a group that he has been volunteering for where kids can not only experience nature but also learn about other cultures and try new things.

Kankan Shizenmura is a non-profit organization for children. A few times a month, children meet for an experience involving nature that they might not have an opportunity to do at home or in school, including talking to staff members from foreign countries. With Kankan, children work towards becoming more understanding, to enjoy the differences in personalities, and how to become friends no matter the language, nationality, or disability. This might be one of the few times a month they have to experience nature and they have a short amount of time to try and learn something new.

Throughout the year we try things they can’t do in schools like starting fires, kayaking, cutting bamboo, water fights, climbing trees, planting & harvesting rice, learning about foreign cultures, and much more. Some of the things mentioned require a lot of thinking and are not easy to do for kids and at first, it’s hard not to give them the answer or do it for them. However, doing so robs them of the chance for the kids to figure it out for themselves.

When we need to start a fire, the kids think about the fire triangle: heat, fuel, and oxygen.

These are the three things every fire needs to start and with that knowledge and some fire-starting tools given to them, what they do next is up to them. It takes a few minutes for them to think about who should get firewood, where to get firewood, how to arrange the firewood to burn but they are making their own choices and deciding what is important to them. Children need to have some actual choice and control in their lives when they are learning. Kankan provides those opportunities for them with having the kids do things like starting a fire by themselves they can develop the ability to make appropriate choices and take responsibility and control over their own learning. They are learning to be autonomous in a way that is different from the classroom.

Kankan also holds different cultural events such as Brazilian BBQ, Halloween, and Christmas. Although many kids in Japan know about some Western holidays like Halloween and Christmas, their image of these events is different from someone from the USA or other places. During these events, the kids have a chance to get to know about these events from a different cultural perspective. Halloween, Kankan’s biggest event with over 500 people, gives kids and their parents a chance to experience the holiday in a more Western context, with costumes, face painting, apple bobbing, and trick-or-treating.

Although English is not a requirement to join or even enjoy Kankan, many kids participate in the few English activities that the organisation hosts during the year. Last March, several Kankan kids got to experience something very rare for children. During their spring vacation, they went on a trip to New Zealand, flying to another country and using a second language. That trip for them, even if short, showed the kids that the future is beyond what they can learn from a textbook or a classroom. They ate, played, laughed, slept, and talked with people who speak a different language than them. They might have even realized how similar their lives were back in Japan to the people in New Zealand, despite living in different countries.

My first experience of something like this wasn’t until university. I had lots of previous exposure to foreign countries and people throughout high school, but I realized I could never truly understand those places until I experienced them outside of the classroom. I went to Spain and became friends with people from across the world, living life like them for a couple of weeks whilst in their homes.

I think the result of these two weeks led me to Japan three years later. Then here in Japan I found Kankan, led by people who have spent major parts of their lives living in a different country, who are teaching kids about understanding and enjoying those differences between people while experiencing nature.

Logan is a third-year direct-hire working at elementary, junior high, and high school levels in Southern Nagano. His hobbies are cooking, hiking, traveling by motorcycle and working out. He also helps coach his local running team and has a clothing brand called Mukimuki Clothing.