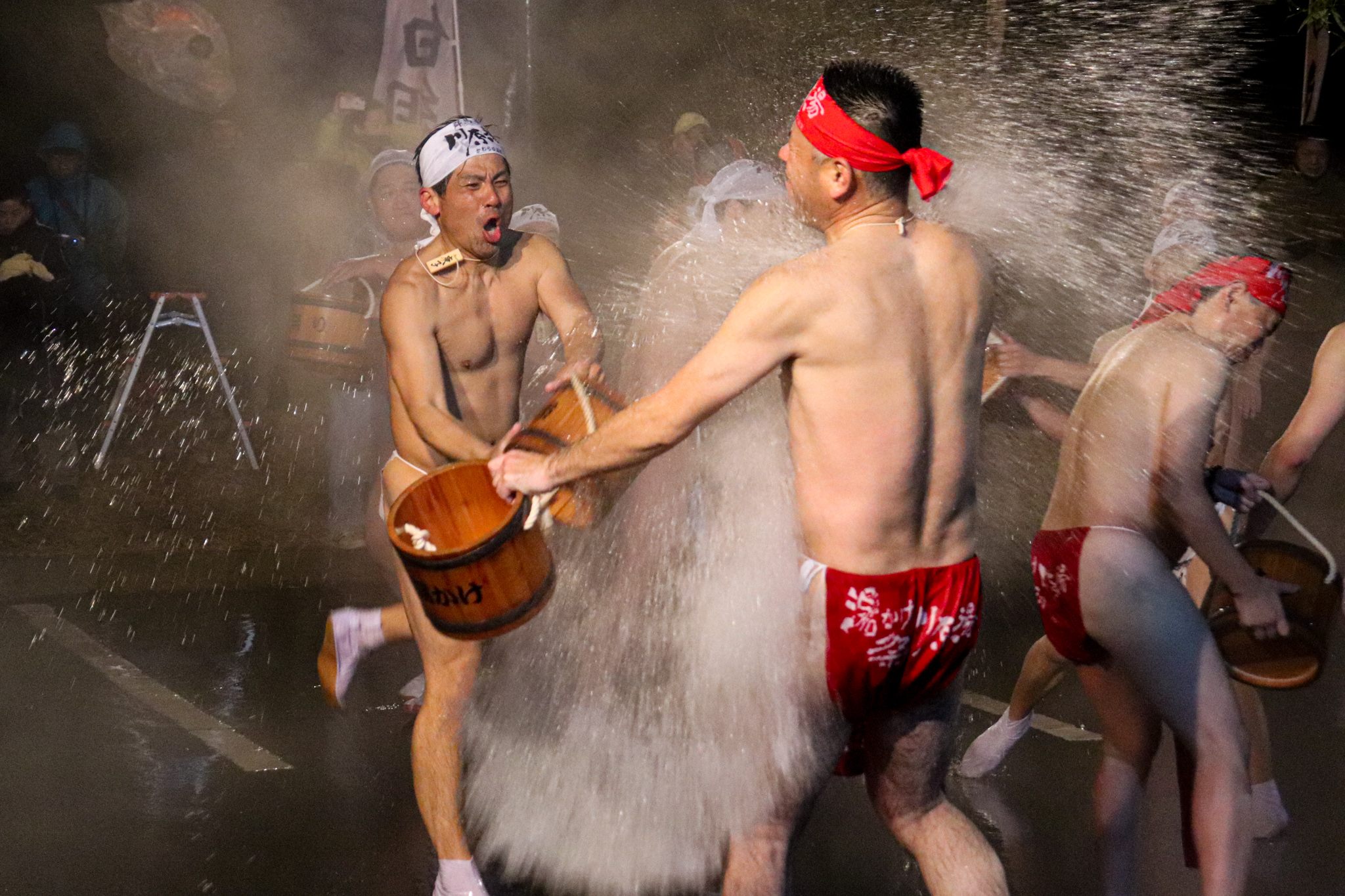 Getting naked, flinging water, and catching chickens before dawn in the dead of winter

When my alarm went off at 4:00 a.m. on Monday morning, I questioned a lot of things. For example: Why in the world am I awake at this time? Why is it so damn cold? Is there really any good reason to leave my safe futon of warmth? Normally, I’d say absolutely not but on this particular Monday, there was something I had to get up and do.

Kawarayu Onsen is a lovely little spot in Naganohara, Gunma. It’s also the annual site of one of the strangest festivals I’ve ever been to. For one thing, the festival occurs at an entirely unreasonable time—5:00 a.m. on Jan. 20. This is not a comfortable time to be up. It’s dark. It’s cold. It’s really, really cold. I came bundled up in three shirts, fleece leggings, lined jeans, a puffy winter coat, hat, scarf, gloves, and several chemical heat packs stuffed around my body. The participants of the festival came in a small scrap of cloth wrapped around their waists—a fundoshi.

The basic premise of Kawarayu Yukake is giving thanks for the hot spring. As the legend goes (or how it’s been told to me) is that approximately 450 years ago, the hot spring dried up. The locals were obviously upset about this and wanted their onsen back. Someone pointed out that the waters smelled a bit like boiled eggs, so maybe the gods that were in charge of the hot spring would like some nice chickens sacrificed to them—because why not, nothing else was working I guess. Anyway, the chickens were sacrificed, and the hot spring miraculously came back. The villagers were so overjoyed that they started scooping up the hot water and throwing it in the air, calling out “Oiwaida, oiwaida!” Which roughly means “It’s a celebration!” The festival has been celebrated on Jan. 20 ever since.

You may wonder why Naganohara has chosen to celebrate this festival on Jan. 20—also known as a really cold time of the year to be out and about in the early morning. While I don’t know why the festival calls this date home, there is some significance to it. In the olden days, way back when, Japan divided its calendar into 72 micro seasons. Jan. 20 is the beginning of Daikan (大寒), translated as “major cold.” Regardless of what the weather report says, this day was viewed as the coldest day of the year in the Japanese traditional calendar. So not only is the Kawarayu Yukake festival about getting (nearly) naked on a really cold day, it’s about doing it on the COLDEST day. Because why not.

The word yukake (湯かけ) is broken into yu—meaning hot spring water, and kake—to throw or to splash. The splashing of the water is the primary objective of the festival, but not all that’s involved. As I made my way to the onsen building (bundled up looking like a combination between a marshmallow and a burrito), the quiet of the pre-dawn air was broken by taiko drumming. A taiko group begins the festival by drumming outside the onsen. They are also very lightly clothed, wearing only traditional apron-like shirts and leggings. I once again doubt the sanity of everyone involved in this crazy ritual.

Next, two Shinto priests and two miko (巫女), shrine maidens, come out. They are accompanied by several local officials. There is a makeshift altar set up in front of the onsen, where the group performs a ceremonial thanks for the hot spring. Although I couldn’t understand any of the ceremony, it was fascinating to watch. The atmosphere grew more solemn and still as we all stood and watched. The only thing breaking this calm air were the occasional shouts of the hordes of naked men. While the drumming and ceremony took place, the participants of the festival hang out in the onsen. The goal is for them to get as warm as possible before coming out. Part of this process is that every few minutes, one of them will pop open the door and lead the rest in some excited shouting. I never figured out the purpose of this, but it was entertaining all the same. At some point, these shouts grow more excited until they culminate in the men marching out to grab bamboo rods that have been set alight. Half of the men are in white, half are in red. The teams then line up in front of the altar and are blessed by the priest. They then leave the area and march a little way off to the town square, where the spring water comes up. When they come back, the leaders of each team take a blessed bucket from the priest and lead their cheering team back into the onsen.

While the men warm up in the onsen again, the local officials crack open a ceremonial barrel of sake, because who doesn’t want a nice cup of booze in the early morning? The audience are also given mikan oranges and mochi as gifts from the shrine. Shortly afterwards, the teams emerge with buckets full of onsen water. One man wearing a purple fundoshi throws the first bucket and after that, the war is on! Red versus white. The men hurl their buckets of water at each other among shouts of “OIWAIDA! OIWAIDA!” Audience members have to be careful though—after a little while, the occasional participant will decide to throw his bucket at a TV crew or group of onlookers instead of another participant. TV crews and knowledgeable audience members come with ponchos over their parkas and plastic bags wrapped around their cameras just for this reason. Participants soon become almost invisible due to the clouds of steam rising up from their bodies and the flying water. It’s a surreal thing to be standing in the slowly breaking light of dawn, watching screaming half-naked men charging in and out of heavy clouds.

The festival culminates with the teams gathering together to throw their buckets full of water upwards to the two kusudama (decorative paper balls) hanging overhead. The balls pop open and … two chickens come tumbling down. The chickens are quickly grabbed, and the victorious chicken snatchers stand on the altar to the cheers of their teams. This year, both chickens were grabbed by members of the red team. Not to worry though, there’s no sacrificing chickens here— they are placed safely in a sacred bamboo cage. Afterwards, the participants gather in lines and do a brief chant, final prayer, and thank the audience for coming. And with that, the sun has risen and the festival is over.

This was the second year I’ve been to this festival. Last year, Jan. 20 fell on the weekend. This year, it was a Monday. Despite the day of suffering that followed, (I had to teach kindergarten that day. I was brain-dead and miserable.) I’m still very glad I came back to the festival. There’s so much packed into the roughly ninety minutes that the entire process takes place in. First, the beat of the taiko drums makes it exciting. Then, the traditional Shinto ceremony brings a feeling of solemnity and calm. Then there’s the wild joy of watching the craziness unfold. In the end, as the sky lightens up, you feel a sense of community with everyone there, even though you haven’t spoken to them at all. You all got up obscenely early and stood there in the cold and experienced this weird, wonderful thing together. So as I made my way home to get ready for work, I was shivering, exhausted, more than slightly damp and yet I could only think about how I was looking forward to doing all this again next year.

For your viewing pleasure, here is a 2-minute report on this year’s festivities from Gunma’s prefectural TV channel: GTV – Kawarayu Yukake Festival I highly recommend giving it a watch just to get a feeling of the sheer chaos that goes on here.

For the history nerds out there, here is a very cool video from the Asahi Shimbun archives. It’s a reel of the Kawarayu Yukake Festival in 1940: Asahi Shimbun – Tradition of hot-spring festival, captured in 1940 film reel, carries on in Gunma.