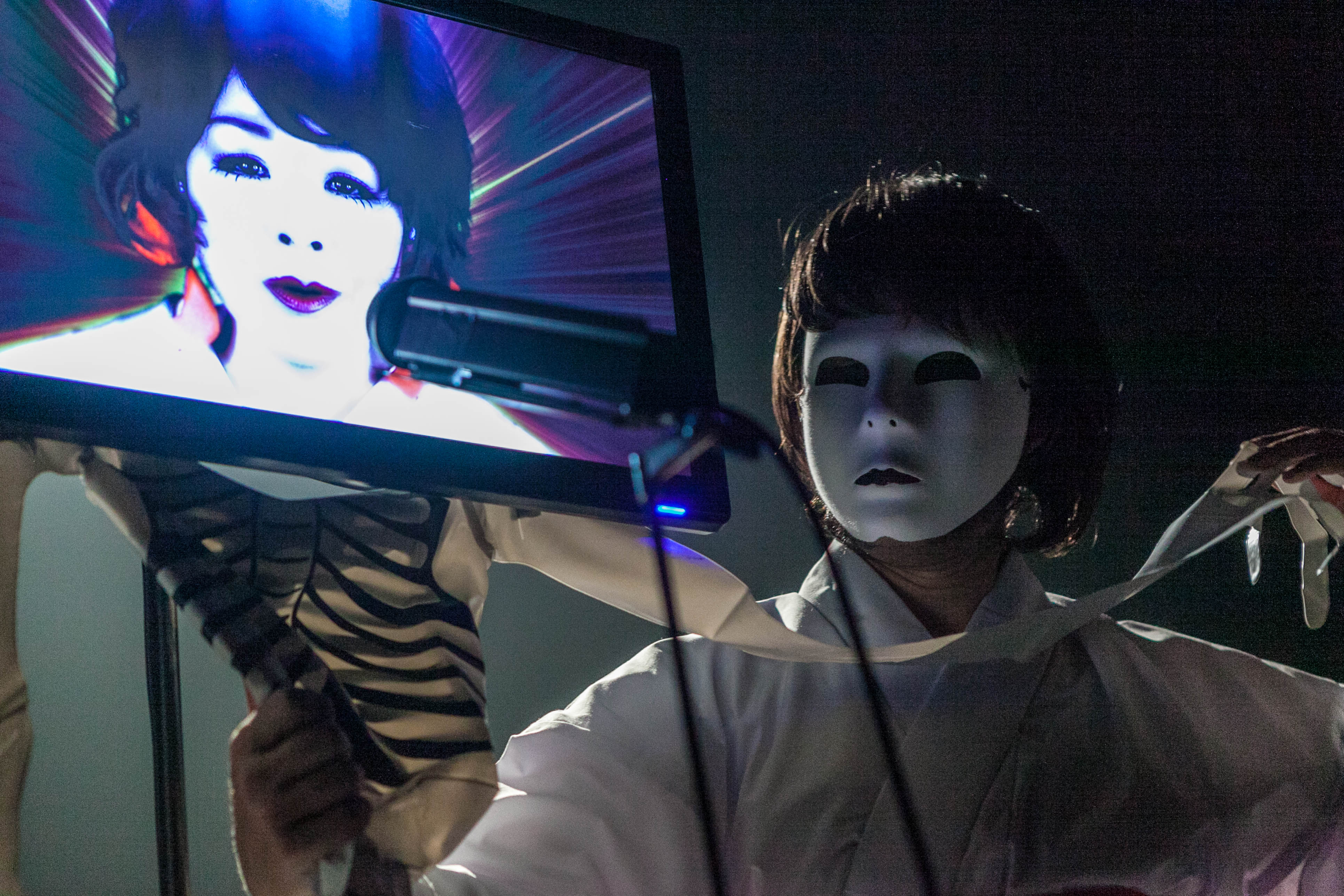 My Journey from Japanese Traditional Folk Music to 8-bit Technofolk

I stumbled upon Japanese traditional folk music the same way a horror film heroine might trip into a dark, deep pit in an old, creepy mansion: by accident.

And much like said heroine who suddenly wakes up in said mysterious, deep pit, I don’t even know how I got here. The last thing I remember was wondering about Japanese instruments and typing “Japanese traditional songs” into a YouTube search bar, before being sucked in by the strums of shamisens and the dynamic vocals of Japan’s traditional folk singers.

Although it’s usually put under the umbrella term “min’yo,” there is no exact name for the genre Japanese traditional folk music belongs to. Sometimes they’re called inaka bushi (country melodies), other times they’re called inaka buri (country tunes), or even hinata uta (rural songs). However, I think min’yo, whose kanji roughly translates to “the people’s chant,” is a weirdly accurate description of these simple, yet intriguing songs. For simplicity’s sake, I’m going to be referring to them as min’yo from here on out.

In the same way certain foods or adorable mascots are part of a prefecture’s identity, min’yo songs are another way for many regions in Japan to further distinguish themselves. Originally sung by the lower class, their purposes vary from work songs sung while toiling away in fields, to sacred religious chants performed during ceremonies. Many songs tend to have imagery of nature or details of everyday life, and often performances incorporate special dances or instruments.

Take for example Japan’s oldest min’yo song: “Kokiriko-bushi.” Hailing from Gokayama village in Toyama prefecture, “Kokiriko-bushi” illustrates the natural flora and fauna of the village during the harvest season. A performance of “Kokiriko-bushi” is visually intriguing as well; performers move slowly across the stage in uniquely shaped straw hats, as others play the iconic binzasara instrument: an accordion-like apparatus consisting of many wooden slats that clack together to create the “dedereko-den” chorus of the song.

I fell in love with how all these elements came together into a cohesive experience.

More compelling, though, were the powerful emotions behind each song. Each one seemed to condense the essence of feelings like sadness, happiness, or loneliness in a way that you could empathize with, despite the language barrier.

My appreciation for min’yo grew extensively throughout college, and during the long hours of nighttime studying or downtime between projects and papers, min’yo playlists kept me company. Whether it was the more New Age, emotional ballads of Ikue Asazaki, or lo-fi recordings of televised performances from the 90s, I listened to it all. I wasn’t too picky, and even if I didn’t always understand the words, I let myself get swept away by the vibrant energy each song and performer exuded.

Unfortunately, my college roommate and study buddies didn’t quite share the same enthusiasm for min’yo, and I don’t blame them. I completely understand that min’yo isn’t exactly easy listening for a lot of people. It can be a bit grating at times, with tunes that don’t follow traditional Western note progressions, not to mention the sometimes startling kakegoe (call-and-response) that seemingly jump out of nowhere.

Older Japanese folks didn’t understand why I enjoyed the genre so much, either; even they found min’yo to be a relic of the past that didn’t quite have the chops to withstand the more international appeal of modern-day songs. For a lot of people, min’yo was something that only a few Japanese people sang, and even then only to demonstrate Japan’s nostalgic, rustic charm. I found myself having to agree with them. It seemed that min’yo was reserved for special occasions, like cultural events or TV specials, and so many recordings I enjoyed were decades old. Perfect preservation of the genre seemed to be the goal, and innovation was limited, if present at all.

And then I discovered Omodaka.

I was looking for more min’yo to listen to on the Internet (as per usual), and during a mindless return to YouTube’s homepage, I noticed a distinctive thumbnail. A stark white, minimalist graphic of an arrowhead flower emblazoned on a punchy, vibrant red background; that’s all there was to it. The title was equally as simple: “Hietsuki Bushi,” uploaded by Omodaka. At the time, I had no idea what any of those words meant, but I was riding high on my min’yo video binge, so naturally, I clicked.

Imagine my surprise when, instead of hearing the bare twangs of shamisen like I was expecting, I was hit with a lush, multi-layered 8-bit melody mingling with a classical guitar’s gentle strums. Before I could fully process what I was hearing, a loud, piercing, siren-like horn cut through the mix, and jarring though it was, I only became even more entranced by whatever the hell YouTube just recommended me.

Then the vocals kicked in.

To hear the powerful voice of a trained traditional folk singer sing a tragic love story from the Kamakura era is absolutely breathtaking even under normal circumstances, but it was even more so amid the blips and thrums of the 8-bit chords and guitar plucks weaving throughout. The singer’s notes swooped up and down with confidence, working alongside the digital landscape of the background music. I’d never listened to such a wonderful marriage between traditional and modern musical aesthetics before, and as soon as the video finished, I was already eager for the next song.

As it turns out, those skilled vocals belonged to classically trained folk singer, Akiko Kanazawa (whose min’yo rendition of the Beatles’ “Yellow Submarine” is definitely worth checking out). But listening to her other works, it was clear that someone else had had a hand in Omodaka’s skillful mixing of chiptunes and traditional folk standards. After a few music videos and a deep-dive internet investigation, I soon discovered that Omodaka was not just a one-off, eclectic min’yo mashup, but an expansive collaborative project that combines traditional Japanese music with contemporary visual artists. And behind all of it is one man—electronic music producer and DJ, Soichi Terada.

Terada, the founder of house-electronic music label Far East Recording, has enjoyed listening to min’yo music since childhood, but felt he “couldn’t say that [he enjoyed min’yo]” to his friends because they weren’t interested in it. He experimented with min’yo/house fusions, and over time, Terada developed a distinct sound that would define his label. Later on, spurred by a desire to collaborate with visual artist friends, Terada launched the Omodaka project in 2001.

Pieces by the Omodaka project usually involve Terada’s friends creating fantastical, even psychedelic, animated music videos for his “techno folk” songs (a term Terada has coined to describe this niche genre). My personal favorites are “Yosowya-san,” with its side-scrolling 8-bit exploration of Japan’s gambling culture, and, of course, “Hietsuki Bushi,” an adventure about a love confession thwarted by portal jumping spacemen, a farmer/lion/bird chimera, and oh— aliens. There are also several albums released under the Omodaka name, each filled with songs which need no music videos to be enjoyed.

Where Omodaka really shines, however, is during live performances. They are an unabashed bonanza of pure theatricality, complete with large screens displaying Kanazawa in various costumes as she sings to the audience virtually, and props like paper lanterns and bamboo flutes. Especially striking is Terada’s costume and stage presence.

Donning a white plastic mask, a shaggy black wig, and miko (Japanese shrine maiden) religious robes, Terada transforms into a
strange, barely human, androgynous entity whose only goal seems to be to get the blood pumping to some good ol’ technofolk.

Best of all, when you look into the audience during an Omodaka show, it doesn’t solely consist of geriatric Japanese; the crowd is diverse and, importantly, it’s young. I’m certainly no expert in methods of preserving intangible cultural heritage like min’yo, but I think that Terada is taking a step in the right direction to make sure min’yo will stick around for a bit longer.

Sure, some purists may condemn Terada’s genre mixing as sacrilegious to everything traditional folk music stands for. However, when I see the audiences during Omodaka’s performances sway their bodies to Kanazawa’s trilling and yell back kakegoe to Terada, I feel that wonderful energy that drew me into min’yo in the first place. All I hope is that some of these people will also go back and listen to the music that led to the Omodaka project in the first place, and appreciate the unique sound of min’yo, too.

If you would like to check out the Omodaka project or Terada’s other works (he’s composed music for video games as well!), then I highly recommend looking at his label’s YouTube channel: “fareastrecording” (all lower case, no space). If you search “Omodaka – Topic” in the search bar, YouTube even has a curated playlist with Omodaka’s entire oeuvre! You can also listen on spotify. Furthermore, Terada regularly updates a Twitter account which announces future performances and other exciting news, like the October 28th release of Omodaka’s newest album in five years!

Erica Park is currently working as an ALT in Kyotanabe City, Kyoto Prefecture. Her main interests are Japanese traditional culture, going to art museums, and overanalyzing media (preferably over a tumbler of Laphroaig 12). When she’s not doodling or daydreaming about finally getting tickets to a Takarazuka performance, she’s planning a trip to yet another prefecture in Japan.