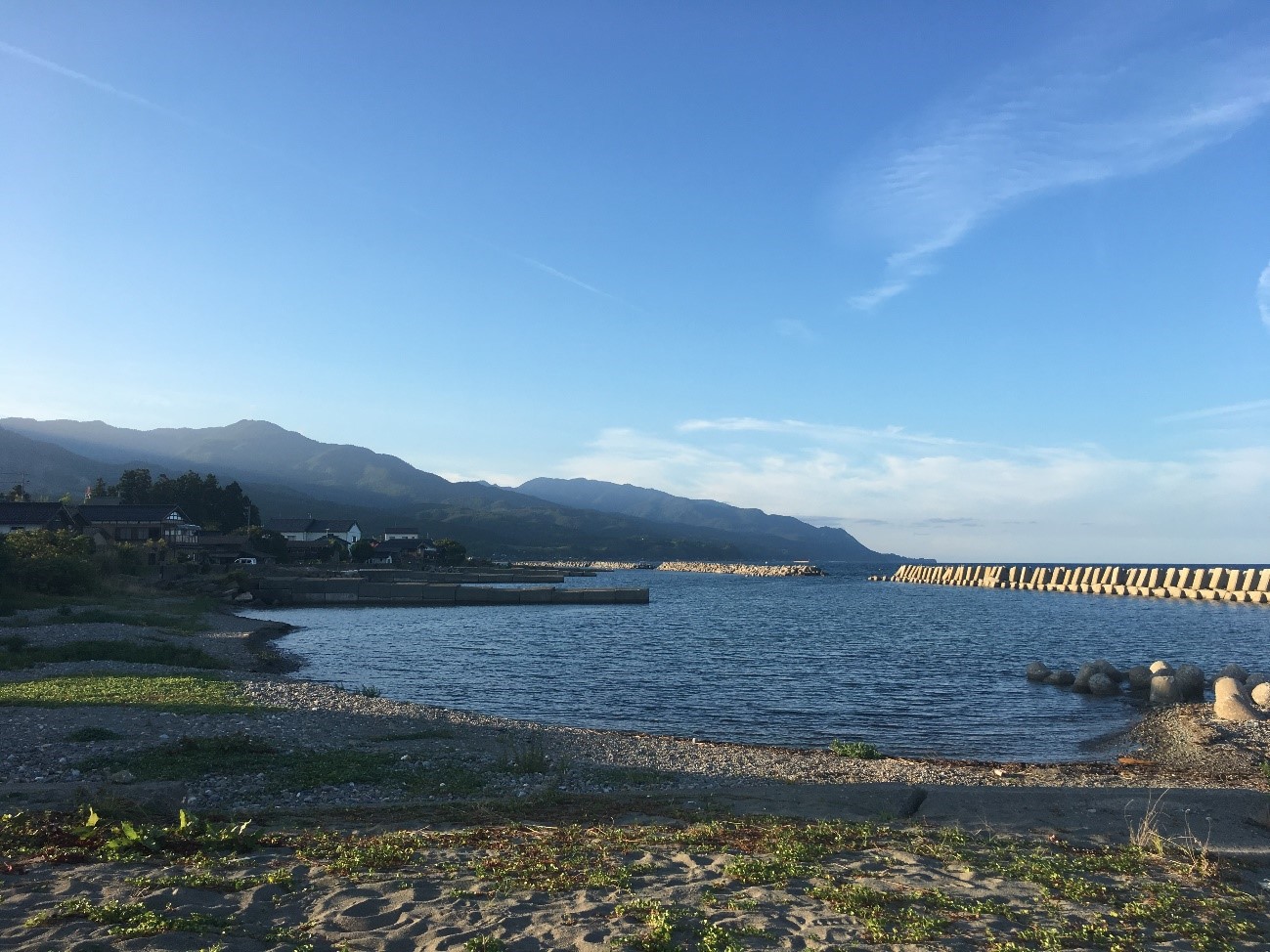 We all know that Japan is an island nation. There’s Kyushu and Honshu, Hokkaido and Shikoku; Okinawa is almost entirely islands. But there’s an island no one knows, and it’s where I’ve been living since August of 2018.

While many of you have heard of Niigata prefecture (perhaps some readers even live here), very few people know Sado Island. A two-hour ferry ride off the coast of Niigata City, this small island is home to some 55,000 people who are happy to see tourists of any kind. Once a bustling series of townships funding the Tokugawa shogunate with its gold mine, this island’s ore veins are now all dried up. No longer economically prosperous, residents focus on what has always made Sado truly rich: connections with nature. Sado’s landscapes and wildlife are second to none, and I’d love to show you just what this tiny but mighty island has to offer to those who love exploring Japan’s diverse environments.

Have you seen the adorable mascot for Niigata Prefecture? The Japanese crested ibis, or toki, is fundamental to living in Niigata. While the whole prefecture makes use of this avian hero on merchandise and public signage, the birds themselves thrive on Sado.

Historically, the population died out in 2003, the last true toki dying out in captivity on Sado Island. Since then China has gifted similar ibis to the island, where they are bred in captivity and reintroduced into the wild through a successful breeding program. These days, toki can be spotted flying overhead in the early morning and late afternoon, or hiding in one of many rice paddies dotting rural roadways. There are about 350 known toki that live in the wild here and only 1 that has flown over to the mainland. I myself have only seen them a handful of times, but some of my students who live closer to their sanctuary see toki every day.

This sanctuary is called トキの森公園 (toki no mori kouen) and is a prime tourist destination on the island. This center is the main hub of the island’s toki breeding program, where they’re born and raised before being released into the wild. Rocks are hand-painted with tokis by children, their art dotting the pathways leading up to the humane bird enclosures. When I visited I couldn’t help but take in the sights and feel hopeful for the toki’s future. Past environmental ignorance may have led to this beautiful bird’s extinction at one time, but today the people of Sado carry this legacy and act in defiance of it. They care for them above all other local animals and hand this belief down to children at a young age. I am reminded of this not only at toki no mori kouen, but whenever I see the toki’s wingspan flying overhead at sunset.

I have been told, “Everyone is an amateur photographer here. How can you not be? Sado is so beautiful!” Being entirely surrounded by nature is a breathtaking feeling, one that’s overcome me time and again during my life here. The dichotomy between urbanity and wilderness is apparent anywhere you look, with Mt. Kinpuku looming silently over the urban density clustered at its base. Rice paddies are carefully stepped along the coast, volcanic rock outcroppings stretching up and out of the ocean along coastal roadways.

Despite the evidence of human life, there are plenty of places I go to get away from Sado’s urban life, as most of the island is incredibly rural. There are hiking trails that lead up to The Curry River, a stream named after the color of its natural mineral concentration. The Senjusugi Route is a hiking trail that leads through a primeval cedar forest. I could go on, or you could go to the Sado tourism website. With forests and fields, mountains and beaches, Sado’s people have learned to adapt to the elements in a variety of ways.

Designed with such variable ecosystems in mind, the taraibune is a widely recognized Sado symbol. Legends say that a Sado woman once had a lover on the mainland and she would steer her taraibune over the channel to see him in secret; they both tragically drowned, but the taraibune lives on. Composed of a wooden tub and single hand-turned paddle, this boat takes practice to steer – I should know, I’ve tried! They are used for fishing in between the narrow volcanic rock formations and coves along Sado’s southern shores, showing an ability to adapt to nature, not master it. Shukunegi, one of the southernmost towns, has taraibune you can ride whenever the weather is nice, and if you’re nice they’ll let you try to steer it yourself!

Sado is also home to countless shrines and temples – believe me, I’ve lost count of how many temples I’ve seen while I’ve been here. Frankly, I love turning a corner and stumbling across a neighborhood shrine, or driving through winding mountain roads to find some tiny moss-covered shrine overlooking the sea. This island is where the Nichiren Buddhism sect was founded, so people from across Southeast Asia often travel here on spiritual pilgrimages. Though there are many places to pray, a few are very well known across the island and beyond.

Choukoku-ji has several Japanese cedar trees that are hundreds of years old, one Buddhist monk, and seemingly infinite rabbits. Younger bunnies are kept in protective pens while older ones run around the grounds, hopping and playing and munching on vegetable scraps. You can feed them yourself if you bring vegetables, but the monk is also happy to supply them to anyone who looks excited to be there. Every time I have visited now, within five minutes the monk comes up to me, whips a tiny bunny out of his robe sleeve, and plops it down in my hands. You can pet and hold the baby bunnies for as long as you’d like, but children are also eager for a turn! Choukoku-ji recently got national (and Reddit) attention by installing a large white rabbit statue with a Buddha peeking out of its chest; at night its eyes glow a bright, ominous red. Locals and Japanese people seem to find it interesting, while the other ALTs and myself laugh at how genuinely odd it is. Either way, it’s certainly an attraction.

The other popular temple on Sado is Seisui-ji. Founded in 808, a monk from Kyoto came to Sado for missionary work and built the temple in the Kyoto style of the time. Legend says that he felt bad for those who lived on Sado and who couldn’t easily pilgrimage to Kyoto, so he modeled the temple closely after Kiyomizu-dera. For example, there is a hall imitating Kiyomizu-dera’s wooden stage, and a 1,000-armed Kannon Bosatsu. This smaller Sado version of a Kyoto temple is unique in its origin and tranquility, offering people the beauty of a Kyoto temple without the crowds of tourists.

You can see all of this year-round, but in late summer there is a big event that pulls people from all over the country (and even abroad) to this remote island. When I arrived on Sado in August, the first major activity I took part in was Earth Celebration. This event is held in Ogi, a township on the southern end of Sado Island. At this event, vendors and food stalls from all over come to showcase their wares, which often have a natural or international focus – I personally recommend the Korean food stall! If you’re interested in celebrating the earth and its many cultures, Earth Celebration is a unique experience where locals collaborate with outside groups, where Sado sazae (turbine-shell sea snails) are grilled next to gelato carts. It’s fun to get lost in seeing so many people enjoy Sado life, even if the crowds only last for a short time. Next to these festival paths is a stage area where various groups perform throughout the day.

The biggest performer by far is Kodo, a popular taiko group from Sado Island. They are internationally famous for their epic performances involving costumes, fan dances, flautists, and of course, taiko drums. This group embodies Sado’s devotion to the natural world through its training program. New recruits spend two years in a remote lodge located in the nicknamed Kodo Village, where they study taiko, grow and cook their own food, master an instrument, and unplug from the modern world (learn more here). These principles shine through in their stage show, the performers’ fine-tuned artistry exploding into a fantastic, immersive experience. They don’t allow photography or recording devices during the performance, so prepare yourself!

When I was told I’d be moving to Sado, I was excited but nervous. Used to the excitement and activities widely available in a big city, I was surprised at how quickly I took to country life. Even so, if a day feels a bit too slow it’s easy to drive out and see something new, be it a random shrine or pagoda, a view of the ocean through a forest, or a toki flying low over a rice paddy. Nature thrives here, finding new ways to surprise me all the time. Sado’s connections to the natural word are made possible by the relatively small population of locals and ever-growing crowds of visitors, people who are inspired by this island’s strength and perseverance. This is the island no one knows, and that’s why it’s so beautiful.

Rachel Geshay grew up in Jacksonville, Florida, then moved to Niigata Prefecture with the JET Program in August 2018. She graduated from the University of Florida with dual degrees in Environmental Science and International Studies (Asia) and a minor in International Development and Humanitarian Assistance. Her hobbies include attempts at amateur iPhone photography, rewatching her favorite TV shows, writing, and trying seasonal konbini sweets. All she wants in life is to eat tasty food, make the world a little more sustainable, and make people smile.