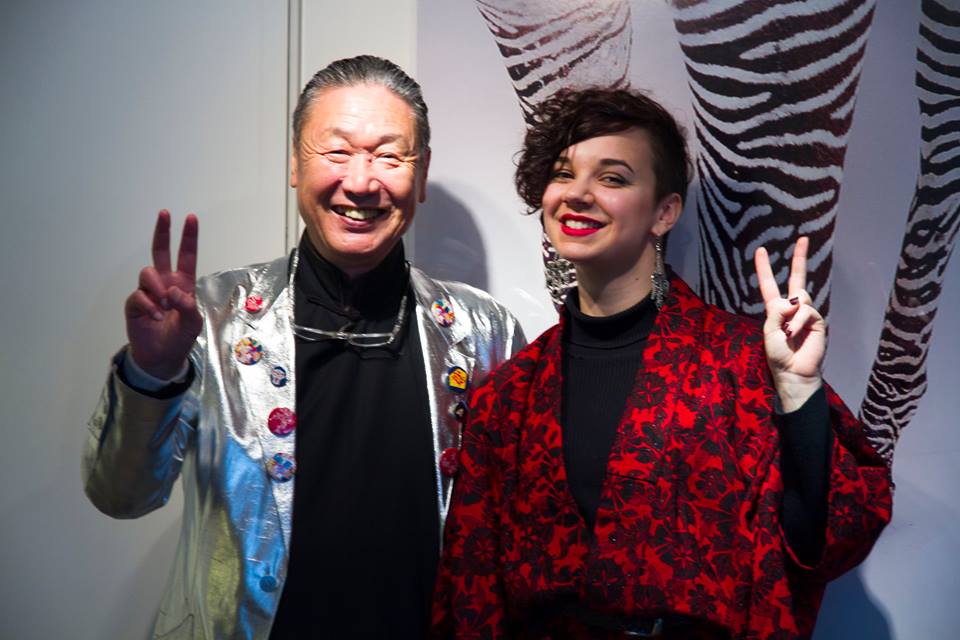 Laura Pollacco. This article originally featured in the February 2019 issue of CONNECT.

Kansai Yamamoto is a force of energy. For those who don’t recognise the name, you will certainly have come across his work. He rose to international fame after designing many of David Bowie’s spectacular stage costumes. His colourful and rebellious designs have constantly created a buzz, appealing to many music and fashion icons such as Lady Gaga, Elton John, Stevie Wonder and, of course, David Bowie. His ongoing enthusiasm and creativity have kept him going onward and upward, to question and create. Even now, at the age of 74, he shows no signs of slowing down. 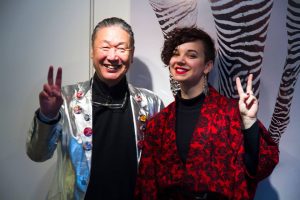 This is not my first time meeting Kansai; I was lucky enough to meet him in 2015 for a similar interview. He certainly made an impression then, in a silver blazer and multi-coloured cowboy boots, and today is no different. Dressed in army camo pants and a colourful Princeton Uni hoodie, he looks as far from the typical salaryman image as possible. Looking like he would be snapped for a street style pic in central Tokyo, he represents the energetic, zany side of Japan. Luckily he remembers me from before, and after the usual pleasantries, we sit down to discuss the remarkable life he leads.

Kansai originally studied to be a civil engineer at high school before realising that he wasn’t quite cut out for it. “I knew I was bad at math. But train design is all about calculation, you know, and I was absolutely hopeless with it. We didn’t use calculators.” After graduating he was tasked with building a dam in the mountains. “But I had no idea what to do, I was young and I wanted to do something more exciting.” For him, that ‘something’ was fashion design, and in 1967 his designs won the Soen Magazine Prize, associated with the esteemed Bunka Fashion Institute. Other recipients of the prize have been notable designers Yohji Yamamoto and Kenzo Takada.

Before receiving this award, his life had not been easy. “I was earning 10,000 yen a month, and after rent what’s left was about 6,000 yen. And you divide that 6,000 yen by 30 days, which gives you 200 yen per day. To eat three meals a day, 200 yen gets you about 70 yen each… that was the kind of life I was living. And at the third year I won that award. So some people say that, Mr. Kansai you are a rich man and don’t seem like someone who has to work hard, but the truth is I was very poor, and in order to make a future for myself I gave everything I had at the time to win that award.”

After the Soen Prize, Kansai’s career in design really took off. In 1971, not only did he open his own company, Yamamoto Kansai Company, Ltd., but he became the first Japanese designer to showcase his designs at London Fashion Week. His designs wowed Western audiences with their colour and vibrancy, but it wasn’t just his designs. Kansai himself became a man of great interest and was featured by many major fashion and lifestyle magazines such as LIFE Magazine and Vogue UK, who called him ‘Amazing Mr. Kansai Yamamoto.’ Perhaps it was his distinctiveness as the first Japanese designer showcasing in the UK, but more than that it was his energy, his avant-garde way of thinking, that attracted people to him.

I ask him about his time spent living in London; just as we have faced our own difficulties and culture shock here, what was it like for him? Along with being stared at in the street by people (haven’t many of us felt that here in Japan?), he recounts a specific culture shock of his own.  “I rented a flat in the UK. And the way you take baths is different between Japan and UK. In the UK, you are not supposed to get water on the outside of the bathtub, and you finish everything on the inside, like soap and bubbles. But in Japan, you can get out of the bath, pour water on you… it’s completely different.” I recall from our last meeting that he told me he had a girlfriend back in the UK. “Yes, I remember that British girl. Well, she suggested we go to bathe together, and as I’ve said before it was all dirty, and she went into the dirty bath first, and I went in later. In Japan there is no such custom. Men always go into the clean (bath water), and we don’t really bathe with dirty bath water. So that’s something I remember very vividly.” He is not one to shy away from such personal stories.

The acclaim that had come from his debut in London would lead to a fateful meeting in New York in 1973. At this time, David Bowie was a rising star. He had brought to life his persona of Ziggy Stardust and was intent on reaching out to the world. Kansai received a call from Bowie’s producer telling him to come straight out to New York to have a meeting. The first time Kansai saw David Bowie, Bowie was descending from a glitter ball onto the stage at Radio Music City Hall. Kansai, with all his energy and love of the theatrical, felt a connection with this alien man in front of him.

I ask him if he knew, at that time, just how big David Bowie and his own designs were going to become. “I couldn’t have imagined that he would become such an international star afterward, and given that time period, I didn’t understand if he was male or female, but it didn’t matter, our purpose was the same. He wanted to expand his business from the UK to New York and to the world, and I wanted to expand from Japan to the world. We both had the same goal, but it was quite difficult to understand each other because there was a fundamental difference in our understandings of aesthetics. However, what I really understood at that time was that he had a very strong personality.” Kansai believes that in our lives we come to meet so many people, but we only truly connect with so few of them. For him, David Bowie was one of those people. Together, with Bowie’s musical gifts and showmanship and Kansai’s designs, they created something the world will never forget.

We both had the same goal,
but it was quite difficult to understand each other because there was a fundamental difference in our understandings of aesthetics.

During his designing, the one thing that became important to Kansai was showcasing his “Japaneseness,” his love for his country and culture. “When we (Japanese nationals) are in Japan, we don’t think about it because everyone around us is Japanese. But when we go abroad, we have to reveal who we are, we are Japanese.” He infused his designs with the culture, colour and prints, taking inspiration from ‘kabuki’ and ‘basara’ (not the manga but rather a fashion style characterized for being loud and colourful) from the Azuchi-Momoyama Period (1568-1600). He adapted the colour-changing costumes that characterise kabuki performance for his shows in London, creating less of a runway and more of an event, the likes of which the people there had never seen. There are many designers and lovers of Japanese street style that have Kansai to thank for the bold and colourful looks we have seen and still see today. 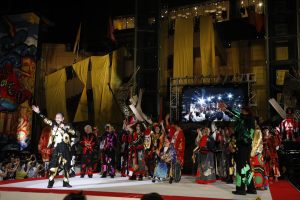 Kansai has been involved in a great many projects. His love of design spreads beyond the fashion runway. His projects have been numerous and varied, and they are often aimed at sharing Japanese culture with the world. From 2003, he was a member of a government tourism panel called Kanko Rikkoku Kondankai (Tourism Driven Nation). This panel was created to help encourage inbound tourism to Japan. As a part of this group, Kansai designed the Keisei Skyliner from Narita Airport to Ueno. His goal was to create a design not solely for tourists but for families as well. For parents who have travelled all the way to Japan with young children, the toilets are designed to have somewhere to rest the child whilst the parent freshens up. Such design features earned the completed Skyliner two design awards. He has also been working on creating many event showcases, taking his designs onto the stage to promote Japanese culture around Russia and a number of Asian countries.

I ask him how it felt to move away from fashion to these events. “I never stopped doing fashion; fashion is included in everything I do. I didn’t stop. It doesn’t matter that I quit doing runway.” Kansai fuses fashion and performance together for these events, and the colour and boldness of them is wonderful to watch. The events held here in Japan are called ‘The Japan Genki Project Super Energy!!’ Through these projects he wants to energize people’s minds and encourage an awareness of Japanese culture. The event includes traditional Japanese art forms, such as taiko drumming, shamisen performances, and even karate. He invigorates them with his bold new designs and a sprinkling of Western influence. His performances pull in audiences of around 10,000 people who come to be captivated and entertained by this celebration of music, culture, performance and fashion.

So what is Kansai working on in the near future? He will be holding another ‘Super Energy’ event in Tokyo in June and has kindly extended an invite to CONNECT Magazine to come and watch. Of course, anyone can buy tickets, and I warmly encourage those of you with an interest in the fashion and culture of Japan to attend. On top of this, Kansai will also be taking on a tremendous task this March – travelling to the North Pole. When I ask him why he would undertake such a difficult and possibly dangerous task, his answer blows me away. “Because there is no colour. Only white. That’s why I am going. I mean, there is no colour. I would like to know what would happen to my character to see only white. Can you imagine! It will be -40°C!”

Because there is no colour.
Only white.
That’s why I am going.

This thought alone shows you the true depths of Kansai’s character. He will then be 75 years old and travelling to one of the most uninhabitable places in the world  just to see how it makes him feel; he’s a man who surrounds himself with colour heading to a place where there is none. He continues to be remarkable, and I wait with anticipation to see more of what he will do in the future. Kansai Yamamoto is nowhere close to stopping.

This article would not have been possible without the help of the following Translators:

I want to give my thanks to my friends for volunteering their skills and time to help me.