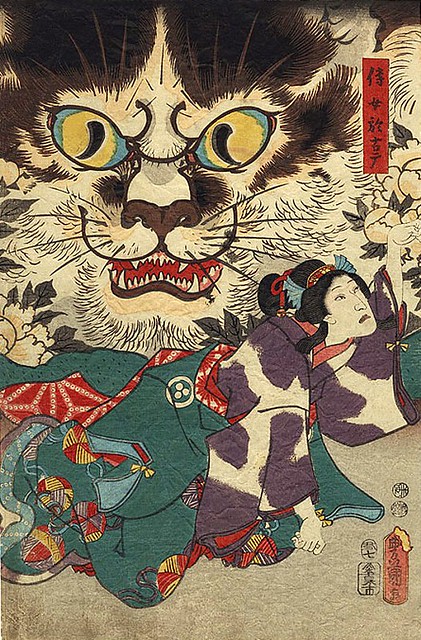 A History of the Horror Aesthetic in Japan

Most people from abroad probably got their first taste of Japanese horror from the smash-hit horror movie The Ring, or the spine-chilling manga of Junji Ito.

These works are just the tip of the iceberg. Japan has a long and vibrant history of supernatural folklore and classic horror. Although Japan’s spooky season is actually in the middle of August, when the Obon festival is held, October is the perfect time for Western audiences to dive into the history of Japan’s haunting images.

Visual depictions of supernatural beings and horrifying, bloody scenes first emerged in Japanese painted scrolls during the medieval period. During the Edo period, such pictures eventually developed into the yurei-zu: a genre of painted or woodblock print (ukiyo-e) images depicting vengeful ghosts, demon spiders, and other supernatural creatures [1].

Japanese folklore and the related yurei-zu are so packed with various supernatural creatures: yurei, yokai, bakemono, and mononoke, to name a few. To make things even more confusing, there are no clear agreed-upon definitions for what counts as a yokai or what counts as a yurei. Almost all of the great folklore researchers disagree on the exact classification of these creatures, and it ultimately boils down to personal opinion [2]. However, all Japanese art of the Edo period that depicts any type of supernatural creature can be classified as yurei-zu.

To keep things simple, let’s look at some general definitions of the ethereal creatures that inhabit Japanese folklore:

Yurei are the spirits of the deceased, similar to ghosts in Western folklore. According to Shinto and Japanese Buddhism, all humans have a soul called the reikon. When a person dies, their reikon leaves their body and enters a form of purgatory until they receive proper funeral rights. Once the burial ceremony is held, the reikon will rejoin the individual’s ancestors in the afterlife and only return to the living world every August for the Obon festival [3].

However, a reikon can become corrupted. When a person dies in an unexpected, violent, or traumatic way, or the individual is consumed by powerful emotions such as a desire for revenge, their reikon remains amongst the living as a yurei, who cannot rest until it completes its unfinished duty amongst the living.

Yokai can basically be described as earthly creatures, like goblins or other mythic demons. They are not always malevolent, but simply supernatural beings that can sometimes even bring good luck.

“Yokai can either be legendary figures from Japanese folklore, or purely fictional creations with little or no history. There are many yokai that come from outside Japan, including strange creatures and phenomena from outer space. Anything that can not readily be understood or explained, anything mysterious and unconfirmed, can be a yokai.”

-Shigeru Mizuki, Secrets of the YokaiーTypes of Yokai

A bakemono is a type of shapeshifting monster that is still alive. The idea stems from the Shinto belief that all things in nature possess a soul, so bakemono can take the form of other animals and plants. While many yokai can also shapeshift, Japanese mythology draws a line between a type of animal that actually exists in the physical world, and can shapeshift, and a supernatural creature that can [4]. For example, nine-tailed kitsune foxes which can transform into people would be considered a yokai because nine-tailed foxes do not exist on the earth as we know it. However, bakenekoーintelligent shapeshifting cats that can transform into peopleーare classified as bakemono because house cats are otherwise ordinary creatures.

Fears of the Edo Period

The popularity of the yurei-zu and other graphic pictures, such as the chimidoro-e (“bloody pictures”) during the Edo period was likely because the savagery of society during the age of the samurai was not such a distant memory [1]. The literature of the era, such as the Ugetsu Monogatari was similarly dark and grotesque. While the period was generally a time of prosperity and peace, stability must have seemed fragile due to rapid change, government oppression, and several natural disasters. The yurei-zu were a form of catharsis for the people of the Edo period to make light of their fears.

The yurei-zu were also a humorous means of subverting censorship during the Tempo Reforms of the Tokugawa regime [5]. Artists would often substitute mythical creatures and demons for the political or elite figures they wanted to depict in scathing social satire that was not lost on anyone.

Perhaps the instability of a pandemic society and the political uncertainty currently being experienced in many countries is why contemporary Japanese horror manga, such as the work of Junji Ito, is so fascinating to many people today. The artwork of many manga artists who deal with the supernaturalーsuch as Shigeru Mizuki and Shibashi Hiroshiーis undeniably influenced by the yurei-zu.

Matsui Fuyuko, and artist couple Maruki Iri and Maruki Toshi, are other contemporary visual artists who use the influence of yurei-zu to comment on their experiences of today’s society. You can view the Marukis’ “Hiroshima Panels,” which include a depiction of the ghosts of the victims of the atomic bombing in Hiroshima here. Fuyoko Matsui’s works, such as “Keeping up the Pureness,” incorporate the haunting elements of yurei-zu to explore themes of trauma and repression, and can be viewed here. If you can still stomach more horror, I would suggest checking out their work!

Jessica is a fifth-year American JET living in Saitama. On weekends she enjoys hiking in remote areas of Saitama or taking day-trips to Tokyo. When not adventuring, she can be found reading or creating her own artwork, which can be seen on her Instagram @jessica_craven_art.

email
Arts, From the MagazineArts & Culture