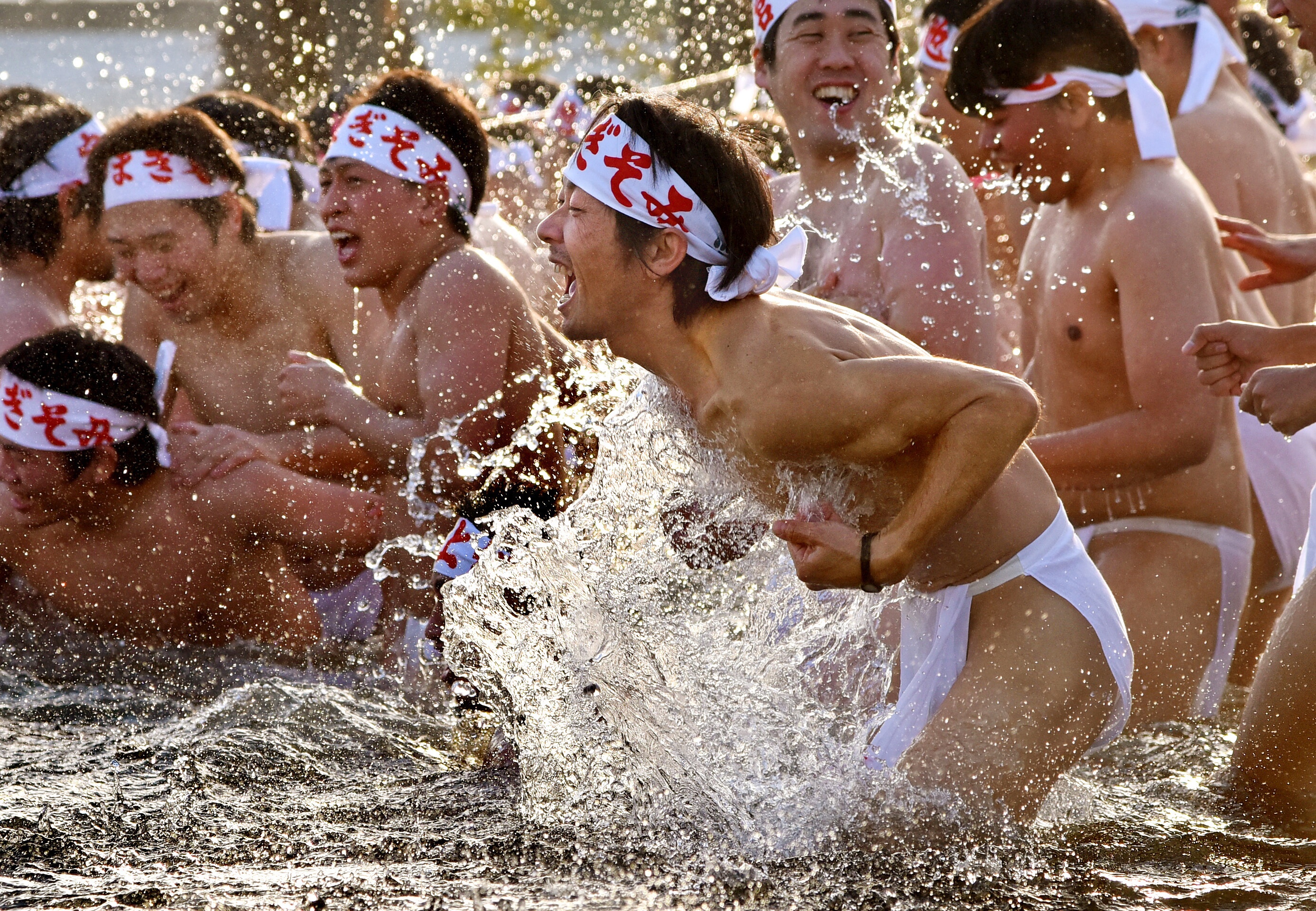 It is the middle of winter in Gifu City. The morning dawned cold and misty, the sky clearing as the sun rose. Now, at noon, the temperature hovers somewhere between 5°C and 10°C, cold enough to ensure anyone stepping foot outside does not do so without a thick winter coat.

Everyone, that is, apart from the procession of about 100 men heading down the hill toward the banks of the Nagara River, led by several kannusha—Shinto priests. Despite the chilling bite of the air, this group of men, who range in age from young to old, are clad in absolutely nothing save a fudonshi knotted about their hips.

Some of the older men seem unperturbed by the cold, while several of the younger boys shiver and chatter excitedly, their bare feet slapping the ground as they traipse down the slope. When they reach the river’s shore they will dive into the freezing water, submerging their whole bodies in a purification ritual known as misogi or misogi-harae. 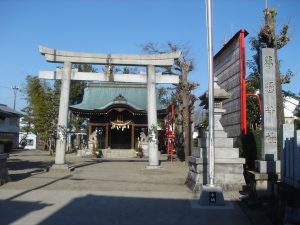 The Ikenoue Misogi Matsuri, also known as the Purification Ceremony Festival of Katsuragake Shrine, is an annual event that takes place on the second Saturday of December in Gifu City. Participants, all male, gather to cleanse themselves in the Nagara River and pray for good health, good fortune, and the safety of their families.

Misogi originates from the Kojiki myth of the god Izanagi, who, upon returning from his journey to Yomi-no-kuni (the Underworld) in an attempt to retrieve his dead wife Izanami, rid himself of its pollution by bathing in the sea. It plays a significant part in countless Shinto purification rituals, influencing not only misogi-harae, but also shubatsu—where people “sprinkle salt over themselves after attending a funeral, sprinkle water at their gate of their homes morning and evening, and place small piles of salt at the entrance to restaurants” (1)—and the more commonly recognised temizu, where those visiting shrines will rinse their hands and mouth at the purified water basin at the entrance to the main sanctuary.

Gifu’s Ikenoue Misogi Matsuri is said to have originated some 600 years ago in the Oei Era (July 1394-April 1428), during a great famine in the years 1420-1421 (2). According to a paper published by Yamagata University’s Institute of Arts and Sciences, group misogi-harae rituals would be again employed during times of struggle and suffering, such as during the aftermath of the devastating floods in 1534 (Tenbun Era), 1611 (Keicho Era), and 1636 (Kan’ei Era). It has also been reported that during the Kansei Era (1789-1801), from the dusk of October 11th to the dawn of the 12th, 25 households of shrine parishioners performed misogi-harae three times in order to ward off misfortune and pray for abundant harvests (3, pg. 156). 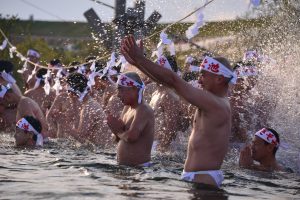 During the Taisho Era, the misogi festival was known under different names including “Festival for Warding Off Evil,” and “Festival for Welcoming the Gods.” Amusingly, it is also known as “Soba Noodle-Cutting Festival”—because after fields were harmed by flood damage, buckwheat was widely cultivated due to its short maturity period, even when planted late in the season. The noodles were then sold at stalls in front of the Katsuragake Shrine (3, pg. 156).

While the festival was abandoned during the Meiji Restoration Period in 1872, it was revived two years later following occurrences such as a disastrous fire that destroyed seven buildings, an epidemic, and the sacred wisteria tree within the shrine grounds failing to bloom (3, pg 156). A tradition through which participants pray for prosperity, good health, and protection against disaster and famine, the fact the Ikenoue Misogi Matsuri has been preserved for at least 600 years speaks volumes about the resilience of Ikenoue’s residents in the face of constant hardship.

The opening ceremony of the Ikenoue Misogi Matsuri commences in mid-afternoon at 1:30 p.m. at the Katsuragake Shrine, where participants receive special prayers called kito from a priest to remove sin and pollution, and a shrine maiden performs a kagura dance. From there, the participants are swept up in a steady march down to the riverbank, downstream of the Chusetsu Bridge. The area they will enter the water and perform misogi-harae is marked off with special ropes; the priest leading the procession will wave his onusa—a wooden wand decorated with many zig-zagging paper streamers (called shide)—left and right during the ensuing purification ritual, which you can see here. Later, at midnight, there will be another ceremony called Kami-mukae-sai for welcoming the gods to the land.

Gifu is not the only place in Japan to have its own misogi festival. Numazu, in Shizuoka Prefecture, holds a misogi festival in January at the Kohama Coast in Ushibuseyama Park. The Kanchu Misogi festival in Kikonai, southwestern Hokkaido, is known for being especially intense, and even life-threatening. In an article by The Japan Times, vice-chairman Hideo Nigata of Nippon Matsuri Network, a nonprofit organisation dedicated to protecting Japanese rural heritage, is quoted as saying, “These men have icicles growing out of their noses as their bodies literally freeze in the icy water. Their mothers are crying as they watch their sons endure the ritual.” (4) 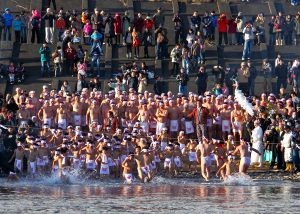 The Ikenoue Misogi Matsuri, while requiring a certain level of fortitude, is not harsh to this extent—indeed, videos of the event are more likely to show the young boys dashing into the river water with huge grins. Gifu’s festival also has a notably large number of participants (up to 100), and it is in fact possible for any man from the general public to participate by signing up at Katsuragake Shrine’s assembly hall from 8:00 a.m. onwards on the day of the event, for a fee of ¥3,000. However, the majority of participants tend to be followers of the local Shinto shrines, so many who are interested will instead simply spectate.

Perhaps it is the power misogi has to affect people from all walks of life and provide hope, peace, and fulfillment that will see it persist as a treasured purification ritual, in both festivals and smaller gatherings, even as the world changes and marches onward. The Ikenoue Misogi Matsuri was born centuries ago, and ideally, it will remain for many, many more years to come.

The 2019 Ikenoue Misogi Matsuri will be held on the December 14th (Saturday) at the Katsuragake Shrine, commencing at 1:30 p.m. For further inquiries, such as how to participate, the Gifu Tourism and Convention Association can be reached on this webpage or at toiawase@gifucvb.or.jp.

Natalie Andrews is a first-year JET and a General Section Editor of CONNECT, living in Tokyo. She spends a lot of her downtime at work either thinking about what’s for dinner or voraciously reading fantasy books on her Kindle. She is currently struggling with an unrequited love for her dog back in Australia, who steadfastly ignores her whenever she FaceTime calls her family. Is this what they call resentment?

Image provided courtesy of the Gifu Tourism and Convention Association