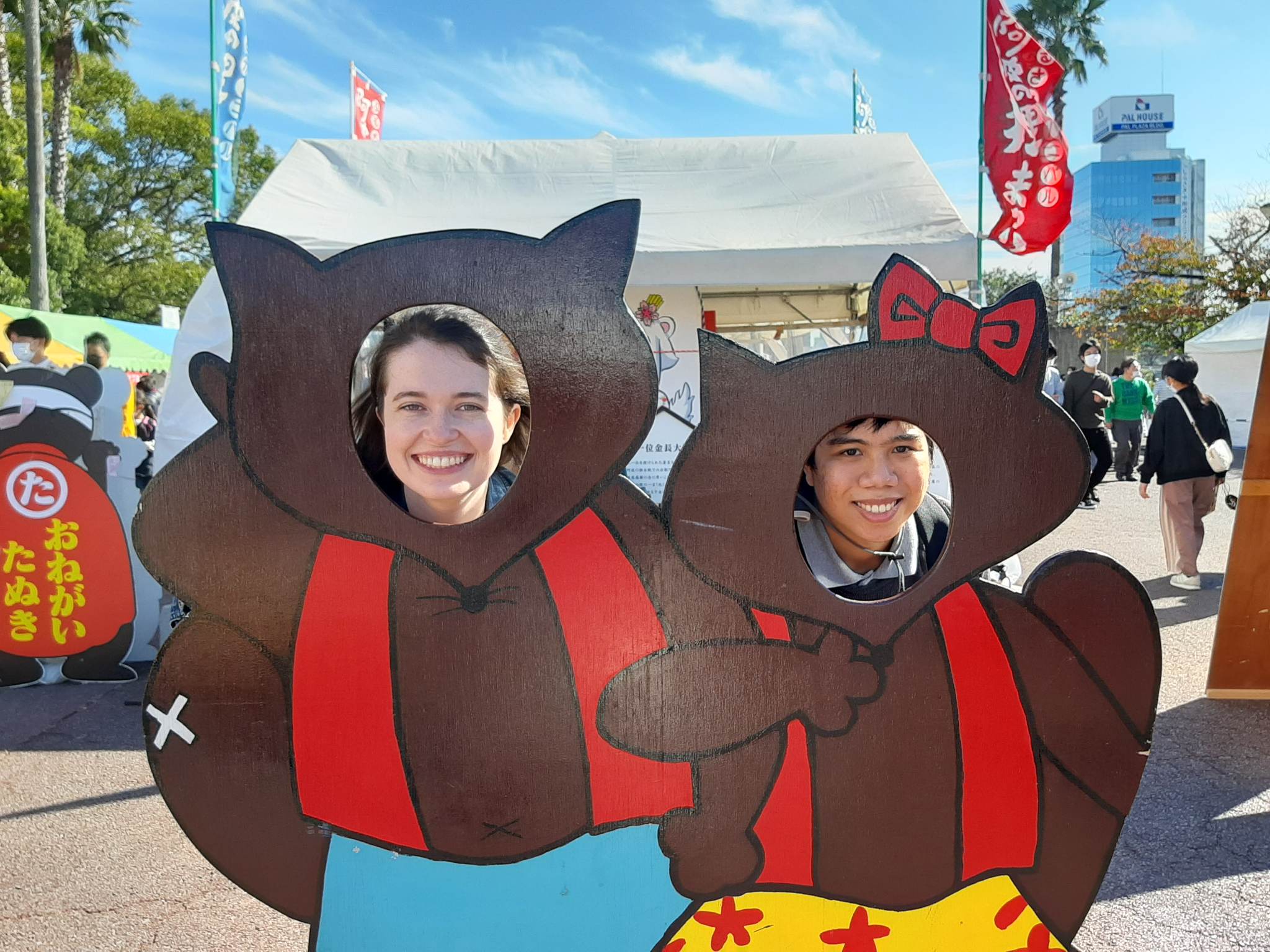 Nearly everywhere you look in Japan, there are cute characters gazing back. From banks and national ID cards to household goods and produce, there is an endless menagerie of cartoon creatures. However, there is one critter in particular that has intrigued me since my arrival on Shikoku. Furry figures with some combination of wide eyes, toothy smiles, and prominent “family jewels” can be found outside stores and temples everywhere, though I’ve also seen more family friendly caricatures on gas station banners and cautionary road signs. Finally, as they followed me into my dreams, I decided to investigate the inescapable spectres.

While these animals are certainly interesting on their own, their footprint extends beyond their natural habitat and deep into folklore and culture. 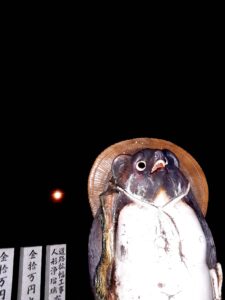 The Tanuki is a species of raccoon dog native to Japan. Although tanuki is frequently translated simply to “raccoon” in English because of their similar look, they are actually more closely related to foxes than the North American raccoon. The cute little critters are generally nocturnal, omnivorous, and about the size of a housecat. They can be found all over Japan, and the only species of their family known to hibernate. Be careful to watch out for these little scavengers, especially at night and at the edges of town. While these animals are certainly interesting on their own, their footprint extends beyond their natural habitat and deep into folklore and culture.

Shintoism and other native religions of Japan have a special kind of spirit called a yokai. It is an oversimplification to call them monsters, despite the tendency of these beings to be quite strange. Yokai are often based on nature and unexplainable phenomena that happens all around us, like the things that go bump in the night. Enter the scavenging tanuki that grew to be mythologized into something otherworldly. Sometimes known in their yokai incarnation as bake-danuki, tanuki are spirits of fertility, mischief, and fortune. The earliest written record of them dates back to the Nara period and the famous Nihonshoki (The Chronicle of Japan), and they later started to appear in setsuwa, an oral storytelling tradition, during the Heian and Kamakura periods. 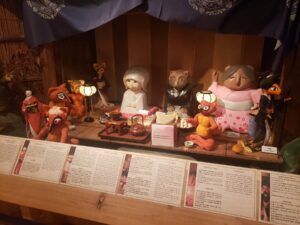 Perhaps one of the best-known legends is called the Bunbuku-chagama, or “The Lucky Teakettle.” Many different versions of this legend exist, but the key component in every telling is a tanuki’s unfortunate inability to maintain its disguise as a teakettle. One day, a junk dealer, either knowingly or unknowingly depending on the version, sells a bake-danuki that has shapeshifted into a teakettle to an unaware Buddhist monk. When the monk inevitably goes to use his new purchase, shenanigans ensue as the tanuki doesn’t particularly appreciate being roasted over a fire. In some versions of the tale, the yokai wreaks havoc on the entire temple and runs off, but in others, all the monks and the spirit come to a sort of agreement and the quirky furry teakettle with a bushy tail becomes a lucrative temple attraction. 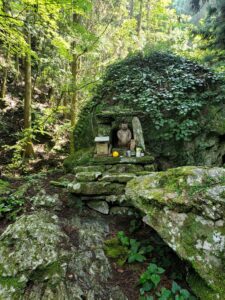 As classic tricksters, sometimes the tanuki’s pranks are just for fun. After all, what could be more entertaining than leading gullible humans astray? Other times, however, their mischief takes a much darker turn such as in the Kachi-kachi yama, or “Crackling-fire Mountain”. In this cautionary horror story, a woman is lured away by a tanuki who kills her, cooks her in a soup, and then serves that soup to her husband disguised as his recently murdered wife. Yet, instances of being led astray are not nearly so grim. A common cautionary tale tells of the dangers of drinking too much sake and stumbling home late at night. One should always try and keep their wits about them, lest they find they have been transformed into a tanuki. At least one exhibit at the Yokai House, a heritage museum in Miyoshi, has some practical advice for how to escape this terrible fate. Should you find yourself transfigured, you should immediately urinate on yourself. This will transform you back to a human before you can forget your previous life—not a tall order if you are already drunk. 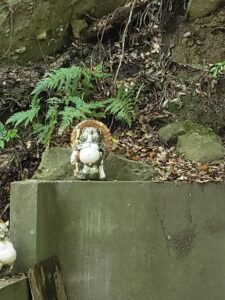 While all these stories are entertaining, there remains one important, and shall we say prominent, feature of tanuki that cannot be left unexplored. Most of the statues I’ve seen have balls. In fact, tanuki are frequently depicted with massive scrotums. Some of the oldest woodblock prints we have of tanuki feature the magical things these shapeshifters can do with their kintama, or “gold pouches.” Now, when I decided to sit down and watch Studio Ghibli’s 1994 classic Pom Poko, I was expecting some magical transformations. What I did not anticipate was a band of guerrilla fighters taking on a construction company with their nut sacks. This versatile part of the tanuki’s anatomy was even stretched to act as a type of hang glider, allowing the creatures to soar through the sky. Overall, Pom Poko is a highly entertaining film, with a message to find ways to live in harmony with nature that remains relevant today.

Not all yokai have gone so mainstream, and through my research I’ve discovered that tanuki are slowly beginning to colonize the world. Mario can don a “Tanooki Suit” in several of the Nintendo games in order to obtain special abilities such as shape shifting and (testicle-less) flight. Another popular depiction flew entirely under my radar until I moved to Japan. If you sound it out, ta-nu-ki, it might suddenly click. Tom Nook! This enterprising entrepreneur is one of the faces of the popular Animal Crossing games. While referred to as a raccoon in North American translations, Mr. Nook is a true tanuki through and through, blessed with fortune just as the legends promise .I believe that the tanuki’s rise in popularity has only just begun. Raccoon dogs were first brought to Europe in the early 20th century as pets and have since become a highly successful invasive species. I suspect that as humans continue to interact with these cute and adaptable critters of the night, the legends of the mischievous tanuki will continue to grow.

Ashley Noelck is a second-year ALT located in Tokushima prefecture. They are an outdoor enthusiast who loves kayaking and camping. Ash loves learning about culture and history, and is slowly teaching themself bass guitar. Their dream is to go on a cross-country motorcycle tour of Japan.