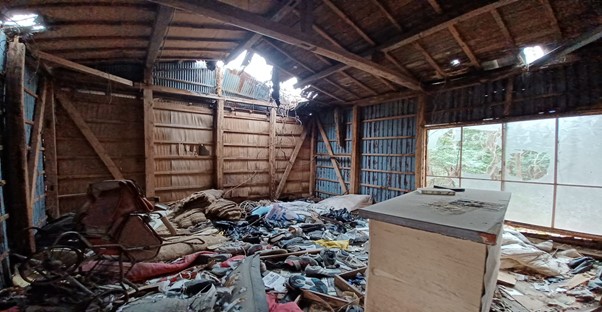 “Urbex” is short for urban exploration, the hobby of exploring derelict and abandoned locations which can be either urban or rural. Prior to coming to Japan, I had always been somewhat intrigued by such locations, due in part to an unhealthy consumption of post-apocalyptic media. However, in my part of the U.K., there are very few of these places to be found—in most cases, they are already demolished, and if they still exist, they are usually heavily secured. Think security cameras, spiked fencing, and the worst of all . . . “no trespassing” signs. So, in all my prior travels, I had never come across any place worthy enough of an urbex enthusiast’s attention, nor had I ever really tried seeking such places either.

Their interiors were in various states of ruin—some had their ceilings caved in, strangled by vegetation. One of these homes was structurally sound, though its tatami mats were rotting. Family portraits still hung from the Buddhist altar, and other personable items such as books littered the place.

Then I came to Japan, where, pre-departure, my mind was filled with all sorts of non-urbex expectations and imagery. I’m sure when everyone closes their eyes and imagines Japan, their mind fills with a plethora of preconceived pictures and ideas. For me, I pictured the most urban and populated place in the world: Tokyo and its famous sights and sounds. I imagined riding the futuristic shinkansen. I remembered the various Japanese games, films, anime, and manga that had shaped my youth. The last thing I would imagine from the bustling, futuristic, and weird world of Japan is dilapidated, decaying, and abandoned businesses, infrastructure, and homes. But in Tokushima, to my shock and the delight of urbex enthusiasts everywhere, that’s exactly what I found. 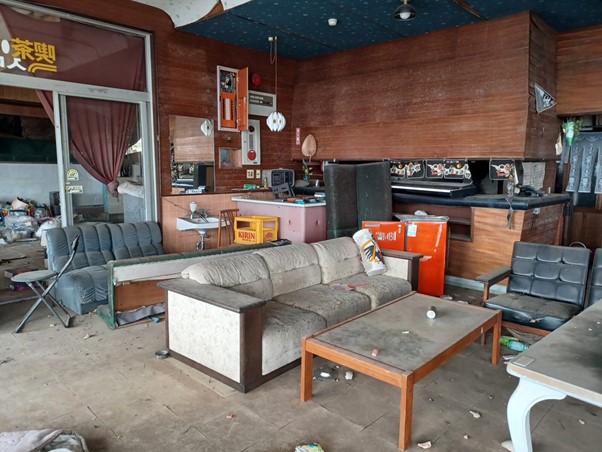 My first accidental discovery was when I visited the locally recommended Awa Sand Pillars. Somewhat unimpressed, a friend and I took a very slight detour off the beaten path. To my surprise, just a short distance away from the Pillars was an abandoned gift shop and some kind of bar. They were completely unbarred from the outside, and we were able to freely enter. When we went inside, we found both places were in very minor disrepair. They seemed recently abandoned, and there was little sign of vandalism or looting. There were still many trinkets and curios on display in the gift shop and unopened beverages in the fridges at the bar. They seemed frozen in time and apparently left to rot for no rhyme or reason that I could figure out.

The plot thickened as we made our way beyond these two structures. Just a short distance away we discovered small wooden buildings, maybe rentable cottages, judging from the beds inside. Close by to these were storage sheds of some kind, filled with random assortments of junk, most notably a large collection of shoes and, somewhat eerily, a baby pram. Curiosity not yet sated, we then ascended further into the hills, whereupon we discovered five to six houses, all completely decrepit and devoid of life. Their interiors were in various states of ruin—some had their ceilings caved in, strangled by vegetation. One of these homes was structurally sound, though its tatami mats were rotting. Family portraits still hung from the Buddhist altar, and other personable items such as books littered the place.

By chance, I would discover more abandoned homes later on while exploring my local area by bike. One house was chock-full of aged junk, but also items of tangible worth, such as manga still sealed in packaging. Other homes in this area ranged from being structurally sound but completely gutted, to falling apart but still filled with items. 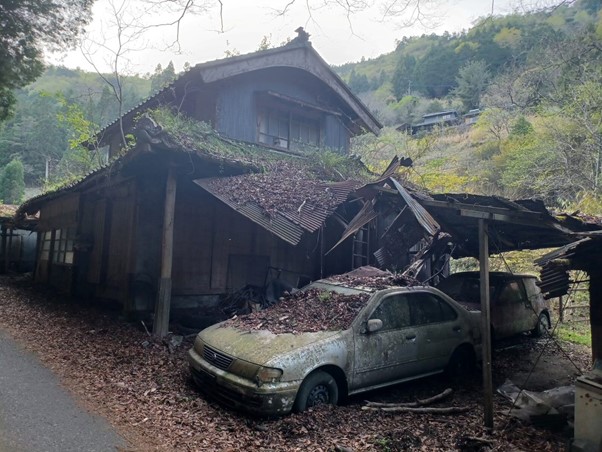 I once discovered a house that was collapsing in on itself, but whose garden was still tended to and had a tiny room filled with small, caged birds. I was startled somewhat to meet a man by this home, and I’m sure he was equally surprised by my presence, too.  We made polite conversation, my mind unwillingly thinking of low-budget slasher flicks. I was in the rural countryside of Japan, surrounded by decaying and abandoned homes. A dried-up swimming pool with rotting dog and animal bones nearby added to the creepy mood. It would make a good horror story . . . would it not? But we parted ways without incident. The man was amicable and seemed only to stress that I should turn back.

“There is nothing to see up there,” he said gesturing up the steep road, perhaps as a kind of veiled warning. Subsequently, he disappeared down the road on a rickety old bike with flat tires. Afterwards, I wondered if this surreal encounter in the hills of Tokushima had ever really occurred at all.

Exploring a kitchen area and behind what had been a function room with karaoke and a stage, we would find a photo album. It was filled with smiling faces, patrons, and staff members alike. It showed that, once upon a time, large tour buses brought many people to the spa’s entrance.

It would be good now to mention the Japanese concept of mono no aware. Its interpretation and translation can vary, but at its core, mono no aware boils down to mean the impermanence of things. Nothing lasts forever. But it’s more than just acknowledging impermanence. It also conveys feelings of melancholy, wistfulness, and nostalgia—gentle sadness at the passing of things. As I explored these abandoned places, it wasn’t quite excitement I felt. It wasn’t a thrill ride. They were, at those times, eerie, strange, and interesting. But the more I explored, the more I began to truly understand my experience and feelings. I didn’t yet know about mono no aware until later, but upon learning about it, it turned out to be exactly that melancholic sadness I felt that permeated through these forgotten structures.

After a small taste of my local environs, I decided to go further afield to more abandoned structures of note that could be found in Tokushima. Grabbing a friend and driving over to the eastern coast of the prefecture, we would find a desolate spa perched upon a forested hilltop and a ruined hotel nestled in the hills near a small but busy town. 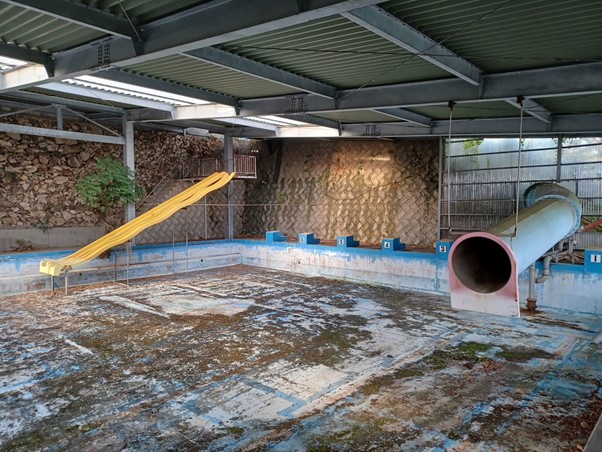 My urbex visiting experiences thus far were to small structures, but the spa was a massive complex. Once a thriving business, it had shut its doors, never to be reopened. Remnants of its past were to be found around every corner, most notably a large swimming pool. Exploring a kitchen area and behind what had been a function room with karaoke and a stage, we would find a photo album. It was filled with smiling faces, patrons, and staff members alike. It showed that, once upon a time, large tour buses brought many people to the spa’s entrance. Now, the spa was eerily quiet, an echo of the past, left to slowly fade away and to be witnessed only by the most passionate of urbex enthusiasts.

The hotel was a similar experience to the spa, although it was slightly more decayed and gutted of most of its furniture. At the entrance, almost like a museum display, stood numerous photo albums. These were no ordinary photo albums, however—they were wedding photo albums, each filled to the brim with various shots of happy couples. The hotel must once have been a wedding reception venue, but it was more than a little odd that these albums stood perched inside and in good condition. Unlike the spa, the hotel was in a more advanced state of dilapidation, with plant life choking many parts of the building. The large indoor swimming pool was particularly breathtaking, with flowers and beams of sunlight streaming inside. 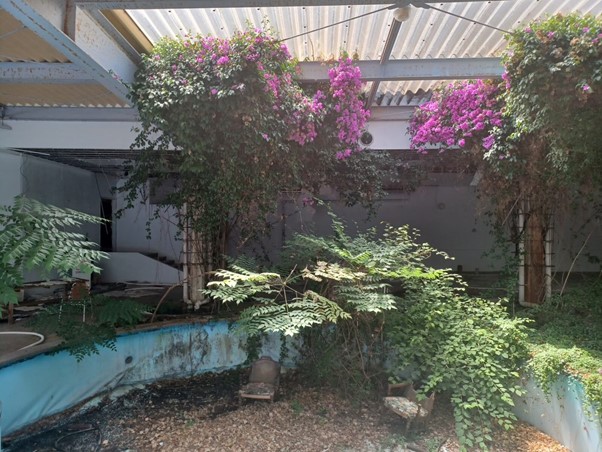 These accounts, for now, are the extent of my strange pursuits into the abandoned underbelly of Tokushima. It was far from what I expected when I eagerly awaited departure for Japan. But in reflection, they have been insightful experiences. Embracing the impermanence of things, the spirit of mono no aware, only gives you a greater appreciation for all the thriving things around you, should you look a little harder at your surroundings.

Perhaps you can also have a melancholic experience within the hidden world of abandoned Japan. You won’t have to look far. Since my aforementioned ventures, I have found myself stumbling onto more strange oddities: an abandoned elementary school, a rusting funicular railway, and even an abandoned apartment complex in Kobe—just a short walk from the shinkansen line, no less. The abandoned past of Japan survives on, in tandem with its vibrant and futuristic present.

Michael is from the U.K., a second-year ALT on the JET Programme based in Higashimiyoshi, Tokushima. He likes to write and share pictures of his experiences in Japan on his website. He also enjoys playing card games.