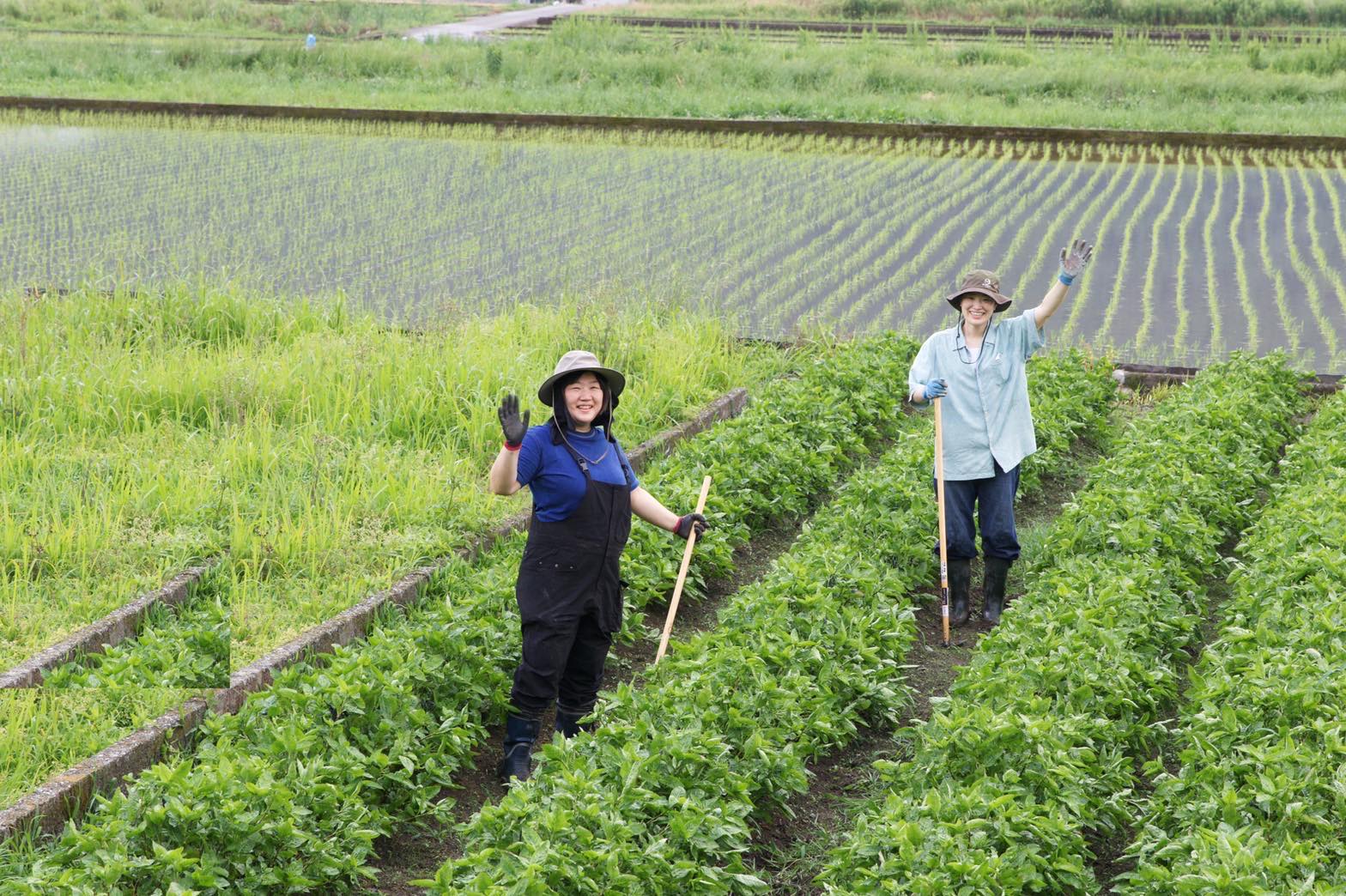 I was standing in the middle of a field with plastic bags tied around my shoes, slowly sinking into the spring mud. I’d come with a group of students, ages ranging from preschool to high school, to help weed a field of indigo plants as part of a community volunteer project. 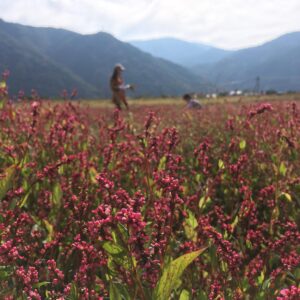 “Welcome to Aokike,” we’d been told on arrival, by two women wearing tall boots and wide sun hats. “Anybody bring rainboots? No?”

We hadn’t exactly prepared for the mud, but the kids were enjoying pulling up the thin weeds growing between the light green indigo sprouts.

“So this is what indigo looks like,” a kid next to me said, as she admired the rows of little leaves.

If you’re in Tokushima, there’s indigo everywhere—flashy posters advertising indigo dyeing workshops, stores selling indigo products ranging from scrunchies and masks to indigo cookies. But although I’d participated in indigo dyeing workshops many times, I’d never actually seen where the indigo came from. I looked back at the buildings behind us, a traditional-style Japanese estate behind a long stone wall, all the doors left open in the sun.

What is this place? I wondered. Community center? Art gallery? Government building?

A little of all three, it turned out.

More than a year later, I went back to Aokike to talk with Sakaguchi-san and Inoue-san, the same two staff members, to learn more. We sat outdoors, in front of a room with indigo-dye vats and big wooden tables, and talked as the two sorted a stack of indigo plants into piles. 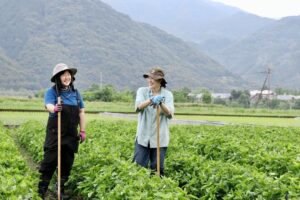 “We get asked ‘Why did you come here?’ all the time,” said Inoue-san, a young woman with shoulder-length hair, dressed in flowy peach-colored clothes.

Originally from Saitama, Inoue-san told me she was drawn to indigo and the chance to work in the Japanese countryside. She studied design in university and worked with cyanotype, a slow-reacting photographic process that uses a chemical solution and water to produce a pigment known as Prussian blue. But the process began to bother her. “I could tell it wasn’t very sustainable,” she says. “It polluted the water, and I just felt like it wasn’t something I could continue doing for a long time.”

She started looking into indigo-dyeing, aizome in Japanese, a more natural, sustainable process, and then she found something perfect: a job in Mima City, Tokushima Prefecture, working with indigo.

The job was part of Japan’s chiki okoshi kyoryokutai, a government program designed to revitalize rural areas. Under chiki okoshi, areas designated as jinko furi, low population, create specific jobs to attract people from bigger cities to relocate to their town. There are some caveats: the one-year contract is only renewable three times, and the jobs are only available to candidates who would be moving from higher-population areas to designated low-population ones. 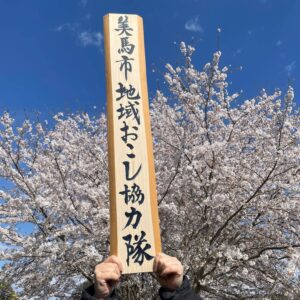 Some chiki okoshi positions are mission-oriented or project-oriented, with specific job descriptions and expectations. But some are up to the person in the position to set their own goals and design their own projects. The Mima City job fell into that category—the only requirement was to use indigo to connect with the local community. Inoue got the job, and moved to Tokushima in June 2020.

Sakaguchi-san, on the other hand, was born and raised in Tokushima. She has short hair and dimples when she smiles, and told me that she’d heard of aizome as a child but had never done it. After more than a decade of doing woodworking in Gifu and Nagano, she returned to her hometown of Naruto City, and began dreaming about opening her own woodworking shop. But Sakaguchi-san also wanted to infuse her woodwork with traditional Tokushima craftsmanship—specifically, aizome. To do that, she knew she’d need to develop her skills somehow.

Like Inoue-san, she searched for jobs online that would allow her to work with indigo—and found the same chiki okoshi job in Mima City. She started one year after Inoue-san, in 2021.

There’s no certificate or standardized course in aizome, although Inoue-san received some training from a professor at Shikoku University. She brought out some jars and dried bricks wrapped in paper to show me the different sorts of indigo they make at Aokike. Indigo paste, they explained, is like a paint, able to be brushed directly on artwork or used for calligraphy. Dried, fermented indigo leaves, on the other hand, are used for indigo dyeing. This product is called sukumo.

“A lot of people think Tokushima is known for indigo dyeing,” Sakaguchi said. “We’re not. We don’t have a history of indigo dyeing at all.”

“Yeah, this whole ‘Tokushima indigo dyeing’ thing is just the prefecture using it as PR to sell themselves,” Sakaguchi-san adds. 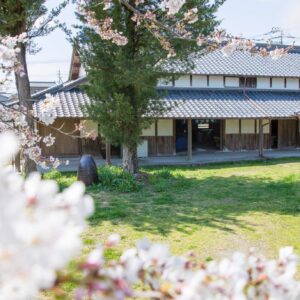 “And maybe the history is changing now,” added Inoue-san. “We’ve been known for sukumo, but from now on maybe we’re going to be more famous for dyeing.”

They tell me how the Tokushima indigo brand Buaiso has become popular in recent years. So popular, in fact, that Kanye West even came to Tokushima in 2019 to try aizome.

When I asked what the most interesting part of the job is, Sakaguchi-san was quick to exclaim, “Indigo!” She told me that working with indigo combines all sorts of different subjects—history, Japanese language, chemistry. This means there is no such thing as a typical day at Aokike. The job changes with the seasons and the community’s needs. Indigo seeds are planted in March, and most of the summer is spent working in the fields. Harvest is from July to September. Then they seperate the plants into batches for drying, and batches to make indigo paste and sukumo. Throughout the year, they also help with the city’s indigo PR, hold indigo dyeing workshops, and host school field trips.

And, of course, getting to work outdoors surrounded by beautiful mountains, along the Yoshino River, is also a plus.

“People born here are so used to the scenery that they take it for granted, but it really is so beautiful,” they both gestured around us. The fields were filled with shades of greens and browns, a stark contrast against the dark soil. In the distance, the mountains were a deeper green, stretching north to the horizon, the farthest ones just a hazy smudge of dark blue, like indigo.

Aizome is an excellent way to revitalize the local area, because it’s not only about art, Sakaguchi-san told me, but about community health and agriculture too. Because chiki okoshi jobs are funded by taxes, she says it’s a great way to keep alive natural processes that would otherwise die out, as well as bring more people to rural areas.

“Maybe these kinds of jobs or art aren’t very compatible with capitalism,” said Inoue-san. “But the community has decided they’re important.”

Mima City has a few other chiki okoshi jobs—some making wagasa, traditional Japanese umbrellas, others working as “food coordinators,” designing and advertising recipes using local ingredients. Inoue-san tells me that four other people have held the aizome position before her, which was created in 2014. An impressive 67 percent of chiki okoshi workers decide to stay in Tokushima after their contracts finish.

But chiki okoshi jobs also come with their share of difficulties. Both women said that finding a place to live was difficult, especially from outside the prefecture, during a pandemic. They were surprised that the city didn’t offer any support to those relocating to Mima for chiki okoshi, especially considering that many other prefectures offer substantial housing support. 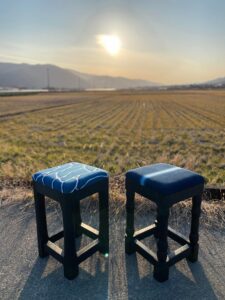 Inoue-san searched for a place to live online, and when she finally found one, arrived to find it dirty and in disarray. Then, on her first day of work, Inoue-san says the toilet at the workplace was unusable. She didn’t feel like the city had really prepared for her to be there.

More positively, however, chiki okoshi jobs can serve as an on-ramp to an artistic career. Buaisou is one of the few companies hiring people to do aizome, so most people interested in the art know they’ll have to start a business or freelance if they want to pursue it. Chiki okoshi jobs are a great first step. “They’re jobs where you can get a salary and practice your skills for three years before opening up your own place, starting your own projects,” Inoue-san explained.

Both Inoue-san and Sakaguchi-san plan on doing just this. Sakaguchi-san wants to open her own workshop, using woodwork and traditional crafts from other prefectures and indigo dyeing them. “It’s good for Tokushima Prefecture, and also good for other areas,” she says. “I really want to connect different regions like that.”

Inoue-san also wants to continue pursuing aizome, and remain in Tokushima. She says one of her goals is to set up Aokike as a place that can continue to be used by the community for indigo even after her contract has finished. 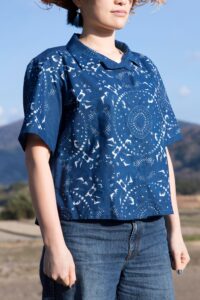 When I asked them to show me the aizome piece they’re most proud of, Sakaguchi-san excitedly stood up and hurried to the back, and Inoue-san excitedly said, “The stools!” Sure enough, Sakaguchi-san emerged with two beautiful wooden stools, one crafted from sugi and one from hinoki wood. She told me the wood took about three days to carve, but the aizome fabric on top took almost three weeks. “I dyed the fabric for about 30 minutes a day for 20 days,” she said, laughing. “Aizome can take so long. You have to let it sit.”

When I asked Inoue-san what she was most proud of, she closed her eyes and tilted her head, thinking. “Mmmm, there was this shirt,” she said, showing me an Instagram photo of a hand-sewn, indigo-dyed shirt featuring a detailed, continuous pattern she says took half a year to design. But then she shook her head and showed me another photo. “This one,” she said.

It was her hands, fingers spread, dyed a deep, indigo blue. 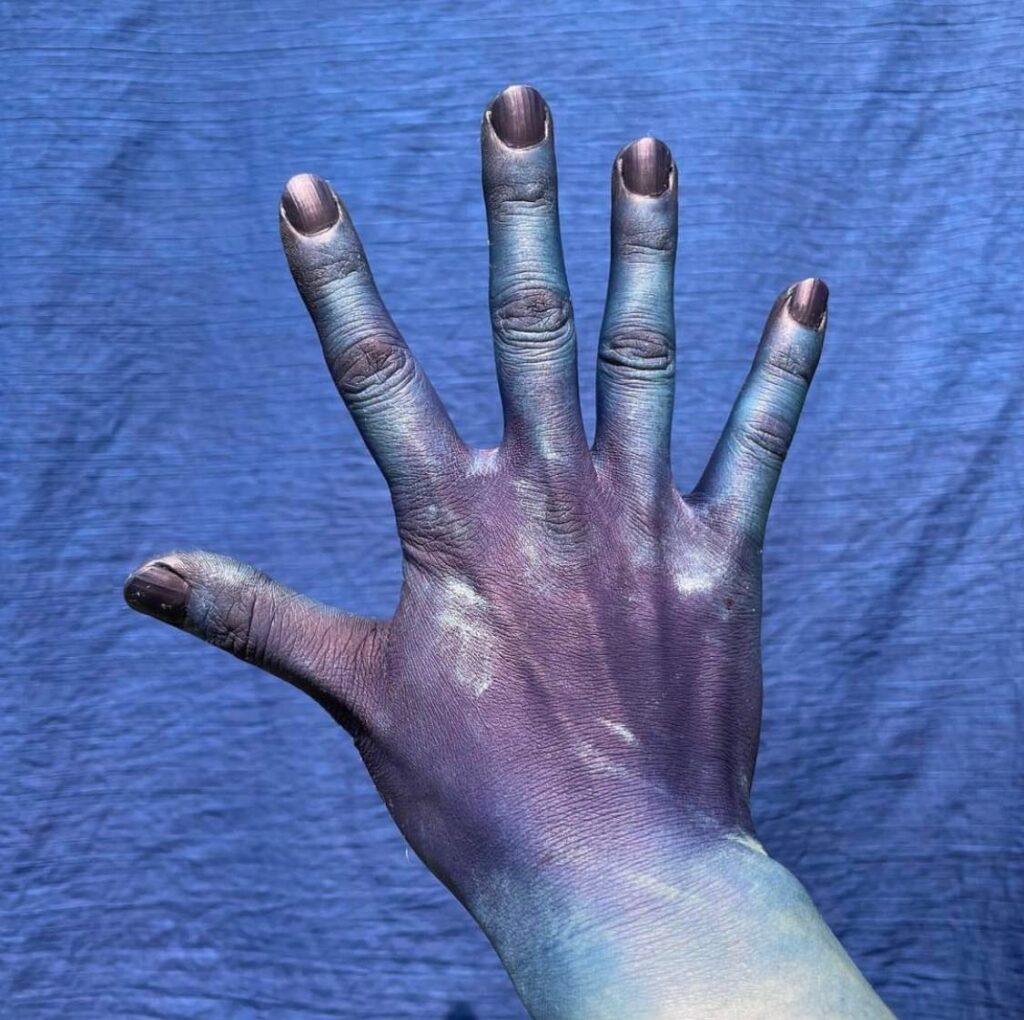 Amber Bunnell is a former JET (Tokushima 2016-2019). She runs Kohaku World English, a language school based in Tokushima, and is a founding member of the not-for-profit organization Tsunagu Mima World Community. When not teaching or volunteering, Amber enjoys camping and travel, and is obsessed with onsen. Follow her at @ambersensei.mima on Instagram.