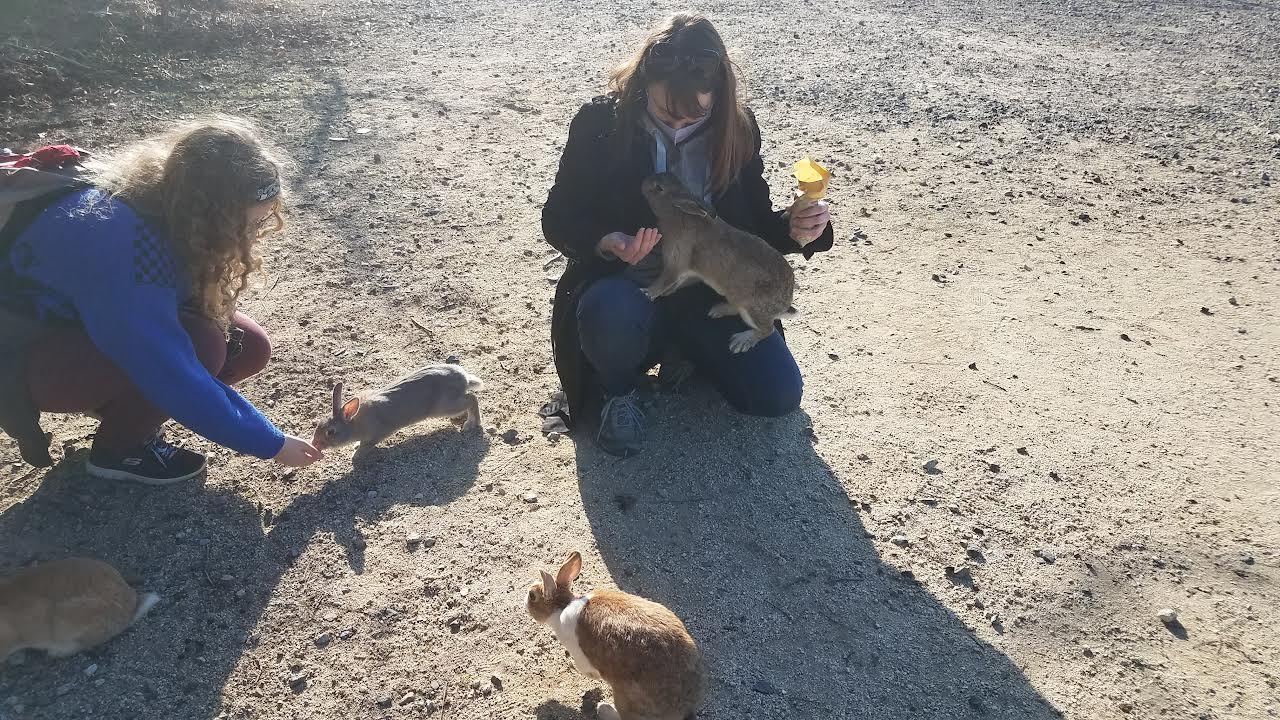 On a small island off the coast of mainland Hiroshima prefecture, shrubbery lines the lush green mountains at the bases, something hiding beneath. Under these bushes are adorable rabbits that resemble balls of fur as they relax in the shade. Other rabbits hop around in open areas near a port where tourists arrive, as if used to people. Seen from the port are dilapidated building ruins scattered throughout the island of Okunoshima that once served a national, albeit nightmarish, purpose.

Okunoshima, near to Tadanomi Station along the JR Hiroden Line in Hiroshima, has a tiny port that can take you to and from this tiny island off the coast of the small city Takehara. Growing in popularity among Japanese and international tourists, Okunoshima is most well-known for its abundance of rabbits living on the island, hence its nickname Rabbit Island, or Usagi-Jima (うさぎ島). This island has countless rabbits that await visitors near the port where they arrive and more around the island. Hiding under the shrubbery or basking in the sun, the cuddly animals bring joy to visitors of all ages, making Okunoshima a popular destination that visitors to Japan must experience.

During my first visit to Okunoshima in the early summer of 2022, I couldn’t see much as heavy rainfall made it harder to explore the island that day. Despite this, I devoted time to finding and feeding the rabbits, as wet as they were, with the celery I bought. Many rabbits hid under green shrubbery and picnic tables under roofed seating areas to stay dry from the rain. With this weather, there was no way I could cover myself with rabbits like some visitors have done when more rabbits are out and about. Nonetheless, I had plenty of fun spending time with the rabbits, and I look forward to going back with my family on a nicer day.

Currently, we do not know much about the island’s rabbits. There is no concrete answer explaining why the rabbits live on Okunoshima or how they got there in the first place. One theory proposed that the present-day rabbits are descendants of the original test rabbits used for poison gas manufacturing during the war, but no evidence supports this. Some guess that a group of school kids may have introduced them to the island at some point, although it is unclear what their reasons would have been. (4) However, many fluffy rabbits live on the island today, entertaining visitors with their cute charm.

On the surface, Okunoshima makes a bright impression with its furry critters, but the island has a lesser-known history that reveals its dark past, strongly contrasting with its present state. Scattered around the island are ruins of building structures that once served a nationalistic cause. These ruins were factories that produced poison gas weapons for Japan that its military could primarily use in its warfare abroad in China during World War II. (2)

In order to conceal its location from enemies, Japan erased Okunoshima off the map while it continued its production of poison gas to send to the military. Because Japan was an official signatory of the 1925 Geneva Protocol, which banned chemical warfare but not the development of chemical weapons, the Japanese government’s decision to hide Okunoshima from official maps was problematic for the island’s residents and workers. (3)

According to Okunoshima Island Poison Gas Museum’s gas plant exhibit, the island’s residents and potential employees had no knowledge of what the island’s factories were producing. Many factory workers worked in strenuous conditions, some of which dealt with poisoning from gas production. At the end of World War II, residents and former workers had to remain silent about Okunoshima’s poison gas production; only in recent years have workers finally received treatment aid from the Japanese government for their toxic-related illnesses. (3) The Okunoshima Island’s Poison Gas Museum does a superb job of illustrating what makes poison gas deadly and the devastating effects of warfare.

Although it is safe to assume most tourists visit Okunoshima to see the rabbits, there are downsides to the sizable rabbit population. First, Okunoshima’s rabbit population is said to be too large for the island to sustain. Given the lack of resources due to the factory remains and surrounding environment, there isn’t enough natural feed, or grass and plants, to feed all the rabbits. Because of that, many rabbits rely on tourists to provide them with food whenever they visit for a day trip. (1)

Many rabbits have opportunities to eat food during summer vacation by tourists, but some face starvation during the winter as fewer visitors come to Okunoshima. In addition, the feed tourists give the rabbits is not always healthy. While cabbage is widely-believed as safe for rabbits to consume, it does not contain the fiber needed for rabbits to sustain a healthy life. (1) Some tourists have also raised concerns about feeding rabbits food meant for humans, like bread. While giving the rabbits food is not prohibited, tourists must be responsible as they interact with the tiny critters and confirm that the food they feed the rabbits is safe for them to consume.

As tourism gradually increases with more countries allowing international travel, visitors to Japan and those residing here should visit Okunoshima. Tourists from within and outside Japan can take the ferry from Tadanomi Port, and the gift shop contains a plethora of rabbit goodies. Along with its rabbits, various poison gas factory ruins remain today, reminding visitors of Okunoshima’s role in assisting the Japanese military with weapon production during World War II. For those curious about history, this island is a must-visit to learn about a fascinating, yet not well-known, topic. Even with a dark history steeped in its past, Okunoshima has transformed from a poison gas production site to a rabbit paradise.

Veronica Nielsen is a first-year Coordinator for International Relations (CIR) located in Hiroshima prefecture. She is currently working on translating web promotional materials, social media PR activities, and educating the local community about various aspects of American culture. She enjoys hiking around Japan and is on a mission to scout out historic sites across the country.