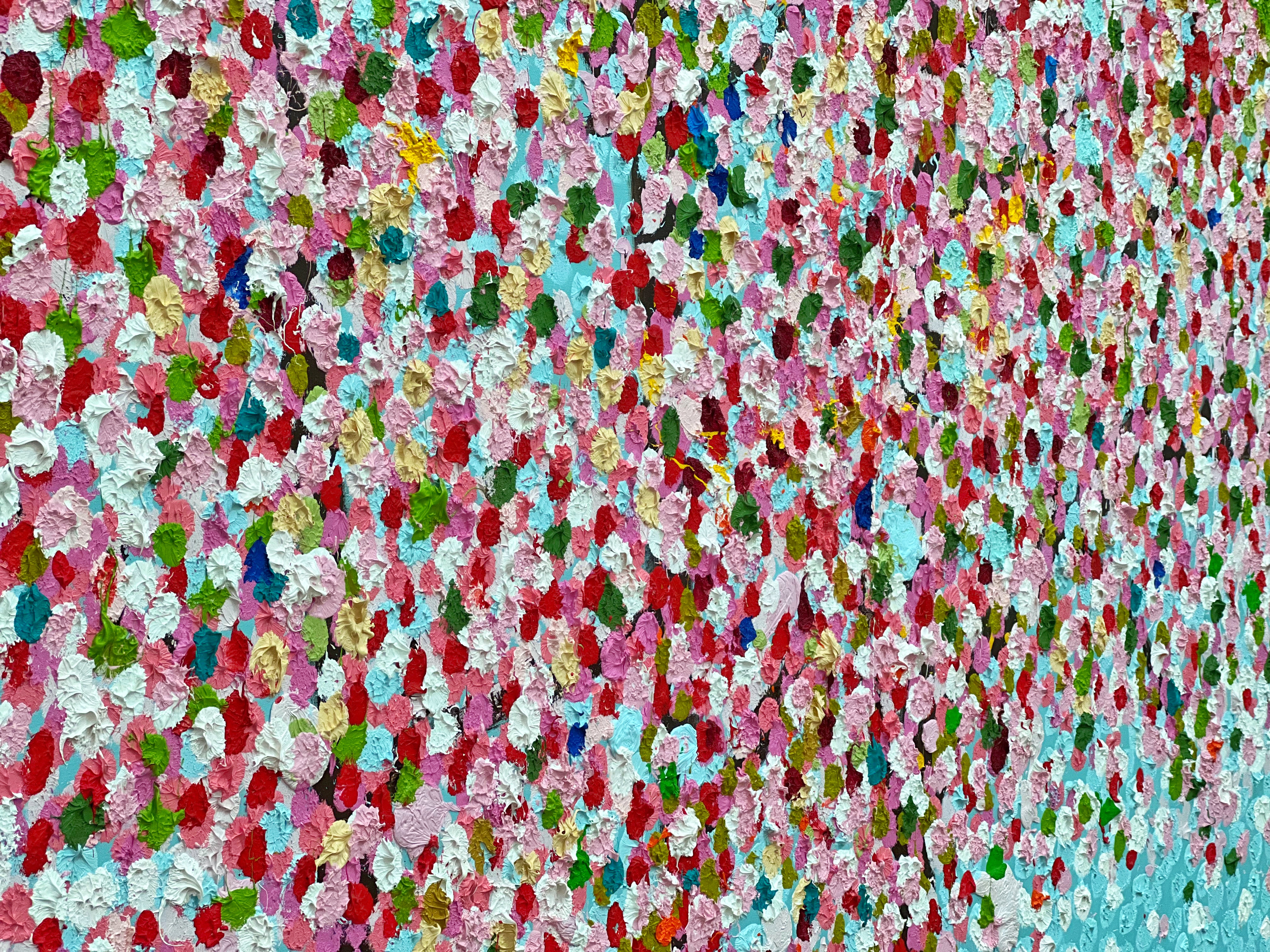 Damien Hirst opened, in cogent detail and direction, his first exhibit in Tokyo at the National Art Center earlier this year. Subtly called Damien Hirst, Cherry Blossoms, this was the artist’s first major solo exhibition in Japan. The collection was first launched at the Fondation Cartier pour l’Art Contemporain in Paris in July of 2021.

Spring is a ubiquitous yet timeless subject in art. The season represents new life—fresh starts, nascent beginnings, and in a time of desolation brought about by the pandemic, the New Normal. Known for his elaborate body of work that includes animals preserved in formaldehyde and live creatures in a glass tank containing the entire life cycle of thousands of flies, Hirst takes on another enticing biotic element: the sakura, the classic symbol of Japan, an eternal embodiment of spring. For this series, Hirst has worked on 107 oil paintings, 24 large-scale pieces of which were featured at the exhibit.

This cheerful suite of canvases employs the Neo-Impressionist style known as pointillism, popularly introduced by French artists Paul Signac and Georges Seurat, the latter referenced by Hirst himself as an influence in this series. Flickering, small dots—points—of color bleed with each other to form subjects and scenes. Hirst utilizes unmixed pigment to represent nature, an essential feature of pointillism.

Another characteristic of Hirst’s tree scenes is the obstruction of the sky as background. It is only revealed through glimpses at the margins of the paintings, as if the season is secondary to the subject. The trees are canopy-like, enveloping the viewers as they move from one painting to another, giving an impression of walking through a large room with oversized windows with pink petals rustling in the view.

The windows do not endeavor to convey light. Instead, they provide vivid imagery of the fragility and potency of the sakura. Some of the paintings were placed in triptychs—three panels arranged side by side—which highlight the vastness and supremacy of the sakura during the season. The largest painting in the exhibit, Greater Love Has No-One Than This Blo

ssom, measures 549×732 cm. The embodiment of something as fleeting and delicate as cherry blossoms in something vast and permanent as a painting extends the common themes in Hirst’s work: life and death, religion and science. 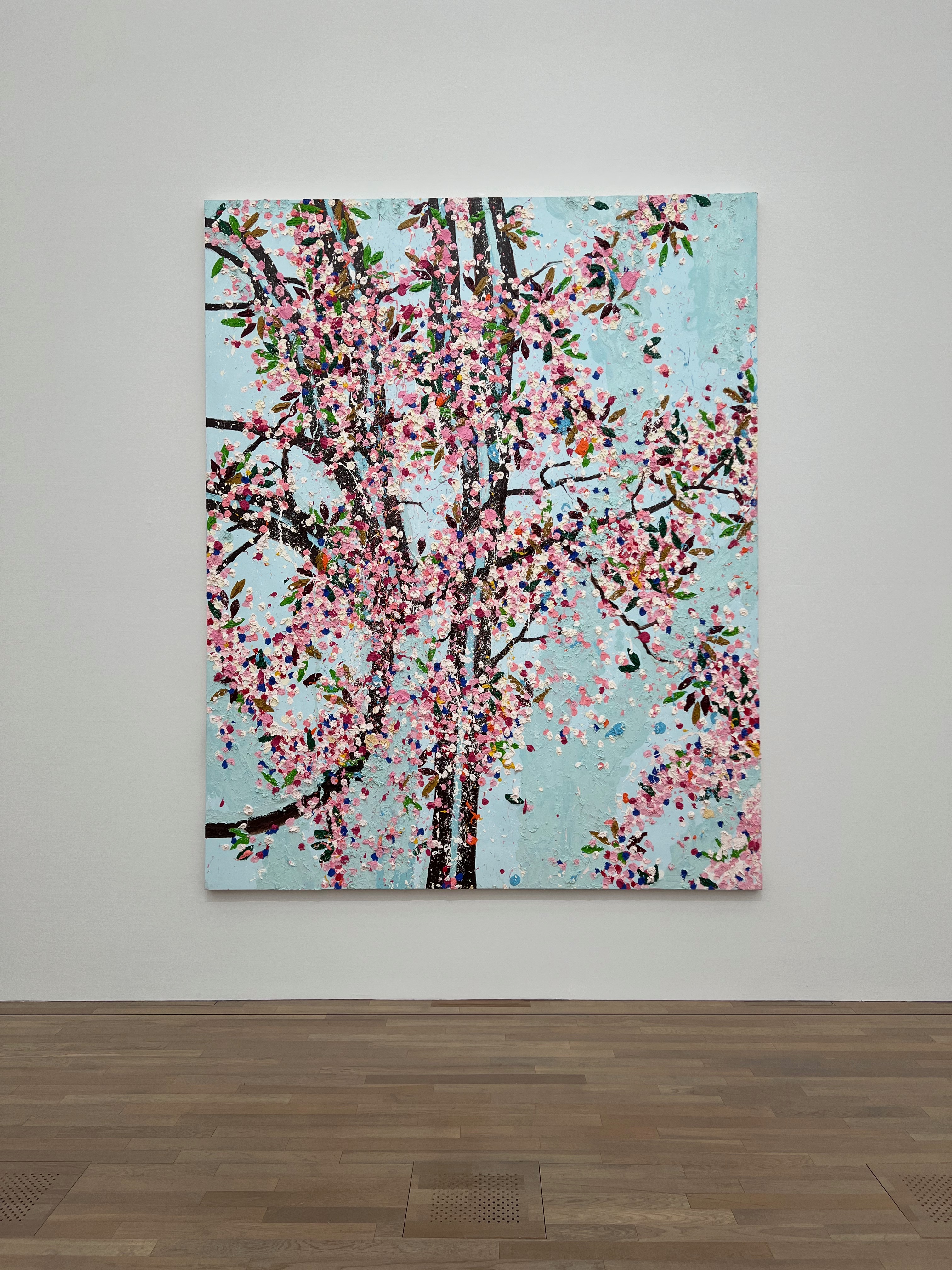 The embodiment of something as fleeting and delicate as cherry blossoms in something vast and permanent as a painting extends the common themes in Hirst’s work: life and death, religion and science.

These dualities indicate the physical and traditional role of the sakura in how seasons change. During the exhibit, viewers are prodded to interact with the paintings. Patrons sat on the floor viewing the trees from the ground, a reminder of humanity’s minute existence juxtaposed by the tall trees and wide canvases. Some walk around it as if in a park or a forest, while some watch across very closely, trying to make out the textures and pigments on the surfaces.

Thus, the exhibit becomes a venue for what the Japanese call hanami, literally “flower viewing,” a sort of public picnic where people eat, converse, and enjoy the sight of blooming sakura. Trees are also very essential in the Japanese tradition of shinrin-yoku, the Japanese art of forest-bathing, where people head to densely forested areas to destress.

From a distance, every canvas clearly depicts cherry blossom trees in full bloom. Spined by the trunk and the branches of the trees, petals are depicted predominantly by varying hues of pinks, blues, reds, yellows, and greens. But as one studies the paintings more closely, the canvases reveal something else entirely. Textures become more apparent and more tangible between potent layers of vibrant pigments. 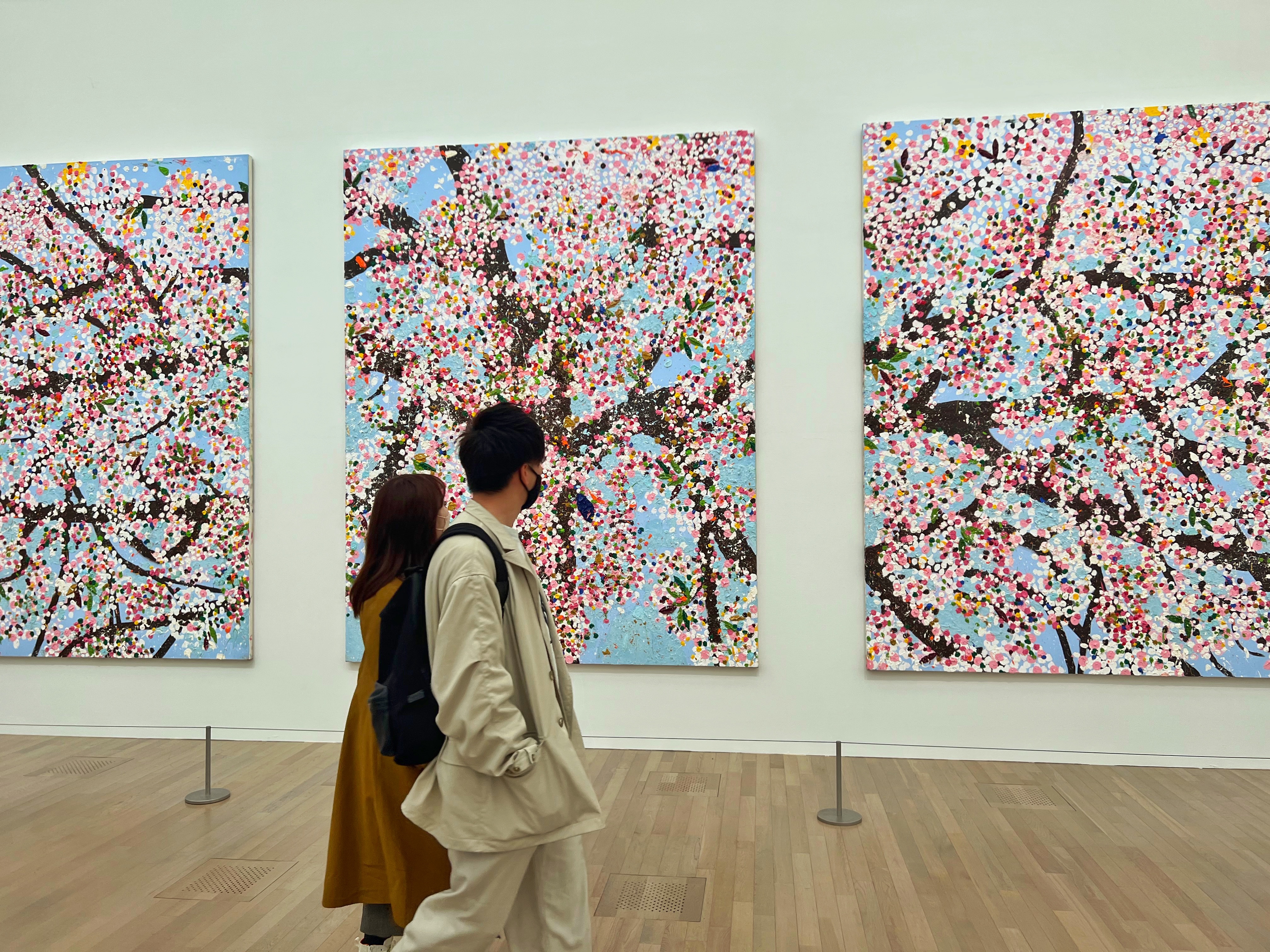 The energy of Hirst’s works lives in these textures: when the strokes are met with the splatters. Referencing the work of Francis Bacon who “throws” paint on the canvas and drip-painter Jackson Pollock in the documentary film produced to supplement the exhibit, Hirst says that in the moments when the brush does not touch the canvas in painting “all hell breaks loose” and “the world’s over.” In terms of subject and style, the exhibit revolves around the transitory yet infinite nature of cherry blossoms.

Damien Hirst, Cherry Blossoms expresses the magnificence of cherry blossoms and the wonders it brings from a single pink leaf to a long branch to a confusing smudge of orange somewhere. That it is impermanent and small as a petal yet so memorable; how it is fleeting but manages to bring a community together. These are what define cherry blossoms, and by extension, art.

Ian Layugan is a second-year JET in Kiryu City, Gunma Prefecture. He enjoys hiking, reading essays, exploring museums, and dabbling in cooking fried chicken. He is the Community Section Editor of CONNECT and blogs at ianlayugan.com.