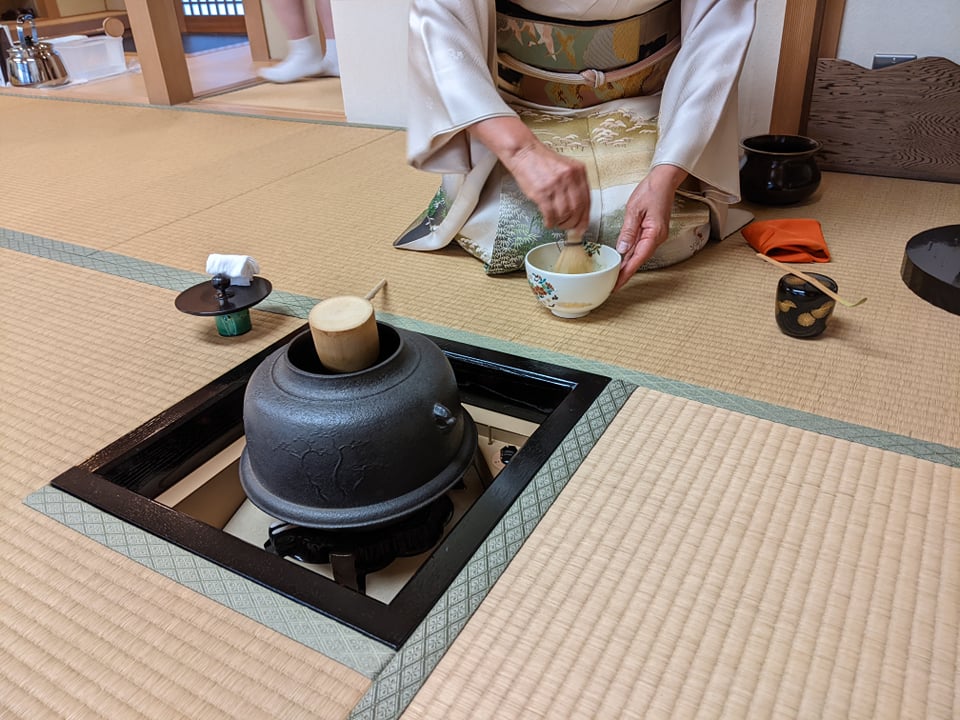 In the words of Rikyu, the founder of cha-no-yu, the Japanese Way of Tea: “With respect to cha-no-yu, just make the water boil; and after the tea is prepared, simply drink it.”

Growing up as a Chinese Canadian, I am no stranger to tea. Every weekend, without fail, my dad would boil a pot of water for his morning tea. He would then choose between one of his many red clay teapots to use for that day. He’d put in his tea leaves of choice—biluochun, tieguanyin, or huang guanyin. He’d then pour the water in, and allow the tea leaves to steep.

There’s a process to making tea, he told me: how long you should let the leaves steep, the temperature of the water, and even the type of clay pot you should use. When I first started attending chado, or tea ceremony club, at my school, I couldn’t help but think of those mornings with my dad. It’s not because of any similarities in the tea preparation or even taste; the matcha commonly used in chado is quite different from the teas my dad would make and drink. No, it was the ceremony behind it that made me nostalgic—the time deliberately set aside for people to simply sit down and enjoy tea.

Two years ago, I was new to the school and new to Japan. I spoke little Japanese, and was very far from home. I was still getting to know the teachers and students I would be working with. I was also getting used to the idea that this country would be my home for now. It was my first time in Japan, and while research from books or the Internet could give an idea of what to expect here, I was still anxious about how much I didn’t know. Cha-no-yu felt like such a uniquely Japanese experience. I felt that trying it through chado could help me connect not only to my school, but to this entirely new country, if only just a little.

I am pleased to say that chado was able to help me do that, and more.

In the beginning, I attended chado as a guest. Guests have a special spot reserved for them to sit in the tatami room, and they are treated with the utmost respect. However, there are also expectations on the guests to act in a certain way. For example, after the wagashi (sweets) has been served, the first guest will bow, say “Chodai itashimasu” (I will partake of the sweets), and then turn to the next guest and say “Osaki ni” (Excuse me for going before you). While eating the sweets, guests can enjoy watching the host or hosts prepare the matcha.

One of the greatest challenges of one who wishes to attend a tea ceremony is mastering seiza (correct sitting). No matter if you are attending the ceremony as a guest or as a host, this form of sitting is expected. Unfortunately for me, my legs would be pins and needles after ten minutes or so, and I would have to sit out of position for a bit, struggling to get the blood flowing again. The teachers were never cross at me for doing so, merely chuckling and asking “Ashi daijoubu?” after which I would hastily answer “Daijoubu!” while trying not to let my legs die.

As with all things, I got better with practice and could sit seiza for longer periods of time, and soon, I had the opportunity to play the “host” myself—though after two years, I still feel like I’m a complete beginner to chado. There is an order to the preparation of the tools used and in the steps to the tea made that the host must remember. Even after memorizing the steps, there’s still a large gap between my abilities and those of the teachers and even students who have done this for years. [[pull-quote]]For them, the motions of chado seemed to come as naturally as breathing. The tools were an extension of their own body and every motion looked deliberate and refined. It’s all because tea preparation is a performance art in its own right.[[pull-quote]]

The tools of chado include the chakin, a small linen cloth used to wipe the chawan, the chasen, used to whisk the matcha, the natsume, or tea caddy that holds the matcha powder, and the chashaku, or tea scoop. I was given my own red silk cloth, called the fukusa, that is used to ritually “purify” the chashaku and the natsume. All tools must undergo this purification process before they can be used to prepare tea.

The process reminded me again of those weekend mornings with my dad. Since he had so many teapots, using each one was necessary because, as he said, “These pots are meant to be used. In order to get the full value of the pot, you must use it as often as you can.” I can’t help but feel that chado treats its own tools similarly. Tools are so important to chado that there’s even time allotted for guests to admire the design of their chawan after they have enjoyed their tea.

I was given an English guidebook by one of the teachers in chado and an English translated volume of Rikyu’s Hundred Verses, a set of rules for how to host a traditional tea ceremony penned by the founder of chado himself. Over time, as I attended more and more club meetings and got to know the members of the club better, I was introduced to more of these traditions. Soon, I was reading some of Rikyu’s verses aloud in English to the students before club would begin.

The teacher told me how chado connects people together, even when there is a language or cultural barrier. Everyone can sit down and enjoy tea. Even with a written set of traditions, it’s not as though new ones can’t be created. All that one needs to participate in chado is an open mind and a willingness to learn. It does not matter that I have not mastered the art to perfection, or that I sometimes forget the steps. What matters is the time I spend with these people and the attitude I put towards chado. There are no failures, simply a continuous process of learning.

When I drink matcha in the tatami room here in Japan, I am transported back to those mornings with my dad, all the way back in Canada. Rikyu is right; even with all the miles that separate me from home, anywhere I go, tea is tea. Boil the water, prepare the tea, and drink it. You can apply the same concept to other aspects of life. Despite all the miles that separate me from all I have known, and the differences in how my dad and the club members prepare tea, fundamentally, things are not that different. The familiar can always be found in the foreign. Something can always connect us.

Evelyn Yun is a current Tokushima JET who has finished her third year of teaching in Japan. Aside from learning about tea ceremonies, Evelyn enjoys doing arts and crafts, playing video games, and exploring the city.