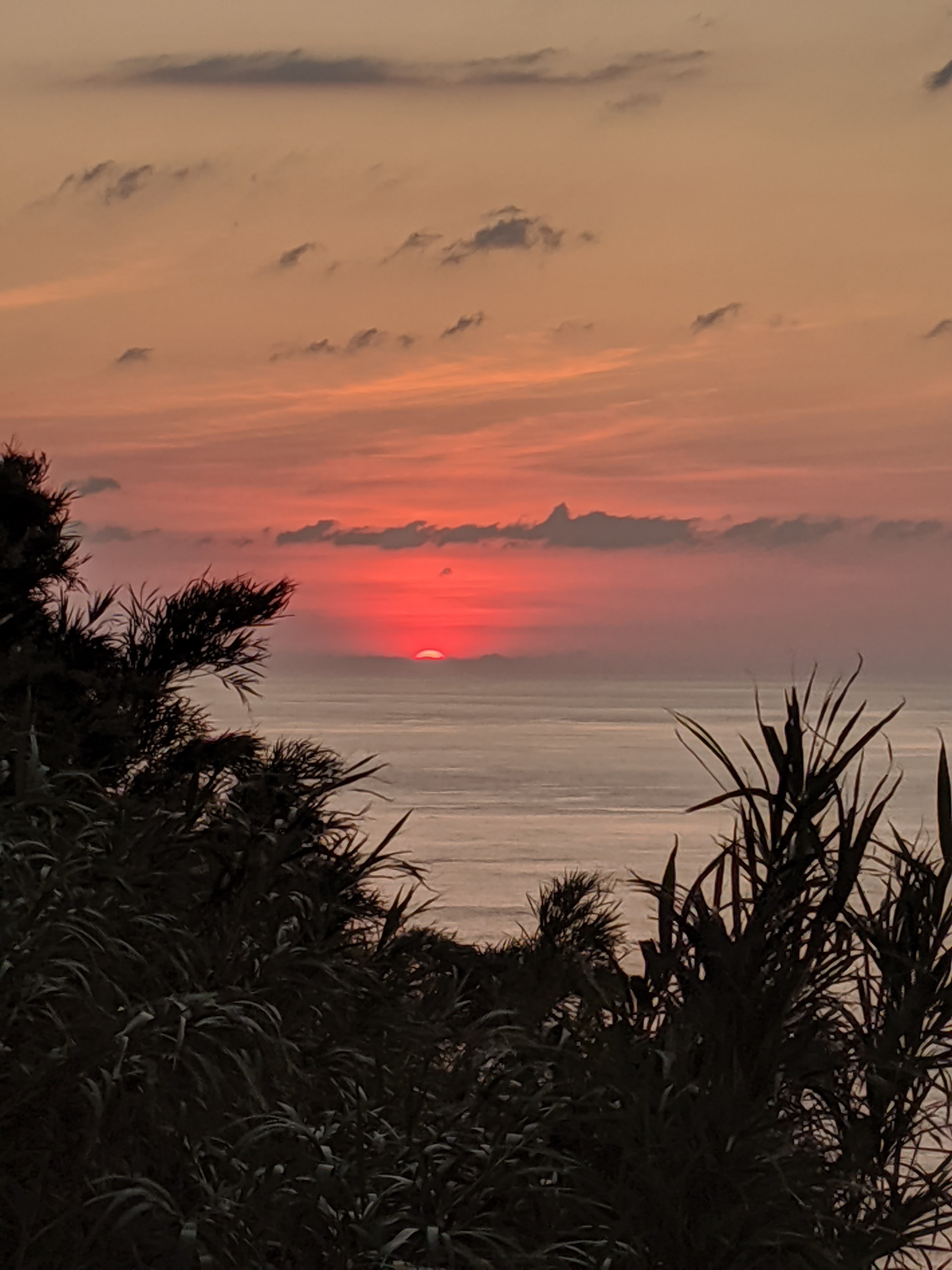 South of Yakushima and North of Amami Oshima, deep in Kagoshima prefecture, sits Japan’s longest “village” Toshima. Toshima Village, known as “Japan’s last unexplored region”, is a group of 7 inhabited islands and 5 uninhabited islands that altogether make up the Tokara Archipelago. The inhabited islands include, from north to south, Kuchinoshima, Nakanoshima, Suwanosejima, Tairajima, Akusekijima, Kodakarajima, and Tokarajima. I live on Tairajima, the centermost as well as second-smallest inhabited island. The population of Tairajima is a mere 89 people. Like most islands in Toshima, it is the leftover of a now inactive volcano. Surprisingly, there is an ALT on each of the inhabited islands in Toshima. Our schools are combined elementary and junior high schools with the largest number of students being 17 in any school.

Life in Toshima isn’t quite like most other placements on JET. There are no airports or active charters in Toshima, making the only way on and off the islands a ferry that runs twice a week—if the weather is good. There are no conbinis, grocery stores, or gas stations in Toshima. The only way we get food is by ordering our groceries online which come on the Saturday ferry. Tairajima, being the centermost island, is 9.5 hours away from both Kagoshima City and Amami Oshima.

As I’m sure you can imagine, a placement in Toshima comes with its own challenges and hurdles to grapple with, social isolation being one of the hardest. Being the only foreigner and living on an island consisting mostly of older people has been an exercise in both patience and figuring out how to spend time by myself. Like most JETs, I had compiled a general list of the things I wanted to do and places I wanted to go while on the Program. But, even before Covid-19, because I’m placed so far away from any sizable city or airport and limited to the twice-a-week ferry, it’s been difficult—if not impossible—to tick off my bucket list. Touching on the current pandemic, luckily Covid-19 has barely affected my island life: due to the small population I can go walking, trekking in the jungle, and swimming at the beach just as often as before.

Living in such an isolated place has taught me that finding what makes your placement special (something you can experience that others living elsewhere can’t) is crucial to both gaining an appreciation for your surroundings as well as handling being away from the people you know. A few of the things I’ve come to appreciate about my small island are the deserted beaches where you can go swimming, the incredible year-round fishing, the beautiful sunsets, and the local festivals that you can’t find anywhere else in Japan. One such annual festival is Kasedauchi; an islander dresses up as the local deity, the Futtokojin, and comes to each house to eat sushi, drink sake, and then rub black ink on your face as a sign of good luck for the year. While the Futtokojin is travelling between houses, children run out from hiding places to drench the deity with buckets of water.

Another necessary practice I’ve found in dealing with the isolation is spending your time in ways that you enjoy. I’ve spent this time continuing to learn Japanese, as well as picking up hobbies I didn’t have time for in the past. It helps if you are genuinely interested in what you are doing to pass the time. I’ve experimented with multiple different hobbies trying to find things that I both enjoy and can share with my neighbors and coworkers, one of the big ones being gardening. This year I planted habanero and jalapeno peppers. Unfortunately, only two habaneros came up and only one has fruited so far. But I’ve had a lot of fun figuring out what I did wrong this year as well as talking to my neighbors about what they suggest growing. I’ve planned out next year’s garden and am looking forward to sharing the spoils of my hard work with my fellow islanders.

Fishing is another hobby I’ve picked up thanks to the islanders. Growing up in Tennessee, a land-locked state, I never really had a chance to do much sea fishing. For the islanders however, fishing is an interesting mixture between a hobby and a way of life. They’ve taught me what fish are in season, what is edible and what isn’t, as well as the different types of lures used for certain fish. They’ve also taught me how to make my own sashimi, which is something I’ll have a hard time giving up after I leave the island.
While finding the time to take up new hobbies is important, I’ve found that making the time to continue hobbies you had before JET is just as, if not more, important. Before coming to Tairajima I spent a lot of time reading, hiking, and playing video games. Living the island life has given me just as much time to pursue those hobbies as well. Luckily there are no snakes living on this island, so I go on near-weekly hikes up into the jungle on my island. The expansive banyan trees create a cathedral effect throughout the jungle which echoes the sounds of the birds and goats moving about. I’ve even purchased a hammock I take into the jungle and hang in when it’s not unbearably hot. Along with hiking, I also try and spend a little time every weekend playing games online with my friends back home. Unfortunately, we are in the midst of typhoon season at the moment, so it’s not uncommon for the WiFi to go out and be out for days on end. But, I try to make the most of my time disconnected and either read or study some more Japanese.
While hobbies are good for keeping you occupied and focused on things other than being alone, I’ve realized that they can never really replace interacting with others. Despite taking up new hobbies and continuing old ones, I’ve still found myself desperately missing my family and friends as well as just going out to restaurants or stores to be around other people. There really is no replacement for being around people. Talking to my family and friends a few times a week and planning out the times out in advance helps me both feel a bit less out of the loop.

I’m also constantly thinking about my next trip off the island. Whether it’s just to simply hop on the ferry one weekend to visit an ALT on another island, or planning out next year’s Golden Week vacation. I try to keep myself focused on the future. I also spend lots of time planning and prepping for my post-JET move.

Unfortunately however, there are no “quick fixes” for social-isolation. Living in a foreign country, especially on a barely inhabited speck of land, will inevitably cause you to feel incredibly isolated and separate from the world you’re used to. As with any negative feeling, it’s necessary to first acknowledge it and understand that it’s a totally normal feeling. And although it’s inevitable, there are definitely things that can be done to lessen the feeling and help you move past it once it arrives. The things I’ve listed above are the practices and thought-processes that have helped me. They are in no way a sure-fire fix to the feelings of isolation, but they have helped me cope with living on a little rock in the middle of the ocean.

Caleb is a second-year JET on a little island in Kagoshima Prefecture. Originally from Tennessee, he spends his time relaxing on the beach and watching the sunset. His criminally near empty blog can be found here.