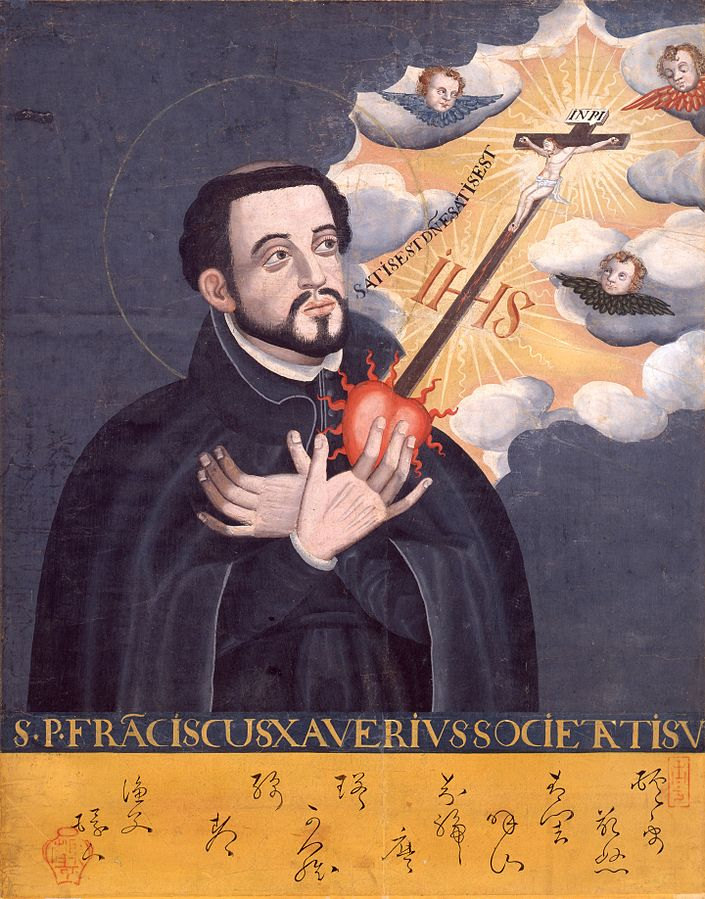 Christianity’s impact on Japanese culture is . . . debatable. Don’t get me wrong, it’s definitely there—in fact, I wrote an entire article about it last month!—but sometimes, it can be hard to clock. Traditions for Christian holidays like Christmas have changed to fit Japanese tastes past the point of recognition for most foreigners (“Christmas is Kentucky”, anyone?), and the aesthetics of Christianity seem to be embraced rather than for its ideologies. Previously, I discussed how the religion has permeated Japanese culture, as well as interviewing a Japanese Christian to learn more about contemporary Japanese views of Christianity. Through the interview, I better understood not only Japan’s image of Christianity, but also how Japan viewed religion in general, and I hope some readers will be able to as well.

The one thing I still didn’t really understand was why only 2% of the population identifies as Christian. It has been around in Japan since the mid-1500s (almost 500 years!) and I knew that there were incidents like the 26 Martyrs, but that had happened 1597! What happened between then and now for Christianity’s growth to be so stunted in Japan? I took to the books, Internet searches and articles, and as it turns out, Japan’s history with Christianity is far darker than I realized.

It all started out happily enough. After Portuguese traders, Antonio de Mota and Francisco Zeimoto, accidentally discovered Japan’s shores in 1543, the first Christian missionaries sailed from Portugal to Japan in 1549 and began working. Spearheading the effort was Francis Xavier, a Jesuit monk. Though evangelizing the Japanese people was the main goal, the Portuguese were keenly aware that establishing Christianity in Japan could help expand their trading territory further, and with that, the race to convert (and earn money) was on.

Unfortunately, initial efforts weren’t one hundred percent successful. In addition to the language barrier, missionaries had a hard time explaining Christianity to the Japanese, who questioned how a God who created everything, including evil, could be good. Most were indifferent, and tolerated the missionaries at best. Oda Nobunaga, the most powerful warlord at the time, supported their activities, but never converted nor pushed policies to further their work. Still, the missionaries managed to catch the attention of powerful people who wanted in on the trade and commerce they brought.

Shrewd shoguns (military dictators) gave some missionaries license to practice and teach in their territories in exchange for access to foreign goods, like silk and porcelain. Japanese people were seriously craving Chinese goods because China had stopped trading with Japan after pirate attacks, and Portuguese missionaries took the opportunity to motivate people to convert. Some daimyos (feudal lords) even voluntarily converted so Portuguese traders would be more willing to trade with them. Seeing Portugal’s success, Spain eventually joined in too, sending over Franciscan monks to Japan. Slowly, but steadily, the Christian movement spread across Kyushu and Western Japan, reaching around 200,000 members by 1582.

Alas, missionaries’ progress slowed down when Japan was reunified under Toyotomi Hideyoshi, who feared the growing influence of foreigners in Japan. Hideyoshi’s suspiscions weren’t exactly unwarranted, either; much to his horror, Hideyoshi discovered that the Portuguese were purchasing Japanese people for the slave trade, and found foreigners’ disdain for Buddhist traditions troubling. Things came to a head after the San Felipe incident of 1596, when the Spanish trade ship, the San Felipe, crashed into Shikoku and was ransacked by the daimyo of the area.

Up to this point, Hideyoshi had tolerated Christians, albeit with some side-eye, but to maintain diplomatic relations stable with Spain, Hideyoshi sent a representative to speak with the sailors of the San Felipe. The following meeting proved to be a disaster, however, and the representative reported back what he understood from their conversation: that the influx of Christian missionaries in Japan was, in fact, phase one of a bigger plan to conquer Japan as a Spanish colony, and if all went to plan, Spain would be sending in conquistadors to finish the job.

Though it’s up for debate whether or not this plan was real, Hideyoshi was furious, and fearing loss of his power, he quickly issued an edict to remove all Christians from Japan swiftly. To discourage further converts, the warlord ordered the torture and execution of 26 Catholics, later known as the 26 Martyrs of Japan (remember them?). Unfortunately, their deaths were just the beginning, and over the next few decades, more than 200 Christians were executed, with many others persecuted for their faith.

Things went from bad to worse in 1637, under Tokugawa Ieyasu’s reign, when 16-year-old(!) Amakusa Shiro led the Shimabara Rebellion against the current rulers. Many of the rebels, including Shiro, were Catholic, and had originally joined forces to fight against strict Christian persecution. The rebellion’s eventual failure, however, caused the deaths of an estimated 37,000 insurgents and instigated an even more serious crackdown on Christian activities. Those suspected of practicing Christianity were captured and could be tortured until they denounced the religion, or even executed.

One interrogation method was using a fumi-e (literally ‘stepping picture’). Authorities would order suspects to step on fumi-es, which were metal plates with pictures of Jesus Christ or the Virgin Mary on them. Those who refused to step on them would then be branded as Christians and be forced to recant their faith or else be tortured or executed. Countless others had land confiscated or were reduced to utter poverty, and the rampant persecution forced Christians to go into hiding, thus beginning the era of the kakure kirishitan, or “hidden Christians” who practiced their faith in secrecy.

These hidden Christians took great, ingenious lengths to disguise their religion. Besides physically hiding their activities, they disguised anything to do with Christianity; holy iconography was hidden in statues of the Buddha and his disciples, Latin prayers were changed to sound more like Buddhist chants, and all printed word was eliminated, with followers resorting to orally reciting the scripture instead. Christianity became a tradition that was passed down generations, and this system continued until the Christianity ban was finally lifted during the Meiji Era.

Of course, the road to religious freedom was not a fast one. It all started with America making trade agreements with Japan. As the number of foreigners began to increase, Japan and America passed the Treaty of Amity & Commerce in 1858, which only allowed Americans to practice their religion and establish places of worship. Around this time, the practice of using fumi-e to out Christians was abolished as well. Although they weren’t allowed to spread the religion, Christian clergymen began to pour into Japan, and 15 years later, in 1873, Japanese people were granted religious freedom, too. This didn’t mean Japanese Christians weren’t persecuted anymore, however. Christians were still considered a liability to the government, and politicians were concerned that Christians would be difficult to control or subdue. Even more damning was that many Christians did not recognize the divinity of the Emperor, and as the country began to colonize Asia, one of the opposing groups was, you guessed it, Christians! As nationalism started sweeping up Japan, Christians became seen as more and more of a disgrace to society. In other words, Japanese Christians were still very much considered ‘the other’ in their own country, but it would only get worse when Japan entered World War II.

Like with colonization, Japanese Christians were strongly against the war, much to the ire of more patriotic neighbors. Accounts of Christians receiving less rations or even being taken away by special forces are ample, and it wasn’t much better in the army, either; Christian soldiers were blacklisted if they were discovered, and labelled as a risk to the regime. Those who disobeyed orders because of their faith were severely punished or tortured.

The shift towards acceptance began once Japan surrendered and, more importantly, the Emperor renounced his divinity, a huge blow to national pride. Post-war Japan was a difficult landscape to navigate, and under General MacArthur’s project to suppress Japanese nationalism, Japan’s entire identity was changed or reevaluated. Traditions and values people had maintained for generations meant nothing when faced with hunger and violence in this new, unfamiliar environment that was once their home. Many turned to religion for solace, and with the large presence of foreigners, Christianity started to become a more widely accepted religion.

In my interview, I was told that many Japanese people saw Christians as too moralistic, uncompromising, and soft. However, through my research for this article, I realized that, actually, Christians have been seen as rebels, insurgents, and in some ways, revolutionaries. They chose to embrace the unfamiliar over traditional Japanese values, and when they were ordered to disconnect from the foreign influence of the religion, they disobeyed and tried to preserve their faith as much as possible. For a country like Japan, whose people pride themselves in maintaining traditions for decades or even centuries, what the early Christians did was absolutely radical. There are many, many valid problems with organized religion, and I myself don’t identify as Christian anymore despite my upbringing, but I am awed by the sheer perseverance of the Japanese Christians.

If you would like to learn more about Japanese Christians, you can find historically significant sights in Kyushu, like Oura Cathedral in Nagasaki, the oldest standing church in Japan. There are also several remote areas around Kyushu where kakure Christians practiced their faith in defiance of authority, such as Hirado island or the Goto islands.

Even though Christianity may never truly be a major religion in Japan, I hope and pray that the country’s promise to grant religious freedom to everyone, citizens and foreigners, will never be broken. Amen.

Erica is currently working as an ALT in Kyotanabe City, Kyoto Prefecture. Her main interests are Japanese traditional culture, going to art museums, and chatting with new people (preferably over a tumbler of Laphroaig). When she’s not doodling or daydreaming about finally getting tickets to a Takarazuka performance, she’s trying to hunt down 80s city pop records.

email
Community, From the MagazineChristianity