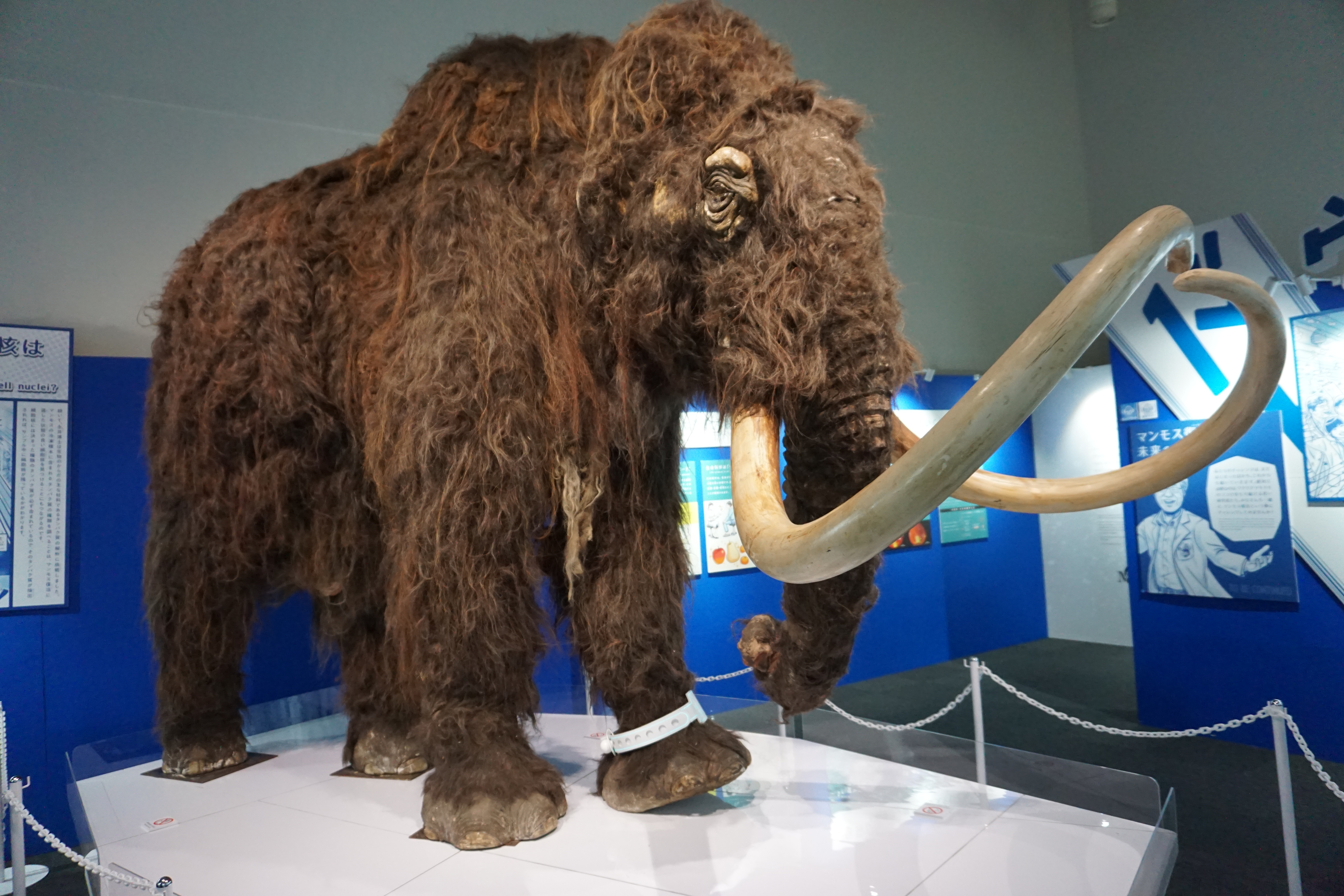 For many of us, this phrase brings images of cavemen battling sabertooth tigers, giant mammoths, or even the tragic romance between a squirrel and his poor acorn. Relics like bones, spears, and cave paintings are a testament to the difficulties of humanity’s not so distant past. However fascinating, most of this history is as dry and stale as the bones in a local museum.

On a recent trip to Hakata Station in Fukuoka City, I noticed an advertisement for an unusual exhibit. The local science museum had announced a special Ice Age display presented by a team of Russian and Japanese scientists. It’s unusual enough to see traveling displays of this nature, so I decided to take a look.

Upon entering the museum, I was confronted with numerous Ice Age posters and the imposing skeleton of a real-life woolly mammoth. Interesting, but not unlike what you might find in the Smithsonian or various other national museums.

However, it was not the mammoth bones that caught my eye, but the small and unassuming box to the side carefully guarded by a staff member. To my surprise, it contained genuine mammoth hair. What truly blew me away, however, was that visitors were allowed to reach into the case and handle the contents! It’s one thing to touch the fossilized bones of ancient animals, but it’s a truly wondrous and eerie experience to handle the actual fur and hair of an animal dead for nearly 20,000 years. I ventured further into the room and was met with displays with more mammoth hair, dung, and even massive molar teeth. The following room also displayed the skeleton of a woolly rhinoceros, another large and unusual herbivore from the arctic reaches of the north. Various articles written in English and Japanese detailed the origins of such creatures and how they spread around the world. Then, I saw the black curtains.

Drawing them back, I was met with something truly wondrous.

There, carefully encased in a series of cryogenic displays, were the actual biological remains of various Ice Age animals. Not the sterile bones of a museum display, but the flesh, skin, hair, and even entire bodies of animals extinct for tens of thousands of years. It was, needless to say, an incredible experience.

Some of the preserved animals were fairly minor. One was a ptarmigan, a small bird akin to a grouse or chicken that still exists to this day. It was easily the youngest specimen at a mere 2000 years old and was a mummified mixture of feathers and bone.

Others, however, were far more exotic. One case contained a fuzzy wolf cub that had been smothered by a collapsed tunnel and was almost perfectly preserved in the Russian permafrost.

One of the creepier recoveries was an entire persevered Steppe bison that had evidently died in its sleep. While the body didn’t look too different from that of a cow, it had a ghastly death grin. I found it remarkable that such a massive body had been recovered intact.

Even more fascinating still was the preserved body of an extinct Lena horse foal. The animal had the misfortune of falling into a mud trap . . . but the fortune of being recovered by chance during an expedition in Russia. Evidently, with the warming of the Arctic regions some sinkholes have formed and released the previously unknown bodies of ancient animals locked meters below the surface.

Mammoth body parts were, of course, a specialty of the exhibition. The severed but preserved trunk of one mammoth was curled in a display and looked remarkably like a modern elephant’s trunk. Another tank contained a mammoth hide that had been discovered separated in the ice.

However, the final section was the most shocking of all. The last cryotank was stored in a small area that completely restricted photography. Inside the tank was the pride of the exhibition: the preserved head of a mammoth. While the head wasn’t in perfect shape, much of the flesh and hair was still intact, giving an idea as to what the creature once looked like, as well as it’s gargantuan size.

Needless to say, it was a spooky, but fascinating experience to see these tangible Ice Age ghosts. While bones, drawings, and other artifacts can stir the imagination of what life may have been like in the past, the opportunity to witness the real flesh and bodies of ancient animals is truly special. In the late nineties, my imagination had been captured by the discovery of the frozen Jarkov Mammoth. I had always wanted to see something like that in the flesh, and I finally got the opportunity.

As I left the museum, I realized the value of the experience. Not only did it teach me about the Ice Age, but it gave me the rare gift of witnessing and interacting with extinct animals. If you get the opportunity, I highly recommend visiting the exhibition while it is still in Japan.

Mark is a first-year high school ALT in Fukuoka hailing from Snohomish, Washington. Outside of teaching and the adventure of being an ALT, he enjoys cosplay, alpine mountaineering, and nature photography.