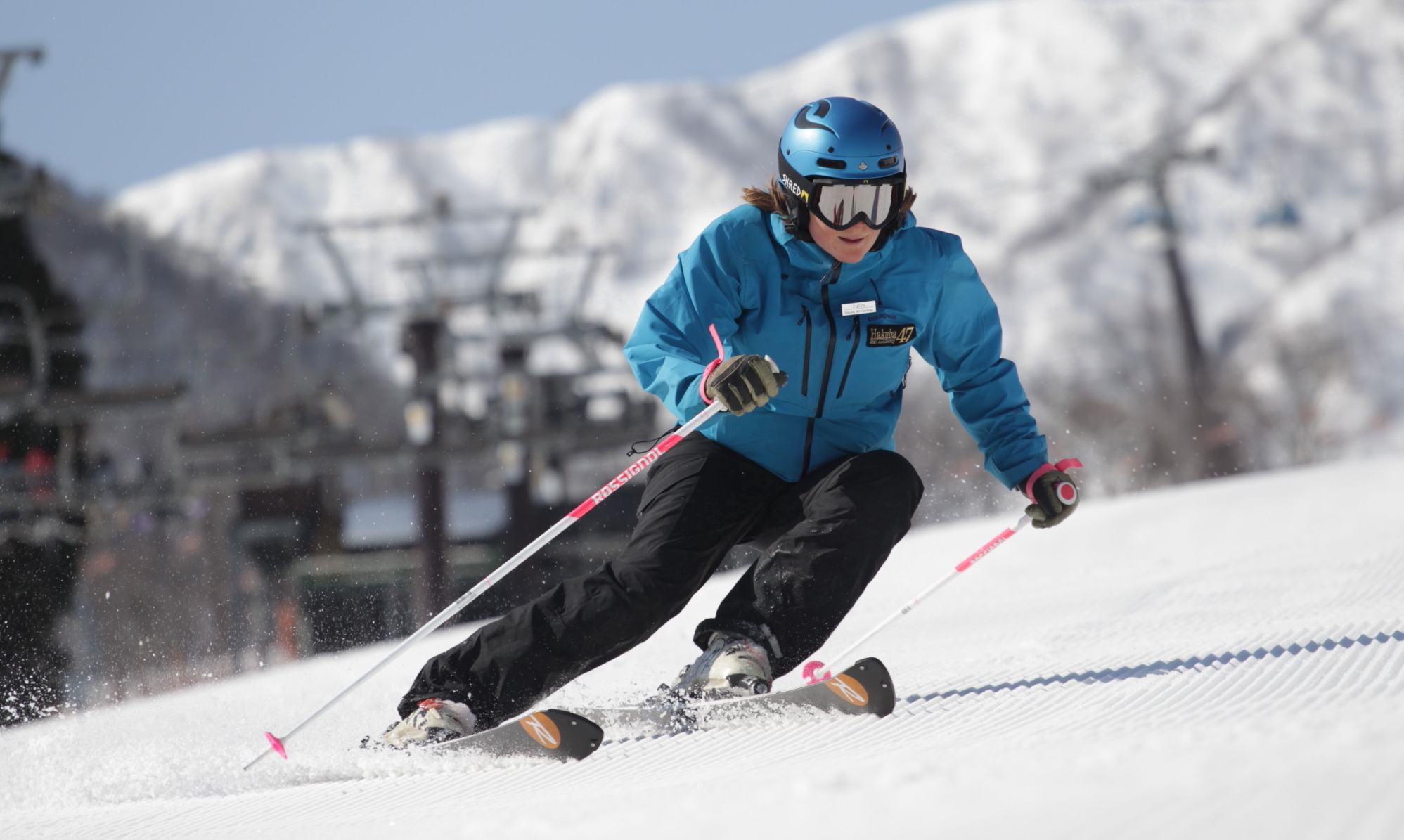 Years ago, I embarked on a journey that took me to Japan as a 20-year-old on a working holiday visa and brought me to where I am now—with a life and business in Nagano Prefecture through snow sports.

I came to the country in 2010 as a ski instructor, with the intention of working one ski season before returning to the UK and launching into a more conventional career path. I did not know that it was possible to find a home—and indeed a life—in Japan via the ski industry. I believed that English teaching or being a skilled professional were the only avenues, but neither felt right for me. I had dismissed the idea of my time in Japan being anything more than one winter. While I had always held a lifelong dream of living in the snow, I had reconciled that making a living from sport—especially in a foreign country—was overambitious at best. A decade, a husband, two children and a ski school business has shown me that our passions do not always have to give way to our work, and that as regimented as Japan is, there is an awful lot of opportunity here.

My attraction to Japan—and specifically Hakuba—stemmed from the whispers of bottomless powder snow and an abundance of ski resorts that permeated every ski school locker room around the world. It was not long before curiosity got the better of me, and like many others, I decided to see for myself. Having worked as a ski instructor in Canada, Austria, and the UK, securing employment as an instructor in one of Hakuba’s ski schools made sense. The rumours of lots of snow were founded, and for such a foreign country, I strangely felt at home. 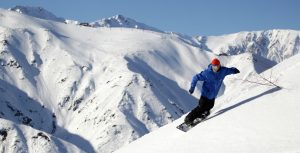 Following the 2011 Tohoku earthquake and tsunami, that first season ended abruptly, and left a lingering sense of unfinished business and sadness for Japan. When the opportunity arose to return to instruct again the following winter and to work as an outdoor guide in the summer, it was too appealing to turn down. Living in rural Japan year-round with my (now) Canadian husband was freeing, fun and abundant in sporting opportunities. As with anywhere in the world, there were significant cultural barriers that I have still not fully grasped—and likely never will—but in a mountain town such as Hakuba, a mutual love and respect of immersion in the mountains seemed to transcend many of these barriers. I did my best to fit in where I could, didn’t take it personally where I could not, and began to build a life with skiing and outdoor recreation at the forefront. 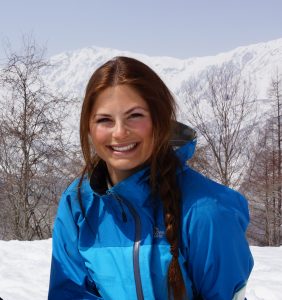 That said, life as a western woman in a male-dominated industry in rural Japan has not always been smooth sailing. Over the course of five years, it felt as though both my gender and age brought challenges in the workplace, and it was a tiring battle to find both my voice and worth in that environment. Fitting into neither the “mother” or “office worker” category, I seemed to be an anomaly and understood that despite all the time I spent trying to fit into the structure of the company, I might not reach my full potential. I realised too that I might have to build my own framework if I wanted to remain in the outdoor tourism industry and make it a serious career. It seemed like a good time to step back, recalibrate and have our first baby.

When I look at the ski industry as a whole, I see a real shortage of veteran instructors—those that have somehow managed to sustain themselves on their passion, and not give into the external pressures to “grow out of it” or move on to something “proper.” Unfortunately, it has become a stigma that instructing is a gap-year job—and this is reality in more cases than not. If we can promote more career instructors, it is to everyone’s advantage as they are the best ambassadors of the sport.

Even less common than career instructors are female career instructors. Already a male-dominated profession with women being outnumbered significantly in most ski schools globally, a rare few stay with the sport and work their way to the top of the instructing levels. Interestingly, most ski holidays and any corresponding lessons are organised and booked by women, and the bulk of participants in those lessons are women and children. So while women largely feed and sustain the ski industry, few actually lead it.

With those observations in mind, I wanted to create something that was conducive towards veteran instructors continuing their passion, and at the same time provide the very best experience to visitors of Hakuba by retaining excellent instructors. Aware of the imbalance between men and women, attention to detail would always be duly given throughout the booking process to ensure that the best match was made between guest and instructor, and having a balanced team of men and women would be key in doing this. One contributing factor to the lack of female career instructors is child-raising, so flexibility and autonomy for the instructors is also necessary. As Japan is utterly unique in culture and language, our instructors provide insight and guidance in navigating Japanese culture, whilst intimately knowing every slope, powder stash, onsen and restaurant in order to deliver the best experience. 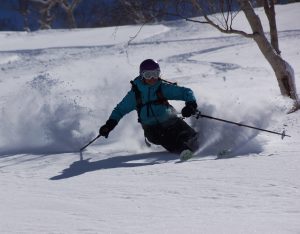 With a vision in sight, I went to work, making connections with the local resorts in a bid to get permission to operate a full service ski school that would focus on the private experience, include complimentary transportation and be fully customised to the guest’s needs and preferences. My first choice—Hakuba47 Winter Sports Park—took some time to consider my business proposal before giving me the go-ahead. It was a leap of faith on their part, but I was fortunate I had the backing of a female colleague within their own ski school as well as numerous character references. With a newborn baby, a second on the way and new business, my vision began to take shape.

Navigating business in Japan of course had its hurdles, and lessons were often learnt the hard way. One in particular was acknowledging that I was in Japan and not England, and to stop comparing every system and process to its western equivalent; to love Japan for Japan. Another was to accept that there would be lots about this culture and society that I will never understand, but to be unendingly grateful for the opportunity that this often insular and male-dominated society has given me—a young western female.

Four years later, Hakuba Ski Concierge has gone from one instructor to ten—mostly, local residents with a long history in the valley and extensive experience in the snow sports industry (in addition to half of us being parents ourselves). 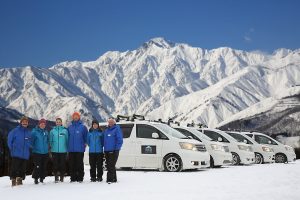 As a village and resort, Hakuba has seen enormous changes over the last decade, becoming increasingly popular on the global ski map. More North Americans are being drawn by the “Epic Pass,” Scandinavians by the backcountry terrain. Australians view it as an economical ski holiday when compared to resorts Down Under. Most recently, the Chinese market has begun emerging. While people from Thailand, Malaysia and India do visit, guests from Singapore, Hong Kong and mainland China are leading the most recent market surge—and will most likely carry the industry through more challenging times. With the winters being affected by climate change, more of the season is lost to inconsistent conditions and as a result, many Westerners may condense their visits into peak times—when the odds of powder snow are more in their favour.

By contrast, for many Chinese visitors, the draw has never been the powder snow, but rather the lure of foreign ski culture. While most Europeans and North Americans are no strangers to the world of skiing, to the average Singaporean, ski equipment is quite foreign, and therefore a new level of service is needed to assist these guests in navigating this. Snow sports should be accessible to as many people as possible, not just the already athletic. And I suspect over the next few decades, this emerging market will be at the forefront of it.

I believe that for many the perception of Japan is that of an insular country, resistant to change and one that unquestionably follows long established rules and norms. While this may have gravity in parts, a decade in Hakuba has proved quite the opposite to be true. A modest mountain community comprised of third-generation ski instructors who turn into rice farmers when the snow melts, cultural norms have been turned upside down and years of routine practises are shifting with the winds of change. In part, I believe it is an adaptation of this region’s evolution, but more so I feel it is in recognition of our desire to share a life in these beautiful mountains—and their incredible grace in making space for us to do so.

I hope to see Hakuba Ski Concierge continue to thrive and meet the growing demand for high-end private lessons. I hope too that it will continue to provide stable employment for our instructors and enable them to continue in a profession that they are passionate about.

I did not expect to find my office in the mountains of Hakuba, Japan. Yet in doing so, I have unintentionally stumbled upon my home.

Nadine Robb is the owner and an instructor at Hakuba Ski Concierge. Originally from the UK (and having spent time in Austria and Canada previously), she has lived in Japan for ten years now. Author of the children’s book Joey’s First Ski Lesson, Nadine is also a professional ski and snowboard instructor, wilderness first responder, swift water rescue technician and mother of two.

email
From the Magazine, Lifestyle, Sportsinstructorski