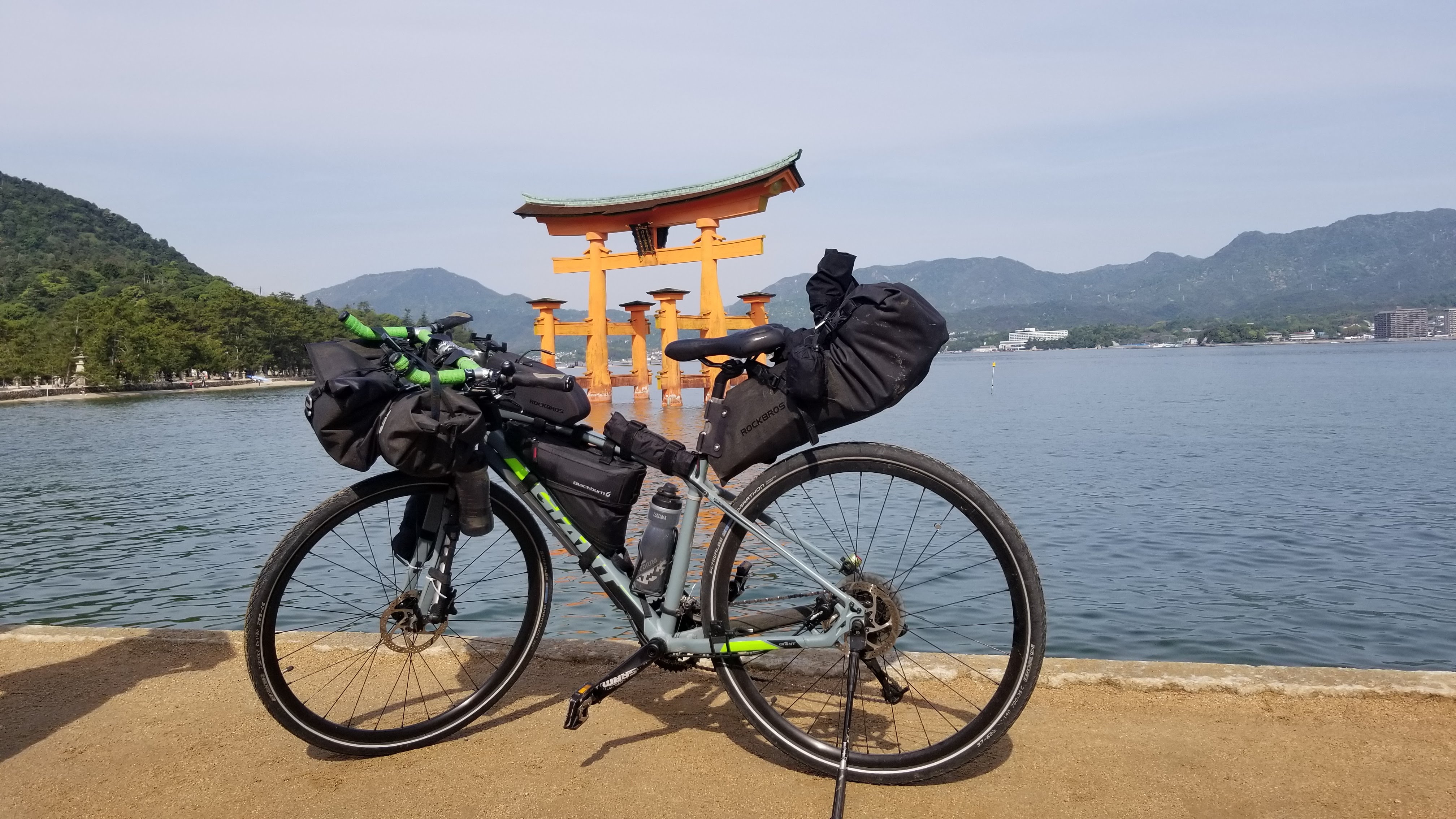 Learn by doing. This bit of wisdom led to my many, almost impromptu, stupidly dangerous solo adventures—and I don’t regret them at all. I’ve ridden across the United States on a motorcycle, toured the Kanto Region of Japan on a dirt bike, and have now cycled almost half the length of Japan—all solo with barely any serious riding experience. I did my first motorcycle tour with only a month of riding experience and a 24-year-old bike, and my first bicycle tour was done with fewer than 5 hours of serious planning and packing. Now I can call myself an experienced biker with many miles of two-wheeled touring under my belt.

You may be an experienced cyclist looking for some insight into cycle-touring in Japan or a fitness enthusiast curious about how I got my body to crank out 100 kilometers per day on a plush gravel bike. Or you may just be eager to vicariously experience a journey through my pen. Regardless, the best advice I can give you is put down the phone, close your laptop, get on your bike, and learn by doing.

This article is about my first-ever bicycle tour from Nara to Hiroshima. I used this tour as a proof-of-concept for my crazy idea to cycle half the length of Japan in twenty days. Over the course of this journey, I learned a lot about the ins and outs of navigating Japan on two wheels.

In April of 2019, I was preparing for another crazy Golden Week adventure. During Golden Week of 2018, I did a motorcycle tour of Gunma, Niigata, Ishikawa, Nagano, Toyama, and Gifu but due to a few complications involving blind intersections, my steed was cruelly ripped from my hands. I was uninjured, but I was left without a motorcycle for Golden Week.

However, I didn’t let that, an expired international driver’s licence or a lack of funds keep me from my two-wheeled adventures. Two weeks before Golden Week of 2019, with a little help from Craigslist and Paypal, I bought a used Giant Toughroad from an Australian who had left it in Japan after touring Hokkaido. At the time, the thought of bringing it back to the land of its maiden voyage was still a pipe dream, so I wanted to see if I could survive a week on this bike before I committed to a month.

My first tour on two wheels was a crazy two-month freedom-fueled post-graduation adventure from upstate New York to San Francisco via Charleston, South Carolina and Big Bend, Texas—but that was on an enormous 1100 cc behemoth that weighed four times more than I did and could reach 0-60 MPH in about three seconds—the antithesis of my new-to-me bicycle which I stuffed in a bag, slung over my shoulder, and brought back to Gunma on the Ryomo Line.

Packing my for my first bicycle tour was also quite different than what I was used to. While I am used to cramming things into saddlebags and backpacks, every extra gram that I packed would be another extra gram I would be lugging up mountain passes, including Japan’s steepest national road, Kuragari Pass (Nara to Osaka). I decided to use “bikepacking bags” for this tour: a handlebar bag, top tube bag, frame bag, and saddle/seat bag. While this kept my luggage streamlined and aerodynamic, packing space was an issue—I couldn’t bring many extra layers of clothing (fortunately, it was already quite warm) and I had no good way of carrying the bags off of the bike to enter accommodations or ride the train, which I quickly and painfully learned hauling the bike and its bags onto a shinkansen from Tokyo Station. After a series of transfers, made even more difficult by a heavy bike bag and luggage, I decided to sleep at a hostel in Nara I found on Google Maps earlier that day and prepare for my first big tour.

I spent six days riding from Nara to Hiroshima, during which I took five ferries and two trains (not including the shinkansen that got me to and from western Japan). I used a combination of Komoot (a popular route-planning app) and Google Maps to plan my routes but lacking experience in bicycle touring, I didn’t know enough to avoid my first obstacle—the Kuragari Pass.

After running into deer in Nara Park and passing by the Heijo Palace remains, I headed west for Osaka and Kobe—but Komoot sent me up this devil of a touge (mountain pass) that I had never heard of. It was a gorgeous route—I was surrounded by farms and coffee houses—but even with gears designed for touring and climbing, I wasn’t able to pedal a single meter. Of course, now that I’m more in shape and have a larger rear cog, I could probably manage at least half or 3/4 of the pass—but at the time, I had to swallow my pride and walk the whole thing. The descent wasn’t enjoyable either; with a 30% grade at the top, I was dragging my brakes the entire time. The second obstacle came in the form of rain; I realized that I had forgotten my rain pants at home. Not wanting to cycle in wet shorts, I stopped by a Don Quijote in Osaka to grab a pair of cheap rain pants that weren’t entirely waterproof or breathable, but did its job. Then, I continued to Kobe.

I didn’t want to wait in the ridiculous queues for Kobe beef, but I found some excellent roast beef donburi at a small restaurant in downtown Kobe. My favourite part about cycling is definitely how hungry and tired I get afterward—there’s nothing like filling your stomach and getting a nice deep sleep after a long day in the saddle. And at the Asahi Sauna and Capsule Hotel I stayed at that night, I experienced the joy of taking a nice long bath after riding through the rain and the soundest sleep I’d gotten in a long time.

The next stop was the Seto Inland Sea, or more specifically, Shodoshima. While seemingly the main attraction at the time was the Art Trienniale, I enjoyed cycling the mountains above the coastline, exploring eerily deserted roads, shrines inside caves, and the absence of people. After taking a ferry to Shikoku, I took a train over to Imabari where I started the highlight of my trip—the Shimanami Kaido.

The Shimanami Kaido is a chain of bicycle paths and bridges that connect the six main islands in the Seto Inland Sea. In typical Khanh fashion, I only researched the route on my phone hours before deciding to ride it, having forgone proper planning at the beginning of my trip.

But despite the rather spontaneous nature of this jaunt (or maybe because of it), I still had some of the best fun I’ve ever had on two wheels. The Shimanami Kaido’s tall bridges naturally present steep climbs, but the entire island chain has special cycling infrastructure which make riding this route a breeze. There are painted paths around the islands which lead riders around two routes: a shorter, more direct route and a meandering beachside route around the archipelago. Leading to the bridges, there are bike-only slopes that carve curves into the bridgeside mountains that make for easy climbs and twisty, exhilarating descents.

However, while the sweeping ocean views from these bridges and cliffs were unforgettable, it was not a sight but rather a person that left the greatest impression on me during this seaside adventure.

I had met a foreign exchange student from Italy studying at a university in Kyoto the night before I partook on my two-day Shimanami Kaido adventure, and we decided to ride together for a day. Both of us were touring, and had all of our sleeping gear and luggage on our bikes. However, while I was riding a well-maintained sports bicycle with clipless pedals and all the bells and whistles for comfortable touring, this young man was riding a single-speed mamachari. He had bought his bicycle for his Kyoto to Hiroshima journey, self-supported by cheap camping gear from Amazon and food from grocery stores. His equipment did not hold him back at all, as he was keeping up with me on both ascents and traverses. His resolve and personal energy inspired my future tours as it reminded me that the equipment does not make the rider.

Parting ways with my Italian friend, I swung by Okunoshima to pet some adorable rabbits and then took a ferry to Okamurajima, where I began my tour of Shimanami Kaido’s quieter, shorter cousin—Tobishima Kaido. The bridge paths were steeper and not a single convenience store was to be found for the roughly 50 kilometers I rode.

But that added to its charm and beauty. Quiet oceanside fishing villages melted into mountainside mikan farms as I pedaled along the coastline (I bought a kilogram of mikan from an unmanned roadside stand for 200 yen—an amazing deal for some of the freshest clementines I’ve ever tasted). Fewer than a dozen cars passed me during the half-day I cycled this road while a small art festival run by students from Hiroshima University filled the streets in one of the towns.

The remainder of my trip was spent doing touristy things around Hiroshima, including visiting Miyajima and the Atomic Bomb Dome. While in Hiroshima’s Peace Park, I happened to stumble across Hiroshima’s Flower Festival, a gyoza festival, and another cyclist that was going on an even more epic adventure than me: a Kyushu-to-Hokkaido tour. Seeing another foreign face next to a fully-packed bike roused my curiosity, and we quickly became friends. I would later offer him a place to stay at my apartment in Gunma, and tales of his adventures would further inspire my next great journey—more on that in another article!

I will end this article by restating my philosophy: learn by doing. So many of us are paralyzed by fear of the unknown. It’s not due to a lack of travel information—nowadays, anyone can learn so much about a place through a quick Google search. I think we’re afraid of not knowing our physical limits: “Can I really cycle this far?” “Gee, that’s a really big mountain . . .” “I don’t know if I can sleep outside . . .”

Thoughts like these are common among inexperienced travelers, and often limits us to the well-beaten path. The best part about adventure is there’s no definite failure. There are no “winners” or “losers.” We as travelers often set goals for ourselves: to bring more meaning to our accomplishments, to push ourselves, and also to learn more about ourselves. Not meeting my targeted daily mileage or summit is always a disappointment, but it also gives me an update on my abilities to better plan my next adventure.

My struggles with equipment and route planning brought less disappointment than it did confidence in my preparation for my next even bigger tour: Gunma to Hokkaido.

Khanh Nguyen is a music teacher at the Gunma Kokusai Academy. When he’s not dancing around a classroom or tooting his saxophone, he enjoys riding two-wheeled vehicles, skiing, and exploring mountains.

All photos provided by Khanh Nguyen