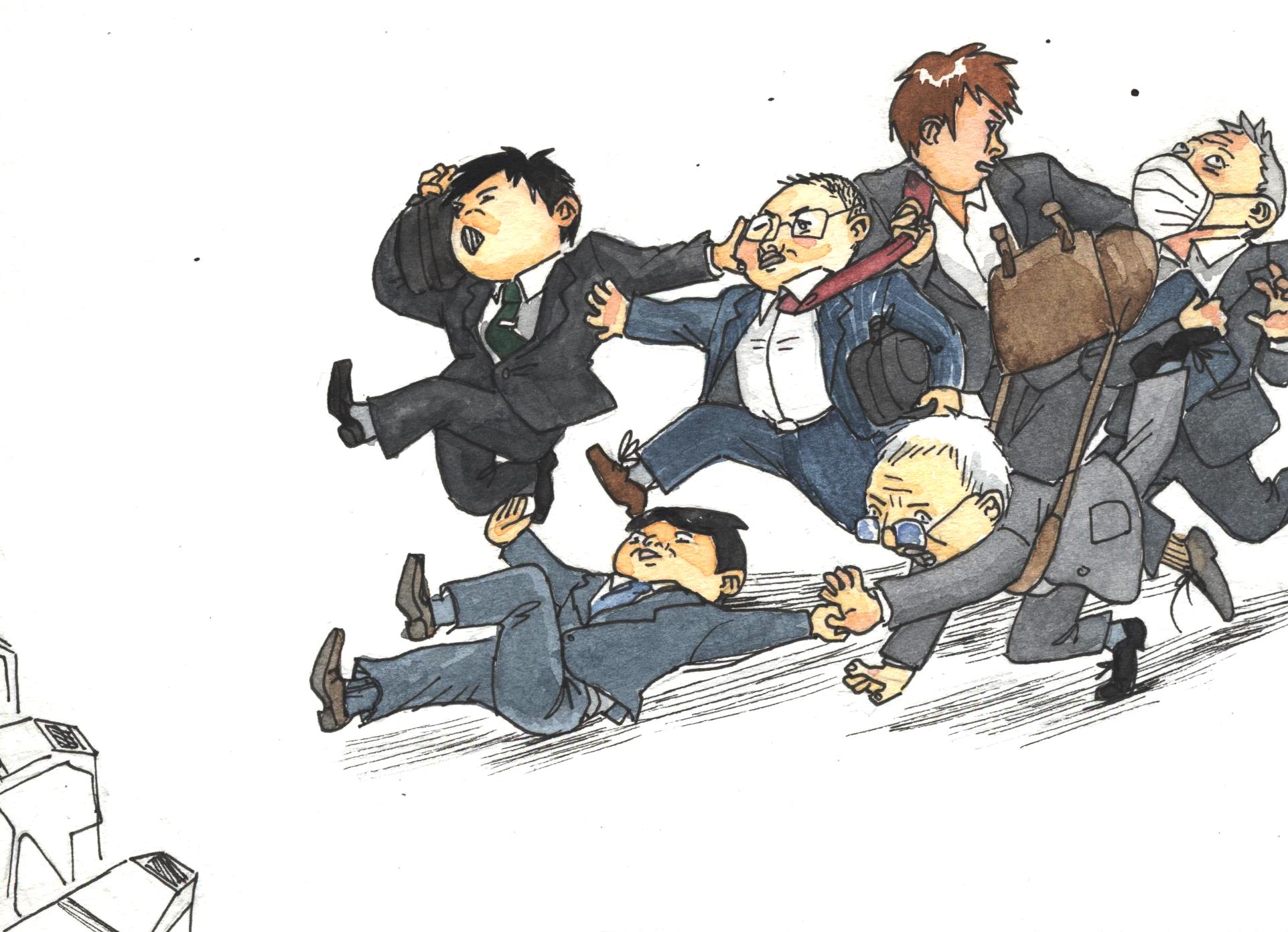 When I moved to Japan for JET, I had reached a bit of a crossroad in terms of my art. It was something that I had neglected over the previous three years, as I trawled through my English Literature undergraduate degree. Drawing and painting—pursuits that I’d dedicated a good portion of my time to when in secondary school—had been shuffled to the sidelines in lieu of Medieval texts and developing something called a “critical practice.” I had a weekly gig as a cartoonist on a university paper, but apart from that, I stopped working on larger artistic projects. Like so many graduates, I wasn’t sure what it was that I wanted to do once I was done with university. There was a perpetual, sneaking feeling that I should have studied fine art. I told myself that I would give myself a year in Japan, and that would be enough to figure my future out.

My JET placement ended up being a city called Koshigaya, located in the southeast of Saitama Prefecture. My stomping ground was the well kept and modern suburbs of Koshigaya Laketown, and my local community largely consisted of commuters who had jobs in Tokyo, which lay about 10km to the south. Given that Saitama is known for being one of the most boring prefectures in Japan, you might not think that I would be inspired by living there, but I was. A so-called “bed town” in Saitama was different enough from London for almost everything to be exciting and new for me.

A lot of what I drew and painted in Japan was me trying to capture moments that I felt were visually interesting. The landscape of the suburbs where I lived had a lot of clean lines and boxy, slightly nondescript buildings that looked like a child’s drawing of a house. I liked these, especially when the weather was good and we got those amazing anime-esque clouds on vibrant blue skies.

What inspired me the most was the people I saw, especially the high schoolers I taught for that year. Many of them were convinced, in the universal way of all teenagers, that there was really nothing cute or cool about themselves. But coming from the UK, where most students wear dark polyester school uniforms, these kids in their sailor suits and military jackets, with surgical masks and (in the case of the baseball players) shaved heads were serving looks. One of the pictures I included is a painting of sports day, an event that looked great, with blue skies, yellow pitches, and the students wearing their P.E. kits under a very stark, bright sun.

I also painted some friends from back home in the UK, Claire and Peter. It wasn’t because I missed them terribly, but because I wanted to practice portraits. Painting them allowed me to revisit specific memories I had had with them. I painted Claire’s portrait on a piece of a box that once contained sneakers bought in Harajuku. Because I didn’t live in a big apartment with a designated space for art, and proper supplies shops were generally far away, I used a lot of old pieces of cardboard as canvases, and acrylic paints from Daiso until I was able to get to Sekaido in Shinjuku and go on a spree.

About halfway through the year, I got my parents to send me my old tablet and I started painting digitally again. I made a small series which I’ve called “people who look cool, but by accident.” The one I included here is of the izakaya “catch” workers; (usually) young guys who hang about on the street and try to drag you into the bar where they work. I also did digital paintings of construction workers and high school baseball players. For these, I usually used referenced images from Google, but I also spent time staring at whoever it was I wanted to draw so I could memorise what they were wearing for later, hopefully in a way that didn’t make them feel uncomfortable.

Making art in Japan for a year helped me to realise where I sit in terms of the art world, which is to say that I consider myself to be an illustrator more than a fine artist now, and I’m happy with that title. I’m also pleased that I was able to share some of the things I saw and experienced with people through my drawings and paintings, most of which I put on Instagram. My sketchbook acted as a diary, and I know that I can revisit the things I did in Japan by looking through it.
Did that year in Japan reveal what I was supposed to be doing with my life? Not really. There’s a quote by the artist, Paul Gardner: “A painting is never finished – it simply stops in interesting places.” I feel like these are good words to make art by, and to some extent, to live by. I’m content with the work I produced in Japan, especially having documented so many of my experiences through it. Before JET, I really expected that I would succeed in that grand plan of figuring it all out, but now I’m just happy that I had the opportunity to have stopped in an interesting place.

Rebecca Guthrie took part in the JET Programme for one year. Placed in Saitama Prefecture, she regularly taught at two schools in the area, both senior high. She is now living in London working as a freelancer within the TV and film industries. You can see more of her art on her Instagram: @_bexbexbex

email
Arts, Culture, From the MagazinedrawingillustrationpaintingSaitama