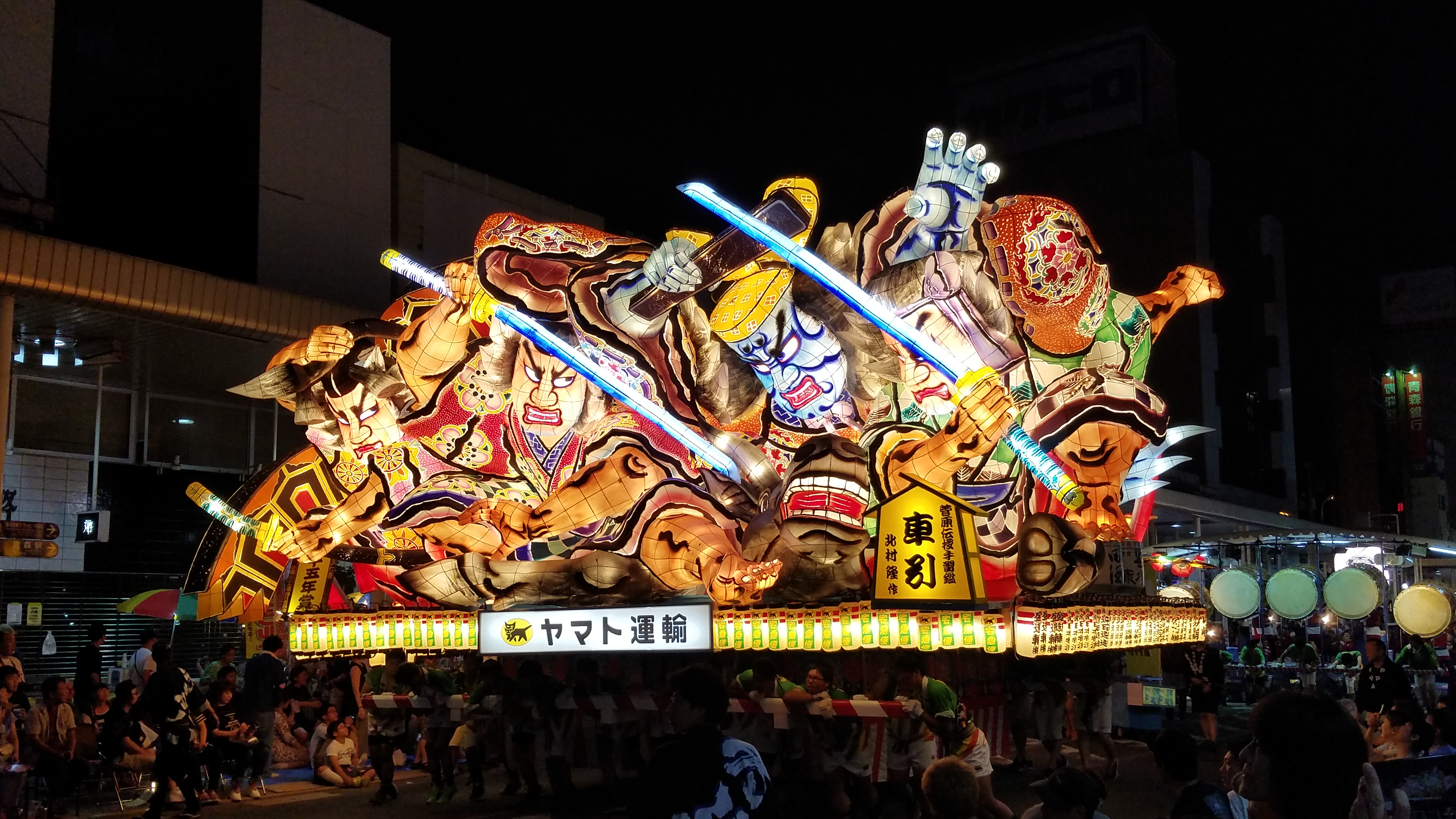 When I came to Japan in 2017, I set out to see every one of its 47 prefectures. As part of that ongoing quest, I took a 2000 km journey through the region of Tohoku this summer. Each of the six prefectures in the region has an amazing and historic summer festival, and I was able to see them all in just six days. Follow me to Japan’s vast north!

Fukushima Prefecture
First up was the Fukushima Waraji Matsuri, in Fukushima City. I set out from Tokyo, and after several hours of travel, arrived in time to join in the climax of the festival: the parade of the waraji. You may ask yourself at this point, “what is a waraji?” Well, it’s a traditional straw sandal. The kind you might have seen an average person wearing as they went about their business a few hundred years ago. But these are no average sandals, not in Fukushima. Instead, the people craft giant versions of these traditional sandals, including a golden version, among others. One giant waraji is several meters long, carried by over a dozen men, and big enough for a man to “surf” it by holding on to the thick sandal tongs.

Seeing that man desperately holding on to the sandal as he was bounced up and down the street was an experience I never thought I’d have, nor is it an image that I will ever forget. After parading the sandals up and down the main avenue, covering the pavement in straw, the giant sandal—the largest waraji in all of Japan—was hoisted up vertically, for everyone to admire. I took a piece of straw as a souvenir, and headed to my hotel to rest up for the trek to the next day’s festival.

Iwate Prefecture
Some 250 km north of Fukushima lies the city of Morioka, home to the Sansa Odori Matsuri. The trip was long, and I even had to stop for a few quick car repairs, but eventually I made it to my lodgings and headed out into the city to see the festival.

There is a legend in these parts about a demon named Rasetsu, who terrorized the castle town of Morioka long ago. The people cried out to the deity Mitsuishi-kami for aid. Hearing their pleas, the deity caught Rasetsu, and forced the demon to pledge never to bother the people again. Rasetsu left his handprint on the rock of Mitsuishi Shrine as proof of his pledge. Thus was born the name Iwate, the rock (岩, iwa) hand (手, te) prefecture.

The people were so overjoyed at these events that they danced in the streets shouting “sansa sansa,” and continue to do so to this day. This is no small dance parade, but a mass of people, young and old, from the city and the surrounding areas, dancing as their ancestors did long ago. After watching the hundreds of dancers parade by, I headed to the nearby castle ruins to look over the city and dine on festival food. Life was good.

Akita Prefecture
Just south of Morioka is Hiraizumi. This wondrous town is home to the relics of an age long since past, wherein a powerful clan built a golden “Kyoto of the North,” and inspired legends of a golden city that would cross continents and inspire adventurers to discover a new world. Finding myself among these ancient sites, I felt a connection to the past, but I also saw the connection from this distant outpost, one end of the silk road, to the age of discovery that followed some centuries later.

However, that was but a pit stop on the way to the prefecture and city of Akita, on Japan’s northwest coast. Famous for its dogs and snow, the prefecture also hosts the unique Kanto Festival. Here, the locals balance giant tiered lanterns on their bodies before a cheering crowd. You can witness the seasoned veterans expertly maneuvering the bamboo poles from their hands to their shoulders, foreheads, and even to their hips, while nearby elementary kids struggle with their miniature sized versions. It sounds so simple, but to witness it in person is to see wizardry at work. It is through sheer skill and talent that the performers make holding 50 kg poles seem effortless, as they move the poles along their bodies and pass them from person to person. This is truly artistry.

Aomori Prefecture
Nearly 200 km north of Akita, I found myself in Aomori, a city at the northern end of Japan’s Honshu island. Summers here are brief, but during the Nebuta Festival, the spirit of the town burns bright. The Nebuta (or Neputa), are giant floats, pushed and pulled by festival goers, made of colorful paper and depicting famous warriors, local legends, old Chinese tales, and more. The creativity and care with which these floats are made is apparent in each one as it passes by. Even though I didn’t know all of the stories, I still marvelled at the lights, the colors, the dragons, and the cherry trees that rolled by.

But you’d be wrong to think that these floats are the only attraction. The people of Aomori dance along the parade route in special costumes, and the chant of “rassera” rings through the air. I found myself shouting this phrase, which is a local dialect version of “irasshaimase,” into the night air for hours, getting caught up in the spirit of the festival. I know I will never forget that night, and neither will you.

Yamagata Prefecture
Before leaving Aomori prefecture, I ventured 70 km south, to the little village of Shingo, which hosts the peculiar site known as the Tomb of Christ. Famous from the visits of many a YouTuber, this place definitely had something special about it. Whether it was the presence of the divine or something else, I’ll leave to you to decide, dear reader.

Nearly 400 km down the road to the south, I finally found myself at my penultimate festival, the Yamagata Hanagasa Matsuri. I had a heck of a time finding lodgings, but once I did, I was able to head out and witness the people of Yamagata dancing. The name Hanagasa comes from the straw hats worn by the festival participants, who come from a variety of different groups such as the JSDF, local schools, and even a hip hop dance group. That last one certainly put a bit of zest into their dancing, showing that even events with ancient roots can evolve and change.

And here’s a plug, if I may, for a certain little Mexican restaurant near the station. Many places in Japan have good Mexican food, but only Muchas has captured the authentic taste so well. Stop in if you have a chance, and bring me some tacos.

Miyagi Prefecture
The last day of our trip began with a trek to Yamadera, the mountain temple of Yamagata. After parking at a friendly shop, I climbed 1000 steps to see a temple hewn into the mountain. The centuries-old buildings cling to the stone, and overlook a gorgeous view. Definitely worthwhile.

After heading out, I soon arrived at nearby Sendai, the biggest city in Tohoku, and a place I will most certainly be seeing again. The last festival on my list was the Tanabata Matsuri, held a month later than most other places in Japan because of their adherence on using Japan’s traditional lunisolar calendar. The decorations of the city were a sight to behold, with giant streamers, long chains of paper cranes, and ornamental balls, among others, saturating the festival areas. It felt like walking through another world.

Wrapping Up
I left Sendai after too brief a stay, and drove four hours back home to Gunma, exhausted, but with a new appreciation for all the people whom I never knew existed, all those who create these amazing events for themselves and their communities.

Japan is a wonderful place full of things to do and sights to see, and every place is special in its own way, so it’s easy to get caught up in the things happening in your own town, but if you venture outside your area, you may just find yourself experiencing something more wonderful than you’d imagined. Every journey I’ve taken has only reinforced my desire to keep traveling, and made me appreciate the opportunity I’ve had to visit so many places. If you happen to see me out there, go ahead and say hello! I’m always happy to meet fellow explorers.

Edward Portillo is a third-year ALT in Gunma prefecture, and is originally from Los Angeles, California. He would not have been able to make this trip without the invaluable support from his friends, who choose to remain anonymous. His hobbies include badminton, video games, and attempting to visit every prefecture in Japan (23 down, 24 to go). This is his third piece for CONNECT and he hopes to keep contributing stories about his journeys in Japan. He has a blog at thisweekinjapan.tumblr.com that he really should update more often.