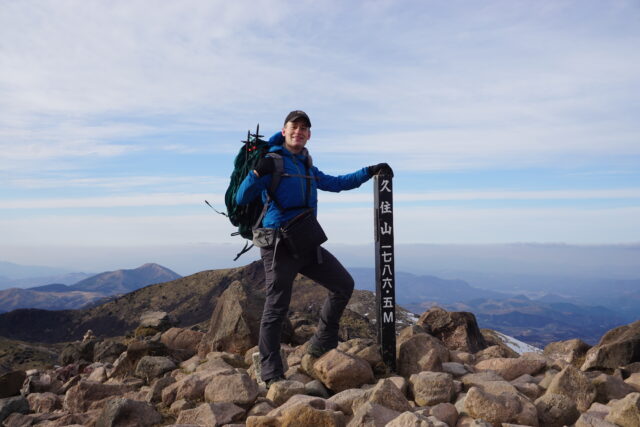 Deep in the heart of the lush island of Kyushu lies a mysterious and wonderful place: the Kuju mountain range. Located on the inner borders of Oita and Kumamoto, it is well out of the way for most nature seekers. Yet, despite this, it remains one of the hidden treasures of southern Japan. 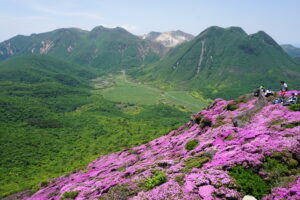 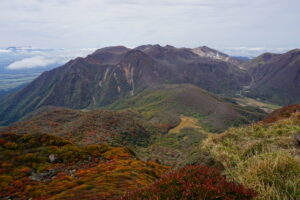 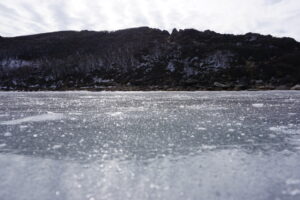 Surrounded by forests and meticulously groomed grass fields, the Kuju range wears many fashions throughout the seasons: In spring, the range is flanked with a skirt of fire as the residents annually revitalize the surrounding grasslands with controlled burns to keep the forests at bay; early summer sees an eruption of the famous Miyama Kirishima, the mountain azaleas, as they crown the peaks in brilliant pink flowers; autumn becomes a patchwork quilt of russet, gold, orange, and gray spread over the shoulders of the mountains; even during winter, when much of the highlands are a dull brown, the mountains wear a veil of white snow crusted with a brilliant ice lake.

This area also has a rich history: In the past, it was home to monks from several temples who visited the mountains on religious pilgrimages dating as far back as a thousand years ago. Later on, people took advantage of the area’s rich array of hot springs and they constructed onsens and a geothermal plant around the mountain. Kuju is most famous, however, for the distinction of being selected as one of Japan’s top mountains by legendary climber Kyuya Fukada, author of the book “100 Famous Japanese Mountains,” a favorite of Emperor Naruhito and the subject of many NHK shows.

When I first learned of my placement in Kyushu on the JET Program, I admit that I was secretly crushed. My favorite hobby, only adopted a few years earlier, was trekking the hills and mountains of the Pacific Northwest. The mountains of Kyushu, it seemed, were much smaller and tamer compared to titans like Fuji and the Japanese Alps. But for me, it wasn’t simply the size. In the alpine meadows of my home, explorers can enjoy a variety of natural features ranging from exotic flowers to ice and snow. My fear was that I’d have to sacrifice that for several years. Still, I made the leap of faith and pushed forward into the unknown.

Rather than conquerors, we are stewards and guests of the mountains.

I couldn’t have been more wrong.

It was during my first October in Japan that I was invited to explore Mount Kuju with one of my teachers. Expecting a boring set of hills and low-lying mountains, I was instead stunned to discover how varied the range was. Despite being fairly isolated and only a few miles long, the range contains peaks over 1,700 meters tall and a number of distinct alpine environments. 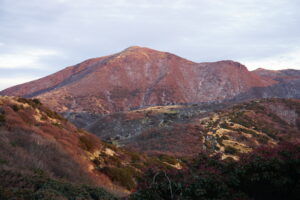 Mount Kuju, rather than a single peak, is actually part of a ring of interconnected mountains with an opening on the northern end and several traversable mountain passes. The journey into these mountains, however, is quite unique. 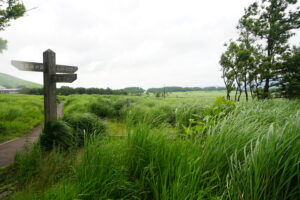 At Chojibaru, one of the most commonly used trails, a large grassy marsh surrounds the base of the mountain. Featuring silvery grasses in the fall and purple irises in the spring, it’s burned annually in order to maintain the artificial meadow. Through this area, a large boardwalk leads hikers a few hundred meters to a dense forest on the flank of the mountain. Once there, hikers ascend a maze of roots, stairs, gullies, and small streams before finally reaching the first overlook. 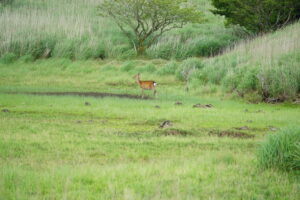 Breaking out into the sun on the upper edge of the forest, hikers are treated to a view of one of the central peaks towering over them. The path continues on, this time cutting through a flooded alpine meadow populated by a number of deer. 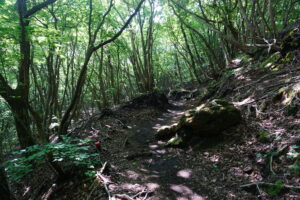 The second forest found after this is sticky with thick, black, volcanic mud and sports smaller oak trees and the classic broad-leaved sasa grass. After continuing to descend through this mess, a cobbled stone path appears, signaling the arrival to the core. 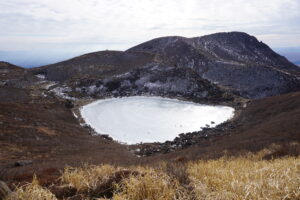 Known as Bogatsuru, this is the central hub of Kuju. It’s one of the largest meadows contained in a near perfect bowl with peaks towering overhead on all sides. Here, hikers can enjoy camping, an onsen, and even a live volcanic vent! 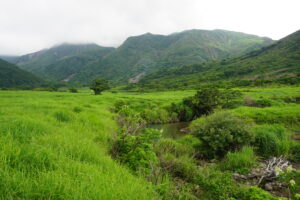 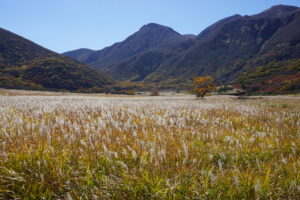 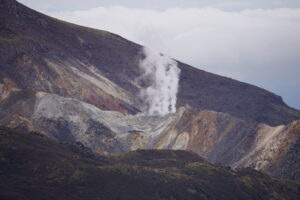 It is in this background, then, that I’ve reflected on what mountains and nature mean to me. Originally, in 2016, I became a climber in order to challenge myself. I chose tall peaks because I wanted to strengthen myself, both physically and mentally, and to improve my confidence.

As I’m sure you can guess, climbing mountains can be hard. I used to push myself to the limit, trying to take pride in attaining once unreachable heights. But I learned that mountains have so much more to offer than a summit or a pretty view. 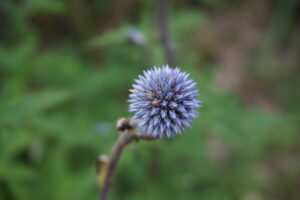 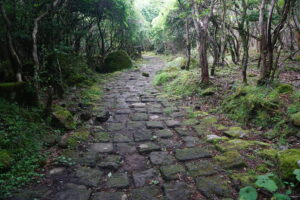 The first thing I discovered was peace. In our busy lives, it can be so easy to have a mind cluttered with stress, worries, and doubts. It can be difficult to pick out what’s important to focus on, and tempting to worry for the sake of worry itself. Mountains challenge this by disconnecting us from the daily grind. Where once I found myself struggling with chaotic worries, climbing became a meditation where I could simply let go and focus on the present. 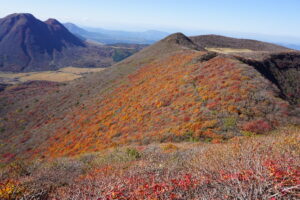 The second thing I discovered, or rather rediscovered, was a connection to nature. In shedding social media, communication, and the constant hustle and bustle, it’s much easier to see and hear the beautiful things you may have ignored. In the Cascades, I realized I had missed a hidden world of glistening white mountains and golden larches on my doorstep. During my climbs at Kuju, I discovered that the assumptions I had made about Japanese mountains in Kyushu were wrong. Where once I only held respect for the tallest peaks, I realized that even lower mountains can still hide incredible secrets and beauty, such as the azaleas I would have never seen back home. 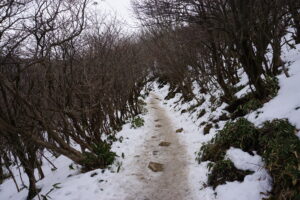 Third, solitude. Loneliness can be hard, but I’ve found that solitude gives me a chance to face myself and to learn how to believe in myself. 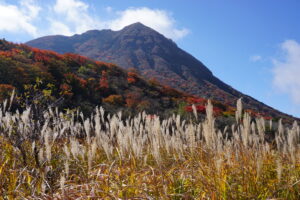 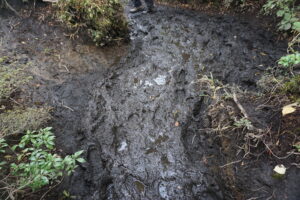 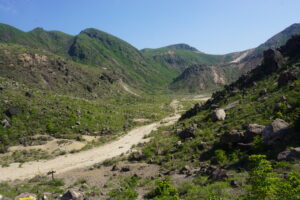 Fourth, strength. Hiking and climbing has the ability to bring out one’s strengths in unexpected ways. Be it rain, wind, darkness, or blisters, every experience forges you into a tougher person. 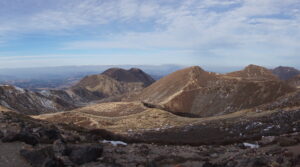 There’s a common misconception that hikers and mountaineers “conquer” mountains. We see images of climbers with flags or banners triumphantly fluttering in the wind. But there’s another perspective as well. Rather than conquerors, we are stewards and guests of the mountains. Many hikers know the power of these places and just how quickly nature can humble the mighty. Humility, I think, is the final gift mountains give to us. 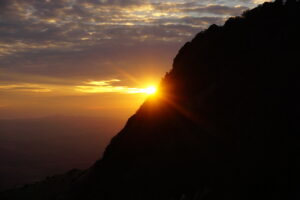 As the famous climber Sir Edmund Hillary once put it, “It is not the mountain we conquer, but ourselves.”

So, now that you’ve read this, how can you begin your own journey? Be it hiking or mountaineering, it can be intimidating, especially if it’s your first foray. But not to worry, because there are some great resources that you can find.

The first, and greatest, resource I’ve found is called the “10 essentials.” This is a list of ten critical items you should consider having when you hike. While some, such as “fire” or “knives,” are less relevant for the Japanese wilderness, other items are much more so. There are several slightly different versions of this list, but, for this instance, I’ll be referencing REI’s list.

When hiking, you want to know where you are and where you are going. Unless you are reasonably familiar with a trail, it’s best to have an idea of where you are going and to stay on that path. It’s not uncommon for hikers to get lost because they didn’t pay attention or follow signs. Bring a map or a picture of a map.

When hiking, it’s absolutely essential to bring a headlamp or flashlight in reserve. If you fall behind schedule and find yourself in darkness, a flashlight can sometimes be the only thing saving you from injuries.

This tip is especially important in winter. Hiking and climbing is a game of temperature control. When hiking, people generate a lot of heat, reducing what they need to wear. However, when people stop for a long break or to deal with snow, rain, or wind, their body temperature drops. In bad conditions and high peaks, this can be dangerous. As such, people should bring extra warm clothes and/or raingear.

Water is by far the most critical resource you need, especially in summer. Be sure to bring at least three bottles of water or fitness drinks, and more in summer.

It doesn’t need to be fancy, but it’s important to have extra food stashed away in your pack in case you are stranded or the excursion takes longer than expected.

During the summer and winter, it’s important to make sure you stock up on sunscreen to protect yourself against sunburn. Alternatively, wear hooded clothing made out of lightweight fabric and pair with a hat. Even on cold, snowy, overcast days, it is possible to become seriously burnt as snow itself can act as a mirror and reflect sunlight.

While not officially on the list, this is also an incredibly important tip to remember. Weather is nothing to joke with on a mountain, be it high or low, and can result in injuries or harm if you are hiking. Always check the weather. Furthermore, if the weather becomes dangerous, don’t hesitate to stop.

As climbers often say, summiting a mountain is optional, returning safely is mandatory! 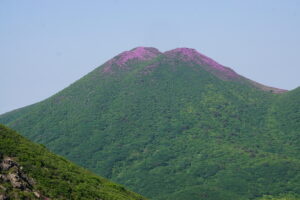 1) You’re planning an all day hike that might turn into an overnight camp. What item would you make sure to pack?

2) Besides packing, what do you do before beginning your hike?

3) How much food do you bring?

4) You somewhat know the area you want to hike. Do you still bring a map?

5) How many bottles of water do you bring?

6) You have room for one extra item. What do you bring?

7) It’s a cold and blustery winter day. What do you make sure to still wear?

8) The weather is worsening on the mountain but your friend wants to continue. What do you do?

8)  3. Head back; the weather can change rapidly on the mountain