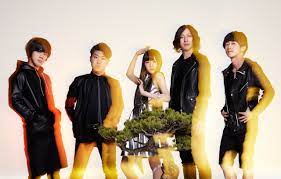 This article originally featured in the February 2022 issue of Connect

On their latest full-length album, Tokyo pop-rock 5 piece PASSPIED bring together generous amounts of danceable beats, rock and roll force, and sugary-sweet pop melodies. These songs are drenched in a nostalgic concoction of sounds from different eras, most notably the ‘70s and ‘80s, but the band re-envisions these influences to create something that is uniquely their own.

The album opens with a burst of energy on “深海前夜” (“Shinkaizenya”), a blend of soundtracks from 2D-era sidescrollers and modern day Mario Kart. High-speed drumming paired with fleet-fingered bass lines keep tension high. “アンダスタンディング” (“Understanding”) turns the energy up another notch. It’s an instant time warp to the 1980s, when crunchy electric guitar and sparkling synthesizers ruled the world. Foot tapping, head bobbing, and even finger pointing at the stage are all game. “ミュージック” (“Music”) gives some room to breathe with a break from the speed at a danceable pace. Natsuki Ogoda’s velvety soft voice synchronizes with keyboardist Haneda Narita on a chorus that’s catchy as hell. 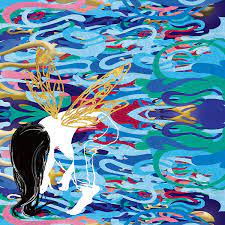 “雨燕” (“Amatsubame”) is possibly the best track on Nui. Narita’s sweeping low-to-high keyboard lick, which appears throughout the song, is a wildly addictive listen. Guitarist Katsuko Misawa’s tin can tone is high-treble and dirty, but feels oddly warm to the ears as he stylishly strums. Every member is in top form and the cohesion is evident. “影たちぬ” (“Kagetachinu”) sees the first dark point of Nui, a somber piano ballad laced with ethereal synths up top and bass sufficiently filling the bottom end. Ogada’s vocals become whispery at times, offering comfort in otherwise unsettling moments. “見世物” (“Misemono”) drifts away from the electric ‘80s pop, going further back in time: 1970s stadium rock. Misawa’s bluesy stylings pair perfectly with Narita’s organ licks. The chorus brims with feelings of power and triumph. “グッド・バイ” (“Goodbye”) is a return to the ‘80s with synths galore, electronic drums, and grooving bass lines from Yoshikuni Tsuyusaki.

“はらりひらり” (“Hararihirari”) is Nui’s weakest song, mainly due to the forced inclusion of a trap beat, something that keeps surfacing in Japanese pop. It’s not all bad, as the chorus saves the song from itself, but the fact remains it feels like filler that could have easily been left out. Nui comes back in full force with “言わなきゃ” (“Iwanakya”), an unexpected turn to alternative rock with some pop punk leanings. Takuya Yao’s drumming on the track marches the band forward without hesitation, and Misawa’s simple, yet satisfying guitar solo towards the end fits perfectly in the mix. “BLUE” takes the edge off with a relaxed, understated hip hop beat and stripped down instrumentals before leading into the final song on Nui. “PLAYER” serves as a phenomenal closer that leaves spirits high, embracing what PASSEPIED does best: danceable, melodic pop rock that inspires feelings of nostalgia, even if it’s the first listen.

You can stream Nui now on Spotify, YouTube Music, and Apple Music.

Ryon Morrin is a 3rd-year ALT based in Shintotsukawa, Hokkaido. In his free time, he enjoys discovering new music, hiking in the mountains, and playing rhythm games at the arcade.