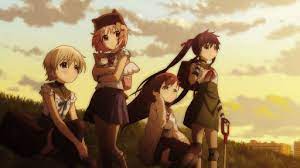 November is here and so is the inevitable Halloween hangover. No more cheesy slashers I say! No more schlocky monster features! After Halloween, horror media generally takes a back seat to the feel-good Christmas season, but if you’re looking for a palette cleanser that features a hint of suffering, I think it’s time you give Gakkou Gurashi! (School Live!) a read. 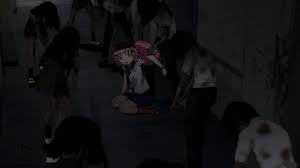 School Live! presents itself as a typical slice-of-life at first, as the reader follows the ongoing activities of the School Life club and its members Takeya Yuki, Ebisuzawa Kurumi, Wakasa Yuuri and staff advisor Sakura Megumi. The initial focal point, Takeya Yuki, is your typical insufferably optimistic protagonist of a high school manga, but it’s quickly revealed in the first chapter that something is incredibly wrong with the world these girls inhabit and how Yuki perceives it. Frames of dilapidated, blood-stained classrooms and corridors contrast to the bright and populated hallways that we see from Yuki’s perspective. 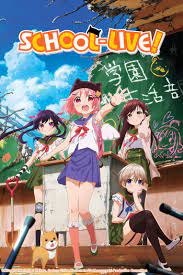 The School Life club live, sleep, and farm food in their high school because at some point in the story’s chronology, the world fell apart due to a zombie apocalypse. Here School Live! sets itself apart from other zombie manga. Where series like Highschool of the Dead or I am a Hero tell their stories with a tongue in cheek humour, focus on dramatic portrayals of societal and mental unravelling, School Live! finds its sweet spot in its portrayal of adolescent innocence. These girls aren’t action heroes ready to improvise weapons at a moment’s notice, they’re just regular kids trying to get by. This is epitomised in School Live!’s “less is more” mentality as it keeps gore to a minimum and excludes shock horror. The commitment to this attitude is also reflected in the portrayal of zombies as little more than shambling silhouettes, which allows the focus to shift from rotting bags of flesh to the more compelling horror of vulnerable members of society in mortal danger. This is invaluable towards immersing readers in the narrative and the characters, allowing readers to grow attached to them.

School Live! is a strong horror manga and a worthy addition to the zombie sub-genre because it embraces all the right properties of this genre. It’s graphic but never gratuitous. Horrifying, but never needlessly disturbing. Perhaps most importantly it shines a light on the human condition, without readers wishing they’d been left in the dark. School Live! is a must-read of any zombie enthusiast and any horror manga fanatic and I cannot recommend it enough for your post-Halloween entertainment.