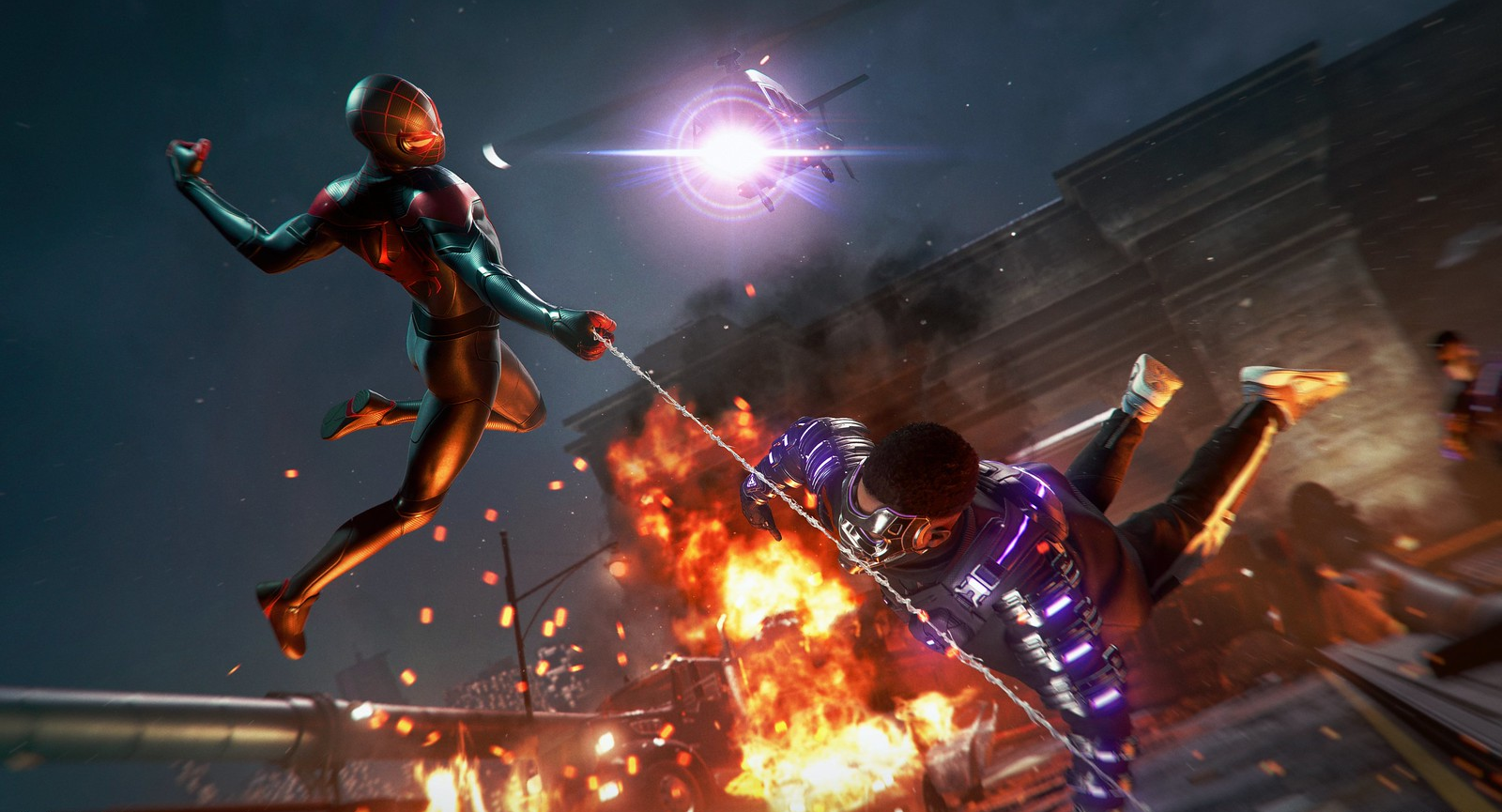 It’s been almost half a year now since the PS5 launched, but there are still relatively few flagship titles for the system. But of the ones that are out there, Spider-Man: Miles Morales is pulling more than its fair share of weight. This action-packed web of characters and drama is absolutely worth your time, money, and attention. 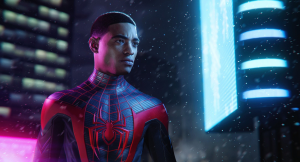 Spider-Man: Miles Morales puts its titular protagonist front and center this time around, and is positioned as a sort of mid-sized interquel between the prior PS4 Spider-Man game and whatever comes next for the series. It’s about half the length of the original and available at a lower price point to match.

This game cribs a lot of gameplay elements from the prior title, but it also makes smart changes and cuts that drastically improve the experience. While the PS4 title got bogged down in distinctly unfun side character sequences, Miles swaps them out for more of the game’s excellent freeform swinging and exhilarating combat encounters.
Family First

While the combat and swinging are better than ever, this game makes the greatest strides over its predecessor with its story. Miles and his family are an absolute delight to witness.

Peter is off on international business, leaving Miles to look after the city solo for the first time. It’s his first big break as the new Spider-Man, but things quickly go sideways. A group of baddies led by someone calling herself The Tinkerer are looking to take down the powerful energy company Roxxon (that is also not exactly on the up and up). Miles finds himself trapped between these two sides, determined to resolve the conflict and end the threat of both.

This game pulls a lot of beats from the critically acclaimed Spider-Man: Into the Spiderverse film and it works phenomenally. The character detail, facial animations, dialog, and voice acting all come together wonderfully for these characters. I was rooting for Miles and his family and friends the whole way through and tracked down every last quest and side mission just to see more of them interacting with each other. 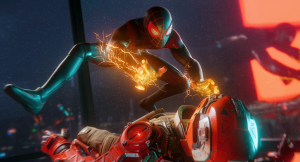 Watch out for Spiders

As for the combat, Miles Morales keeps the fundamentals from its predecessor, but adds in the signature electricity and invisibility powers that make Miles his own (spider) man. The invisibility, in particular, is an excellent addition. In the last title, you could tackle encounters stealthily, but once you were spotted, that was it; you had to fight your way through to the end. Here, you can use Miles’ invisibility to turn things back into a stealth encounter. The result is significantly more dynamic combat sequences that can shift from high action KO’s to stealthy takedowns and back again multiple times in the same fight.

Also new are Miles’ bio-electrical “Venom” powers, which he can use to chain electricity between enemies, stun them, launch them into the air, and more. The game also lets you use his webs as conductive cables for some inventive puzzle sequences.

Miles Morales builds on the foundation of the original and delivers a gripping tale of family and friendship while making smart changes to the formula to improve and streamline the game. Miles ultimately delivers an experience superior to its predecessor despite its shorter length and lower price point. If you’re a fan of Marvel, superheroes, or just good ol’ fashioned teen drama, you owe it to yourself to check out Spider-Man: Miles Morales.

Nathan Post is a former JET from California who now works as a professional game translator for Gumi in Tokyo. When he’s not gaming, he can be found roaming the streets of Saitama in a virus-free plastic bubble. 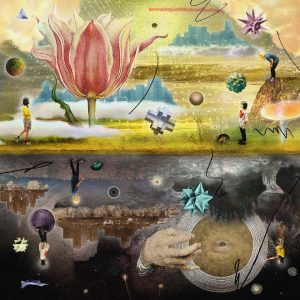 On their latest EP, the World, indie/pop-rock trio Regal Lily explore new, wilder sounds. Experimentation is evident on each of the four tracks when compared with their previous releases. The underlying pop song structure remains, but they’ve allotted space for less conventional sounds which overlay the core of the songs. The result is satisfyingly familiar and intriguingly abstract at the same time.

In the past, Regal Lily has stuck by a fairly simple pop-rock sound softened by lo-fi indie tones throughout. the World showcases the band building bigger, more epic songs which travel from low to high energy and quiet to loud. 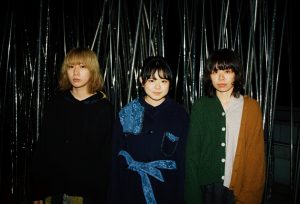 Just four songs and 14 minutes and 10 seconds, the World is a short EP with zero filler. The lead-in track, “東京” (Tōkyō), initially feels like a step into past works, but reveals it’s post rock influence towards the end. Two-thirds of the way in, things get chaotic, the tone turns darker, and guitar and drums mix for a flurry of sound. “地獄” (Jigoku) relies on dissonance and speed to instill discomfort before a sudden switch to a happy and bright chorus. “天国” (Tengoku) kicks off with a mysterious flanged guitar riff backed by an odd rhythm that’s hard to follow. However, it abruptly shifts into a standard four-chord rock song with an upbeat feeling that’s easy to bob along to. Unexpected songwriting choices like this have given Regal Lily’s sound new life, avoiding the pitfall of re-releasing the same album. “天使と悪魔” (Tenshi To Akuma) is a softer, more emotional track that ends with a bang, and a suitable way to end the EP. It builds upon itself throughout and is constantly changing, making it difficult to anticipate where it will go next. The complexity is captivating; boredom is not a possibility.

Lyrically, these songs are ambiguous and somewhat cryptic. To the non-native speaker, the Japanese can be challenging to grasp, but are well worth the time to try or at least look up a translation. The music itself transcends the lyrics and for that reason, can still be appreciated by anyone who enjoys lively indie rock. As a whole, the World is a compact set of tracks that sounds massive despite the short run time. In just over 14 minutes, Regal Lily runs through peaks, valleys, warm days, and darker nights. The end result is an EP that’s quite unpredictable and highly enjoyable. It’s fair to say that Regal Lily has crafted something new here, and there’s room to expand it even further.

You can stream the World on Spotify and Apple Music.

Ryon Morrin is a second-year Assistant Language Teacher from the U.S. living in Shintotsukawa, Hokkaidō. He’s a writer, a traveler, and a lover of live music.

Recommended Novel: Before the Coffee Gets Cold by Kawaguchi Toshikazu, translated by Geoffrey Trousselot 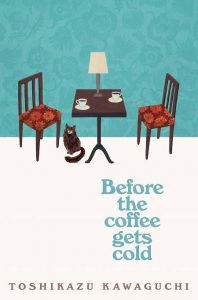 A small, unassuming café on an unassuming Tōkyō street—an apt setting for this un-assuming novel by playwright and author Kawaguchi Toshikazu. A story about time travel with seemingly arbitrary and specific rules, things left unsaid, and hopes for resolution. Before the Coffee Gets Cold is a story in four parts focusing on four different experiences of time travel in Cafe Funiculi Funicula.

Adapted from a stage play script and origin-ally released in Japan in 2015, the novel saw success enough to receive an English translation in 2019. Since then it has gained popularity in foreign markets with a mixed-to-positive response. The premise is sweet and relatable: “What if you could go back in time and get a second chance with a loved one lost or a connection missed?”, a question that everyone has no doubt considered at least once in their lives. In Cafe Funiculi Funicula that’s possible by sitting in one specific seat. There are, however, many rules to abide by—the most important of which is that you must finish your business, and your coffee, before it gets cold. . . .

The premise is intriguing and Kawaguchi does a good job at weaving four stories together throughout the book. It’s a pleasant read, with even pacing that maintains your interest through each section while pushing the overarching story forward. Although the characters can feel a little superficial in their personalities and motivations, the way that they interact with each other, especially in context with the time travel feature, is what I believe had made this novel so popular.

Occasionally the shift of medium from stage to book can be felt, unfortunately, with some characters feeling like they would shine better in the context of a play. The ghost woman stuck in the time travel seat throughout the story, for example, would be a fantastic role for an actor to bring to life.

Overall, the motivations for each character to time travel are compelling—one wants to confront a lover, one to speak with her husband who is battling dementia, one to see her sister one last time, and the final wants to meet her daughter. It’s easy to find empathy for them and each vignette of the past feels like a secret shared with the reader.

In my personal experience, some Japanese-to-English novel translations can be overly complex in their language use, making them difficult to parse for casual readers. Whether this is a result of more literal translations or a desire to keep these works as close to the originals as possible, it is not a problem encountered in Before the Coffee Gets Cold. One could argue that the writing style is simplistic, but it is my opinion that this simplicity makes this novel more accessible and enjoyable.

The English translated version of Before the Coffee Gets Cold is available at any of your usual online book retailers. If you’re nihongo jouzu (good at Japanese) I’m sure you can find the original text at any normal Japanese book store. Give it a read and let me know how it is in its original language!

Damien is a third-year JET in Tōkyō and the Assistant Editor for CONNECT. He is embarking on a reading challenge in 2021, focusing on novels writing by BIPOC (Black, Indigenous, and other People of Colour) writers.