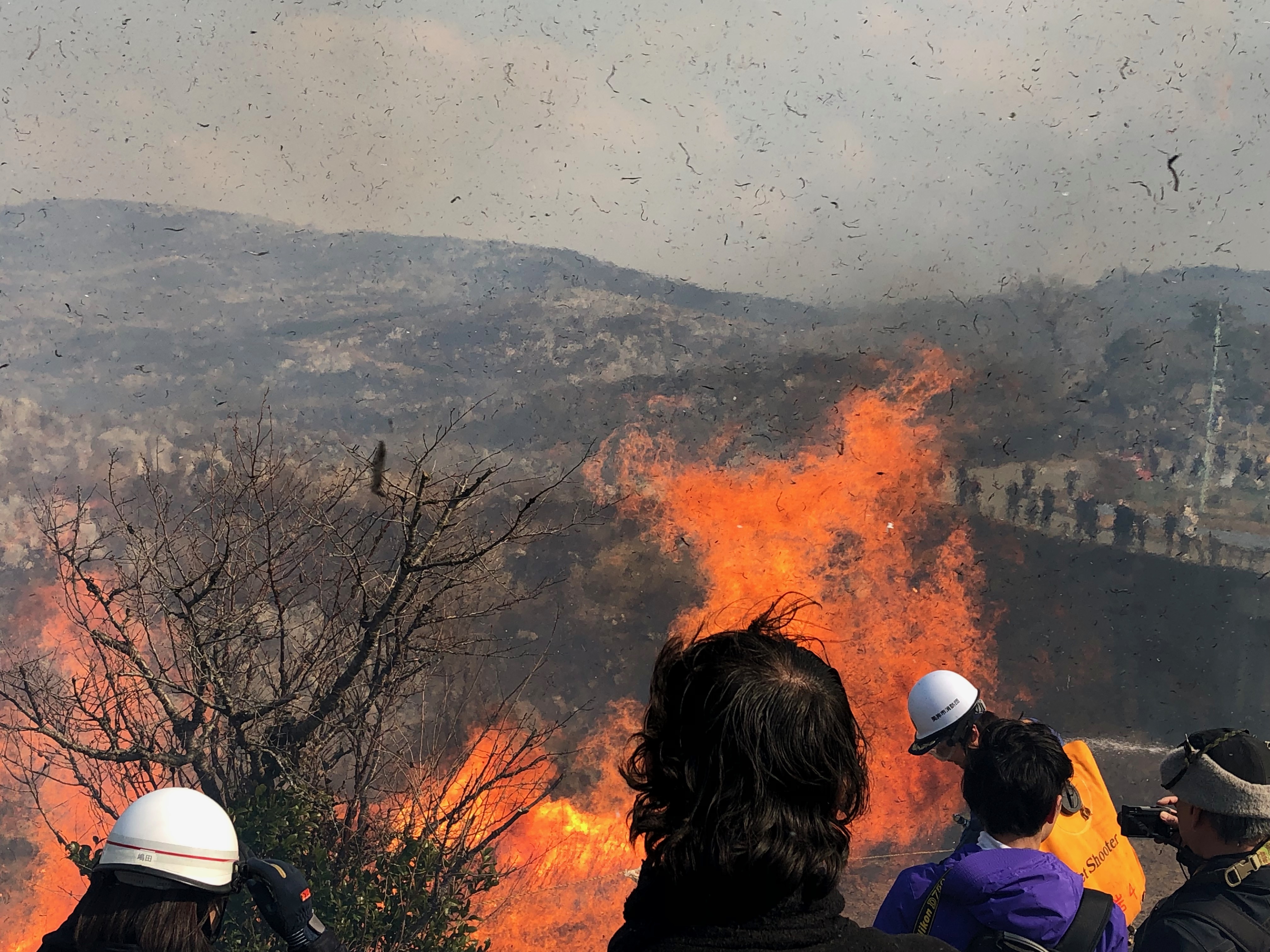 On the third Sunday in February, one of the coldest areas in all of Yamaguchi suddenly becomes the hottest place in the prefecture. Once a year, the lush fields of the emerald green Akiyoshidai Karst Plateau are set aflame as part of a ceremonial burning that dates back over 600 years. In the past, the burning of the fields was simply done for agricultural purposes. During the ancient times, farmers used the plateau as a place to grow their crops. The fields were burned to promote soil health and a bountiful harvest for the next year. It is said that this field burning is the largest in all of Japan. 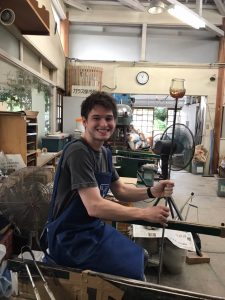 On the day of the burning, locals and tourists gather around the viewing platform in the heart of Akiyoshidai. The morning air is still tinged with the chill of winter as people mull about. Even the once-green fields have now taken on their sandy brown winter coats. Usually winter isn’t the best time to visit the plateau, but the day the burning takes place is a rare day. Inside a nearby cafe, people sip hot coffees and enjoy the warmth. The cafe also offers a nice view of the plateau, along with some fossils and other relics that have been reclaimed from the many pitfalls that dot the fields of Akiyoshidai.

Others outside the cafe vie for the best spot to stand and watch the spectacle while elementary school students in green happi coats set up their taiko drums. A few kilometers away, local volunteers stand at the ready with their fire starters. Trails have been cut out of the tall grass to help guide the flames. These snake around the viewing area and main road. After a few words from town leaders and organizers, the students begin their performance. Following a deep shout, the students start pounding on their drums. The students at the front hammer away at a large piece of bamboo, letting out a loud cracking sound. The students’ movements emulate the flowing green of the plateau’s grass in the wind. As the boom of the drums starts to reach a crescendo, a sleight of hand reveals red ribbons tied to each of the students’ drumsticks. The swinging motions create an illusion of crimson flames streaking across the green coats. Slowly, the crisp aroma of burnt dry grass begins to waft across the valley and up to the viewing platform. Dark puffs of grey brown haze lazily rise from the distant hills. 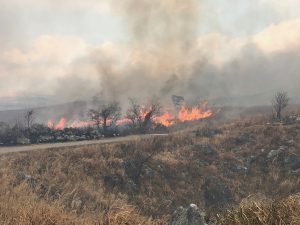 As the performance finishes, fire starters move into the patches of grass nearest the viewing area and slowly start to light it up. The dry winter air has kept the grass parched, meaning even the smallest sparks will cause combustion. Onlookers watch and gather around the nearest fire starter, getting as close to the action as the barrier ropes will allow. After several minutes, the flames from across the valley have made their way to the hills by the viewing area. The bright red and orange conflagration roars down the hills toward the viewers. From afar, it appears as though the hills are being dyed in black ink as the dark color of the burned grass seeps into the sandy brown scenery. Back at the viewing area, the grass has become a massive bonfire. With the flames leaping up several meters, firefighters start to usher onlookers back farther toward the central platform. Even so, people get close enough to the fire to singe hairs and draw sweat. Black smoke covers the clouds, turning dawn into an instant dusk. Black and grey ash fall from the sky, mirroring the snow that fell just weeks before.

After an hour or two, the crowds start to disperse and return to their vehicles. Only those who want to see the burn reach completion stay. At this point there isn’t much left of the former scenery. Even once the burn has finished, the ash continually falls, lightly blanketing homes from Mine all the way to Yamaguchi City. If given the chance, the Akiyoshidai burning is well worth the time. The experience is very unique in its sense of danger and dark excitement. Those planning to attend the event should take note that the event can be cancelled at a moment’s notice for inclement weather or other happenings in the plateau.

Mack Kellas is a direct hire ALT who has been living and working in Mine City, Yamaguchi Prefecture for the last five and a half years. He enjoys making pour-over coffee and collecting sneakers. Most of his days off are spent playing video games and hanging out with his wife.