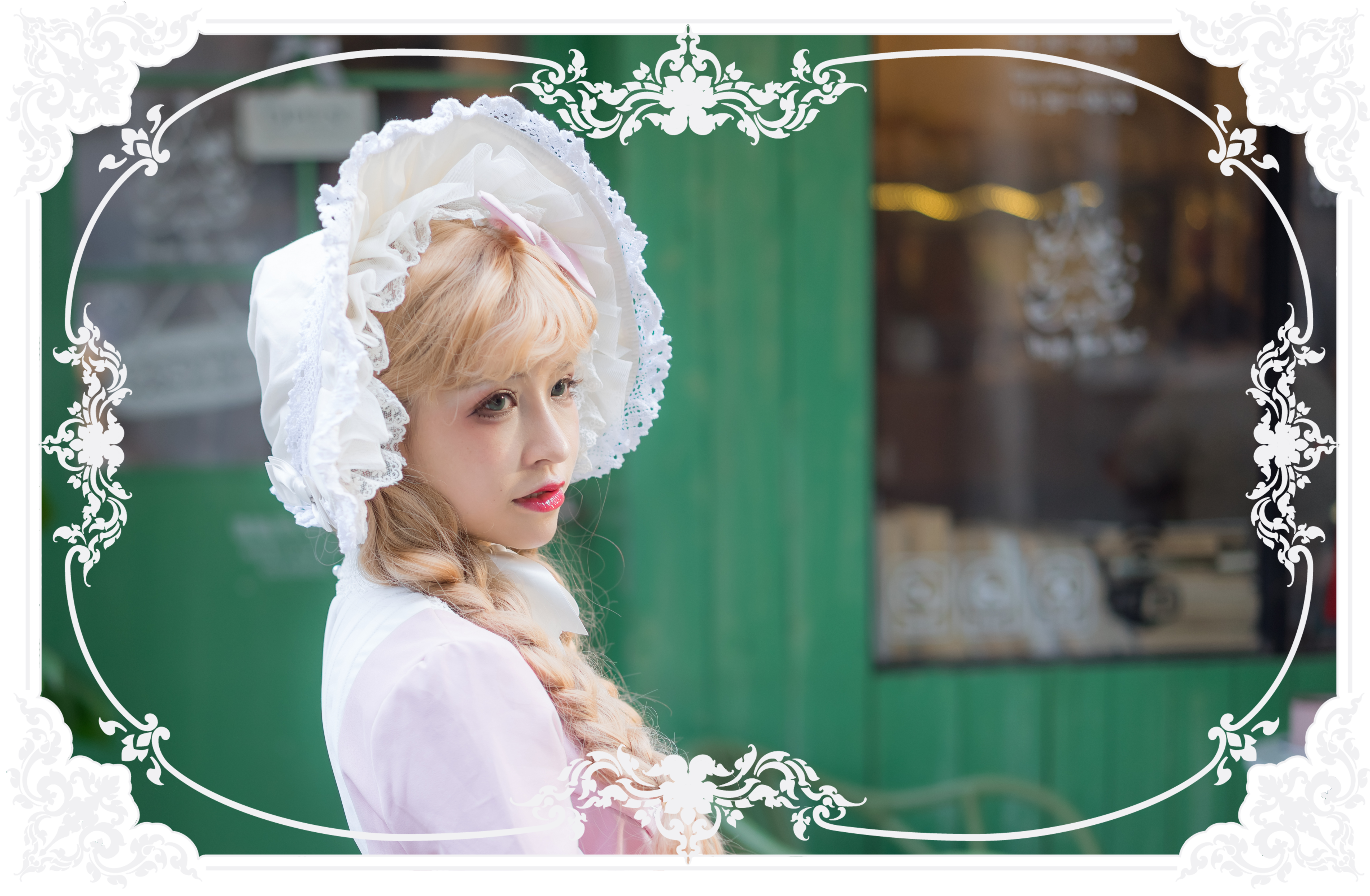 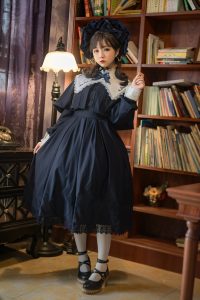 OK, hands up—who else had their first exposure to Japanese street fashion via Gwen Stefani’s ill-advised “Harajuku Girl” backup dancers, circa 2004? I cringe now, but as a 13-year-old unfamiliar with concepts like cultural appropriation and racial fetishization, I was intrigued. I’d had precious little prior exposure to Japanese culture—my hometown of York, UK probably didn’t even have a sushi restaurant back then—and now I was falling fast down a Google rabbit hole of Harajuku fashion photos. Of course, I was far from the first gaikokujin to fall in love with mid-2000s Japanese street style—its distinctive subcultures are world-renowned.

These subcultures have waxed and waned in popularity as trends anywhere do—but perhaps the most enduring has been Lolita. Characterized by the sorts of petticoated dresses you might otherwise have seen only on porcelain dolls and more ruffles, ribbons, and lace than you can shake a stick at, this style takes inspiration from Victorian and Rococo (think Marie Antoinette) fashion and combines it with a cutesy, childlike aesthetic. Historical accuracy is never the goal; we’re talking pure romantic fantasy here, dreamy ideas of aristocratic femininity and old-timey innocence.

Lolita might be ostentatious, but it is not a costume, and whether handmade or store-bought, high quality is the name of the game—you’ll find no cheap, shiny satin or fluffy cat ears here. In fact, Lolita comes with guidelines to follow if you want to avoid being labelled an ita—a pun on itai, translated as pain—and with several online communities poised to point out mistakes, it can be a notoriously intimidating subculture to newcomers.

That’s not to suggest that creativity and experimentation are discouraged—on the contrary, the list of Lolita variations is as long as your arm. The three most common substyles are classic (a more mature, subdued Lolita look, with longer skirts, muted tones, and subtle patterns), ama (as cutesy as it gets, with sugary pastel shades and childlike prints abound), and Gothic (incorporating traditional goth fashion; darker colors, heavier makeup, and spooky motifs), but Lolita divides even further to include:

5 Guro-loli – more common in photoshoots than in public, this substyle juxtaposes the sweetness of Lolita with horror-inspired fake blood and medical supplies.

6 i – incorporates traditional Japanese clothing into Lolita co-ords. You might see kimono adapted for a petticoat, and zori or geta shoes. Related is Qi-loli, Chinese-inspired looks.

Lolita is, typically speaking, associated with cultivating a highly feminine look, but that doesn’t mean that there aren’t options for those inclined to more masculine attire. Kodona, or ōji-loli, takes its inspiration from Victorian boys clothing, featuring short pants or knickerbockers, waistcoats, and newsboy caps or bowler hats. 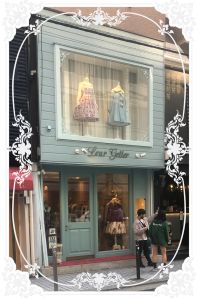 Once Upon a Time

According to Mariela Nikolic of Savvy Tokyo, the Lolita style was so named in 1987 by fashion magazine Ryuko Tsushin. (1) The style itself, however, can trace its beginnings back to over a decade earlier.

The late 1960s/early 1970s saw the first seeds of the eventual Lolita look sown with the emergence of kawaii culture and natural kei fashion. Natural kei, also the ancestor of modern-day mori kei, was inspired by a revival of Victorian aesthetics, featuring frilled floral dresses that wouldn’t look out of place in an episode of Little House on the Prairie. This aesthetic contributed to a romanticized cultural image of shōjo, “young women”, as socially free and unencumbered by obligation and responsibility but, for the first time, also now consumers in their own right thanks to social changes of the period. The earliest Lolita brands, Milk and Angelic Pretty (then named ‘Pretty’), were established at this time.

The 1980s saw more Lolita stores open their doors, including cornerstone brand Baby the Stars Shine Bright, Jane Marple and HeartE, but it wasn’t until the rise of visual kei music in the 1990s that Lolita, as we know it today, began to take shape. Early 90s Lolita looks were far simpler than the elaborate outfits of today, with nary a petticoat or bonnet in sight. Then came Malice Mizer in the late 90s, whose frontman Mana was key in solidifying the modern Lolita look and inspiring the emergence of Gothic Lolita. Mana’s clothing line, Moi-même-Moitié, is still highly influential in the subculture.

Lolita’s popularity skyrocketed in the early 2000s. 2001 marked the first publication of The Gothic & Lolita Bible, a magazine still seen to this day as essential reading for any Lolita devotee. Then came 2002’s release of Takemoto Novala’s novel Shimotsuma Monogatari (known in English as Kamikaze Girls) about teenage Lolita Momoko’s friendship with yankī girl Ichigo. A live-action adaptation swiftly followed. Girls worldwide clamoured to replicate Momoko’s style, cementing Lolita in the public eye as a mainstay of Japanese street fashion.

Dolores on the Dotted Line

As a subculture intent on cultivating an image of innocence, you might imagine it to be controversy-free. Lolita, however, is plagued with misunderstanding from the wider public; largely thanks to the name, which has sinister, Nabokovian connotations to Western ears. The 1955 novel Lolita is the notorious tale of a middle-aged man’s sexual obsession with his 12-year-old stepdaughter Dolores, aka Lolita.

That the childlike fashion shares its name with the eponymous character leads some to question the wearers’ intentions; assuming that pandering to pedophilic fantasies is the goal. This assumption is, of course, universally rejected by Lolitas. With the exception of ero-loli (a now dead substyle in which the traditional Lolita look is sexed up with fishnet stockings, corsetry, and more skin on show), Lolita fashion is markedly non-sexualised. Many wearers even express relief at the freedom from sexual attention that Lolita offers them. Teresa Younker, in her 2012 essay “Lolita: Dreaming, Despairing, Defying,” disputes any connection between Lolita dress and ‘lolicon’ desires—stating that Lolita fashion expresses a confidence likely to put off predators, rather than entice them. (2)

If you’re interested, this article from blog, F Yeah Lolita, discusses the etymology of the fashion’s name and its connection to the novel further. One thing’s for certain—if the name did come from the novel, there is no intent to emulate the titular character through dress or behavior. Even a rudimentary Google search for 1940s American teen fashion proves that the sartorial tastes of Dolores Haze would have been a far cry from the frilly Victorian confections favored by modern-day Lolitas.

Since pandering to deviant sexual interests is decidedly not a motivation for donning a petticoat, what is? Does personal taste alone drive the desire to dress in frills and ruffles?

Of course, aesthetic appeal plays a big role—Lolita is cute. It’s about as cute as fashion gets, and, to state the obvious, kawaii things are pretty damn popular in Japan.
But Lolita also offers a chance to escape the realities of adulthood—and the rigid social expectations it brings with it. Pressures to work hard and conform start as early as junior high school and only become weightier from there. Is it any wonder, then, that so many young people take solace in the return to the freedom of childhood?

Lolita fashion, despite the sweet and innocent image it projects, is a form of rebellion. Its extravagance is self-indulgence—an unwillingness to concede to societal ideals for behavior and beauty. As Momoko says in Shimotsuma Monogatari, “[C]hoosing things with your own personal sense of ‘“I like this, I don’t like that’” is the ultimate individualism.” (3) Lolita bucks beauty standards, both Japanese and Western, and the poofy silhouettes and modest coverage make it an appealing option for many girls who feel excluded from mainstream fashion for reasons of body type or disability.

It’s true that Lolita has been declining in recent years, with a number of online articles decreeing it “dead”—alongside the other Harajuku subcultures of yesteryear. Indeed, if you’ve recently made a pilgrimage to Takeshita Street hoping to see people wearing the wild fashions that captured your imagination as a teenager, you were probably as disappointed as I was. The Gothic & Lolita Bible went on what looks to be a permanent hiatus in 2017, with Harajuku streetwear magazine FRUiTS along with it.

A quick gander into any Lolita-related hashtag on social media, though, shows an international subculture alive and kicking, if smaller than before. After all, if escapism is the motivation behind Lolita fashion, when have young people needed that more than amidst the stresses of 2020? Lolita is a return to a romanticized, simpler time of life; a fantasy of innocence and freedom in fabric form. I, personally, don’t see that appeal ending any time soon.

Rhiannon is a third-year JET originally hailing from York, UK. She graduated in 2016 with a degree in Costume Design & Making, a fact that still surprises her given how bad she is at sewing. She spends more time than is healthy in Osaka’s vintage clothing stores, and also enjoys graphic design, drawing, and traumatizing herself with horror movies.