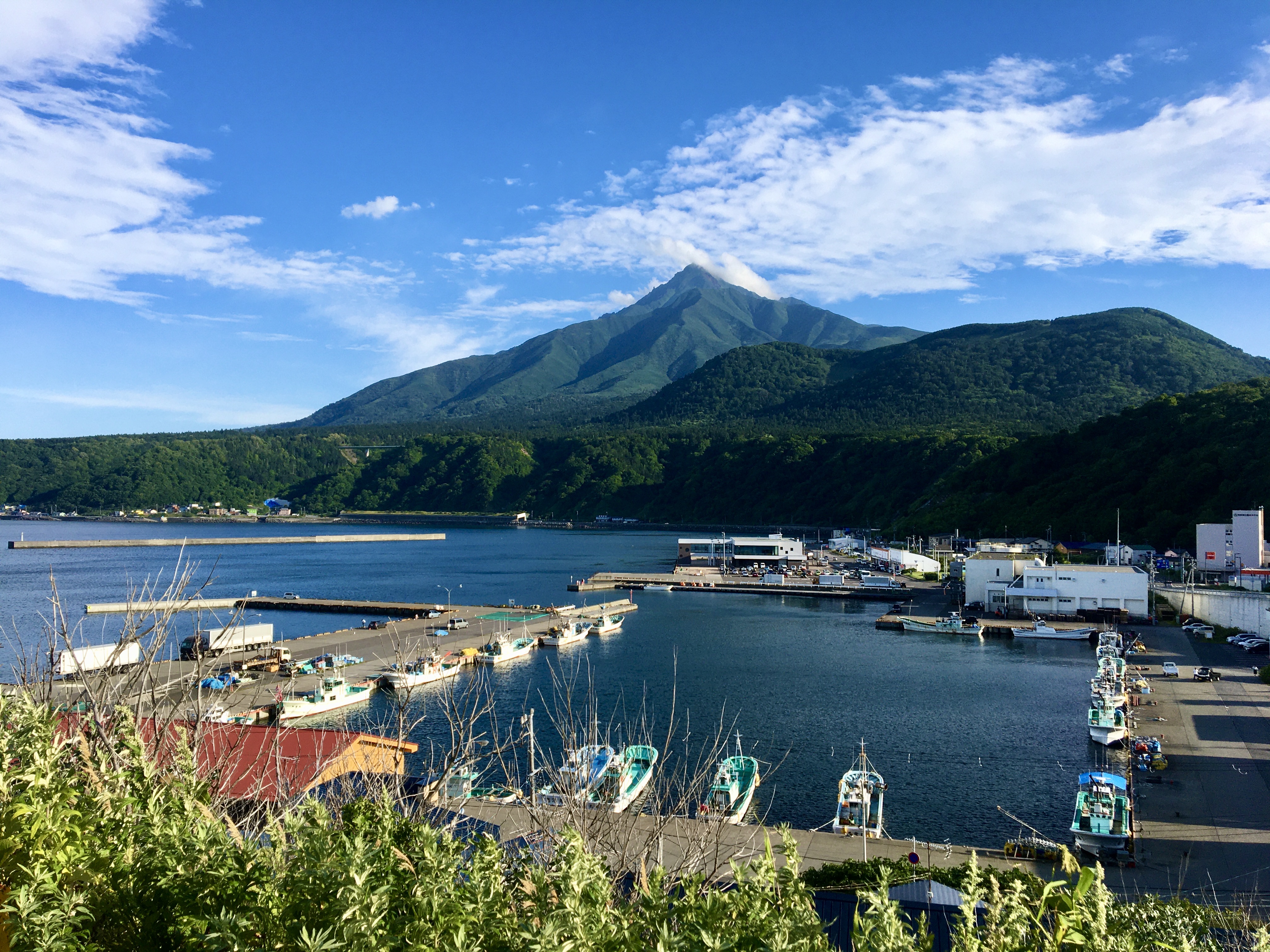 Sitting in my town office on the first day of summer vacation, I realized it was the day I had planned to travel to Tokyo for the Olympics. After seven months of suppression, my adventure bug no longer wished to lie dormant. However, living in a pandemic, I recognized the necessity of abiding by social distancing guidelines. This is how my plan for biking to the northernmost point of Japan came to fruition.

“Is it okay if I visit Hokkaido next week? I am going to travel by 自転車 (jitensha) and camp the entire time,” I asked my supervisor.

“You mean 電車 (densha)? Sounds a bit risky,” he responded, assuming I mispronounced the word for train.

“No, no, 自転車,” I said, stressing the ji. Others in the office looked up, and once more, I was corrected,

“No, with my チャリ (chari), I want to bike to Wakkanai.” I used the slang word for bicycle as I acted out riding a bike. A moment of silence passed as my office looked at me quizzically, during which I explained my intent to bike-pack Hokkaido.

I planned to complete my 10-day trip without the use of public transportation (besides a couple of ferries—I’m a good swimmer, but not that good) or hotels. I arrived at the port of Tomakomai around 6 a.m., and as I rolled onto Hokkaido, with no concrete plan aside from the goal of reaching Cape Soya, I had one thought on my mind: I had ten days—how hard could it be?

My first day gave me quite the cycle for my money. I first headed east to Noboribestu to visit Jigokudani, or Hell Valley. Having never bike-packed before, I took my time getting acquainted with my loaded bicycle. After a quick foot dip in the famous Oyunuma River natural footbath, I felt eager and energized and decided to continue to Lake Toya for the night. I took the most direct route to get to the lake, which cut through the mountains.

Rookie mistake #1: overestimating my ability, or, as I prefer to say, underestimating the difficulty of the terrain.

I started ascending the road, going slow but steady. 15 minutes turned into 30, then an hour, and the incline kept growing steeper and the road windier. My legs soon turned to jelly, I conceded defeat, dismounted my bicycle, and committed to walking up the rest of the mountain, which at this point felt vertical. Soon, my weak arms were also on fire, and I largely contemplated turning around, but my stubborn self wanted to retain some degree of pride. Luckily, cars on this route were thin, limiting the number of people who witnessed this pitiful sight.

Finally, after what felt like summiting Everest, I reached the top. I walked over hoping for a nice view, but as I approached the look-out, a downpour began. Not just a shower, but the type of run-to-cover rainstorm with ferocious raindrops that sting when they hit you. I quickly strapped on my poncho and thought ‘at least it’s downhill from here.’

Rookie mistake #2: not having adequate, or really any, rain gear.

What I didn’t think through was the physics of wearing a poncho while racing down a windy, slippery hill. Between the rain washing sweat into my eyes and obscuring my vision, my poncho turning into a parachute, my feet slipping and the pedals whacking into my shins (rookie mistake #3; not having clip-in pedals), and puddles spraying dirty road water up into my face, this was definitely not the idea of fun that I had envisioned. Nevertheless, I made it to the lake. Never have I appreciated the warmth of an onsen so much in my life. The rain let up briefly for me to pitch my tent and promptly fall asleep. The nice thing about exhaustion is that you don’t have the mental energy to worry, or even think about, the future and how many more miserable, mountainous rain encounters lie ahead. I was just happy to have survived day one.

The following days were much more enjoyable, albeit still filled with some unfortunate weather. In six days, I cycled up to the northern town of Wakkanai, averaging about 150 km a day, often waking up before the sunrise in an attempt to beat the rain. Spoiler alert: mother nature won every time. From Lake Toya, I passed through Lake Shikotsu and Chitose, then spent a day soaking in the beautiful lavender-smelling flower fields of Furano and admiring the pristine blue lake of Biei. From there, it was a fairly straight shot north through endless fields of rice and corn. I was warned by many that this section of Hokkaido is ‘boring.’ Though the terrain and landscape aren’t the most diverse, I find rice paddies to be one of the prettiest parts of the Japanese countryside. I also feel slightly indebted to the rice fields due to the sheer amount of rice I consume daily, so it feels unfair to belittle them.

On my fifth day, I was enthusiastically greeted by rain again in Otoineppu. Accepting that it wouldn’t let up in the foreseeable future, I set to work pitching my tent next to the one other soul braving the weather. A kind man emerged to assist me and pointed out a small splinter in my tent pole. It hadn’t caused me any trouble thus far, so I ignored it and took refuge from the rain. 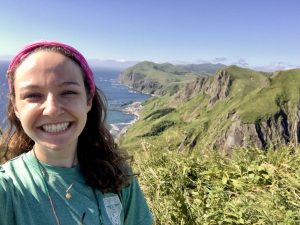 Rookie mistake #3: not carrying duct tape, which fixes everything.

At about midnight, the wind picked up, and I awoke to my tent feeling like the big bad wolf was outside huffing and puffing, and then yes, blowing my tent down. A huge gust caused the splintered pole to snap, and my tent began flooding with water. Luckily, an awning that offered about half a meter of rain coverage stood not too far away. I hadn’t sprinted that hard since high school basketball drills.

My misery was quickly overshadowed by victory when I reached Wakkanai the following day. My final destination of Cape Soya was still 30 km further, but I decided to first detour to Rishiri and Rebun islands. Rishiri Island boasts a volcano, lovingly referred to as Rishiri Fuji, which is the icon of the popular Shiroi Koibito cookies. The volcano steals the spotlight and is even prettier up close; however, it was Rebun’s unanticipated rugged beauty that stole my heart. With the best weather of my trip, a stunning view of Mt. Rishiri, dramatic cliffs that felt like the Scottish Highlands and bright green vegetation everywhere, Rebun is a nature lover’s dream. As I settled into my campsite that evening, I remembered the meteor shower set to occur that night. With minimal light pollution, the sky looked like a planetarium. For the next hour I lay with my head poked out of my tent, marveling at the brightest shooting stars I have ever seen, surrounded by the sound of laughing families and the smell of sizzling barbeque meat, feeling the good sensation of tired muscles from a day of use. It was in this moment that all the hours of wet, windy cycling and tent mishaps became worth it.

Upon returning to Wakkanai, I battled the gnarly winds that frequently plague the coast, snailing my way up to Cape Soya. I didn’t have big expectations for what reaching the “finish line” would feel like, but this probably ranks as the most anticlimactic finish to anything I’ve ever completed. I took a picture, spent a few minutes hoping to catch a glimpse of Russia (she was being quite shy), and then got back on my bike and started pedaling my way back down south.

Hokkaido was a challenge, both physically and mentally, but it was also without a doubt one of the best travel adventures I’ve had. It wasn’t the arrival at the northernmost point of Cape Soya that left me feeling triumphant, but the simple moments throughout the journey that evoked the most joy; the sun peeking out after a storm, a thumbs up from a motorcyclist or “頑張って” from a driver as I crawled up a steep hill, a soak in an onsen after a day of riding, the man who helped me pitch my tent in a downpour, stumbling upon a sunflower field in the rain, or my shoes finally drying after being wet for 2 days straight. Bike-packing Hokkaido allowed me to be present, without regular daily distractions, and develop a deep appreciation for the stunning beauty and kindhearted people of Hokkaido, Rishiri, and Rebun islands. It was a welcome reminder that slowing down can be a powerful tool to connect with yourself and cultivate gratitude for the small things that we often overlook in our busy and stressful lives.

Regan McAllister is a 2nd year ALT in Rokunohe, Aomori. Having spent 7 years of her childhood living in Tokyo, she is enjoying the opportunity to experience a new region of Japan as a working adult. A nature enthusiast, she spends her free time running, hiking, cycling, skiing and partaking in just about any other outdoor activity. She also enjoys eating copious amounts of ramen, reading about the world and planning for her next travel adventure.