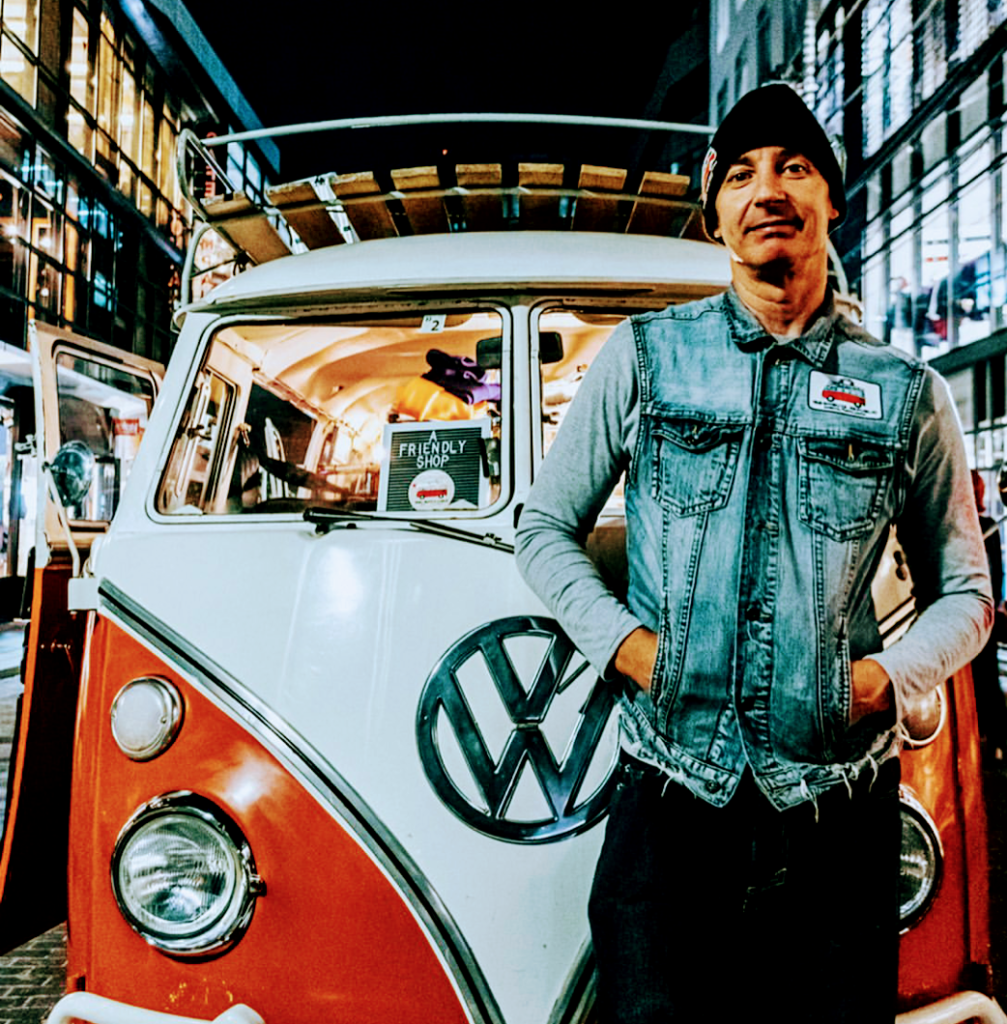 Anyone who’s spent time in Shibuya-ku may have seen a red Volkswagen Bus from time to time, driving around or parked in high-traffic areas of the trendy ward. The bus belongs to Bruce McCullough, and serves as the boots-on-the-ground face of his new fashion venture, Shibuya Republic. Bruce, however, has a much bigger portfolio than just a VW. When he arrived from Canada some twenty years ago, he never imagined he’d end up where he is today: managing almost two dozen properties in both Tokyo and his hometown of Vancouver, running his own fashion brand, and all-around enjoying life with his two children and wife in their beautiful home in Shibuya. After graduating from Simon Fraser University in Vancouver with a degree in economics, Bruce spent the first part of his twenties as an entrepreneur, first selling cars and then starting his own nightclub/restaurant, Ankor, with friends. The nightclub eventually went bankrupt, but Bruce remained undeterred, and if anything, was enlivened by the failure of his first foray into hospitality. Bruce came to Japan soon after and began teaching at a private high school, where he would remain for the next fifteen years, all the while gradually amassing his own portfolio of condominiums and apartments in the Tokyo metropolitan area. By the time he finally left teaching, he had gained not just a monthly cashflow from his properties that dwarfed his teaching salary, but also permanent residency status in Japan.

How exactly did you get in the real estate business?
There’s nothing super unique about it. Back when I was in Vancouver, I was running Ankor [the Nightclub] with my buddies, and we were making money, sure, but the thing was, the rent was so damn high for the place. We finally had to close it because of that, but it made me realize that if you don’t own your own property, you’re wasting your mental energy and time. I came to Japan on a working holiday visa and about fifteen grand Canadian and started teaching at the high school. The good thing was, over the fifteen years I ended up working at that school, I was buying up properties in the area, and by the time I got downsized, I was making way more through my rentals than at the school. The school knew that, and pretty much told me, “Hey, since you’re doing well enough without us, would you mind if we didn’t renew your contract?”

What has been the biggest joy of your work?
I got to say it’s just the freedom it allows me. But I also am getting to learn a ton of new skills I never had before, I mean when you’re managing so many places you have the right skills, carpentry, plumbing, etc. I’ve really become a tradesman in the second half of my life, and it’s been great. But I also love making old places look fresh and new, you know, breathing a second life into them. I just get excited about real estate, from finding the places to polishing them up and finally to renting them out. It’s all a joy, but, for sure, the freedom of not having a boss or being tied to a single company is great. I love working for myself.

How about the biggest challenge? What’s that been?
There’s always things, you know? I believe in Murphy’s Law, you gotta plan for the worst but expect the best. Something always can always go wrong, but if you’ve done your work you’ll always come out alright. Coronavirus has definitely been tough, more so for Shibuya Republic [the fashion brand]—I mean the economy’s been just so wrecked by the virus. Fortunately I’ve only lost one renter, and was able to replace them soon enough after a couple of weeks. But, you see, that’s the good thing about working for myself and owning my own properties: if something goes south I know I’ll always be able to land on my feet. If you’re tied to a single workplace with a single income source, you’re taking a huge risk. At least, you’re able to own your own places, you’ve got more of a safety net. I know not everyone’s got that luxury, but that’s the reason you’ve got to start building some equity before it’s too late.

Are there any resources you’d recommend for people wanting to get into the real estate business?
Like I said, you just got to start somewhere; size doesn’t matter. I didn’t exactly grow up with money,
and it was only by working hard and keeping my eyes forward that I got to where I am today. I’m just a regular guy at the end of the day. I started by saving up enough just to buy my first place, and then I moved out, rented it out, and went to the next one. After fifteen years of doing that it created a base to let me leave teaching. It’s really that simple. Of course, having permanent residency definitely makes things easier, especially on the financing side. Banks are much more willing to give mortgages and what-not when you’ve got PR, so that would be the first thing I’d tell other foreigners wanting to get into the real estate business. ‘Course, if you got enough capital, it doesn’t really matter if you got PR or not, but if you were like me, and didn’t have a ton of free cash to throw into a couple of condos, you have to get a bank to give you the money.

Any other tips you’d tell someone?
You really don’t have to go post-grad these days, and overall I’d say yu have to really ask yourself if college is right for you. Coming to Japan, yeah, you’re going to need a four-year degree, but beyond that, I really don’t think it’s worth it. Compared to when I went to school in the 90s, information is a lot more accessible these days—a lot less centralized. Back then, the only place you could get information was the university library, that was the whole reason you went to college; you couldn’t get that info anywhere else. Today you got YouTube, Google and Kahn Academy. It’s all out there for free. But, in terms of real estate tips, like I said before, you got to learn how to do basic carpentry, plumbing and painting. You have to know what to look for in a property and be able to spot any red flags. Knowing what areas have growth potential is important in Japan, since a lot of places the real estate market’s kind of dead here. But there’s always opportunities if you look hard enough and are willing to put in the hard work. More generally, I’d say it’s really important to build multiple income streams, not just for real estate but for life in general. It’s all about mitigating risk. If the economy tanked tomorrow and all my renters moved out, yeah it’d be bad, but I’ve got enough other sources of income now that we’d (my family and I) be alright. That’s the freedom I was talking about before, if you got one job and one income source, you’re really putting yourself in a dangerous position. All it takes is one talk with your boss and you’re out.

What does the future look like for you?
I’m trying to grow Shibuya Republic at the moment, and we’re doing well there, despite COVID. But I’d really like to buy more properties in the American midwest at this point, especially in Milwaukee, for instance. There’s so many places in the midwest that are great buys right now in high-growth neighborhoods. I’d like to be able to split my time more evenly between Canada and Tokyo, especially now that my kids are getting older. They’re still in school, but I’d really like it for them to have the exposure to Canadian and American life. Hopefully, things in the world can return to normal soon enough, and I’ll be able to travel more freely. But again, you never know. Like I said: Murphy’s Law.

Bruce McCullough is a Canadian real estate developer and entrepreneur who lives in Shibuya, Tokyo with his wife and two children. His website is https://shibuyarepublic.org. You can also find him on Instagram @shibuyarepublik.